With mandatory recycling laws, the Earth has a good chance of becoming a greener world.

When I was younger, WALL-E came out in theaters. Although I enjoyed the movie’s theme of love and exploration, I did not realise until now that the movie conveys a different meaning. This new theme pertains to the future of the Earth, and how throwing away reusable resources can harm our future generations. Because the U.S. population increases every year, the scarcity of plastic and paper for the years to come has become a growing concern.

Don’t waste time
Get a verified writer to help you with Overview on Reduce, Reuse, Required Recycling
Hire writer
$35.80 for a 2-page paper

However, communities and businesses do not realize the amount of recyclable materials they are throwing away. For example, as reported by the Alameda County Waste Management Authority in 2014, “25 to 59 percent of the items in businesses’ garbage containers could have been recycled” (as cited in Biocycle, 2015, December, p.14). If the United States as a whole implemented mandatory recycling laws, the world could be one step closer to a greener future.

The United States itself does not have a mandatory recycling law; however, some states have implemented their own laws that carry our mandatory recycling. These laws are known as “bottle bills.” Eleven out of fifty states have bottle bills, which include California, Connecticut, Delaware, Hawaii, Iowa, Maine, Massachusetts, Michigan, New York, Oregon, and Vermont. Nixon and Saphores (2014, January) states that “recycling rates . . . are significantly higher in bottle bill states than in other states” (p.

2). Even though some states do not have mandatory recycling laws, this does not stop some cities implementing their own laws. Take Laramie, Wyoming for example, in which the city has taken multiple steps to divert waste. This movement started when a significant number of Laramie citizens were concerned about a possible injury to the environment in 2012 by the absence of glass recycling in the city. Ever since then, the volume of recycling materials collected in the City of Laramie has increased since the establishment of curbside recycling. In fact, according to Bom, Belbase, and Lila (2017), curbside recycling “increased from 414 tons in 2011 to 1358.78 tons in 2012, a 228.21% increase in the first year” (p. 11). The City Solid Waste Manager in Laramie, Wyoming believes that an educational policy is the most effective to increase recycling rates in the city. This can be by doing door-door campaigns, handing out pamphlets and posters. Educational seminars on the benefits of recycling are also a viable option. Elementary and high school teachers can also host recycling contest between classes. If other cities in the United States, like the city of Laramie, work together to promote recycling, the overall environment could be much cleaner.

Not only does recycling benefit the environment, but it also benefits the recycler. Many factors affect individual recycling behavior and attitude. The most important elements include motivations for recycling and the level of satisfaction. For example, the feeling of making a difference for the future is a great motivation for many people who want to recycle. A mandatory recycling policy could help spread this motivation.

Moreover, the importance of mandatory recycling lies with businesses, because they have to set an image for the future. If businesses realize the importance of recycling, customers and shareholders alike will share the same benefits of recycling. Businesses want to create a positive image of their company to attract loyal customers. One benefit of mandatory recycling, according to Bennet and James (2017), is the “reduction of environment-related financial risks.” This includes an accidental leakage of toxic waste into land or rivers. In return, this damages the reputation and public image of the business, and can change perceptions for local communities where the business is operational. A company’s sustainability is important to its investors, bankers, and insurers, but with mandatory recycling, businesses can stay in business longer with the reduction of environmental financial risks. Because a majority of countries in Europe have mandatory recycling laws, German and other European companies are less dependent for finance and place a greater interest from their employees, customers, and communities. Therefore, business owners in the United States should consider the benefits of eco-efficient or eco-friendly products or services.

The final benefit of mandatory recycling is financial benefits for the government. Like most programs, recycling comes at a cost. In order for trash collection programs to work, for example, expensive trucks are needed. Furthermore, haulers must pay to dispose trash at landfills. On the contrary, recycling trucks, employing a staff to collect and process materials, and providing recycling carts or bins are only needed. In addition, the recycled material is sold in a package at a reasonable price. Recycling programs like these create employment, so which the government can collect more taxes. According to Podolsky and Piegal in “Municipal Waste Disposal: Unit Pricing and Recycling Opportunities” (1999, August), city waste disposal services, like mandatory recycling, effects “the municipal budget in two ways. First, the portion of the municipal budget for waste disposal services will be balanced as the users pay for what they consume. Second, total municipal expenditures on waste disposal will decrease” (Chapter 24). This means that city budgets for waste services will average to the price a person at which they will consume; as a result, waste disposal funds, such as trash collection, will decrease. Podolsky and Piegal further states that “implementing a unit pricing policy requires households to internalize the full cost of municipal waste disposal services in their consumption decisions.” The purpose of this is to show the direct interaction between unit pricing and recycling so that households become aware of the funding differences between disposal and recycling. Therefore, recycling becomes almost as a tax collected by the government, while also decreasing waste in landfills and increasing unit pricing for recycled material for a profit. 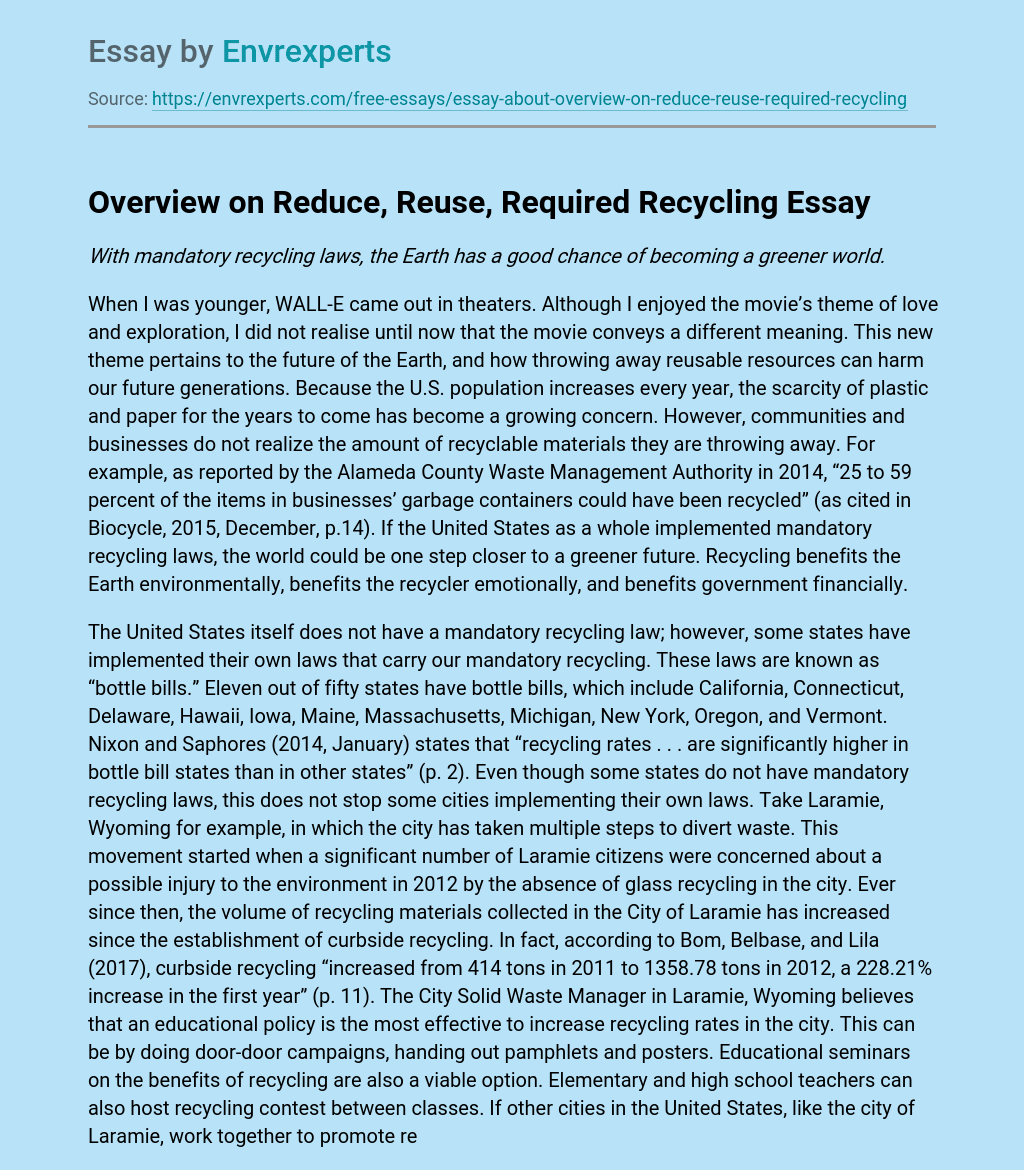