A Overview of Sewage and Garbage Treatment in New York City

You ever wonder where the stuff you flush down the toilet goes? Or where the water goes after you brush your teeth? Or whats under those manholes that has sewage written on it? What happens when you throw wasted in the garbage? You probably dont but all of the content that is discarded throughout the day gets sent to a sewage plant through the pluming system that is connected to your house. One major problem is how to get rid of the waste safely so that it does not disrupted the environment or hurt people or animals.

Don’t waste time
Get a verified writer to help you with A Overview of Sewage and Garbage Treatment in New York City
Hire writer
$35.80 for a 2-page paper

The major problem for the United States is waste water, the amount, and the cost of treatment and disposal. The United States treats over 1 billion tons of waste a year.

What is sewage you ask, the dictionaries defines sewage as; the waste matter from domestic, commercial, and industrial establishment carried off in sewers. When waste matter enters water, the resulting product is called sewage or wastewater.

Garbage is defined as; animal or household refuse Sewage is stored in sewers. Then treated or in a sense recycled. Raw sewage includes waterborne waste from sinks, toilets, and industrial processes. Treatment of the sewage is required before it can be safely buried, used, or released back into local water systems. In a treatment plant, the waste is passed through a series of screens, chambers, and chemical processes to reduce its bulk and toxicity. The three general phases of treatment are primary, secondary, and tertiary. During primary treatment, a large percentage of the suspended solids and inorganic material is removed from the sewage.

Problems with sewage and garbage management as been in existence for as early as the 1970s as a result of the general concern expressed by people that worried about the increasing pollution in the human environment. But it even goes further then that. Ancient people have been finding ways of resolving sanitation. An ancient sewer system was found in the cities of Crete and Assyrian. Towards the end of the Middle ages cesspools were developed. After these cesspools where filled. The wastes were used as fertilizer at nearby farms or were dumped into watercourses or onto vacant land.

Centuries later New York City is experiencing similar problems. New York City has a problem with waste storing its waste. Evidently there is no more room to put it. So New York is offering neighboring states to take its waste. And New York will pay these states on the dollar for the amount of garbage and sewage. A sewage treatment process commonly used to treat domestic wastes is the septic tank: a concrete, cinder block or metal tank where the solids settle and the floatable materials rise. This is one of the methods that New York City uses. But due to a surplus of refuse matter that comes in daily New York cannot treat all of it.

At my tour at the Riverbank State Park we learn that under the park is a sewage treatment plant. Its purpose is to purify the sewage so that is can be released back into the enviornment. My tour guide Mr. Williamson explains that the water contains solid particles, which mixed with the untreated water is called sludge. The sludge contains solid particles, like wood, dead animals, and trash that could cause problems later on, so they filter out all this stuff and send it to a land field. The system relies on gravity to move the sewage to the treatment plant. Since the plant is built underground 3 aerator pumps are needed to pump the sewage into the settling tanks. From there gravity pulls in toward the river. The first step in the actual treatment is mixing all the stuff up, releasing the gases and exposing the sewage to air. This process smells bad. It releases hydrogen sulfide, which smells like rotten eggs. From here the sewage enters long concrete tanks. Each tank is divided into two sections. In the first, air is pumped through the water. As the organic matter starts to decay, it needs oxygen. The aeration stages supplies it with this oxygen. The bubbles lets grit settle out. The grit is pumped out of the tanks and taken to the landfills. The water then enters its stage of sedimentation. Here the Sludge settles out and is pumped out of the tanks. Some of the water is removed for a stepped called thickening and then the sludge is sent into large tanks called digesters. As the sludge settles to the bottom, the lighter materials float to the surface. This is called "scum" This can include anything from grease and oil, to plastics and soaps. Slow moving rakes remove the scum off the water surface. The scum is thickened and then pumped into the digesters along with the sludge. Many cities use filtration in sewage treatment including New York City, Mr. Williamson. After the sludge is removed, the liquid sewage is ran through filters, usually sand, that removes all bacteria, reduces color and removes some of the odors, reduces iron, and removes any solid particles left. Another part of the waste water treatment is getting rid of the solidwaste material. The Solids are contained for 20 to 30 days in a large, heated and enclosed tank called a "digester." Here, Bacteria breaks down the material. This reduces the volume, odor, and destroys organisms that can cause disease. The product is then sent to landfills but also can be used as a high ammonium fertilizer. The final step in making the sewage safe is the chlorine tank. The water flows in the tank where the chemical chlorine is added to kill bacteria. The chlorine is mostly eliminated as the bacteria are destroyed, but sometimes a neutralizing chemical must be added. This protests fish and wildlife which could be killed with a same amount of chlorine. The treated water is called effuent. This is discharged to a local river or the ocean. Like the Hudson, Harlem river and East river.

A Overview of Sewage and Garbage Treatment in New York City. (2021, Oct 31). Retrieved from http://envrexperts.com/free-essays/essay-about-overview-sewage-and-garbage-treatment-new-york-city 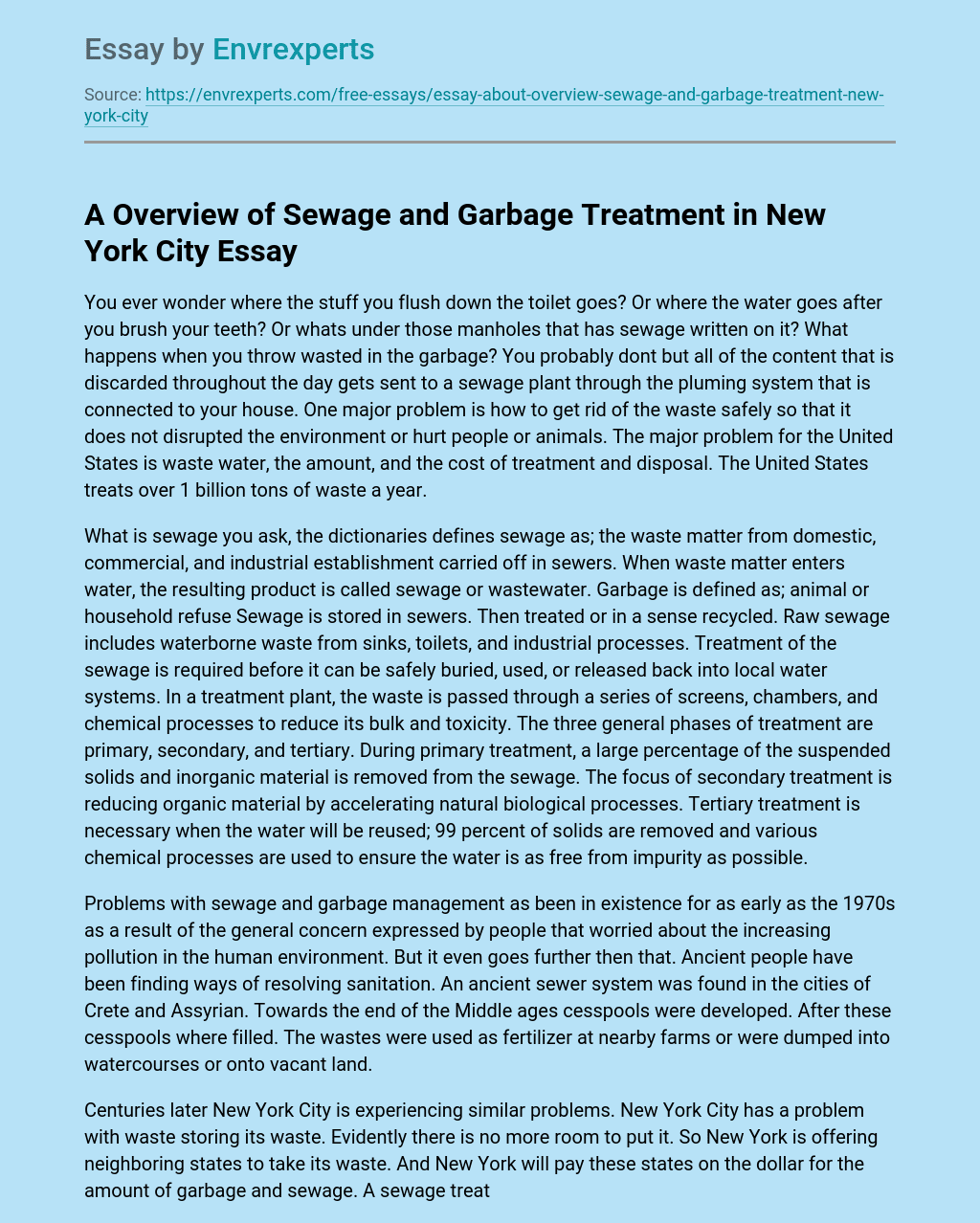