Ozon Layer and a Growing Problem of Depletion

The Ozone Layer: What does it do and what happens when it is depleted? The ozone layer is one of the most debated scientific subjects of the last decade. The growing problem of its depletion is being researched heavily all over the world, and methods are being researched to try and solve the problem. There have also been many debates concerning the relationship between the ozone layer and the onset of global warming. Before solutions can be developed, however, what the ozone layer actually does and what is causing it to be depleted must be understood.

Don’t waste time
Get a verified writer to help you with Ozon Layer and a Growing Problem of Depletion
Hire writer
$35.80 for a 2-page paper

The ozone layer is a section in Earth's stratosphere that sits between ten and fifty miles above the surface. The ozone layer is a protective barrier that exists between the life forms on Earth and absorbs the harmful ultraviolet-B raditation from the sun. This protective layer is essential in order for life to exist on the Earth. Ozone is a colorless gas that is formed by a chemical reaction of oxygen molecules, oxygen atoms, and solar radiation.

Contrary to popular belief, ozone is actually a greenhouse gas and the loss of it would actually decrease the global warming effect on Earth instead of increasing it (Introduction). Ozone in the stratosphere is beneficial to life on Earth, but ozone at ground level is harmful to living things. Ozone on the ground level is made by sunlight reacting with motor vehicle exhaust gases and is a major component of smog in major cities. (Green Lane).

In recent years, a large hole in the ozone layer has begun to develop over Antarctica during the spring season, and a smaller hole has been found over the North Pole as well.

A reduction in the ozone layer over the mid-latitudes has also been found, and the ozone layer over southern Canada has been reduced by an average of about six percent since the late 1970s, which is when human activities first started to cause changes in the upper atmosphere (Carver). These holes in the ozone layer can cause a variety of problems, such as allowing larger amounts of skin harming UV radiation from the sun to reach the ground. High exposure to UV has been known to harm humans, damage marine ecosystems, reduce crop yields, and affect forests. The most harmful impact for humans is the increase in skin cancers. High exposure to the sun's UV rays can also cause damage to eyes, including cataracts, and may possibly even weaken the immune system (Ozone Depletion Index). It has been found that some major food crops such as barley and oats have shown reduced growth as a result of exposure to increased UV radiation (Green Lane).

Marine life is also affected by this radiation. In marine ecosystems UV radiation can damage the tiny, single-celled plants which form the base of the food chain. Decreases in the food source at this bottom level may have effects throughout the entire food chain, and could eventually affect fish populations (Introduction). Decreases in the fish population would also affect life on land as well. Along with causing problems to life forms, increased UV levels also decrease the lifetime of building materials used outside such as the plastics that are common in homes, playgrounds, and other structures.

These holes in the ozone layer are being caused by chemicals that have been released into the atmosphere. The most common are chlorofluorocarbons, which are also called CFCs. CFCs were widely used in the 1960s and 1970s because they are stable, nonflammable, low in toxicity, and cheap to produce (Carver). CFCs became used as refrigerants, solvents, and in other smaller applications. These substances have atmospheric lifetimes long enough to allow them to be transported by winds into the stratosphere. Because they release chlorine or bromine when they break down, they damage the protective ozone layer. The harmful effects these compounds have on the ozone layer were not discovered until the mid-1980s, even though they were predicted several years before.

In the early 1970s, scientists started to investigate the effects of some chemicals on the ozone layer, particularly CFCs which contained chlorine. Chlorine from swimming pools, industrial plants, the ocean, and volcanoes does not ever reach the stratosphere. Chlorine from these places will combine easily with water, and experiments show that they rain out of the troposphere very quickly (U.S. EPA). However, CFCs are very stable and do not dissolve in rain, so there are no natural processes that will remove the CFCs from the lower atmosphere. The CFCs released are so stable that only exposing them to strong UV radiation is able to break them down. Over time, winds help force the CFCs up into the stratosphere where they begin to cause problems. Once these CFCs reach the stratosphere and are exposed to UV radiation, the molecules release atomic chlorine (Ozone Depletion Index). One chlorine atom can destroy over 100,000 ozone molecules. This process destroys ozone faster than it is naturally created, depleting the ozone layer. Large volcanic eruptions can increase the effectiveness of how chlorine destroys ozone as well.

Once these studies began to prove that CFCs were a problem, efforts to reduce the problem were formed very quickly. One of the first efforts was to ban on the use of CFCs as aerosol propellants in several countries, including the U.S. Despite this, however, use of these chemicals grew once new uses were found for them. In 1985, the Vienna Convention was made to secure international cooperation on the issue. Additional efforts resulted in the signing of the Montreal Protocol in 1987. The original protocol would have cut the production of CFCs in half by 1998 (U.S. EPA). Canada has been major contributor to ozone science by monitoring ozone levels and by researching the causes and effects of ozone depletion. Canadian research into the ozone layer actually began in the 1930s as an effort to understand the ozone layer's potential benefit to weather forecasting. This research was increased in the 1980s when decreases in ozone levels started to show. Because of measures were taken very quickly, emissions of ozone depleting substances are already falling. Assuming that this trend continues, stratospheric chlorine levels will peak in a few years and then slowly return to normal. The natural production of ozone will heal the ozone layer completely in about 50 years (U.S. EPA). Paul Fraser of the United States Environmental Protection Agency stated that the major culprit in the production of the ozone hole is CFCs and they have started to decline in the lower atmosphere. We think the ozone hole will recover by about 2050. We are now at a point where the atmosphere can actually remove CFCs faster than they are being released into the atmosphere. (U.S. EPA) Despite all of the controversy surrounding the ozone layer depletion issue, the scientific facts show that this problem is not as large as most people believe. The research also shows that ozone depletion does not actually have anything to do with the greenhouse effect and the increase in global warming. Actually it is just the opposite, as ozone depletion is shown to decrease the greenhouse effect. The largest problem is making sure that everyone follows the environmental regulations. All humans need to do is to stop destroying the ozone layer and it will cure itself as time goes on.

Ozon Layer and a Growing Problem of Depletion. (2021, Oct 31). Retrieved from http://envrexperts.com/free-essays/essay-about-ozon-layer-and-growing-problem-depletion 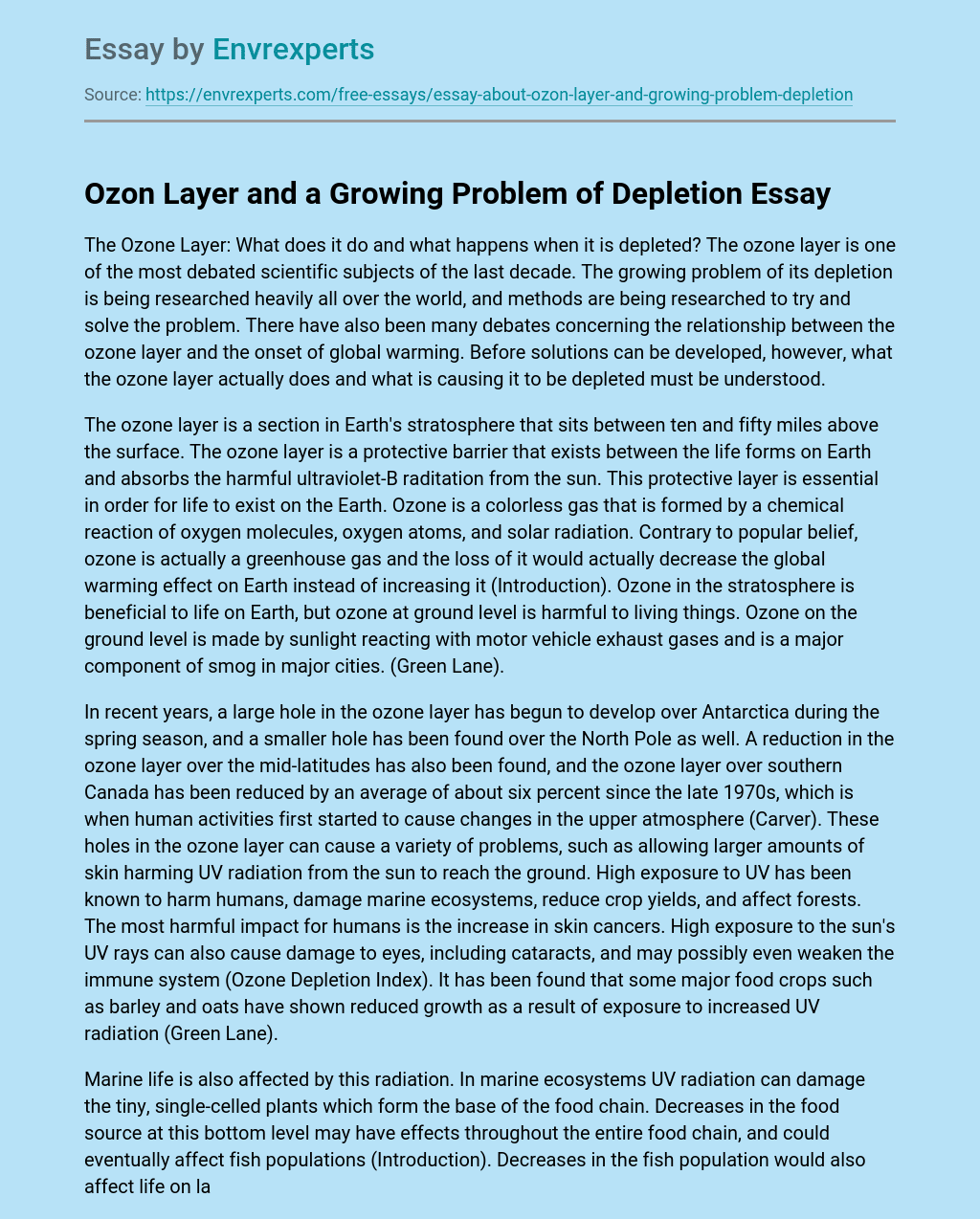