Ozone Depletion And its Consequences

Life on Earth is protected from harmful radiations by ozone layer. However, this shield is being damaged day by day due to harmful human activities. This paper will emphasize on how destruction of the ozone has and can further result in dire consequences to life on Earth unless steps are taken to reduce and eradicate this situation.

Recent measurements show that the amount of ozone in the stratosphere has decreased by about two percent since 1967. What is called the ozone hole over Antarctica actually is an area where concentrations are significantly lower than in the rest of the stratosphere.

Don’t waste time
Get a verified writer to help you with Ozone Depletion And its Consequences
Hire writer
$35.80 for a 2-page paper

It is estimated that up to eight percent of the protective ozone layer over the United States, Canada, and Europe has disappeared. Researchers report that the seasonal hole over Antarctica and some populated regions of the Southern Hemisphere thins the ozone layer by as much as 60 or 70 percent (Close & Playford, 1997).

Kerr (1990) states that new satellite data show that the ozone shield over the United States is eroding as fast as had been assumed.

Indeed the ozone is disappearing so quickly that it now looks as if the current plans to reduce the losses may be too little, too late (par.1).

In 1974, Molina and Rowland suggested that ozone would be destroyed by the catalysis of chlorine atoms, and the main anthropogenic source if chlorine atoms could be chlorofluoromethanes (Urbach, 1988).  The culprit destroying the stratospheric ozone are chemicals known as chlorofluorocarbons (CFCs) and halons produced and released into atmosphere by human activity.

They are very stable, and remain unchanged in the air for as long as a century. Other threats to ozone come from chemicals found in certain degreasers, adhesives, dyes, pesticides, and fungicides (Close & Playford, 1997).

There was another detection of apparent ozone destruction, this one by a group headed by Edward Browell s detected two patches of air that had up to 17% less ozone than the surrounding air. The nitrous oxide data again seemed to require chemical destruction of ozone. In addition, the altitude range of the patches, 17 to 23 km, coincided with that of the polar stratospheric clouds. In the Antarctic ozone hole, these icy clouds catalyze the production of ozone-destroying chlorine. The coincidence of ozone loss and clouds in the Arctic implies the same may be happening there (Kerr, 1990).

Despite this evidence, there are still doubters, but the link between CFCs and ozone loss was buttressed by calculation by three different groups of the amount of ozone that should have disappeared, given the chemical state of the atmosphere at its start (Kerr (1990).

There is evidence now that ozone-destroying forms of chlorine also form over the Arctic during the winter. The significance of this first chemical clue, the presence of chlorine dioxide, was hotly debated when it was first found over the Antarctic, especially by the meteorologists preferring purely winddriven mechanisms for creating the hole (Kerr, 1988).

Just how chlorine dioxide participates in ozone destruction has been a matter of some debate. It is a by-product of a recycling of chlorine and bromide that destroys ozone. It may be a participant in another ozone-destroying catalytic cycle in which two-chlorine monoxide molecules combine to form a dimer (Kerr 1988). Hoffman, Oltmans, Harris, Solomon, Deshler and Johnson (1992) gave evidence on possible causes of new zone depletion stating the 50% decline in stratospheric ozone levels over Antarctica in the spring of 1991 may have been brought on by the release of aerosol particles from the volcanic eruption of Mount Hudson in Aug 1991 (par.5). Researches also attributed the depletion of tropospheric ozone in the Arctic Region to sea salt. It is hypothesized that the depletion is caused by the gasification of sodium bromide and their release into the atmosphere (Vandendorpe, 1998).

Ozone Depletion And its Consequences. (2021, Oct 31). Retrieved from http://envrexperts.com/free-essays/essay-about-ozone-depletion-and-its-consequences 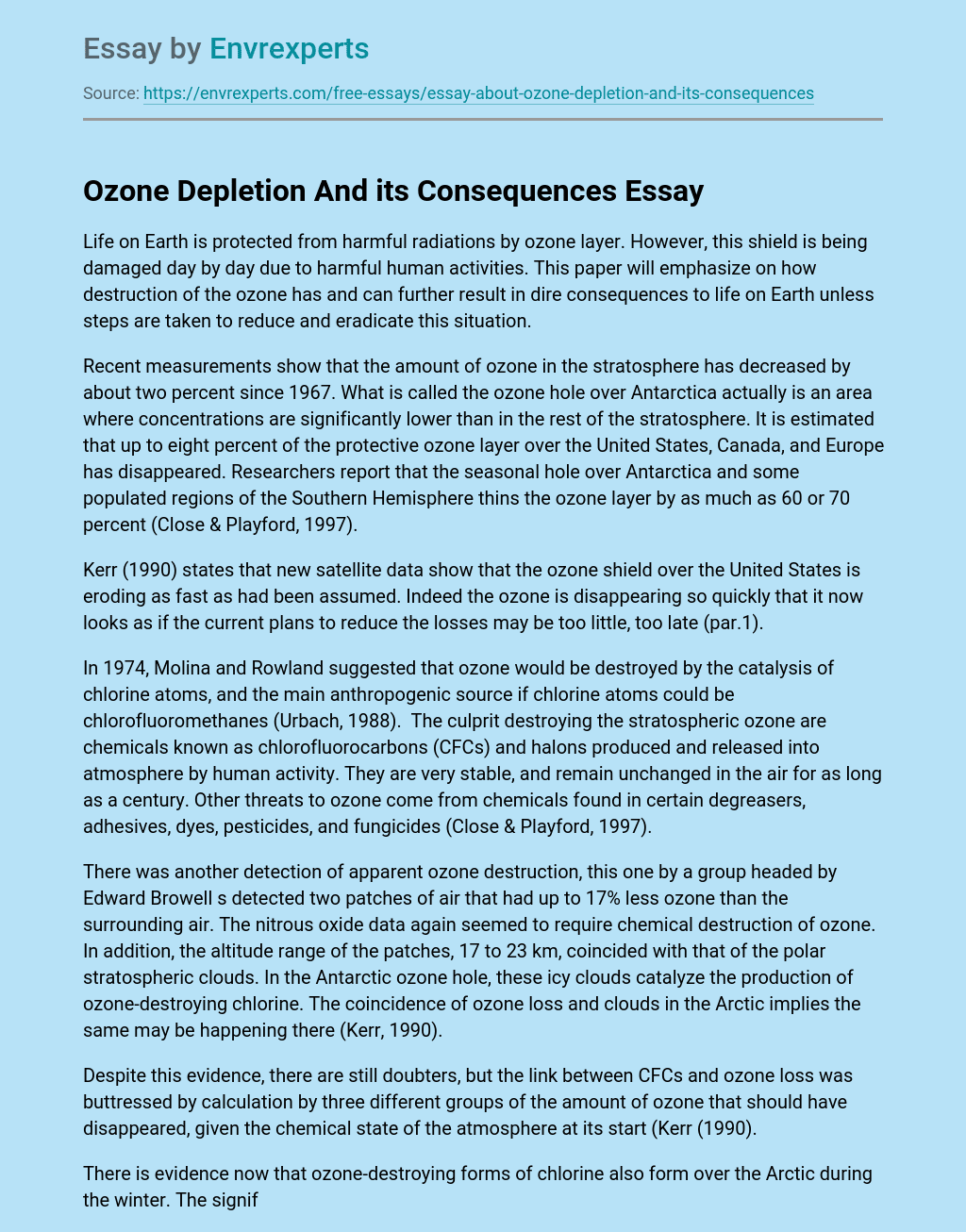