Pandemics are the worst thing that can happen to a region or country. The term pandemic refers to a disease that is prevalent throughout an entire country. The earliest pandemic dates all the way back to 430 B.C.: Athens. For this instance, I’ll be focusing on pandemics that started in certain Latin America countries. The countries I will focus on is Brazil, Peru, Venezuela, and Nicaragua. Each of these countries went through different pandemics but a lot of people were infected.

Don’t waste time
Get a verified writer to help you with Pandemics and Water Quality
Hire writer
$35.80 for a 2-page paper

Brazil is largest country in South America with about 165 million inhabitants exposed to the Dengue outbreak. Reports of the Dengue disease started in the 19th century and it was given the name polka because it gives victims twitch like symptoms from the myalgia and arthralgia in their system. The outbreaks occurred in Rio De Janeiro, north-eastern, and southern regions of Brazil. Over the past years Brazil has had many cases of Dengue in the country. The origins of the Brazilian dengue viruses were determined in the phylogenetic studies based on the E gene or the E/NS1 junction nucleotide sequence.

The DEN-1 strains isolated were shown to belong to the same genotype II. The DEN-2 isolates from different Brazilian regions showed to belong to genotype III. DEN-III also has genotype III. This means that all these viruses were probably introduced in Brazil from the Caribbean, Central America or northern South America where they caused previous outbreaks. The dengue epidemics in Brazil caused by DEN-1, 2, and 3, led to the occurrence of DHF/DSS.

The continuous circulation of the three dengue types is becoming an epidemic disease that is posing a serious public health threat. This is bad for Brazil because they face a severe hospital management crisis and the system can't support a sudden demand for the care of thousands of DHF/DSS cases requiring hospitalization. n 1995, dengue and DHF activity in the region was higher than in any year except 1981. In November, countries in the Americas had reported more than 200,000 dengue cases and 6,000 DHF cases, and approximately 90 deaths. Brazil had the largest amount of cases reported. The invasion of the dengue virus type 3, increased the threat of large epidemics and consequent risk for DHF (4).

Peru is the country home to 31.99 million people today. In March 1992 the country had more than 400,000 cases of cholera. The disease caused 3100 deaths when in broke out in late January. It’s spread from one location to another by people and can be propagated by contaminated water. Peru is known for its inexpensive travel and its citizens use the national transport system extensively. This helped with the spread of cholera into all parts of the country. Cholera only occurs where the environmental health conditions and hygienic practices are deficient. This occurred in Latin America where majority of cases where in economically disadvantaged area with no basic infrastructure of public services. Various studies in Peru have demonstrated poor water quality in many of the areas affected with cholera. Between 1984 and 1985, 100 water supply systems were examined and most water produced was contaminated. The Pan Health American Health Organization purchased many gas chlorinators and hypo chlorinators for installation in Peru’s water system. This helped permit the spread and introduction of cholera.

Venezuelan equine encephalitis (VEE) was first recognized in Venezuela in 1938. Venezuelan equine encephalitis virus is a -virus that was originally isolated from the brains of dead horses. In 1943, the first sightings of VEE in humans was reported from laboratories where equine isolates were being made. In 1952, the first human case of VEE was reported in Colombia, the first reported infection in the United States was recorded in 1968. It is an acute viral disease characterized by fever, chills, headache, nausea, vomiting, lumbosacral pain, and myalgia, which may progress to encephalitis. There hasn’t been a vaccine or treatment present to cure the virus. VEE is categorized as a RNA virus, so antivirals that have been successful against DNA viruses don’t work.

Nicaragua, country of Central America. It is the largest of the Central American republics. Being the second poorest country Nicaragua is an agricultural country specializing in coffee, sugar, bananas, and beef. Their money maker is cotton being one the countries most exported good.

Leptospirosis is an endemic zoonosis in Nicaragua, as seen by the statistics of the disease in the country. In 1995 there were 2,252 cases with clinical features of pulmonary hemorrhagic fever without jaundice that caused 48 deaths. With the support of the Centers for Disease Control and Prevention (CDC), the Leptospira strain causing the outbreak was isolated and a new serovar was found Australis Nicaragua. The bacterial disease, which can cause meningitis, liver damage and renal failure, is a relatively rare infection in humans but is common in tropical animals. It is transmitted by water, soil or food contaminated by urine from infected animals. Flooding from months of rains contributed to this outbreak.

Leptospirosis is treated with antibiotics like penicillin. These antibiotics should be given to the patient in the early ages of the disease. More powerful antibiotics need to be used with patients with more severe symptoms. There wasn’t a lot of information given about how this disease affected Nicaragua. Infectious diseases are a real and serious problem in Latin America and the Caribbean. To battle the risk of these infections, PAHO, with the investment of different organizations in the world, has arranged a plan to improve observation for rising sickness and upgrade nations' capacity to react successfully by reinforcing lab limit, preparing, and look into and by actualizing anticipation and control techniques. Ministers from nations all through the world talked about and supported the arrangement at a gathering of PAHO's Directing Council in September 1995. Successful execution of the plan will require cooperation by public health authorities and effort from organizations and specialists all through the area. 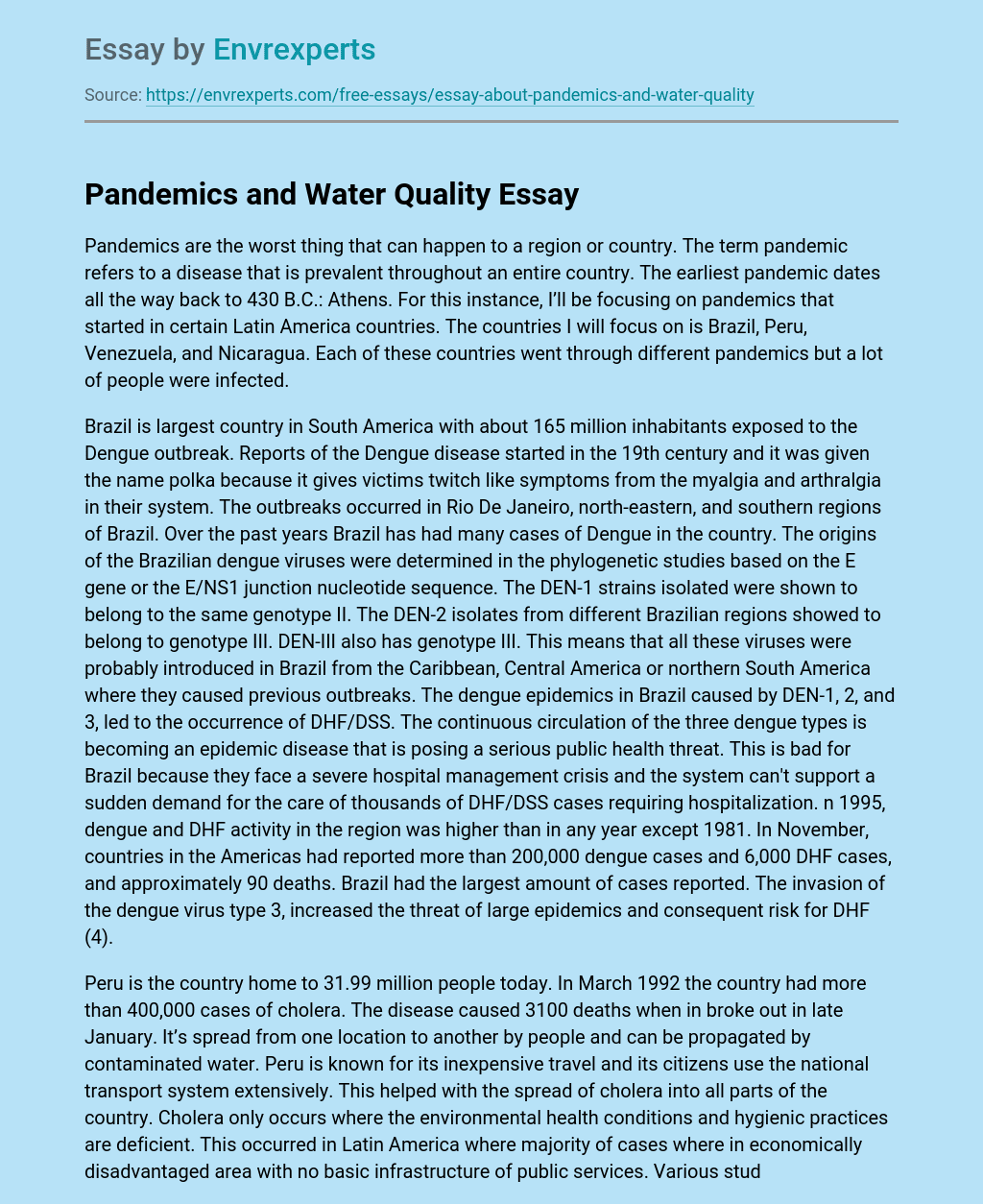