Panel's Warning on Climate Risk: Worst Is Yet to Come

Climate continues to change and affect the planet, while the world remains largely unresponsive. The latest and the upcoming reports by the Intergovernmental Panel on Climate Change, a United Nations group, both attempt to make world leaders aware of the issue and move them to action. This is exactly what Justin Gillis describe in his article, "Panel's Warning on Climate Risk: Worst Is Yet to Come.”

The report is projecting how global warming will impact the planet and humanity in the next decades.

Don’t waste time
Get a verified writer to help you with Panel’s Warning on Climate Risk: Worst Is Yet to Come
Hire writer
$35.80 for a 2-page paper

The effect is going to be profound unless the word responds. So far, it has been observed that the effects of climate change are only getting worse: ice caps are melting, natural disasters are intensifying, some species are becoming extinct, and rising oceans are threatening coastal communities. The report also predicts mass migrations, new poverty traps, and hot spots of hunger. Indirectly, climate change can also lead to violent conflict over land and resources. The problems are clearly that of now, not of a distant future.

One of the risks that the article highlights in particular is concerned with the global food supply. According to Rajendra K. Pachauri, chairman of the intergovernmental panel, everyone will be affected, especially the poor nations. Climate change has already disrupted supply and demand of these countries and is now offsetting decades of fight against world hunger. The report estimates that these poor countries need as much as $100 billion a year to try to combat the effects of climate change, but are presently receiving a few billion dollars a year at best.

According to Michel Jarraud, secretary general of WMO, there is enough data and research to make informed decisions and act. President Obama is trying impose significant new limits on the country's greenhouse emissions. In New York, the Public Service Commission ordered Edison to invest roughly $1 billion to prevent future damage from flooding and other weather disasters. In the past few years the world has seen a shift in thinking; since the last report in 2007, governments and world leaders have been planning and implementing solutions to adapt to climate change. Unfortunately, the whole world must take action to solve the problem. It seems Gillis' article is great at connecting the Panel's report to the current issues of climate change risk. It is comprehensive enough for the casual reader to get a sense of the current state of matters, yet it also finds room to delve into specific issues. The conclusions Gillis draws, as does the report, is that there is a shift in thinking about climate change, but a few isolated changes are not driving at the problem as a whole. Climate change is a planetary issue, and thus needs to be reacted to by the planet. Although a clear solution, it is not so practical. Perhaps isolated actions to change are what is needed, perhaps a chain reaction of good deeds is the way to move forward to eventually mobilize the planet.

Still however, in my opinion, the most important issues raised in the article is that of the disparity between rich and poor countries. While rich countries are mostly responsible for the greenhouse gas emissions, the poor countries are the ones to mostly feel the negative outcomes. While rich countries can afford to deal with the impact of climate change, poor countries cannot and are over-dependent on the rich countries for aid. The problem is that, although the rich nations are helping, their aid is not sufficient. We can argue that the wealthy part of the world owes it to the poor part of the world to help it in a complete way, at least for all the centuries of slavery, colonialism and imperialism. Yet, it seems the leaders of the rich and powerful nations still, as of today, only want what is in their best interest, not the planet's.

From what the article suggests, I can be a part of the solution by helping to spread the word via social network sites or events in my local community. I think this is still perhaps the number one goal; to make people aware. Additionally, I can be part of the effort by reusing and recycling or riding my bicycle to school and work every day. Lastly, and most importantly, I can support organizations such as the U.N., which is already taking big steps toward adaptability. The U.N. is making significant changes in eight key areas, including agriculture, forestry, cities, transportation, industry, energy, finance and resilience to combat the effects of climate change.

Panel's Warning on Climate Risk: Worst Is Yet to Come. (2021, Oct 31). Retrieved from http://envrexperts.com/free-essays/essay-about-panels-warning-climate-risk-worst-yet-come 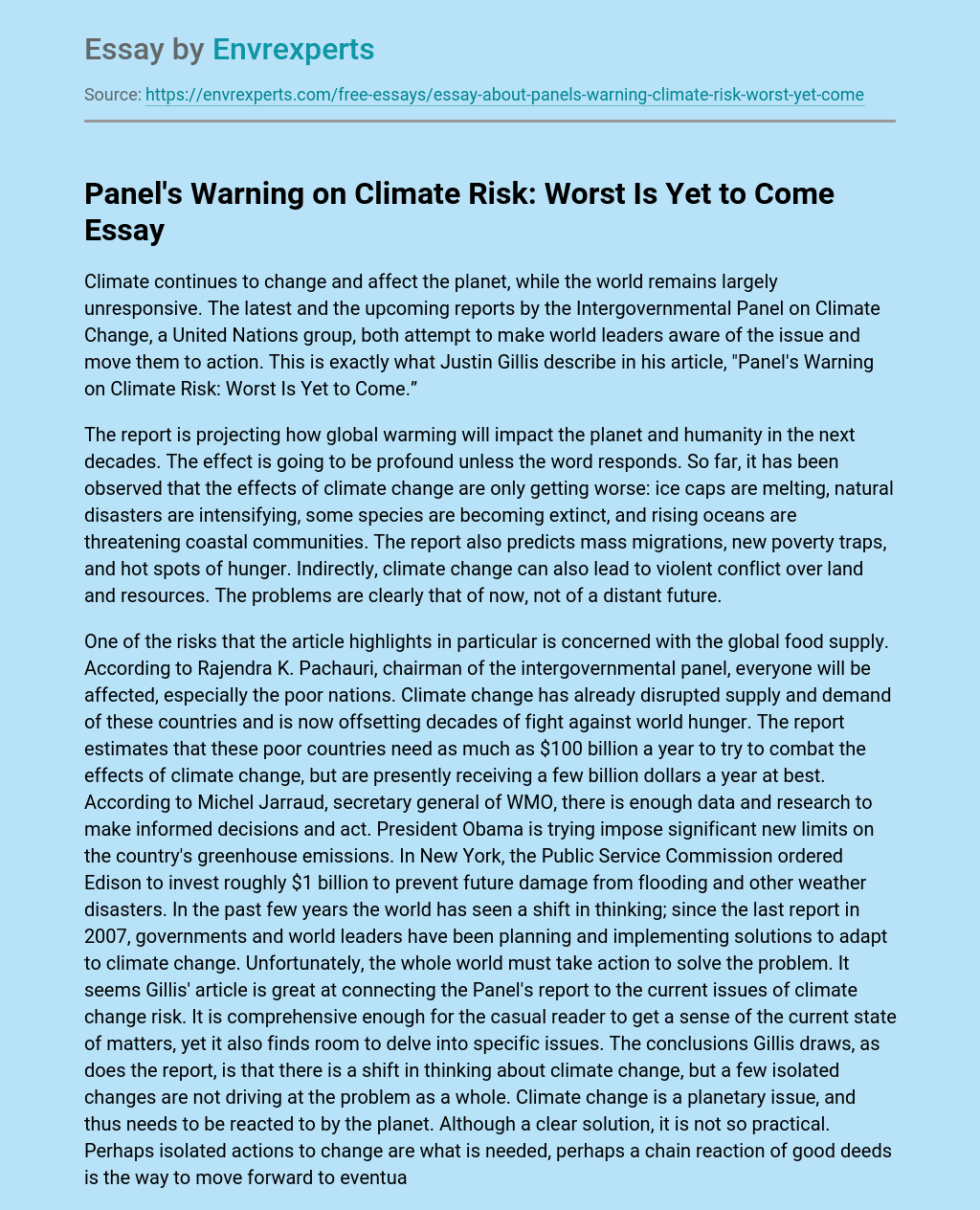