The Paris Climate Agreement would suck money out of the United States without many positive impacts in return. The goal in the Paris Agreement is to keep global warming below 2 degrees Celsius. This is ambitious and progressive, but the problem is that each countries contributions are still not enough to delay the rising temperatures.

According to the World Economic Formon, scientists predict that, even if the countries in the Paris Agreement commit their carbon reduction goals, the Earth’s temperature will still increase by 3 degrees Celsius.

Don’t waste time
Get a verified writer to help you with The Paris Climate Agreement
Hire writer
$35.80 for a 2-page paper

This number is still catastrophic, climatologists have said that just a 2-degree increase will cause a disaster. The deal also doesn\'t contain a global tax on carbon. Without a carbon tax, there is no financial reason for countries to stop using inexpensive fossil fuels and move to more sustainable sources.

A carbon tax could also be to pay for the billions of dollars that the United States and other powerful countries have to pay to help undeveloped counties transition to sustainable resources.

This would remove some of the financial stress placed on the United States in the Paris agreement and maybe to give them a reason to rejoin the deal. The biggest error that was made when drafting the Paris climate agreement, is the lack of punishment when leaving or not respecting the agreement.

The Paris Agreement doesn’t include any punishments for countries that don’t honor their commitments. Countries involved in the agreement can continue polluting and burning fossil fuels and emitting CO2 at alarming rates without having to suffer any negative consequences.

The Paris AGreement lacks many qualities that would make it stable and effective, it was wise for America to leave this deal and avoid wasting their money.

The Paris Agreement hurts the American people and economy, while also having little benefit and many flaws, the United States government was wise to leave and can only hope other countries will follow their lead. The deal would lower the national GDP and would stunt economic growth. The Paris Agreement also has many flaws and would be a unwise use of American dollars and would lead to America wasting billions.

The Paris agreement requires each country to stick to their carbon emission goals and keep lowering them, but there is no way to regulate each country\'s emissions or any way to punish a country if they do not keep to their promised goals. The Paris agreement would have set America down a long path of spending without gaining and it was a good decision for the government to leave as early as they did.

The Paris Agreement gave leaders and citizens around the world a false hope of positive change, but the United States saw this early on and was wise to leave this program. 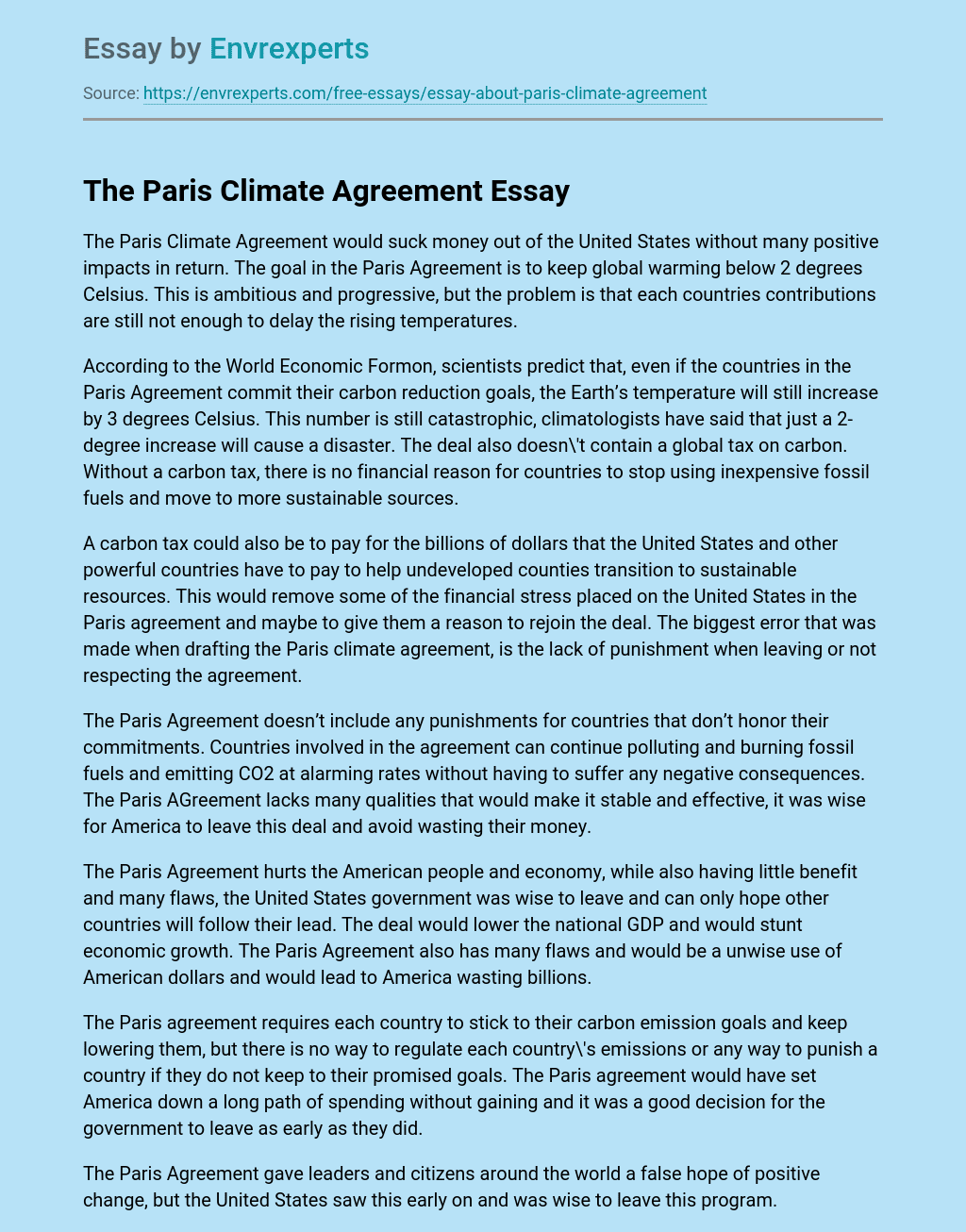