In 2010, I came to Australia as a prospective marriage visa (subclass 300) holder. This visa is granted to those who are in a serious relationship, engaged and met all the criteria set by the Australian government. It is a provisional visa which allows individual to enter Australia to marry their partner and apply for Australia permanent resident visa onshore. As a provisional (subclass 300) visa holder, it allows me to work with no restrictions attached. However, getting a job in Australia as a new arrival with no Australia working experience was difficult.

Don’t waste time
Get a verified writer to help you with Personal Experience Accessing Services Influence by Social Policy
Hire writer
$35.80 for a 2-page paper

Since I was not able to find a job due to the lack of Australia working experience, I was advised to contact job services providers and that they would be able to assist me in finding a job. Meanwhile, at this stage, I have no income and no money left, I was relying on my partner for everything. When I contacted Centrelink about what kind of support I can receive as a new migrant and concerning the challenges I was experiencing, I was shocked to learn that I was not eligible for Medicare, and also I could not access technical and further education (TAFE) and Higher Education Contribution Scheme also known as HECS, which would have enable me to further my education and obtain Australia qualifications and improve my chances of securing a job.

The Australian government policy of not allowing provisional visa (subclass 300) holder to access social welfare system is detrimental to the country in my view because the policy was disadvantageous to me.

As a new migrant with no working experience in Australia, it was difficult finding a job, and the option available to me in securing a job was to further my education at the university, but the policy did not allow me to access TAFE and HECS.
During this period, my partner and I were struggling to get by, her income was not enough for both of us to live comfortably, we were struggling financially, and it was beginning to impact other aspects of our lives, including our physical and mental wellbeing. It became very obvious after few weeks of my arrival in Australia, that the policy of not allowing provisional visa (subclass 300) holder in Australia to access Medicare and other social security benefits was having profound negative impacts on me and my partner, who is an Australian citizen. These experiences I had interacting with social service providers, including Centrelink and immigration, was very disappointing because I was not eligible to access the social services benefits that were very important for my settlement in Australia. The Australia immigration policy relating to the provisional (subclass 300) visa holder, in my opinion, are harsh and ineffective and not in the best interest of the country or the Australian citizens who sponsor their partners to Australia on this visa to get married and start a family together. The assistance I was seeking to acquire the training I needed to secure a job, for example, the Australia work experience, knowledge and the access to Australia healthcare system were the most relevant and important assistances I needed to have a smooth transition into the Australia community and workforce. If given these assistances as needed, it would be beneficial to the government and the country, but I was ineligible for the assistance and benefits due to the provisional visa policy I was holding. This policy made my transition into the Australia workforce very difficult. Also, at this stage, I could not afford to purchase my medications because I was still looking for a job and I had no income.

There are numerous ideologies and policy drivers behind this Australian government social welfare and immigration policy that makes it difficult for some new migrants arriving in Australia with a provisional visa to access the welfare services. Which include; political party in power wanting to look tough on immigrants trying to take advantage of the Australian social welfare system, and the campaigns by the right-wing media, that new immigrants coming to Australia are only interested in coming to Australia because of the generous welfare system. I think the rationale for making some visa holders ineligible to access the Australia social welfare system is to deter individuals who come to Australia with dishonest intention from taking advantage of the welfare system. However, individual who have a provisional visa in Australia should be eligible and have access to the same rights and social benefits as those who hold a permanent resident visa, because the welfare of the potential provisional visa holders and the potential Australian citizens, who might sponsor their partners to Australia, should be considered when making this policy decisions.
Social policies are created on presumptions about what might work (Althaus, Bridgman & Davis, 2007). These differences in assumptions and values can influence the design of social policy, and because of these differences, the social policy can have a dark side and is not necessarily about the improvement of personal welfare for many (Hill 2003).
The Australian government provisional (subclass 300) visa policy (Australian Government, 2020) has not been altered since I obtained this visa in 2010. The government policy behind the provisional visa is an attempt to present it as distinct, and which would not lead to permanent residency in Australia. This sentiment is evident in the challenges I encountered in my interactions with the welfare system and the difficulties I faced entering the workforce. It demonstrates that the policy has ignored the importance of ensuring that individual like myself, who are new migrant in Australia, receive the appropriate and necessary assistance needed during this uncertain period. The Australian Government social policy towards the provisional (subclass 300) visa holder should aspire to be fair, humane and equitable. The policy that applies to permanent resident holders should equally applies to provisional visa holders because most of the people with the provisional visa end up applying for permanent residency. One would assume that such policy should seek to assist them in their settlement in Australia and not become constraints to them.

It is well known that Sweden has one of the most effective assimilation and social welfare system in the world. The Swedish social welfare system is a model Australia should emulate. It offers equality to everyone in Sweden irrespective of their nationalities. Whether temporary or permanent visa holder, who has a working right, have equal right under the law and are treated equally just like citizen. That is the law in Sweden, and it has proven to help migrants to resettle and improve the lives of every workers in Sweden.

The National Board of Immigration was created in 1969 by the Swedish government to resolve the issues raised concerning the citizenship, immigration control, and the immigrant’s adjustment to the Swedish society. The recommendations presented by the Board were a fundamental break from the unreflected traditional assimilation policy. The new policy contents were condensed into three slogans; equality, freedom of choice and partnership. Some of the concerns raised in the uprisings by students and young intellectuals were questions of racism, discrimination and minority rights. The new immigrant and minority policy were an acceptance and reaction to the fact that Sweden was becoming a multicultural society. It was argued that cultural pluralism is what the future has in store.
The possibilities of Sweden to integrate its immigrants within the framework of a pluralistic society was given a rather optimistic and favourable view and the portray of confidence in the new immigrant policies were inspiring (Wiesbrock, 2011; Hammar, 1985). The most important ideology and the guiding principles of the Swedish model and welfare state were reflected in the slogan equality. In the immigration context, the application of equality was a rejection of the guest worker system. The economic and social rights that were enjoyed by swedes should also be enjoyed by immigrant workers, and they were given the right to also bring their families to Sweden. This right has never been questioned.
The liberal tradition of ideas, echoes by the freedom of choice slogan, like equality, begins in the French Revolution. The main idea is the determination of individual cultural affiliation and identity and not collectives, ethnic groups or organisations. The goal was, as it were, the rejection of uncompromising and forced assimilation of individuals (Hammar, 1985). As claimed by Hammar (1985), the partnership slogan may be the most difficult to understand because it is seen as an application of the other two slogans to political life. In the development of society, minority groups and immigrants are viewed as partners. They are given the freedom of association right, and also, public support in maintaining their associations. However, Wiesbrock (2011) states that the partnership was indeed to express the need for solidarity and mutual tolerance among native Swedes and immigrants. The aim was understood to be a rejection of social exclusion, racism and discrimination on ethnic and racial grounds

The general welfare policy was, and still is, the most important tool to ensure equality, which include social benefits, health care, access to training and further education and HECS, a sensible just pension system, housing and labour market policies. When it comes to integration, the labour market is an important sector. It is an intersection where the citizens of the host country and migrants meet, interact and develop mutual interdependence. The fundamental principle is that values like dignity, solidarity and independence are inspired by work. Therefore, work has always been used as the core tool to achieve social integration in Sweden. Immigrant with permanent resident visas are known to be enjoying equal rights and responsibilities as Sweden citizens when it comes to their involvement in the labour market, and they also have equal access to courses at universities and vocational trainings, and on the same conditions as Swedes. According to Koeppel (2019), even the conservatives support the Swedish welfare policy. Sweden top economic priority and national philosophy is to have full employment, and the job is seen as the economic foundation of the welfare state and key to a normal life.
Adaptation of Swedish policy of equal rights for both citizens and migrants with working right in the labour market would be enormously beneficial to Australia as a country and its citizens. This kind of policy would facilitate and assist in the gaining of employment for new migrants and would lead to increase in tax revenue for the country, and more revenue would lead to the sustainability and continuation of the provisions of the social services and benefits for its citizens. The Swedish social welfare and immigration policy would have allowed me, if adapted in Australia, to gain access to all the relevant supports I required to secure a job within the shortest period after my arrival in Australia, and as a result, avoid all the hardship and difficulties I experienced. 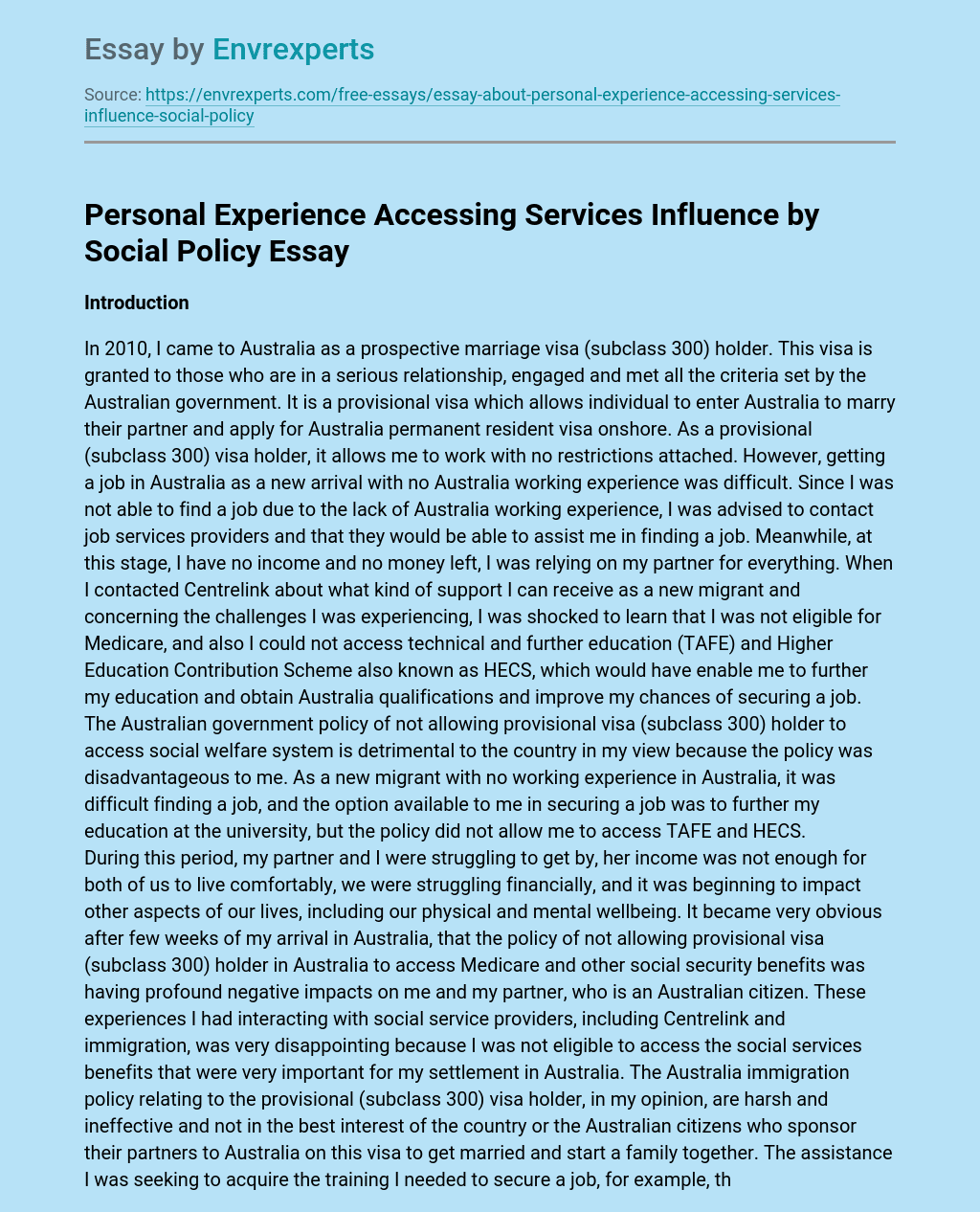