A Personal Recount of a Forest Fire

Late one Wednesday night in May, my girlfriend and I spotted some smoke and could see lava-like fire coming from the Jemez Mountains. We knew right away that it was a forest fire, but did not know how serious it was. We drove to my house to ask my dad what was happening in and around the Atomic City. He didn't know the details of the fire, so we turned on the TV to get some information about it. Every channel was talking about the Cerro Grande fire that had started from a prescribed burn.

Don’t waste time
Get a verified writer to help you with A Personal Recount of a Forest Fire
Hire writer
$35.80 for a 2-page paper

The rest of that night we never left the couch.

The television broadcasted that all Los Alamos residents should be prepared to evacuate the following day. The phone rang and it was my dad s boss from the laboratory; he called to say that work had been canceled for the rest of the week. Shortly after that phone call, the news anchor on the TV announced that there would no work for all Lab employees.

We figured that the fire must have been pretty serious.

My dad laid lifeless on the couch, showing no emotion. One hour passed, and still he hadn t moved. Not only was the fire consuming up the Jemez Mountains, it was also eating my Dad. He was really quiet and that is not his normal self. My Mom and I sat with him watching the continuous coverage of the fire on all the local channels. The news was keeping us well informed of all changes that were taking place on that hill north of Santa Fe.

The local stations helicopters showed us that this fire meant business. Flames shooting hundreds of feet high torched anything and everything in its way. Tornado like winds made it impossible for fire fighters and slurry bombers to try and stop the raging fire. From our house we could see a huge cloud of black smoke that covered a lot of the northern sky.

When my Mom and I got home from school that next day, my Dad said that the fire was creeping closer and closer to the town and all the residents had to evacuate. He was afraid that the fire would consume his friends homes as well as his job.

A few minutes later, it was confirmed that the fire had reached the outskirts of the town. On the TV shortly after, we watched those houses burn uncontrollably; it looked like a war zone. That night I went to bed pretty late, and I woke up the next morning thinking that it was all a dream.

Unfortunately the morning newspaper was there to remind me of the devastation that had happened the night before. The TV as well, showed pictures of a town and forest that looked like the Apocalypse had swept threw it. Burning embers danced across the black floor making it look as if the end was never going to come. Live reporters showed just how windy it was outside, with their hair standing straight up and their jackets flapping louder than they could talk. We could hear bombs in the background, thinking that the labs and all its nuclear secrets were up in flames. The reporters assured us that the labs were intact, but butane bottles that residents had left behind were exploding. They said repeatedly that the laboratory was safe and only the outskirts had been damaged.

At school, in all the class rooms, a TV was kept on to inform us of all the changing headlines. The moral of the student body was low, almost not existent. A lot of the students and teachers walked around like zombies, empty and zoned out. They were preoccupied thinking of the fire.

One week after this hellish fire had scorched the Jemez Mountains and passed right threw the outskirts of Los Alamos; the media was a reliable resource. They kept the nation and most importantly my family informed of the Cerro Grande Wildfire.

A Personal Recount of a Forest Fire. (2021, Oct 31). Retrieved from http://envrexperts.com/free-essays/essay-about-personal-recount-forest-fire 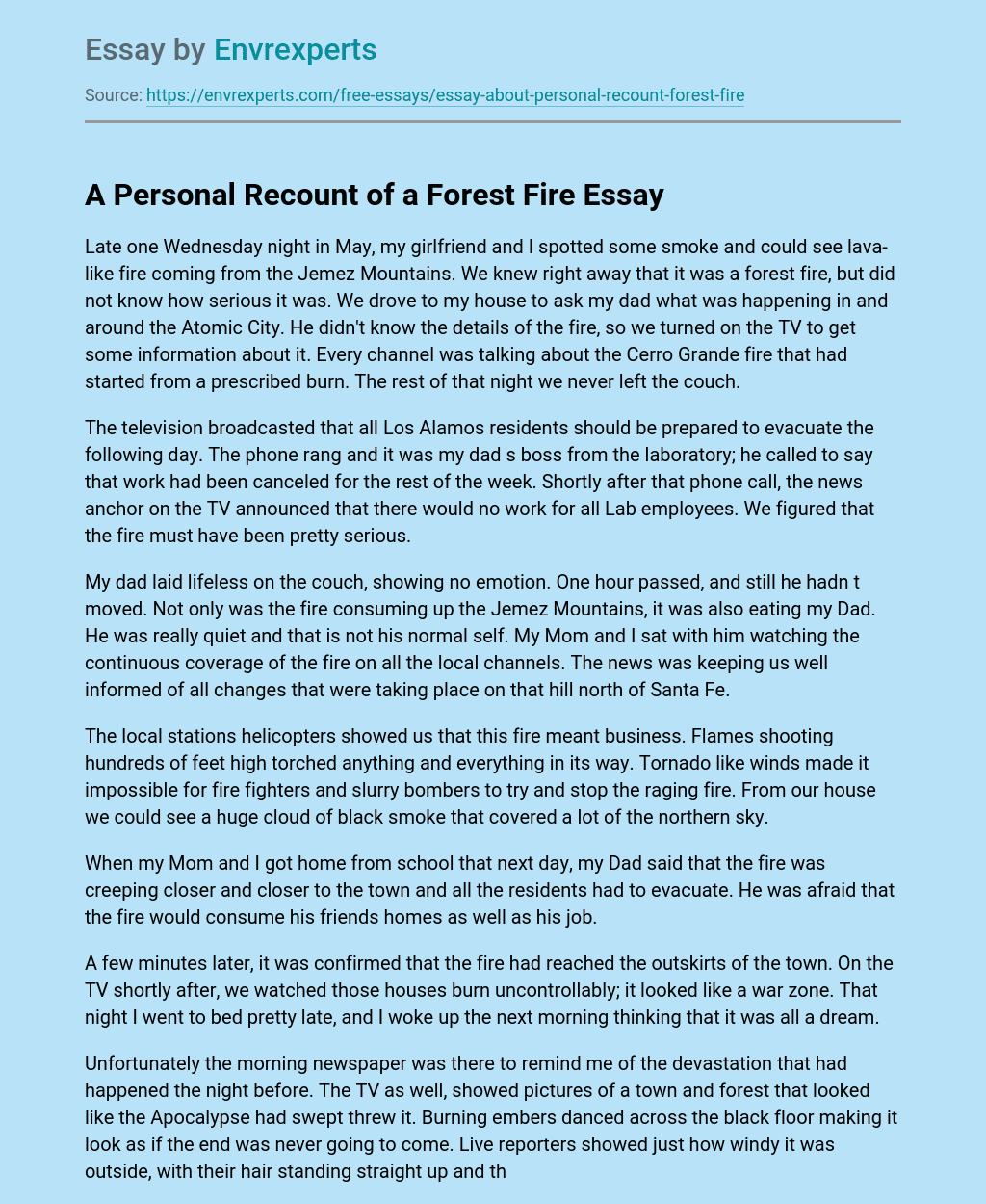