The question that is before us is rather complex: What is my lifes meaning as an ecological being on the Planet Earth? In this essay, I will attempt to explore three aspects of my life, as they pertain to the environment and the ecological footprint that I have left, and while leave in the future. This will be achieved through exploring three important aspects of my life, as they relate to the environment: Consumption, Career, and Speaking Up.

The first aspect I will explore of my life, as it relates to my ecological footprint, is consumption.

Don’t waste time
Get a verified writer to help you with A Personal View of Life’s Meaning as an Ecological Being on the Planet Earth
Hire writer
$35.80 for a 2-page paper

How much we consume, can determine a large portion of our environmental impact. As a consumer, I currently spend little time caring about the impact that my purchases and actions have the environment. Perhaps, one thing that I do is have my groceries put into plastic bags, instead of paper bags. This cuts down on the demand for trees to be cut down, for making paper bags.

If everyone used plastic bags, the demand for paper bags would go significantly down, in effect, the demand for trees being cut down could go slightly down. However, the creation of plastic for grocery bags also creates waste, which is harmful for the environment. Therefore, there is no easy answer to even the simplest of choices, as they relate to our environment. Whenever I purchase groceries, I usually dont take into account the materials my groceries are packaged in: tins, plastic, paper, cardboard, there is little difference in my mind.

Perhaps, a goal for myself should be to explore which of these options is least harmful for our environment, and strive to purchase my food products that are packaged accordingly. One thing that I do consider when I purchase paper for school and for my printer, is whether or not it is recycled. I always try to purchase items that are recycled. Sometimes, they may cost slightly more, but its worth it. Sometimes I think about this as a long-term investment for my childrens children, doing my part for the environment. My vision for the future of consumption would for companies and industries to compete for making products the most environmentally sound. For manufacturers to use recycled metal from automobiles, cans, etc.; for industries to create the least amount of waste and air pollution that is feasible and financially reasonable.

The second aspect of my life, which I would like to explore, as it relates to the environment, is a future and current career. No matter what career I choose, it will have some sort of environmental implications whether they deal explicitly with the environment or not. It is important for me to consider the impact that my chosen field may have in the future, as well as what impact it currently has. Currently, Im employed part-time as a photojournalist, weekend reporter for a local television station. Perhaps the most substantial impact this field has on the environment, is air pollution and electricity. Much of my job is on the road, driving to newsworthy events, car accidents, house fires, and car scenes. In fact, this past weekend, I drove for two-hours to film an overnight warehouse fire, which destroyed an international companys storage and operation facility in Pennsylvania. Driving and burning gasoline omits harmful fumes into the atmosphere, which are a leading cause of acid rain and smog. Although smog does not appear to be a problem in central Pennsylvania, once you travel southwest or southeast to Pittsburgh or Philadelphia, there is a plethora of smog. However, there is a large amount of acid rain in this region of the state. Some of this can be rightfully blamed on industries in the New York and Erie areas, where pollutants travel in the air to our region, via storm systems.

The damage from acid rain can be seen in our local community. For example, the Bellefonte Courthouse in Bellefonte, Pennsylvania has undergone restoration due to acid rain this past summer. There are also numerous buildings in the larger cities of Pennsylvania, where the marble statues have been run down due to this acidic pollutant. Worst of all, the vehicles we drive for work are always SUVs or larger. This is needed to store gear, but these types of vehicles guzzle a substantial amount of gasoline, compared to many other automobiles, such as cars and mid-size vehicles. These vehicles also create more pollution then other cars, due to the above fact and the fact that they are higher performance engines, which exert more energy to run the vehicle. There is not much I can do about this pollution, which is created, during my work. By no means can I atone for the pollution that I create, but I comfort myself, occasionally, by covering environmental stories which hopefully raise awareness in the community about pollution, as well as apply pressure to lawmakers about these types of issues.

For a future career, Im not sure exactly what I will do. If I continue down the field of journalism, my impact on the environment will probably only differ slightly, if any. If more environmentally efficient SUVs are invented, which is expected, perhaps I could influence the station | work at to set an example for the community by switching to these vehicles. Whether you a lumberjack cutting down trees, or a forest ranger driving a truck around enforcing environmental laws, you are creating pollution. The lumberjack, more directly, as he cuts down the worlds source of viable oxygen. The forest ranger, more indirectly, as his vehicle lets out emissions that can create acid rain or damage leaves in the forest, as these pollutants cling to the underside pores of vegetation.
The final section of this paper, which I would like to explore, is pollution created by air force and other military jets. Recently, the ranch that I have worked at for four of the past five summers is bombarded by low flying military aircraft, which use a region of the Sangre Cristo Mountains to train. Philmont Scout Ranch is a national camping area, owned and operated by the Boy Scouts of America. Philmont is large, comprising 137,493 acres or about 215 square miles of rugged mountain wilderness. Philmont has high mountains, which dominate rough terrain with an elevation ranging from 6,500 to 12,441 feet. In the course of a year, approximately 30,000 Scouts, Scout leaders, and their family members, from all over the United States and the world, participate in the various activities offered at the Ranch. About 25,000 of these Scouts are on the Ranch during the months of June to August. Most of these individuals participate in 12 day backpacking treks that include activities such as rock climbing, horseback riding, nature and environment study, burro packing and other wilderness and Western-themed activities. Others participate in classroom conferences and family programs at the Philmont Training Center, the National Volunteer Training Center of the Boy Scouts of America. The United States Air Force is currently considering including low-level bomber over flights of Philmont in one of three alternative routes for its Realistic Bomber Training Initiative (RBTI.) The RBTI is intended to train Air Force bomber crews on terrain following missions. Current routes are in Texas, Nevada, and Arkansas. The Air Force is looking for more economical routes near its bases in Texas. The other two routes
being considered are in West Texas.

According the Air Force's Draft Environmental Impact Study the route called Alternative D of the RBTI calls for 2,660 annual flights (about 10 per day) of B-1 and B-52 bombers over Philmont bombers at a base altitude of 400 feet. These flights would occur six days a week (Sunday excluded), 12 months a year. The Air Force estimates that 20% of the flights would occur between the hours of 10:00 PM and 2:00 AM. The proposed route covers 114,600 of Philmont's 137,000 acres, including the most commonly hiked trails, the Ranch Headquarters, and Training Center areas. According to the Air Force's calculations, each Philmont over-flight would average 3.3 minutes for B-52's and 2.1 minutes for B-1's. A Scout participating in a 12-day trek would be exposed to 4 to 6 hours of overflight. Every Philmont participant would directly experience over-flights.

I have a concern about the startle effect on horses during the daily trail rides and on Scouts hiking on narrow trails or climbing on rock walls, towers, or poles threatens the safety of these individuals. Hundreds, if not thousands, of Scouts are participating in these activities each day. I think there should also be concern about the short-term and long-term impact on historic wilderness cabins occupied by the summer staff and the two open gold mines that Scouts are able to tour. I personally, wouldnt want to be in a mine, when it starts to tremble because of an aircraft that is only a couple hundred feet overhead. Another concern of mine is the pollution created from these aircraft. Fuel, which is not burnt, is dropped during flight, because of the engine types of these planes. Imagine sitting at a campfire, then all of the sudden a jet flies over, as it dumps pounds of highly explosive jet fuel creating a explosion of fire as it lands on you and the campfire, perhaps killing or burning hundreds of scouts. The possibility does exist.

These are all crucial issues that have concerned me in relation to this problem. For the speaking up of this project, I plan on writing a letter to the Air force military base in Texas, which is proposing these different military aircraft routes. I also plan to submit my information to the CBS national news headquarters in New York City. Hopefully, they may consider this an interesting story, and apply national news coverage and pressure on the military to choice alternate routes.

In conclusion, writing this essay has allowed me realize that making a difference, as it pertains to the environment, is not actually an impossible goal. For my ecological identity project will consist of writing a formal letter to government officials, news organizations, and air force officials about the importance of not conducting low-level flight operations above the Philmont Scout Ranch.

This is a simple thing that I can do, which could possibly make a huge difference in land, air, and noise pollution over the Philmont Scout Ranch. But more importantly, this essay has allowed me to evaluate my own life, and how I have a negative impact on the environment. One lesson that I have learned is that every human being creates environmental pollution, by their very nature. The goal is to minimize the impact which is created on the environment. This can be accomplished by getting groceries in a plastic bag, by driving a fuel efficient vehicle, riding a bicycle for short trips in decent weather, walking to classes, using public transportation for trips to other cities, such as buses, etc. Minimizing pollution can also be the result of turning out the lights before you leave the room, taking short showers, turning off the water when you are brushing your teach, buying rechargeable batteries. Although all these things may seem insignificant in and of themselves, they all add up over the course of a lifetime. If we all do a little, we can do a lot. This age-old adage has some meaning now.

A Personal View of Life's Meaning as an Ecological Being on the Planet Earth. (2021, Oct 31). Retrieved from http://envrexperts.com/free-essays/essay-about-personal-view-lifes-meaning-ecological-being-planet-earth 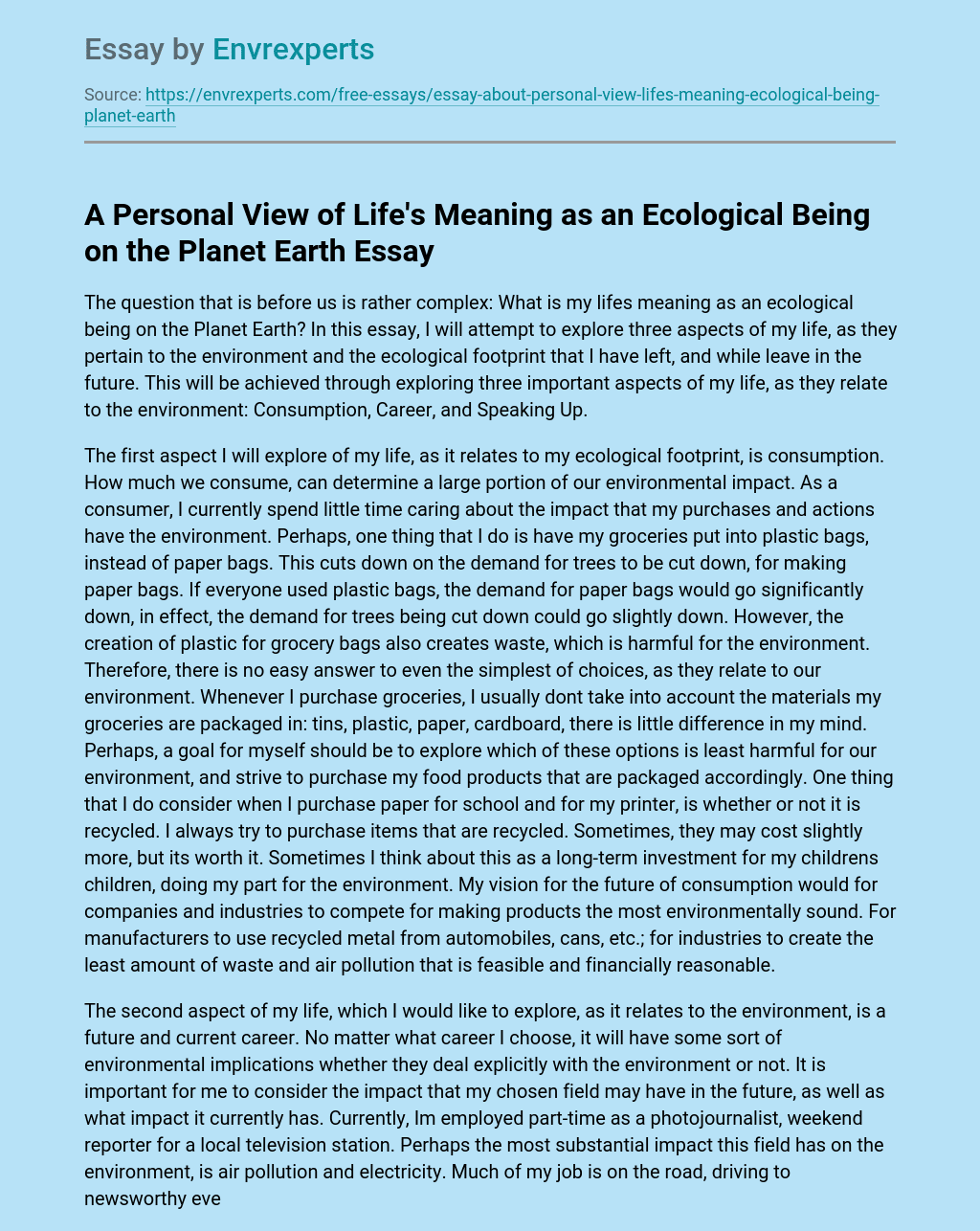