A Perspective on US-China Trade Relations and Regulation

Trade relations between the US and China has been in the forefront of political discourse for the majority of this century. International trade between the US and its trading partners is governed by regulations to establish tariffs on imported goods to regulate and balance imports and exports and protect consumers (Schaufeld, 2015). Given, the US’ increasing dependence on Chinese produced goods, the imbalance of trade has become a focal topic for the US government. Lax oversight of Chinese manufacturing and low cost labor has led to a flood of cheap, potentially unsafe products entering the US [and world] markets.

Don’t waste time
Get a verified writer to help you with A Perspective on US-China Trade Relations and Regulation
Hire writer
$35.80 for a 2-page paper

The growth of China’s economy has been unprecedented for the past several decades. With such growth comes the inevitable pain associated with unbridled expansion. While this has resulted in the influx to the US of low cost goods from China [and generally, been well received by price-conscious US consumers], much of their manufacturing has gone unchecked resulting in consumer and product safety issues that have escalated to the global public attention.

Three key issues arise from the US-China relation. The first is pushing for equilibrium of trade between the two countries while negotiating appropriate tariffs on these imports to balance them with domestic production. Second is the US [and other countries that import Chinese goods] asserting its domestic regulation and oversight on these goods around consumer and product safety. Third is the US’ expectation for the recognition of intellectual property, environmental concern and basic human rights for Chinese citizens.

These factors intertwine to create a complex narrative for negotiating the trade relationship between the US and China.

In the late 1970’s, China’s trade represented 6% of their Gross National Product (GNP). By the mid 1980’s, trade had risen to 20% of their GNP and by 2018, trade represented 38% of their GNP (World Bank, 2019). A milestone for China in 1986 when it joined GATT and formally entered into agreement on global trade practices. The General Agreement on Tariffs and Trade (GATT) was established in 1947 by the United Nations. GATT is a legal agreement between countries to reduce trade barriers, such as tariffs and quotas, between countries. In 2001, China joined the successor to GATT and later joined the WTO. As a successor to GATT, the UN established the World Trade Organization (WTO) in 1994 to govern global trade. International trade continues to be one of the most important aspects of a country’s economy. Trade between China and the US has grown from $33 billion in 1992 to over $772 billion in goods and services in 2017 (DoS, 2018). They are the US’ third largest trading partner behind Canada and Mexico, exporting billions of dollars in goods to US annually. The US-China trade relationship is responsible for more than 2.6M jobs in the US (Oxford, 2017). However, US News reported that between 2001 and 2018, the US has lost 3.7M jobs to China (Soergel, 2020). So, there exists a dichotomy of job creation and loss to further complicate trade relations.

With this rich trade history comes tensions between the countries that have prevailed over several hundred years. From 1985 through 2018, the US trade deficit with China had grown to $419B, reducing slightly in 2019 to $345B as a result of the Trump administration policies (Census, 2019). This trade gap has caused outcry from US manufacturers and producers around the trade inequities between the two countries. Agriculture has been particularly hard hit by the trade war and increased tariffs as China is the largest importer of US agricultural products, including soy beans and pork products (Oxford, 2017).
Since becoming a member of the WTO, China has lowered trade barriers by reducing import tariffs on average from 15.3% in 2001 to 9.8% in 2018 (HKTDC,2019). US imports from China has been fueled by US’ thirst for cheaper goods which creates a Chinese favored supply/demand cycle and resulted in a significant trade deficit between the two countries. China’s trade surplus and tariff policy towards US imports has been a key topic of the current US administration culminating with threats of the US increasing tariff on approximately $600B of select Chinese imports by 25%. Later, the US backed off that position reducing the increase to 10% on select goods. The US is penalizing Chinese imports in an effort to force the Chinese to negotiate trade agreements that are more balanced.

Consumer product safety is front and center in this relationship. Cheaper products and lax regulations lead to ongoing safety issues once these products enter the US. Consumer and product safety continue to be a focal point for Chinese imports. Consumer and product safety regulations are similar between the countries. In the US, the Consumer Product Safety Act (CPSA) is designed to evaluate and certify products as safe for consumers. However, China’s consumer protection laws have failed to keep up with fast growth. China has similar agencies to the US Underwriters Laboratories (UL) and Food and Drug Administration (FDA) but they have not been able to maintain pace with consumer products policing and protection. At issue, a number of these products have been publicized in US news outlets as cause for consumer accidents, injury and illness (Webley, 2007). Based on the volume of products entering the US, the ratio is small, but still a poignant indicator of “growth before governance and oversight.” While their consumer protection practices have improved over the past decade, significant improvement is needed in comparison to the US.
Another area of concern is theft [or infringement] of intellectual Property (IP) and copyrights and/or trademarks is an ongoing issue between US and Chinese companies. The US has long accused China of subsuming US IP and/or reverse engineering US products. One approach is by “forced technology transfer,” which is the method used by a domestic government to force foreign businesses to share their technology in order to gain access to that market. China utilizes this practice by forcing US technology companies to share technology trade secrets in order to gain access to the massive Chinese market. As evidence of this, in 2003, Cisco Systems sued Chinese technology company – Huawei, for infringement of IP claiming Huawei copied portions of its iOS source code which is the basis of the operating systems for Cisco’s routing and switching technology product lines among others. The suit was settled in 2004 with Huawei conceding and complying with the court’s ruling to make concessions to its products and halt use of the infringed code.
Another area is copyright and trademark infringement, Chinese manufacturers openly produce counterfeit, typically designer brands, and sell them on secondary markets or alternate back channels to global consumers. It is believed that US supply chains are littered with counterfeit parts from Chinese manufacturers (Navarro, 2016).
Beyond the scope of this discussion but impacting the trade relationship and ongoing negotiations include worker safety, environmental protection, cybercrime and basic human rights affecting this delicate balance.

It is clear that the US and China have a long, rich history of trade between the two countries. China is in the midst of its own industrial revolution where economic growth is emphasized over regulation. The Chinese government will have to step up its regarding regulation and focus on consumer protections and products produced. Additionally, they will need to continually police for cyber hacking, IP infringements and counterfeiting.
The US and its allies must continue to negotiate on several fronts and make strides to rebalance trade and reduce the deficit, press for environmental awareness and controls, emphasize product and workplace safety and finally continue to pressure China for basic human rights of its citizens. Until, some equitability is reached, the friction will continue. Success is based on detente as threats between countries will lead nowhere and never has proven successful throughout history. Open dialogue has shown to be the only long-term path to a mutual trade agreement of respect and dignity for each of the trading partners.

A Perspective on US-China Trade Relations and Regulation. (2021, Oct 31). Retrieved from http://envrexperts.com/free-essays/essay-about-perspective-us-china-trade-relations-and-regulation 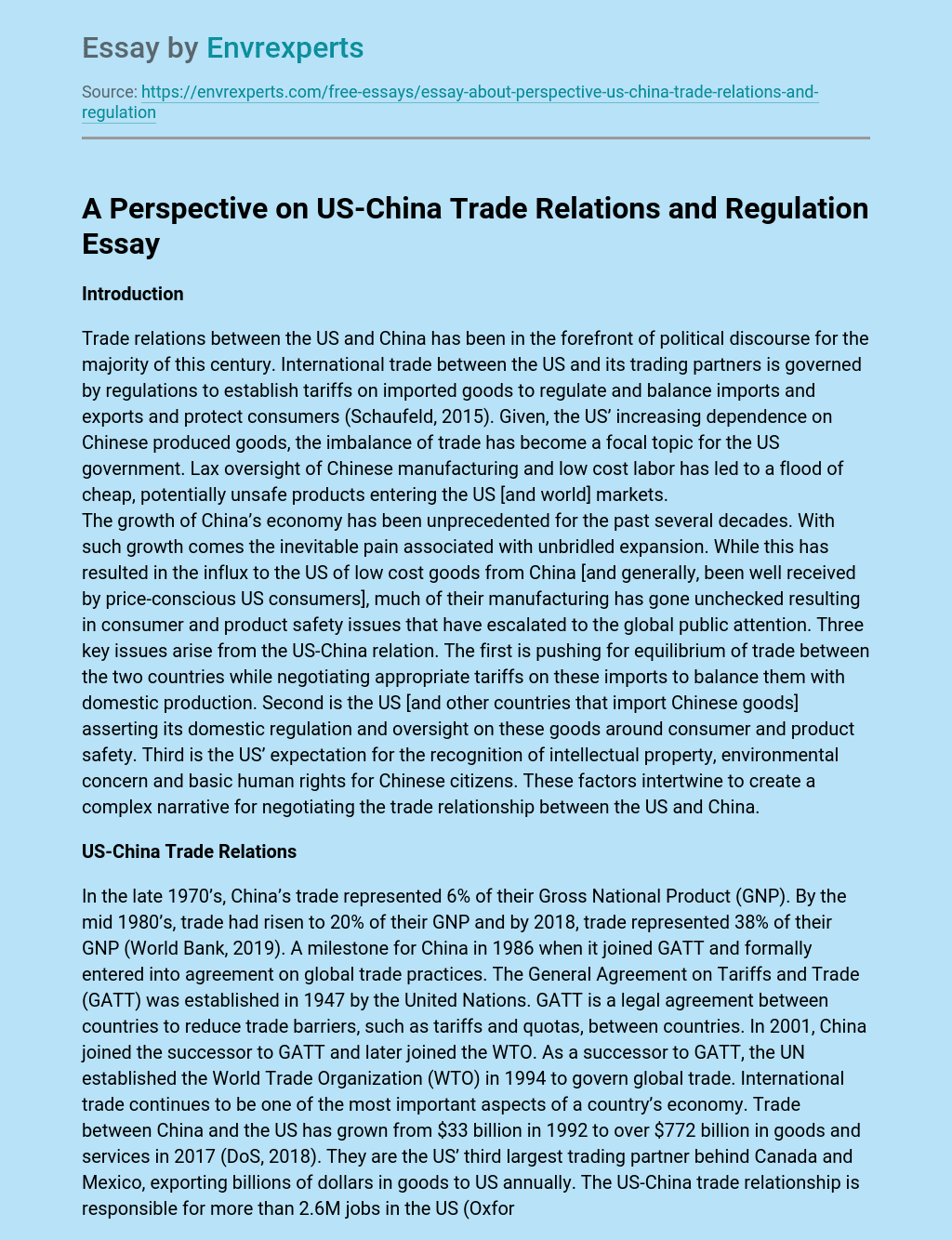