The People's Republic of China's (PRC) has a demand for oil because of its rapid population growth and production growth. The petroleum request has been a global issue that can significantly affect the international relations and the status quo. It is important to know the history and structure of the Chinese petroleum industry, China's consumption and production of petroleum, and China's role in the world oil industry.

China is the world's second largest producer of electricity, and its rapid demand growth is also the world's highest.

Don’t waste time
Get a verified writer to help you with Petroleum Industry in China and the Disadvantages and Advantages of State Owned Oil Companies
Hire writer
$35.80 for a 2-page paper

China also surpassed the United States and became a major importer of oil. With the rapid demand of petroleum, what were the government policies to respond? What are the roles of Nation Owned Companies and the Central government in the oil industry? What are the characteristics of Chinese State-owned Oil Companies? This paper will discusses the development of China's petroleum industry, and disadvantages and advantages of the state owned oil companies, the strategic petroleum price control by taxation, tariffs, price caps, and subsidies, and the environmental damage of CO2 emission.

The paper will be divided into six sectors. First, there is the background information for China's oil resources distribution and the oil pipeline network. Second, the disadvantage of China’s planned economy in 1949 to 1978 will be discussed. The third section will indicate the decentralization policy developed the petroleum industry. Section four will discuss the reconstruction of NOCs further increased the oil consumption and production.

Fifth, the government policy to control oil prices will be discussed. Finally, Chinese government has a plan to reduce CO2 emission.

China is not satisfied with its oil reserves because of its huge demand and rapid industrialization, and China invests in pipeline network to import more petroleum. This paper argued the disadvantage of central planning in self-reliance era is the lack of technology and appropriate policies. In order to increase oil production, government decentralized its power and co-governance with NOCs. After China connected with the international market, further reformations were implied to reconstruct NOCs. The advantage of the state-owned oil companies is that government has the authority to adjust oil price by taxation, tariffs, price caps, and subsidies. Yet, the oil subsidies encourage world's CO2 emission and harm the environment.

Petroleum Industry in China and the Disadvantages and Advantages of State Owned Oil Companies. (2021, Oct 31). Retrieved from http://envrexperts.com/free-essays/essay-about-petroleum-industry-china-and-disadvantages-and-advantages-state-owned-oil-companies 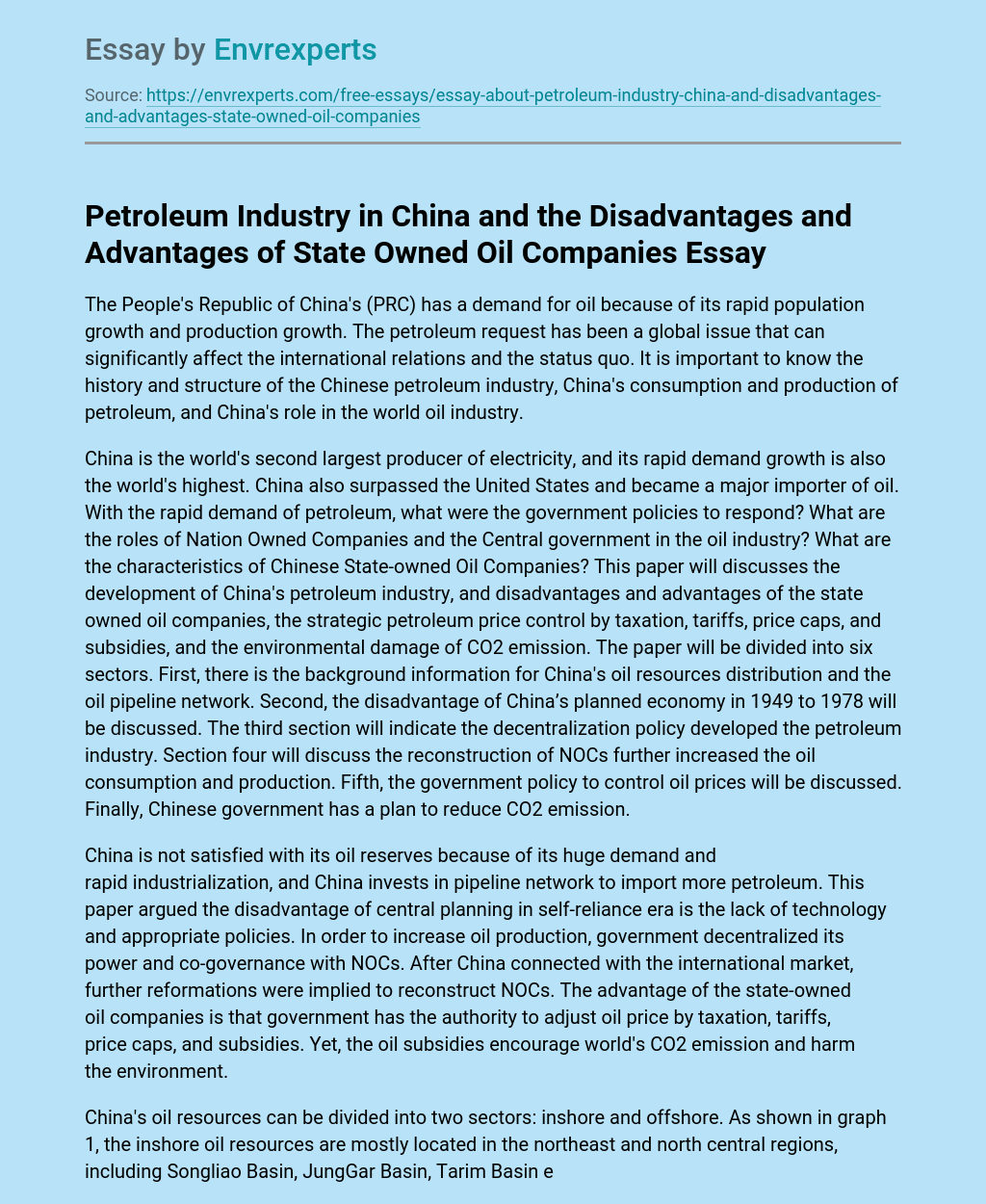