The Phenomenon of Solar Energy and Work With It

Incident Solar radiation or Insolation is the ultimate source of energy on earth. Solar energy can be defined as the process of capturing the energy from the Sun and subsequently converting it into electricity. The energy obtained can then by employed to light up our homes, streets, and businesses, and power our machines Not only is the solar energy is one of the cleanest sources of energy but also a renewable source.

From the amount of energy generated, humanity can theoretically meet all of its energy demands.

Don’t waste time
Get a verified writer to help you with The Phenomenon of Solar Energy and Work With It
Hire writer
$35.80 for a 2-page paper

The most common method used till date to utilize solar energy is by means of a solar cell. Energy conservation refers to the effort made in the reduction of the consumption of energy by the use of a less of an energy service. There are two possible ways of achieving it, either by efficient and judicious use of energy or by employing methods for the reduction in the amount of service used. Energy conservation forms an intergral part of the Eco-sufficiency.

Energy conservation reduces the need for energy services. Subsequently, the benefits can be listed in terms of environmental quality, national security, personal financial security and higher savings. It stands at the top of the sustainable energy hierarchy. It also lowers energy costs by preventing depletion or exhaustion of the future resource by alternatively using substantially available inputs. 2.

Solar Energy harvesting is the process of conversion and storage of solar energy radiated from sun. This stores energy can be stored and used further as per the application demands.

The conversion takes places from the form of heat or light to electrical. The commonly used techniques include- Photovoltaic, Concentrating solar power (CSP), Passive Solar Design. The positive outcomes of the process are as follows: Renewable Energy Source: Solar energy is abundant in nature. It is accessible at nearly all parts of the world and is a non-exhaustible resource.

Alongside the benefits of solar panels, solar energy is a truly renewable energy source. It can be harnessed everywhere, irrespective of location and is available everytime, irrespective of time. Unlike some of the other sources of energy, the source can never be depleted. The availability of this resource exists as long as the existence of Sun and it’s energy Reduces Electricity Bills: Since some of the energy needs can be served by means of solar devices, the electricity consumption through local means can be curtailed. Consequently, a lot of dependency and bills will see reduction. The savings on the bill directly depends on the size of the solar system and the electricity usage.

However, photovoltaics are not efficient enough to store huge amount of energy and generate sufficient electricity. Solar thermal systems consist of a mirror, which helps to direct the sunrays to a particular point to concentrate solar power. This solar power is further used to heat water to produce steam and run steam turbines to generate electricity. This method cannot be applied on a larger scale and does not capture sufficient amount of energy. Natural photosynthesis involves normal photosynthesis procedure carried out by plants in which they store and process light energy to chemical energy. This chemical energy can further be refined to produce fuels.

Apart from the method listed, Sustainably Available Biomass has also been attempted for generating and harvesting solar energy. If sources are to be trusted, 12-19% of the current demand of energy available in the United States can be catered through the harvesting technique with Biomass (food leftovers, agro and forestry wastes, fuel crops, etc.) as the feedstock using Standalone Process. The other motive involves maximum recovery of carbon that ultimately increases the yield of liquid fuel. The development of flexible system for having a platform for energy harvesting stands an equal need.

The reported work in this area includes DEH technique on glass, PDMS channels using syringe pumps. \nSolar energy can be converted to electrical power by the use of solar cells, or photovoltaic devices. There are various factors affecting it apart from the dimensions of the cell. Sometimes, for an efficient system numerous cells are joined in a series combination (modules) and are referred to as solar panels. The solar cells can be classified into three types, based on the generations (times) when they were developed.

Their performance varies in the range of 15 to 20%. They are based on silicon wafers or layers. They are mainly deployed for household purposes and can be seen often on rooftops or terraces. They have a good performance and are stable. However a higher production cost, high intake of energy and rigid structures puts forward a drawback.

They do not use silicon wafers, hence the production and material cost are comparably low with respect to first generation solar cells. The other factor enhances is the flexibility (instead of rigid structure) to some extend. The material used is amorphous silicon, CIGS and CdTe. Their performance is in the range of 10 to 15%. Talking about the disadvantages, they include production process involved, i.e., vaccuum process, high temperature treatments and the use of trace or scarce elements. They all are limiting factors in the design and fabrication of second generation solar cells.

Third Generation Solar Cells: These systems have been modified in terms of material involved. Instead of trace elements, organic materials or polymers are employed. They are sometimes referred in the category of organic solar cells. Notwithstanding the high production price, they still have commercial applications to some extend. An expensive yet high performance multi-junction solar cells is under experimentation and can be explored in many areas. A new class of thin film solar cells currently under investigation are perovskite solar cells. These systems tend to have efficiencies greater than 20% over a small area.

However, simple, quick and large scale production of polymer solar cells or plastic solar cells gives an upper hand to the pervoskite solar cells. Polymer solar cells can be fabricated using industrial roll-to-roll (R2R) technologies similar to the printing of newspapers. Research interest in polymer solar cells has increased significantly in recent years and it is now possible to produce them at a price that enabled projects.

A photovoltaic system is capable of producing power in the micro to Mega range, depending on various parameters. An attempt was made to utilise platforms other than the conventional systems to harvest the energy with or without the use of microfluidic systems, which will be discussed in a later section. Energy obtained from solar panels is usually stored in (rechargeable) batteries or supercapacitors.

The fabrication of solar cells employs high production costs, rigorous processes and use of trace elements and expensive materials. The efficiency has been reported upto 20% in most of the cases. Many of the parameters can be studied and can be implemented onto an inexpensive and flexible platform.

This study showed an alternate approach towards solar energy harvesting through a simple experimental arrangements. However, employing such models for day-to-day applications is still a challenge and needs further investigation. The idea of DEH model was further extended to a poly-dimethyl siloxane (PDMS) based microfluidic platform, which could generate ~118 mV. However, such system needs a pumping unit that may limit the efficiency of the whole process

The Phenomenon of Solar Energy and Work With It. (2021, Oct 31). Retrieved from http://envrexperts.com/free-essays/essay-about-phenomenon-solar-energy-and-work-it 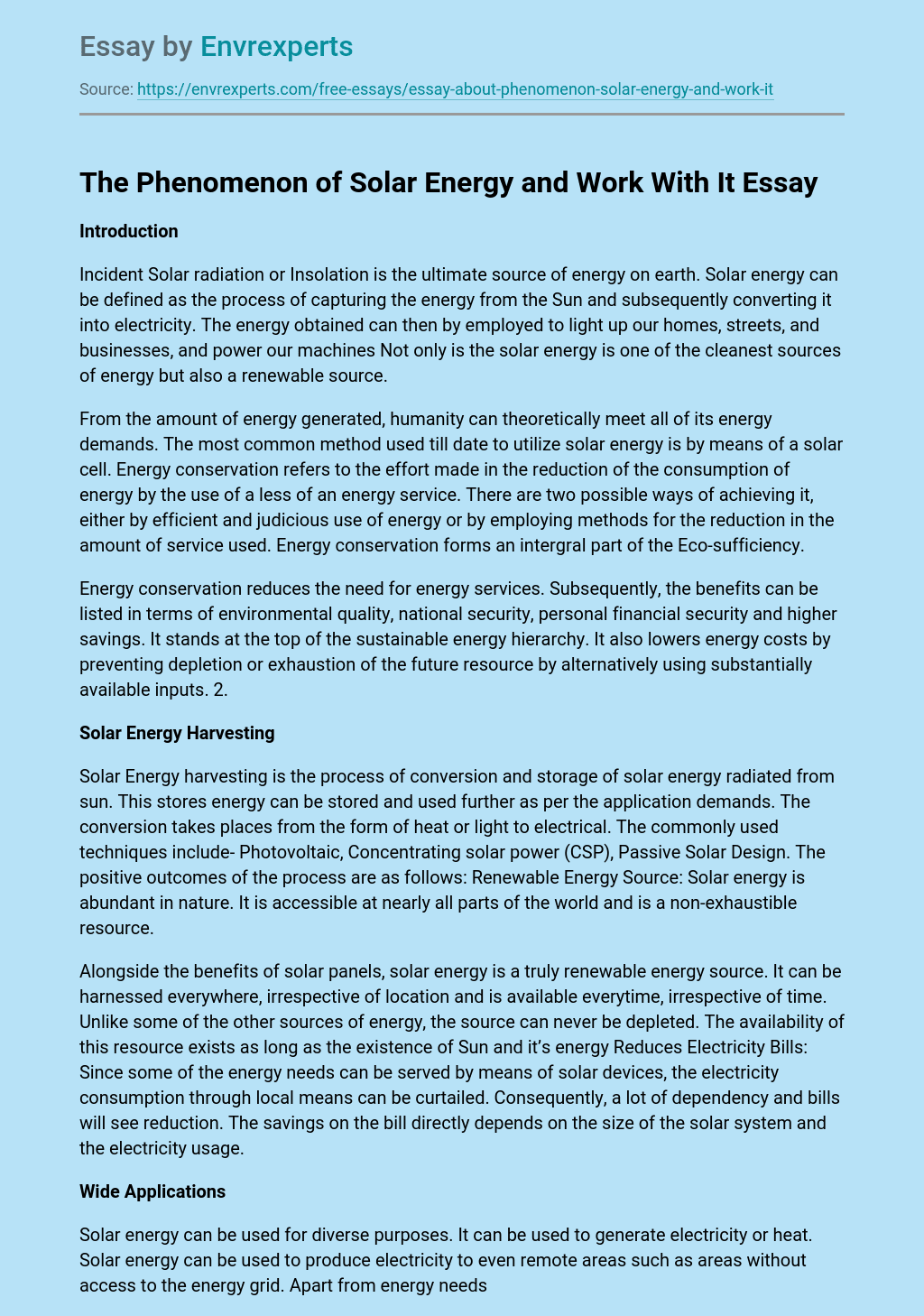