Problem of Plastic in the Pacific

Over the past few decades, human activity has resulted in severely detrimental ocean pollution, affecting marine ecosystems, our communities, and the environment in general. The spread of oil, industrial/agricultural waste, and chemicals continue to harm the Pacific, but plastic remains one of the most destructive forms of pollutions, killing one million seabirds and one hundred thousand marine creatures per year, according to Ocean Crusaders. The same organization also discovered that there are over 5.25 trillion pieces of plastic debris in the ocean, which, as time goes on, will destroy our Pacific beaches, and the home of hundreds of species.

Don’t waste time
Get a verified writer to help you with Problem of Plastic in the Pacific
Hire writer
$35.80 for a 2-page paper

Plastic debris, along with most trash, cannot decompose and therefore remains stuck in the ocean's current for up to 1,000 years, resulting in animals mistaking it for food or hurting themselves with the dangerous waste. This slowly kills organisms over a long period of time, disrupting the species, and all other species in it's food web. Turtles, dolphins, fish, sharks, crabs, and seabirds are just a few of the 660 types of marine animals that are critically harmed by human plastic pollution.

The revolving currents of floating debris or "garbage patches" according to researches result in vortexes of trash, primarily plastic. A study was recently conducted at UC Santa Barbara's National Center for Ecological Analysis and Synthesis, in which lead author Jenna Jambeck organized contributions from experts in oceanography, waste management, and plastics materials science. The research concluded that 4.8 million metric tons of plastic waste enter the oceans from land each year.

To put that into perspective, one metric ton is equal to 2,205 pounds.

To begin our study, we decided to determine how the buoyancy and location of certain plastics affect where they are most commonly found in the ocean, revealing which animals are consuming which plastics and what organisms are most at risk. Density is the ratio of a material's mass to its volume, so by dividing each object's mass by its volume, we were able to determine where it would lie in the water column. We proceeded to submerge several categories of plastic in water to mimic the ocean column, recording which sunk and which floated. After we recorded the densities of each plastic and it's behavior in water, we moved onto what this information tells us about plastic's affect on marine organisms. We began researching the oceanic zones of marine life to further study plastic's impact on the ocean's ecosystem. The surface zone is where the water meets air and things float where they can be seen by certain animals. Below the surface, is the pelagic zone or the open water column where fish swim and plankton drift. Then at the bottom lies the the benthic zone, which is on or near the ocean floor. Through the results of our experiment and meticulous research focused on the organisms in each oceanis zone we were able to determine which man-made objects are being ingested regularly by which animals. Polystyrene, which makes up CD cases, egg cartons, disposable plates and cups can either sink or float, meaning it often harms surface level organisms like gull and albatross, as well as benthic feeders like octopus, otter, or bass in the Pacific. Polyethylene terephthalate, found in water bottles, peanut butter containers, etc, and Polyvinyl chloride, found in clear food packaging, medical equipment, windows, shampoo bottles, etc, both sink, becoming the unfortunate meal of benthic feeders. High-density polyethylene, which makes up milk jugs, detergents, household cleaners, and some garbage bags, along with low-density polyethylene, which makes up squeezable bottles, various bags, clothing, and furniture, float, proving fatal to surface and pelagic feeders like gulls, turtles, albatross, etc. When you think about it this way, its impossible to ignore the adverse effects of human plastic pollution on the ocean life, particularly in the Pacific.

There is no straight-forward way to reverse the damage we have already none; however there can be steps taken individually to reduce plastic footprints and preserve marine life while keeping Santa Barbara beaches clean, reducing plastic and trash habits with reusable grocery bags, containers, water bottles, straws and restraining from purchasing heavily packaged products is a great way to start. In Goleta and Santa Barbara, it is as simple as heading down to the beach and cleaning up or joining a local clean-up near you on International Coastal Cleanup Day. Supporting organizations and regulations that address plastic pollution such as the plastic bag taxes or bans are an obvious, but effective method as well. After interviewing an expert, Community Outreach/Education coordinator for Plastic Pollution Ocean Jessica Scheeter, we learned even more about how the severity of plastic pollution. "Single-use plastics are designed to be used for minutes, but end up taking hundreds to thousands of years to break down," Scheeter says, "Plastic that ends up in the ocean photodegrades into smaller and smaller pieces called microplastics." Though it is not just marine life that is being harmed, Scheeter says “Studies are now exploring implications for human health because microplastics absorb toxins which are moving up the food chain and into fish that we consume. To reduce plastic ocean pollution, people can rethink their use of single-use disposable plastics and choose reusable alternatives.”

Problem of Plastic in the Pacific. (2021, Oct 31). Retrieved from http://envrexperts.com/free-essays/essay-about-plastic-pacific 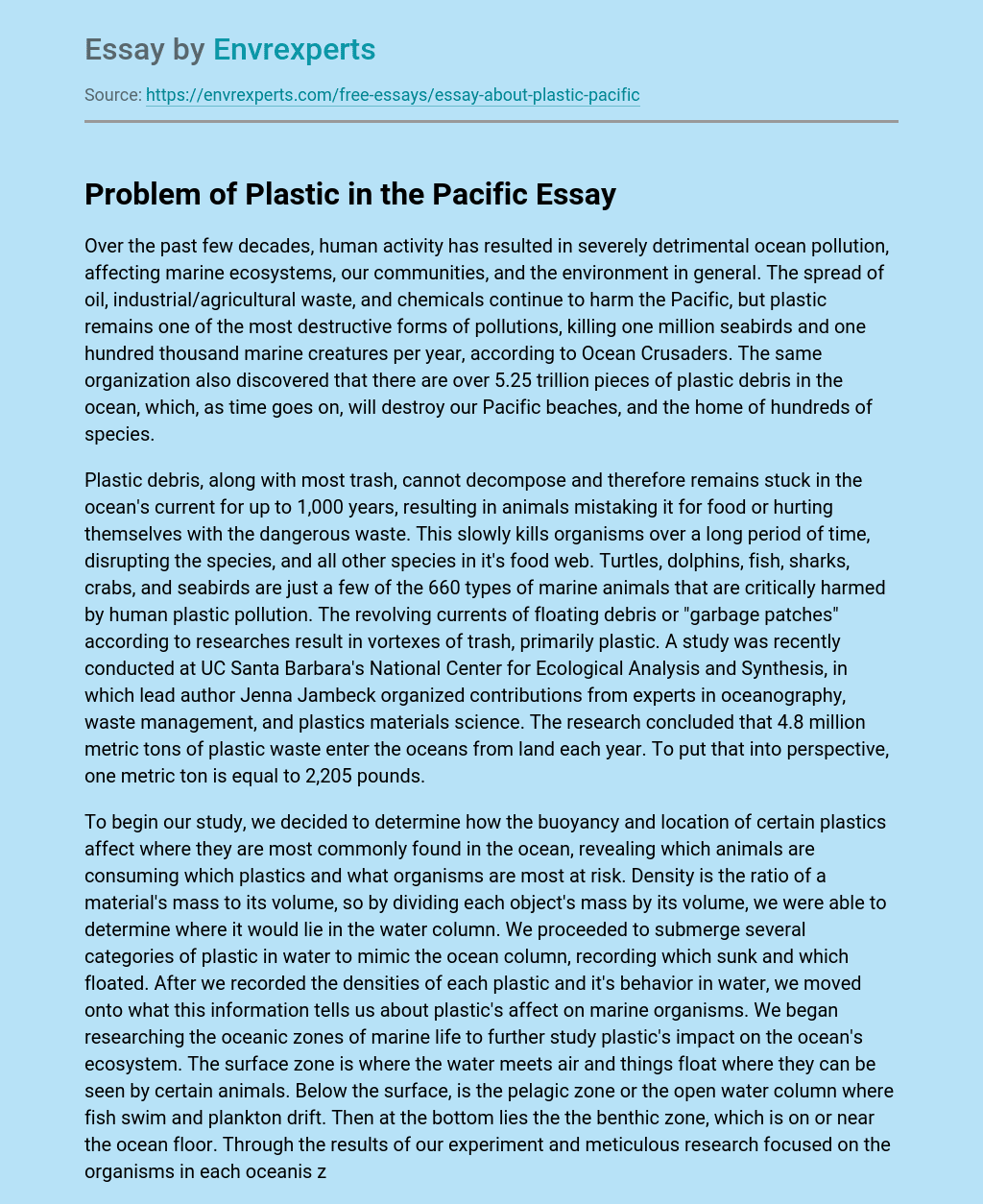