Plastic Pollution in the Ocean

Over the last 100 years since plastic was invented, it has infiltrated our lives to the point where it is everywhere. Plastic is in the toys, clothing, grocery stores, toiletries, furniture, and its impact on the environment and human health is immense. One of the biggest issues resulting from such an abundance of material is what happens after its disposal. It is estimated that about 8 million metric tons of plastic enter our ocean, where it further breaks down into tiny harmful pieces called microplastics that get digested by the marine life, and later on become a part of the human diet (Kurzgesagt – In a Nutshell, 2018).

Don’t waste time
Get a verified writer to help you with Plastic Pollution in the Ocean
Hire writer
$35.80 for a 2-page paper

Plastic pollution in the ocean not only damages the marine life destroying vital ecosystems, but it also threatens the human health, and if no action is taken to address the problem, we face a future with more plastic in the ocean than fish by 2050 (“Plastic pollution affects bacteria that aids in oxygen production,” 2019).

There is no denying how remarkable of a substance plastic is.

It is cheap, easy to produce, and its many applications led to advancements in fields like medicine and technology. However, the abundance of single-use consumer goods has led to our inability to completely dispose of them resulting in it littering our landscapes and polluting the ocean. With a lifespan of merely hours, plastic persists to pollute the environment for much longer than that. Studies say that 80% of the marine litter comes from land-based sources like urban run-off; trash from construction, ports, industrial facilities, landfills, and intentional garbage dumping.

The rest sources from offshore ships and platforms (The Problem of Marine Plastic Pollution, n.d.). According to a National Geographic study, plastic production has increased from 2.3 million tons in 1950 to 448 million tons in 2015 and is expected to double by 2050 (Parker, 2019). As plastic floats in the ocean, it breaks down into small particles (less than one fifth on an inch across) called microplastics that spread throughout the waters and have been found in every corner of the globe. These tiny pieces have been confirmed to cause health problems negatively impacting not only the marine but also human life, further proving that ocean pollution has become a global crisis we can no longer ignore.

Since the marine life (phytoplankton, kelp, and algal plankton) in the ocean produces 70% of the world’s oxygen, needed for all organisms to exist and the Earth to thrive, it is imperative to discuss the implications that plastic pollution may have on life on this planet. Plastic’s dispersal throughout marine ecosystems has according to a Clean Water Action report, affected at least 267 species like sea turtles, sea mammals, and fish. Many of the animals mistake the plastic floating in the ocean as food and die out of starvation due to the swallowing of the indigestible material decreasing the population of already endangered species and ultimately leading to the destruction of entire ecosystems that depend on said animals to survive. Unfortunately, the reduction in the number of animals is not the only implication of plastic in the ocean. The constant exposure to UV radiation results in the plastic breaking into microplastic containing harmful chemicals like BPA (Bisphenol A), PCB (polychlorinated biphenyls), or DEHP leading to its absorption by the sea life. Since fish constitute a big part of human diet, seafood becomes a major route of human exposure to microplastics. The toxins are known to cause liver problems, immune system problems, cancer, hormonal disruption, and childhood development issues.

Moreover, plastic pollution may have widespread ecosystem impacts, beyond the known effects on macro-organisms, such as fish and sea turtles. Researchers from Macquarie University in Australia have found that microplastics can negatively impact the ocean bacteria Prochlorococcus, which besides producing 10% of the world’s oxygen is also a vital part of the marine food web. Prochlorococcus is a phytoplankton that produces oxygen as a byproduct of photosynthesis, a process that converts carbon dioxide and sunlight into sugars that organism use for energy. According to the study, the exposure to the plastic pollution chemicals leached from gray plastic grocery bags, decreased the bacteria’s photosynthesis ability, resulting in a decline in oxygen production rates beginning 24 hours into exposure (“Plastic pollution affects bacteria that aids in oxygen production,” 2019). If not stopped, plastic pollution will not only result in a reduction in the population of marine life, and therefore, in shortage of food for both animals and humans, but also make it harder for us to breathe. The consequences are just too great to be ignored.

Transitioning from an economy that simply makes, uses, and then disposes into a one that’s based on the idea of using, recovering, and reusing is the only way to limit the amount of plastic used in society and to make sure no more garbage ends up in the ocean. It is said that 40% of global plastic production is packaging that’s used only once and then discarded. This means that roughly 161 million tons of bags, takeaway boxes, and bottles are thrown away after a single-use. As humans, we tend to be irresponsible about cleaning after ourselves, not realizing how even a single piece of trash contributes to the ever-growing pollution problem. Every person should take responsibility for their actions and significantly limit the use of plastic. It can be in the form of buying second-hand products, using reusable bags when shopping, carrying reusable water bottles, using paper straws, or just recycling whenever possible. Since education spreads awareness, it’s a perfect way to enact change. Talking to family, friends and even neighbors about the current state of the oceans and the implications towards not only the marine life but to the environment and us humans, help people recognize the magnitude of the problem. Additionally, designing and installing engineering systems that use the currents and solar energy to collect the debris being deposited in the ocean, is the future to making sure the crisis doesn’t get more out of hand than it already is. By using innovative projects, companies like the Ocean Cleanup strive to clean up 90% of ocean plastic pollution.

The continuous human disregard for the overwhelming amount of plastic pollution in the ocean isn’t just going to impact marine life, but the entire ecosystem. The consequences of the overabundance of synthetic material in the ocean can already be seen today, with animals dying by mistakenly eating plastic, the levels of oxygen decreasing, and the human health implications caused by the consumption of harmful chemicals through seafood. The repercussions of producing such extreme numbers of plastic products and not being able to dispose of them in a way that is not harmful to the environment are simply too dangerous to ignore. Humans are only one out of over 8 million species of animals on this planet, and yet they cause more harm to it than all the other species combined. It is the responsibility of those who make the mess, to clean it up, and because letting the ecosystems collapse would mean the collapse of the human race, refusing to fix this major problem, is without doubt, not an option. In order to put an end to the ever-growing accumulation of plastic, people have to make adjustments to their economy, start educating people about the importance of marine life and most importantly understand the huge difference a single person can make. Every big change that has ever occurred started with one person speaking up, and the rest of the people uniting together. Quick lifestyle changes and the consolidation of nations on how to fight this problem, is what Earth needs right now. By recognizing the problem and working together to fix it, it’s not too late to save hundreds of endangered species of animals from becoming extinct, and it’s not too late to save human’s only home. However, to do so it is crucial to truly acknowledge the threats overabundance of plastic in the ocean imposes on the entire planet. At the end of the day, all it takes to make sure the Earth stays safe is the willingness to do better.

Plastic Pollution in the Ocean. (2021, Oct 31). Retrieved from http://envrexperts.com/free-essays/essay-about-plastic-pollution-ocean 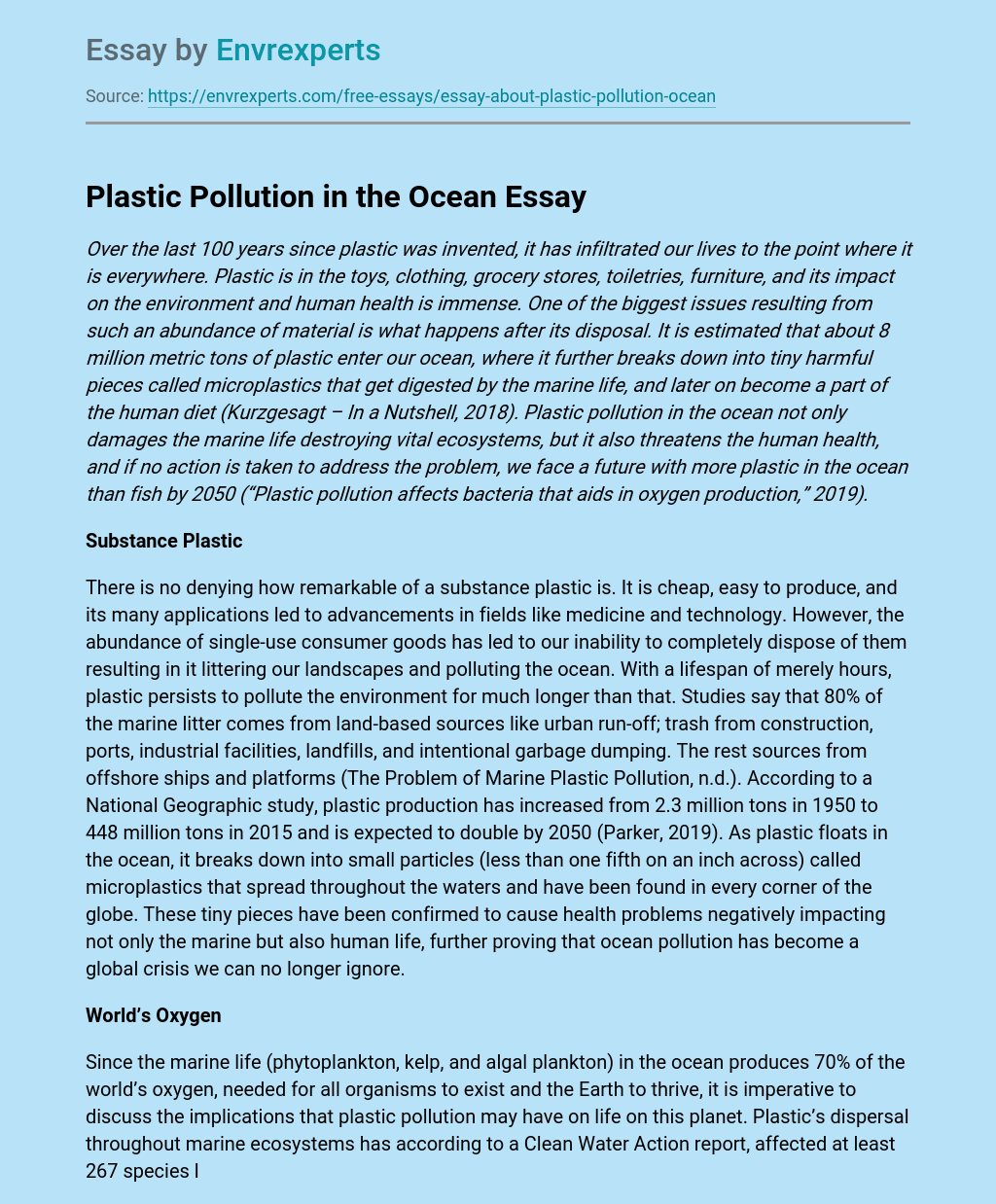