For a very long-time people have associated themselves with certain groups. There have been different organizations that hold certain beliefs, and it has been up to the citizens of the United States to vote in order to choose who is seen as a leader and what group of people are left to make important decisions. Democrats and Republicans are a prime example of those groups. Although the president is technically the leader in America, he belongs to one of those groups and that is how it has been for a very long time.

Don’t waste time
Get a verified writer to help you with Pluralism and Environmental Protection
Hire writer
$35.80 for a 2-page paper

That is the same way it works with the vice president, governors, and mayors as well. Members of the same political party that have different ideological takes on a said issue, and although that sometimes causes a bit of trouble, the federal government shutdown December 22, 2018, until January 25, 2019, it is just how America works.

There are women, people of color, and people of all backgrounds in offices all over the country, in the white house, and at the Pentagon to making political decisions, and setting policies. Pluralism is considered a key element of democracy, and that as a country we are. Pluralism has an understanding that in some cases, the acceptance, and integration of minority groups, must be achieved and protected by legislation, like Civil Rights Act of 1964 and the Voting Rights Act of 1965.

We have even had our first black president. It took some time to get here but people of all races, males, and females, are all able to vote and have a place in congress.

Pluralism even exists outside of office, politics and leadership. America is a country that is a melting pot of different races, backgrounds, and beliefs. That is what binds this country together. When we examine and thing about what pluralism is, it becomes really easy to show how we see pluralism in our everyday lives. Native American tribes have separate governments, religions, schools, and communities that allow them practice and live out their traditions and histories in peace. There are so many cities in the United States have areas referred to as Little Italy or Chinatown, where people from those countries keep their traditions, and show younger generations to make meals and dishes or participate in festivities that would normally take place in their country of origin. Amish people even live alongside those who are not Amish, but travel by horse and buggy, do not have electricity, and have established stores, schools, and other organizations that are used by members of their community.

What about our environment? When environmental groups decide that there is a need for a new law or practice because of pollution, they try and compromise with chemical companies. People from the public voice their opinions, alongside the Environmental Protection Agency and members of Congress. Any law that comes about is a result of various groups speaking up and is therefor an exercise in pluralism. We have all heard the words “can we all just get along?” In a nutshell, that is what pluralism is. It is people of different beliefs, backgrounds, and lifestyles can coexist in the same society and participate equally in the political process. Pluralism makes the assumption that its practice will lead decision-makers to gather solutions that contribute to the “common good” of the entire society, not just one group or one person. There is no elite person, or group of people that rules America. There may be some advantages, and some unfairness between the elite and the minority, but there still isn’t one ruler or group of people that rule America. 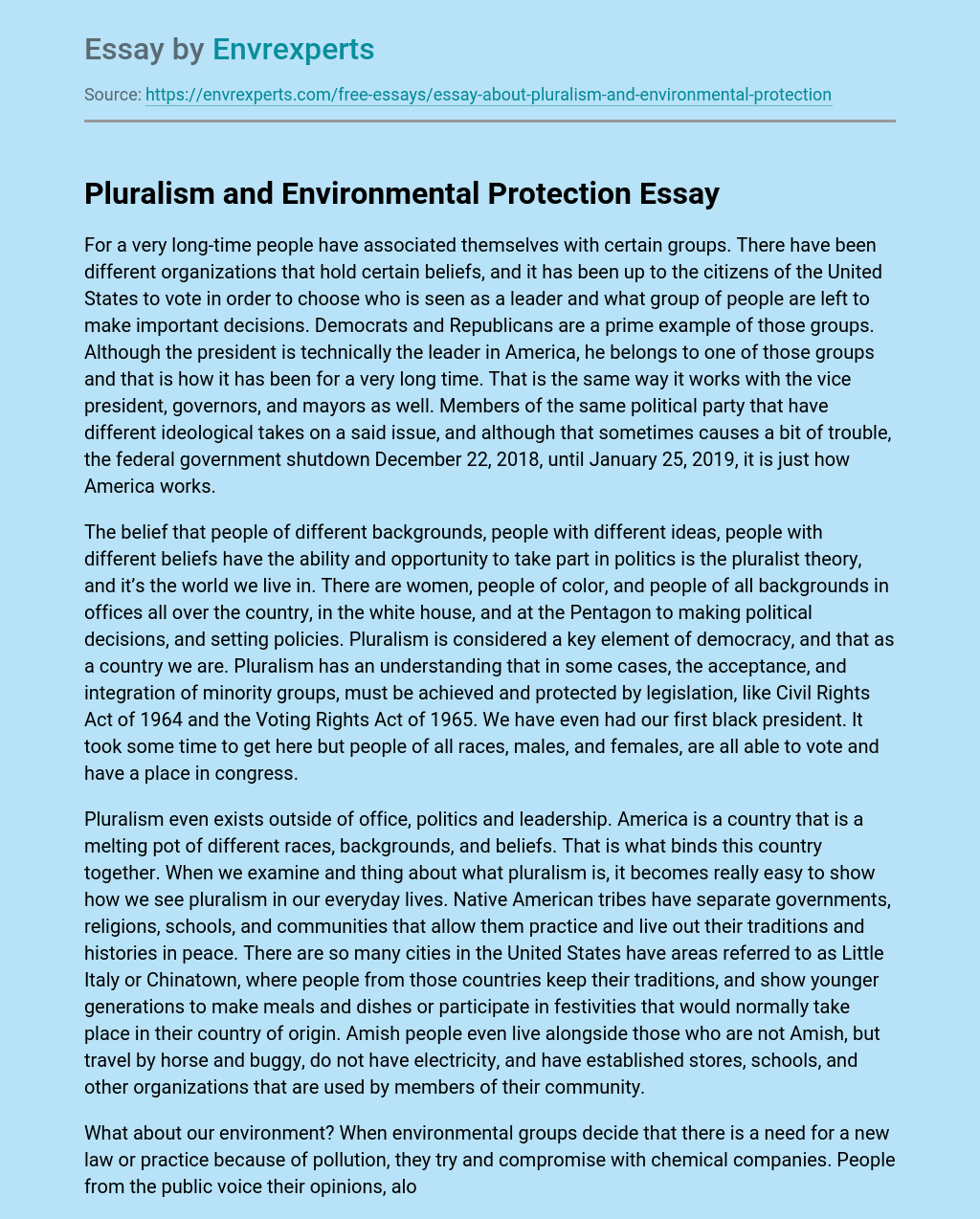