Pluses and Minuses of Geoengineering

It is horrifying to think that with each passing day, we tumble closer to the end of the world. But even in a utopia, this fact would be true. Consequently, in our less-than-perfect world, there are many factors that speed up this process. Climate change, for example, has become a pressing issue that could result in dire consequences for both humanity and the Earth. Humans place the environment under constant stress, and considering that one year in relation to all time is the blink of an eye, significant change occurs at rapid rates.

Don’t waste time
Get a verified writer to help you with Pluses and Minuses of Geoengineering
Hire writer
$35.80 for a 2-page paper

Geoengineering is a technique that was created to intervene and reverse some of our negative effects on the climate. In the minds of those educated about this topic, there is always the constant reminder that the longer we wait to act, the more looming and disastrous the consequences will be.

Geoengineering is very underdeveloped, but has attracted more attention than most other modern controversies. Anyone who is involved falls into one of two categories: those in favor of furthering research, and those who are opposed to all forms of geoengineering? The two extremely divided groups are just one reason why this topic is so controversial.

Additionally, research and execution are expensive, and the topic raises several human rights and governance issues. Some experiments have also attracted controversy: In July 2012, for example, 100 tonnes of iron sulphate was deposited into the Pacific Ocean, off Canada's west coast, in an attempt to help restore salmon stocks there. The move outraged environmentalists who oppose ocean fertilisation.

In the words of Dr Matt Watson of Bristol University, the issues surrounding geo engineering are "really really complicated". As a result, even though the idea of geoengineering gained traction several years ago, proposals on a global scale have failed to take shape. Mostly, the widely conflicting perspectives and lack of information lead to a delay in the progress of geoengineering.

What little information there is about geoengineering can be summed up into a list of possible techniques. What is most elusive about this topic are the pros, cons, and risks. In the words of Professor Steve Rayner of Oxford University, "it is easier to devise the technology than to understand its effects or how its use should be governed". For now, only small-scale geoengineering tests can take place as long they do not affect biodiversity, a rule agreed by the UN Convention on Biological Diversity in 2010. Organized according to safety and effectiveness in the chart below are several of the most common techniques in the field. They are organized into two groups: Solar Radiation Management (SRM), which involves reflecting the Sun's rays away from the planet back into space, and Carbon Dioxide Removal (CDR), which aims to remove the CO2 already over-abundant in the atmosphere. The tactics included in the chart, categorized by type, are SRMs (Albedo enhancement, Space reflectors, and Stratospheric aerosols), and CDRs (Afforestation, Biochar, Bio-energy with carbon capture and sequestration, Ambient air capture, Ocean fertilisation, Enhanced weathering, and Ocean alkalinity enhancement)”. This list might seem long, but the most valuable information, the positive and negative impacts of these techniques, is still years of research away. A major report in 2009 by the UK's Royal Society even suggested that "CDR and SRM geoengineering methods should only be considered as part of a wider package of options for addressing climate change"

Obviously, geoengineering itself is still in formulation. A list of options cannot help make decisions about the practicality, safety, and necessity of this broad topic. Still in its embryonic state, geoengineering is often misunderstood and details are fabricated to fill in the holes. For example, it is misconstrued that geoengineering is meant to be used in place of milder techniques. In truth, it is only meant to be a safety net, working alongside with other climate intervention tactics. Rose Cairns, from Sussex University, wrote a report for the Economic and Social Research Council (ESRC) on the area, in which she says that geoengineering remains an extremely ambiguous term because the technology is so diverse'. The core problem is that the atmosphere is overloaded with heat-trapping carbon dioxide, and there are hundreds of thousands of solutions that can help prevent and slow climate change. Spraying aerosols into the stratosphere, for example, could be "highly controversial", while a global project to plant trees is likely to cause much less furore". Professor Piers Forster, from the University of Leeds, explains that "If we want to suppress global warming the only game in town at present is reducing greenhouse gas emissions"/

However, despite the risk of catastrophic side-effects from geoengineering, the study authors believe that research should continue just in case climate change leaves no other options. Steve Rayner of the Oxford Geoengineering Programme in the UK says that it would be "irresponsible for us not to explore the potential to understand the technologies as best we can". Additionally, Professor Forster says, "If we were in a really desperate situation, trying to cool the temps for a 10-20 year time period, there could be some merit in those circumstances in introducing solar radiation management to give you a 10-20 year time period". Put simply, geoengineering is a much-needed fallback that could serve to extend our time here on Earth, and give us more of a chance of survival if something really bad were to happen. Limited research and global controversy makes it very difficult to even consider these possibilities.

To make things more complicated, both sides of the controversy offer justifiable opinions. The human rights aspect of geoengineering is a real problem, but without real research, we will never truly know if this problem could be avoided. Intellectual Ventures, founded in 2000, is one of the only groups which supports geoengineering. It funnels down into a small group of scientists who receive funding from billionaires like Bill Gates, Apple, Intel, Google, and Sir Richard Branson. They support more research of these techniques before they are used, but they also advocate the immediate exploration of these techniques, before the climate problem becomes more dire. Conversely, groups like the Bonnefire Coalition (founded in 2009) feel that climate intervention is dangerous and misunderstood, and have resolved to bring education and awareness to the public, as well as to bring up geoengineering issues on the floor of Congress and in the media, schools and homes. They completely dismiss any mention of research and believe that geoengineering should not be considered at all. Neither of these groups, however, can really tell much about geoengineering itself, and that is the aspect of this controversy which is the most perplexing. Each side justifies their beliefs with valid claims, but do arguments and parleys help if the topic is hardly developed enough to analyze?

There are several groups that have identified and attempted to solve this issue. The Intergovernmental Panel on Climate Change, a part of the United Nations, and the Environmental Defense Fund, a nonpartisan group, believe that more knowledge is needed before any decisions can be made regarding geoengineering techniques, and that there must be an open and continuous discourse between the scientific and policy making communities. They understand and support both perspectives of the more extreme groups, which has served for more productive advances in the field of geoengineering. Considering that both climate intervention and global warming would no doubt affect every person alive, it would best to have a solution sooner rather than later. Arguing that the 'fate of the global climate should not be concentrated in the hands of a few is meaningless until actions are taken to counter this issue; but, only the aforementioned groups seem to realize that they can be part of that solution".

These large corporations are also much calmer in reacting to geoengineering than common people. Because geoengineering has such personal implications, it has become a popular topic of debate among the interested public. Comments on geoengineering blogs and news reports range from small books to single exclamations: Civilians have even gone so far as to comment on websites of national environmental committees like the IPCC, the Royal Society, HAARP, and Intellectual Ventures. For example, Sam S commented on the Yale Environment 360 website, saying “It's astounding that these air capture technologies all have their hands in the continuation of one of the extractive energy industries most responsible for emissions! How is that not contradictory?". It is hard to ignore such resounding and striking comments, even though the public has very little real knowledge of geoengineering. As I mentioned before, this can lead to misconceptions about the purpose of geoengineering, as illustrated by a comment on "The Equation" by Richard Solomon: "CO2 removal and sequestration are another example of the extent to which people are invested in sustaining their current lifestyles with the practically unmitigated use of fossil fuels… Denial of a problem and resistance to change are powerful mechanisms!". This fiery resistance to geoengineering has even gone so far as to manifest in the form of a petition, entitled "PETITION AGAINST GEOENGINEERING/SOLAR RADIATION MANAGEMENT/CHEMTRAILS/HAARP/WEATHER MODIFICATION”. The overall request of this demanding ‘entreaty' is as follows: “We, the undersigned, are requesting U.S. Congresspersons, Senators, and other Government employees and appointees to address the issue of ongoing geoengineering and HAARP activity that is taking place without the consent of the population. We are demanding that our government disclose information about such activity… We owe it to the next generation and all future generations to disclose the United States role in geoengineering and HAARP and to demand that it be TERMINATED IMMEDIATELY!".

This alone is not enough for the “undersigned”: they also comment on the petition, leaving behind their own input on the geoengineering issue. Someone from Pacifica, CA writes: "I don't understand how our government can do this to it's people and to the earth and animals that live here. So sad." Additionally, Someone from Honaunau, HI writes: "Stop immediately!!! insane and against every human right!". People are allowed to have these opinions, but it is necessary to consider the amount of fact that they are really based on. In reality, there is not enough published research on geoengineering to form such convictions. Therefore, something else must be fueling the fire: perhaps fear of climate disruption, commitment to risky tactics, or (especially) universal destruction provokes a large part of the controversy surrounding geoengineering. Fear can not only blind people from the advantages of something, but can also make them resistant to knowledge or change. Overall, it would benefit us all to be calm, collected, and logical about the research and consideration of geoengineering.

In conclusion, I believe that the pros outweigh the cons of geoengineering, simply because there are so few of them. To me, it is a choice between research, or no research; safety, or no safety; Earth, or no Earth. I do not see any disadvantage to gaining more knowledge on a topic which could eventually postpone the apocalypse. After all, how long can we wait to stop waiting? Ending with a quote within a quote, I believe that Marc Gunther from Yale said it best: “Given the obstacles ahead, most everyone who has looked at carbon dioxide removal warns that the technology cannot be seen as a license to keep burning fossil fuels. As Steve Hamburg, chief scientist at the Environmental Defense Fund, puts it, “We've got to mitigate emissions — that's first, second, third and tenth.” But until we do, coming up with a backup plan can't hurt”

Pluses and Minuses of Geoengineering. (2021, Oct 31). Retrieved from http://envrexperts.com/free-essays/essay-about-pluses-and-minuses-geoengineering 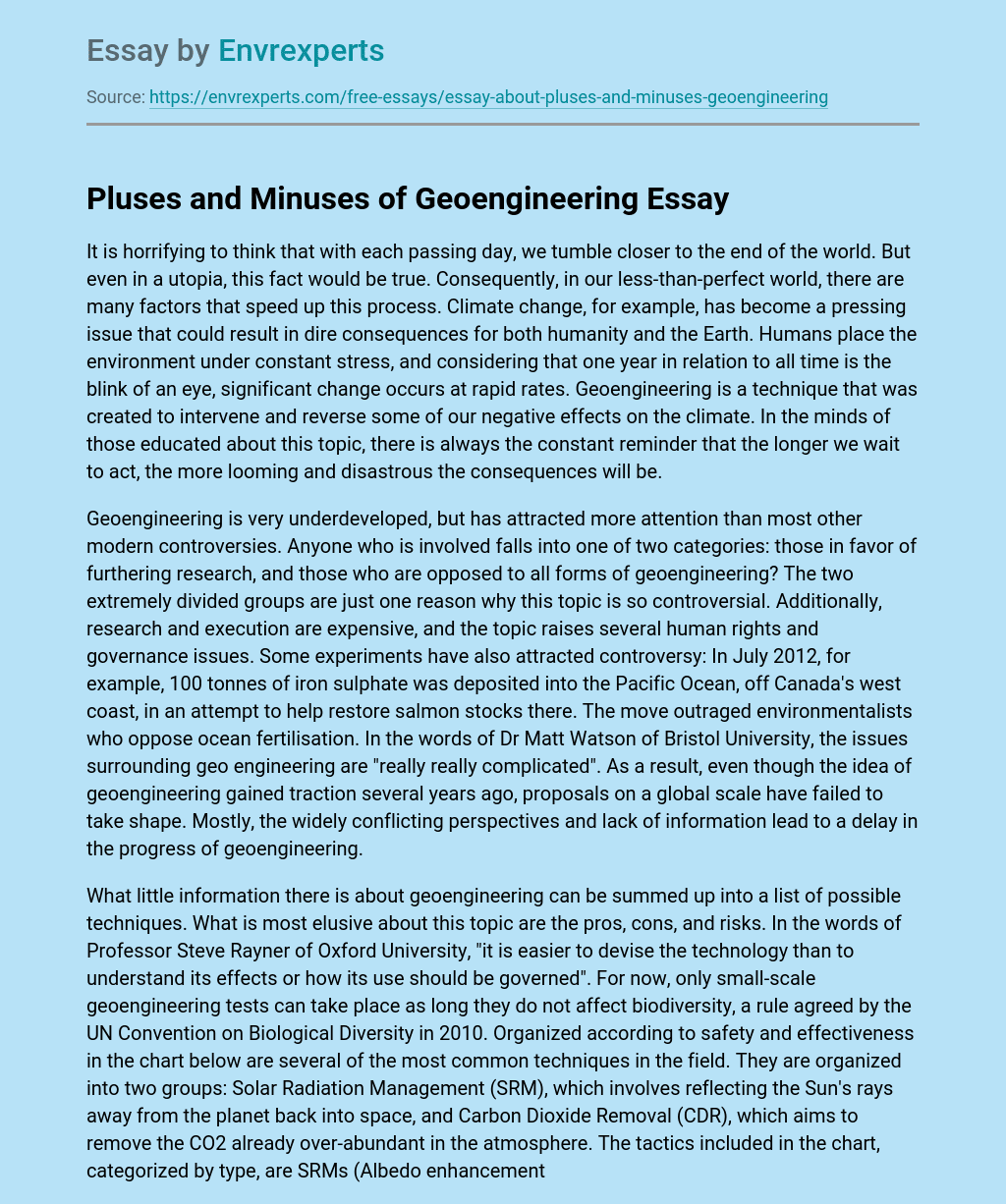