The Political and Economic Consequences of the Energy Crisis in Chile

Chile is facing an energy crisis. Different reports and investigations made during the last few years have established that the current capacity of the Chilean energy grid is not going to be able to sustain the projected energy demands of the future. One of the most important and controversial proposed partial solutions consists in the construction of five hydroelectric plants in the Chilean south, more specifically in two big rivers located in the Aysén region. This project, labeled HidroAysén and promoted by the overseas companies ENDESA and Colbún, is designed to provide the Central Interconneted System (SIC, based on its Spanish initials), with 2750 MW of power by 2020, which is equivalent to roughly 20% of the total energy that the system would be in conditions to produce by then.

Don’t waste time
Get a verified writer to help you with The Political and Economic Consequences of the Energy Crisis in Chile
Hire writer
$35.80 for a 2-page paper

With Chile importing almost 70% of the energy it consumes nowadays, and hydroelectricity being a much cleaner alternative to coal and natural gas combustion, the project has many important advocates, particularly central government figures such as President Sebastían Piñera.

Nevertheless, the idea has ignited a lot of controversy, and after being approved in 2011, it was put on hold in 2012 due to protests by the citizenry, which was in general not persuaded by the apparently strong arguments in its favor. It turns out that, far from being irrational, the people have been able to demolish the arguments of the government, and have demonstrated that the project is far from being an ideal solution to the crisis.

If allowed to proceed, the construction of the dams will produce irreparable damage. As it stands now, HidroAysén is scheduled to flood 5910 acres of natural reserves and another 2812 acres would see themselves affected due to the labors associated to its construction. It would virtually destroy 6 national parks, 11 national reserves, 26 priority conservation sites, 16 wetlands, and 32 protected private areas, apart from leading to the relocalization of 6 Mapuche communities. Furthermore, 3000 km of electrical wiring would need to be installed in order to transport the energy produced to the SIC, and the arrival of more than 2000 workers to a zone that has a population close to 3000 would produce social effects that would probably be irreversible, considering too that these workers would have to remain in place for more than 11 years. Rivers and their ecosystems would also be profoundly affected.

The potential economic and political consequences of the project are not encouraging either. If it is approved, the companies ENDESA and Colbún would be able to establish a duopoly on the nation’s energy production system, as they would come to own 80% of the Chilean energy production grid. The immense power that the companies would potentially be able to wield is dangerous, especially because they are only interested in profiting, and energy is a vital resource for the population. It is not hard to imagine this kind of situation leading to disaster, such as the one suffered by the Bolivians in the infamous Cochabamba water wars at the end of the 20th century.

In face of the abundant negative consequences that this operation will surely have were it given the go-ahead, the fact is that it still exists, and it is possible that it gets approved in the near future. After all, Chile is facing an energy crisis, at least according to the official reports made by the government. If the production capacity of the energy grid is not increased by 8000 MW by 2020, the SIC will not be able to meet the projected energy demand for the nation. The implementation of non-conventional renewable methods of energy production, such as those based on harvesting eolic or thermal energy, appears not to be viable in the short term as these presumably would not be able to generate the needed power in such a short period of time. So it looks as if Chile has no choice but to approve projects such as HidroAysén, in lieu of risking important damage to the country’s economy that would go along with the unrestricted import of energy from abroad. However, some independent studies have determined that the annual rate of increase of the nation’s energy demand is not as high as the government believes it to be i.e. they predict that the figure is around 4%, and not 6-7% as the government thinks it is. If this is true, then the available solutions to the problem become much more varied, and the implementation of non-conventional renewable energy production strategies, supported with small hydroelectric and thermoelectric projects of low environmental impact, becomes much more plausible. Let us hope that the fact that the HidroAysén project has been on hold for almost two years already is an indication that the government has changed its mind and is considering the points of view of environmentalists and the citizenry in general as seriously as it needs to consider them.

The Political and Economic Consequences of the Energy Crisis in Chile. (2021, Oct 31). Retrieved from http://envrexperts.com/free-essays/essay-about-political-and-economic-consequences-energy-crisis-chile 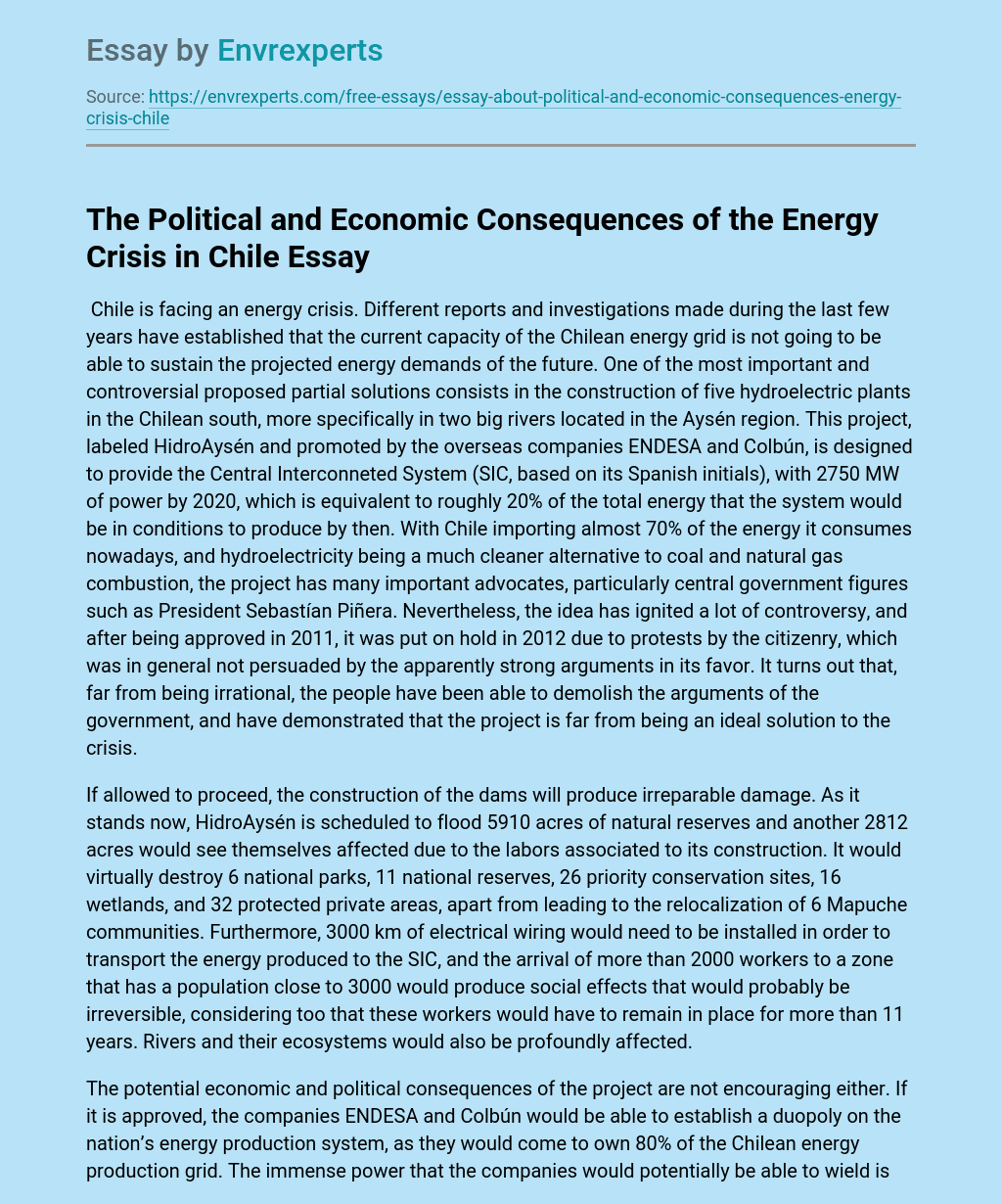