This is a paper about politics behind climate change, and possibly economy effect of climate change. Scientific evidence suggests that climate change is a serious threat to our society and the larger environment, while the media have been involved in shaping public perceptions and climate policy agendas as well.

But, over the past few years, most political leaders if not few are now aware of the hazards posed by climate change and the need to respond to climate issues confronting us.

Don’t waste time
Get a verified writer to help you with Politics Behind Climate Change
Hire writer
$35.80 for a 2-page paper

Politicians and the media must embed climate awareness to our institutions and everyday concern of communities for the reasons just mentioned.

Now here is the catch, industrial countries like the United States pump most emissions into the atmosphere and most take responsibility for controlling them in the future and must take lead to reducing emissions, move towards a low-carbon economy and with these changes will have to be integrated. But if this cannot be achieved, who else can (Anthony G.

However, public sentiments about climate change has become so polarized and contentious to the point where basic scientific evidence has been refuted by those opposed by efforts to reduce greenhouse gas (David E. Kitchen, 2016). How are questions being addressed at the level of international relations?- If politics stand in the way of scientific progress, then how dare we reduce greenhouse gas emissions already present in the atmosphere?

Policy makers and stakeholders in the United States and around the globe should have the sense of urgency to address key scientific questions that plague global climate over the past decades.

The prevailing issue is not just the economy costs of climate change if ignored, it is the future of our planet and for those who will inherit the Earth generations to come.

International Panel of Climate Change (IPCC) should address how greenhouse gas emission are likely to change the future and should weigh the economic, social and environmental cost of future climate change especially in the developing countries. (David E. Kitchen, 2016). How is the climate change debate in the United States being framed by political parties and interest groups?

To follow up on the polarization and the point of contention where basic scientific evidence has been refuted by those who opposed it; powerful interest groups often stand in the way of reform and they have tried to derail negotiations and counter the influence of environmental talking point. In collaboration with their political allies, they have funded their political campaign with anticipation that political leaders set the rules how greenhouse gases are released into the atmosphere and positioned to block most climate legislation in the congress in favor of these interest groups.

Meanwhile, we can and should do our best to encourage a surge of technological innovation in response to both climate change and energy security (Anthony G., 2009). And with such innovation it is likely we can break our dependency on fossil fuels and the major sources of environmental pollution in the spirit of ending climate issues.

What Can and Should Be Done? Although no quick fix is available to deal with climate problems, but we must first acknowledge what people do through consumption and production decisions. Emitting Greenhouse gases accounting for around three-quarters of human-generated global warming effect, and effects on species are variety of ways potentially transform the physical and human geography of the planet (Nordhaus, William D. 2007).

So, the question is, can we wean ourselves off fossil fuels? Winds and solar power or other forms of zero-carbon electricity, electric vehicles, and other renewables can take up the slack when fossil fuels are fully eliminated. 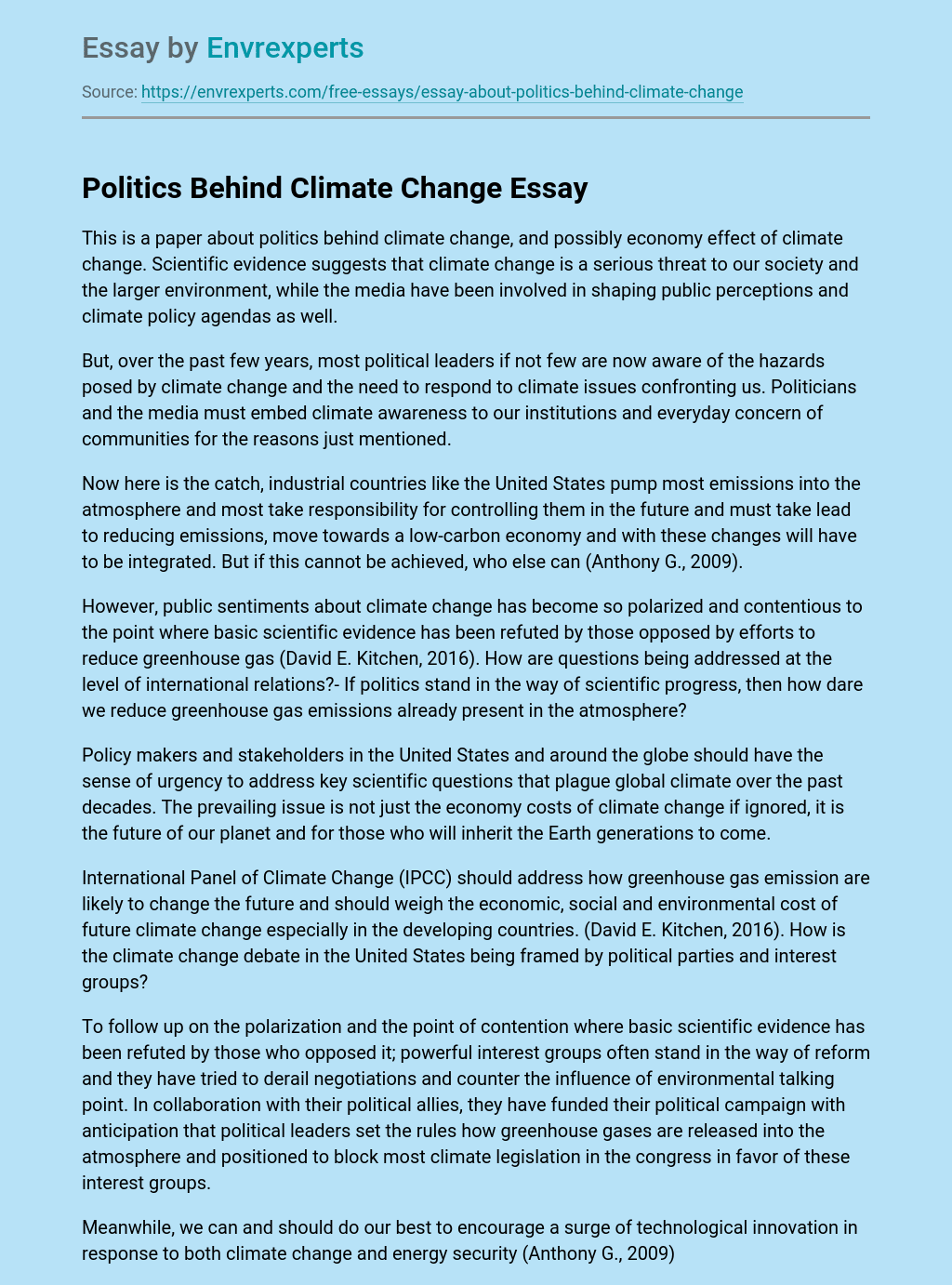