Pollution of Environment by Heavy Metal

The stress on natural resources is increasing day by day due to increasing human population and rapid industrialization thus, their maintenance and conservation remains the ultimate challenge for the mankind. Environmental pollution (i.e. land, water and air) tends to be a devastating issue being faced by human life over the last few decades. However, aquatic contamination is trickier to be measured than terrestrial and air contamination (Barton 2003). The heavy metal contamination of the aquatic water bodies has become a universal problem during recent years, because of their indestructible nature and toxic effects on organisms (MacFarlane and Burchett, 2000).

Don’t waste time
Get a verified writer to help you with Pollution of Environment by Heavy Metal
Hire writer
$35.80 for a 2-page paper

Heavy metals contamination is of prime concern among the various environmental pollutants, due to their potential lethal effect and ability to bioaccumulate in aquatic environments (Censi et al 2006).
The quality of groundwater, being the foremost factor in influencing its suitability for drinking, domestic, irrigation and industrial purposes, is equally significant as its quantity. The concentration of chemical components determining the quality of groundwater is critically inﬂuenced by geological formations and anthropogenic activities.

Punjab, the north-western state of India faces a serious problem of contamination of groundwater especially the southwestern region of the state which includes the districts i.e. Bathinda, Barnala, Faridkot, Ferozepur, Mansa, Moga, Muktsar and Sangrur due to geogenic and anthropogenic activities. According to report by Government of India Planning Commission in 2013, the southwestern zone of Punjab has high contents of fluorides, nitrites and heavy metals like uranium (U), arsenic (As), lead (Pb), nickel (Ni), zinc (Zn) and chromium (Cr) far above the safe limits.

Labeo rohita (rohu), belonging to the Cyprinidae family, is the most important fish among three major Indian carps. It inhabits freshwaters of South and South-East Asia. It is widely consumed fish in Asia due to its high meat quality and it is also suitable for evaluation of the level of water contamination (Ramani et al 2002). India is the second largest producer of L. rohita after Bangladesh due to its high growth potential and high consumer preferences. The antioxidant potential of fish during different seasons depend on the physico-chemical properties and presence of contaminants in water therefore affecting the physiology of fish which may cause alterations in protein quality. Thus, proposed studies have been planned for the assessment of oxidative stress in muscles, gills, liver and kidneys of L. rohita inhabiting aquatic water bodies in Shri Muktsar Sahib district of Punjab during different seasons. For the detailed study following objectives were explored:

Pollution of Environment by Heavy Metal. (2021, Oct 31). Retrieved from http://envrexperts.com/free-essays/essay-about-pollution-environment-heavy-metal 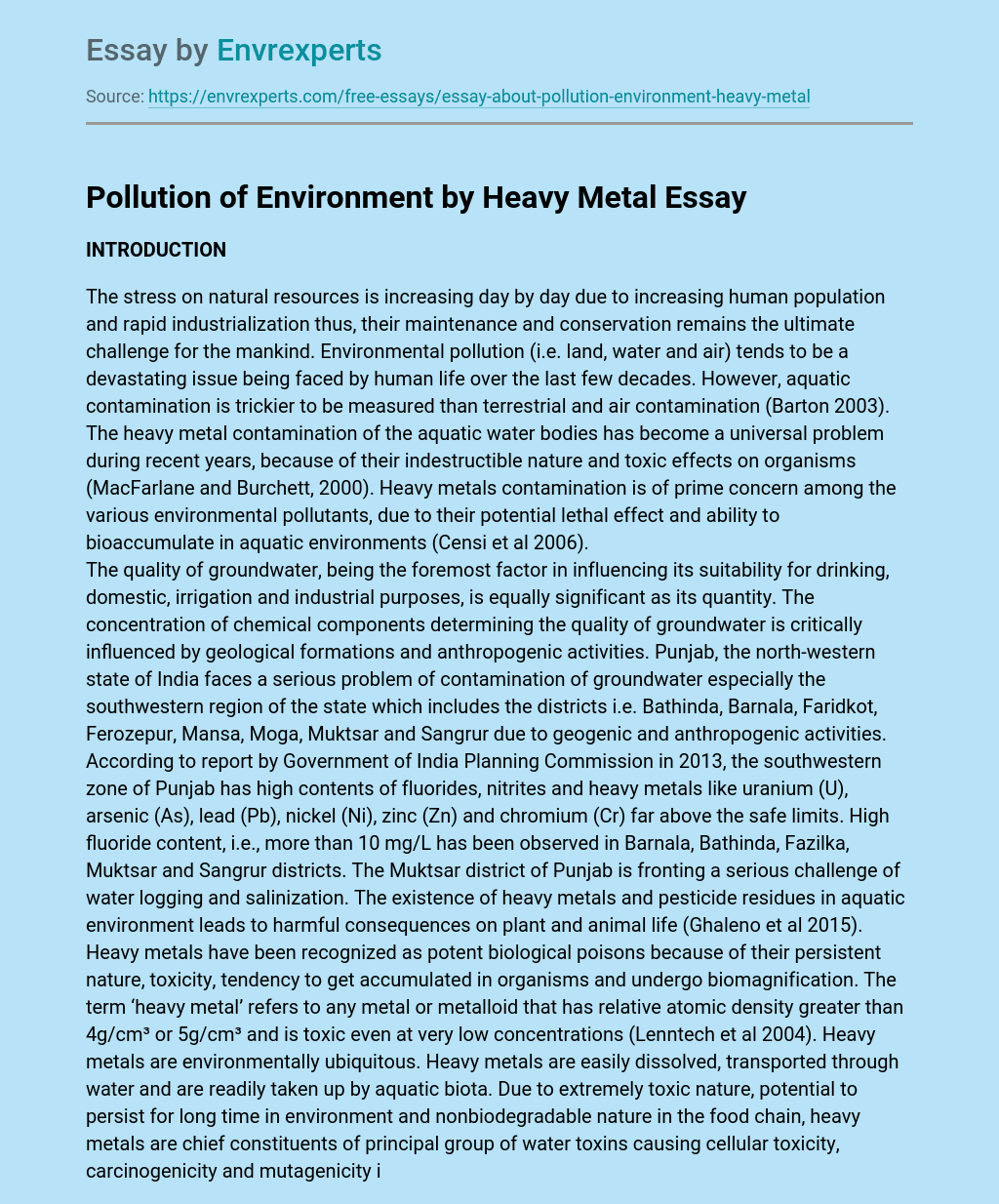