The Positive and Negative Effects of the Exploitation of Utah Sand

Growing up in Utah, nothing influenced me more than my family, the Church of Jesus Christ of Latter Day Saints (LDS), and the awe-inspiring landscapes that make up my home state. Most of the time, these influences seemed to take place simultaneously. I have some wonderful memories of that time: father/son outings in the Wasatch Mountains, scout camps in the Uinta Mountains, or a family camping trip with friends from the local ward at Flaming Gorge NRA. I was brought up to understand that Brigham Young settled the pioneers in Utah because the land itself was sacred.

Don’t waste time
Get a verified writer to help you with The Positive and Negative Effects of the Exploitation of Utah Sand
Hire writer
$35.80 for a 2-page paper

This spiritual land is now riddled with drought, polluted air, and over development. I worry about my family and friends as I watch these conditions negatively impact their lives. As Utah struggles to deal with the adverse consequences of living in a dry and polluted environment, it is threatened by the prospect of something that would only exacerbate the situation: tar sands mining.

Tar sands mining endangers Utah's already dwindling water supply and will only add more pollutants to the air. For the sake of the already stressed environment, tar sands mining should not be allowed within the state. Since the LDS church has such a significant social impact on the state of Utah, it should do everything in its power to influence its members to help ban the practice of tar sands mining.

The process of tar sands mining is one of the most destructive, pollutive and resource intensive forms of oil extraction and it endangers each region's landscape, wildlife, air quality, water resources, and the health of the local communities.

The Oil Shale and Tar Sands Programmatic EIS website (OSTSEIS) shows that most of the tar sands located within the United States are found in eastern Utah. Places like the San Rafael Swell, the Green River, the Colorado River, Glen Canyon National Recreation Area, Canyonlands National Park, Capitol Reef National Park, and Grand Staircase-Escalante National Monument are all places that contain tar sands. These are some of the most beautiful and fragile landscapes in the country. The cultural significance of these areas is immeasurable to the people of Utah. Each is a symbol to the unimaginable beauty of the state. For these reasons, there is no other state in the nation that is threatened by the practice of tar sands mining to the extent that Utah is.

The most apparent negative effect of tar sands extraction is the displacement of the land. According to the OSTSEIS website it takes approximately 2 tons of oil sand to produce one barrel of oil. The disproportionality of this process is a testament of how inefficient this form of oil extraction is. In the Bureau of Land Management's (BLM) Final Oil Shale/Tar Sands Programmatic Environmental Impact Statement (PEIS) they found that no matter which method of tar sands mining is used, that ground surface disturbance would occur (5-17, 5-26). Some of the methods given that would displace the land included drilling, grading, mining, contouring, and blasting. These types of practices would gut the very essence of this land, leaving it scarred and vulnerable to increased soil erosion. If we want to continue to experience the spiritual depths of these lands, the citizens of Utah need to come together to protect the land from such practices.

The exploitation of Utah's tar sands would also have a dramatic effect on the quality of the air and release an overabundant amount of greenhouse gases into the atmosphere during a period of climate change. According to the Sierra Club, tar sands oil emits 3 times more carbon than conventional oil. Mormons and non Mormons both yearn to clean up the pollution problem in Utah, but tar sands mining would only create more pollution. The BLM's PEIS finds that many of the regional effects on the air from tar sands mining and processing would be long-term (5-42). It states that beyond the amount of carbon that would be put into the atmosphere, it would also release hazardous air pollutants, volatile organic compounds, and a significant amount of mono-nitrogen oxides and sulfur dioxides that could lead to atmospheric deposition (5-42). These pollutants would have adverse health effects on the workers, the local community and the wilderness areas adjacent to the mining projects. Banning the extraction of tar sands would create a healthier life for Utahans and begin the process of dealing with its pollution problem.

However, the most important reason Utah should ban tar sands mining is to protect and conserve its water resources. The BLM's PEIS estimates that it would take approximately 530,000 barrels of water per day for a tar sands mining project that produces 20,000 barrels of oil per day (1 barrel = 42 gallons). While each project might vary in production, the enormous amount of water they consume during production is something that the desert land of Utah cannot afford. Utah is the second driest state in the nation and receives less than 14 inches of annual rainfall. The United States Global Change Research Program states that the southwest region of the United States has experienced some of the greatest rises in temperature in the country and that it is likely for the warming to continue. They also state that the temperature rise has had, and will continue to have, a dramatic impact on the flow of water through the Colorado River. It should also be noted that the BLM's PEIS found that tar sands development could have a dramatic impact on the water quality of the Colorado River Basin (5-25). They describe several ways in which the water could be polluted. There is potential for contamination runoff from project sites, degradation in groundwater quality, and a decreased flow to agricultural wells. It is also likely that there would be a contamination of salts, metals, and hydrocarbons in the surrounding groundwater and surface water. These types of effects endanger the local fish and wildlife, as well as the 30-40 million plus people who get their water from the Colorado River Basin. A ban on tar sands mining would protect and conserve the water resources of the dry state of Utah.

While supporters of tar sands mining claim that it would boost the Utah economy, in reality it would only benefit the very few and disrupt the standard of living in the local communities. While the OSTSEIS website estimates that up to 19 billion barrels of tar sands oil could be recovered in Utah, most of those profits would go to large corporations like the Canadian based company U.S. Oil Sands. Allowing Utah's resources to be controlled and sold by a foreign oil company contradicts the notion of energy independence. Once the tar sands have been mined, it would leave the small towns in a depressed and polluted environment. The BLM's PEIS indicates that the workers and local community would be more susceptible to cancer caused by the inhalation of volatile products and by having an increased exposure to contaminated drinking water (5-139). It would serve the well-being of these communities to implement a more permanent and sustainable economy than the boom and bust economy that oil production causes.

Tar sands mining would also hinder the abundant recreational economy in many of the southeastern regions of Utah. These areas are considered to be some of the most revered recreational outlets in the world. According to the city of Moab, it gets over one million visitors a year due to the easy recreational access to places like the Colorado River and Canyonlands National Park. The National Park Service's Annual Recreation Visits Report estimates that Capitol Reef alone has over 600,000 visitors a year. The PEIS from the BLM states that, “Commercial tar sands development is incompatible with recreational use." (5-15). While many people visit the National Parks, many also visit the surrounding areas because of the great wilderness that is still held there. If we allow mining outside the borders of some the countries greatest landscapes, we will endanger their great ecosystems and endanger the thriving recreational economy in the nearby small towns that depend on them for revenue.

Finally, if the LDS church were to openly opposed tar sands mining it would reinforce and remind its members of the values that the church teaches. It was the LDS church that taught me that humans must be the stewards of the Earth and that the Earth itself was a spiritual being. Like the practices in the Words of Wisdom, protecting our environment is essential to the health of the people. The church has always been a beacon of responsibility in Utah. The amount of social services provided by the church is hardly surpassed anywhere in the world. It is understandable why the church tries not to involve itself in political matters, but protecting the environment is essential to the well-being of the human race. As the BYU professor George B. Handley put it in his article The Environmental Ethics of Mormon Belief, “Religion needs environmentalism as much an environmentalism needs religion… Perhaps the greatest power of Mormonism is also its greatest hope for making a lasting contribution to the environmental crisis…As God's children we bear a heavy moral responsibility to act as stewards of all gods physical creations and to treat them with respect and sustaining love.” (206). If the church were to oppose the tar sands it would act as a testament to its respect and love for all living things.

While it is necessary to gain energy independence and to stimulate the local economy, there are many solutions that are more sustainable and more responsible than tar sands mining. In the past year alone there has been technologies released that will eventually surpass the efficiency of oil production. Things like the liquid metal battery that was developed by the MIT Professor Donald Sadoway. The battery is able to store a large amount of energy and release it upon demand. Its storage capability will revolutionize the way the infrastructure of our energy system is constructed. It will allow renewable technologies like solar and wind to store large amounts of energy to be used, as we need it. As technology continues to make solar, wind and other renewable sources more efficient, the liquid-metal battery will soon replace the large demand of oil. If the LDS church supported or invested in ideas like this, the church could be seen as a leader in the progress toward a sustainable future.

The benefits of tar sands mining are only temporary, while most of its negative consequences on the land are permanent. It takes the beauty of the sacred landscape and leaves nothing but dust and pools of toxic waste. The Utahans who would work and live near these mines would be poisoned by the air they breathe and the water they drink. It would be vicious to the land and cruel to the people to let such practices loose on the state. It is time to choose to protect our land and reject harvesting it for dirty oil. Our civilization's history, culture, and well-being depend on it. If it is not protected, would we still be able to stand on top of places like the Colorado Plateau and see its expansive canyon system twist and turn itself down into the oblivion of the horizon without seeing the destructive footprint of man? And if not, would we still know that we are part of something bigger?

The Positive and Negative Effects of the Exploitation of Utah Sand. (2021, Oct 31). Retrieved from http://envrexperts.com/free-essays/essay-about-positive-and-negative-effects-exploitation-utah-sand 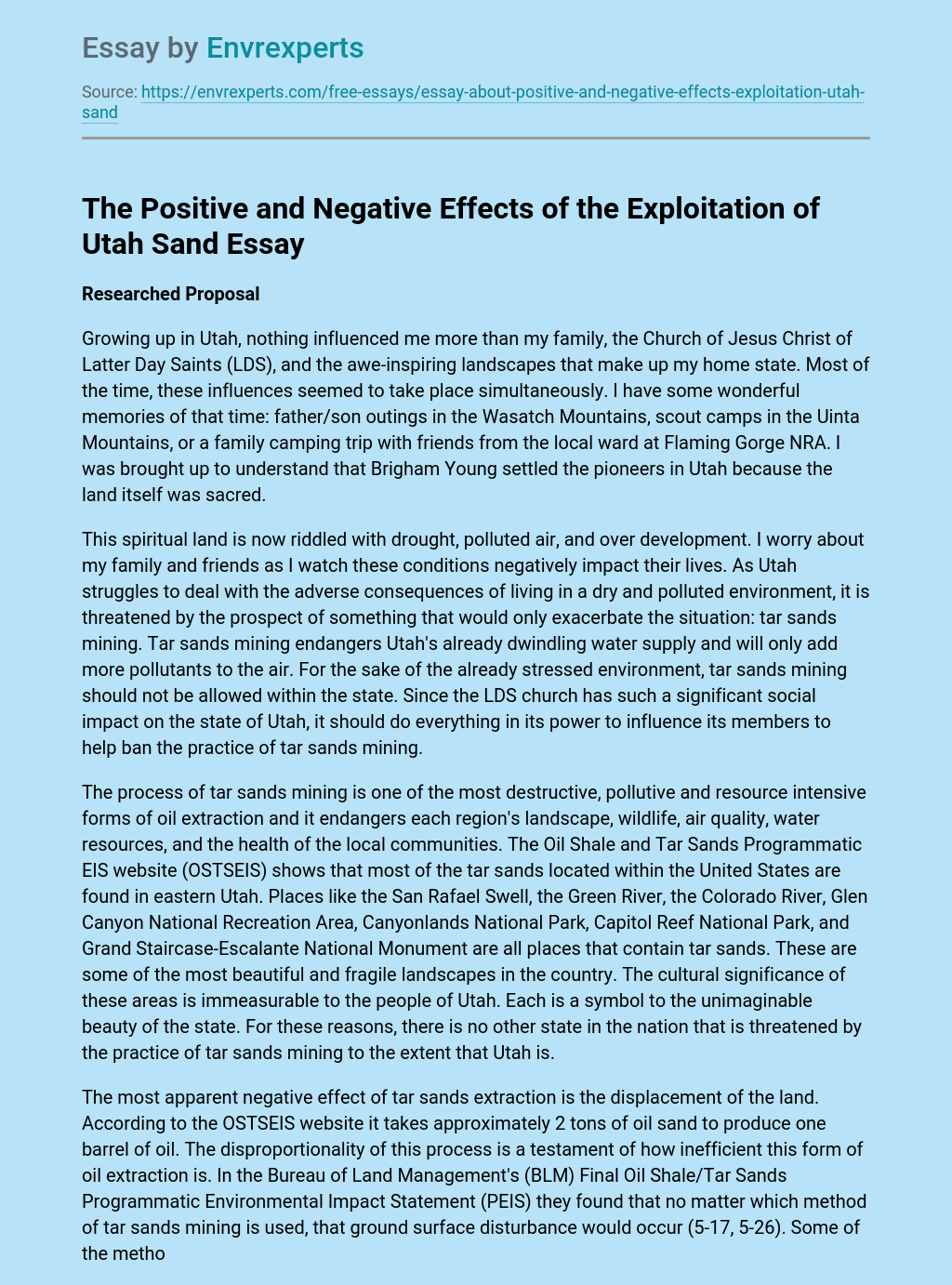