Preservation of Wildlife Habitats on Private Property within the United States

Delwin E. Benson defines the term "wildlife" as "free-ranging vertebrate animals that are not closely confined by fences or domesticated by humans." Because by definition this “wildlife” is not bound to any particular areas, and habitats can vary from desert areas to wetlands, management of wildlife habitats can be difficult and many government agencies share the responsibility for their upkeep and preservation. Agencies tasked with protecting these habitats include; the Bureau of Land Management, the United States Forest Service, the Fish and Wildlife Service, the National Park Service, and the Bureau of Reclamation.

Don’t waste time
Get a verified writer to help you with Preservation of Wildlife Habitats on Private Property within the United States
Hire writer
$35.80 for a 2-page paper

These government agencies uphold legislations passed by the Federal Government that are aimed to help protect wildlife habitats on federal land, among other things. Examples of such legislations include; the National Environmental Policy Act (NEPA), the National Parks Organic Act, the National Forest Management Act (NFMA), the Wilderness Act of 1964, and the Endangered Species Act.i

Unfortunately, because in the United States, 80% of wildlife habitats are on privately owned property, iv the effects of these acts are somewhat limited.

The Endangered Species Act does prohibit private landowners from making any alterations to a listed species' habitat that would cause harm to said species, and the authority of other aforementioned can, in some situations extend to private properties adjacent to federally protected sites; However, the latter is rarely the case. vi And the result of this lack of authority over private properties can be disastrous for wildlife species and wildlife habitat. A few primary concerns involving the presence of wildlife on owned property are evident among private landowners.

First, landowners display a fear that the wildlife will cause an economic loss for the owner. Property can be damaged, crops can be eaten, etc. Second, is the concern that the wildlife species will attract unwanted attention to their property from hunters, naturalists, and the like, who want to make use of the animals in some way. The last concern of landowners is one of safety. In some cases, wildlife in question is potentially dangerous predators like bears, and bobcats. When faced with these concerns it is natural for some landowners to seek to destroy the wildlife habitat, thus ridding their property of the unwanted animals.vii Private wildlife habitats may also be eliminated due to a change in the property's intended land use. There are incentives for some landowners to maintain wildlife habitats on there properties. Under the Farm Bill, the Wildlife Habitat Incentive Program provides technical and financial assistance (up to 75% of the cost) to establish/improve fish and wildlife habitats on agricultural land, nonindustrial private forestland, on Indian land.ix Similarly, Swampbuster provides benefits to farmers who do not put wetlands into production.' Regrettably however, state-run private lands development programs typically suffer from “inadequate funding,” so wildlife management on private land is often neglected.*i Because so much of America's wildlife habitat lies on private property, we must find a way to increase the amount of habitat preserved, and to ensure that it is properly managed.

In his article entitled Creating Wildlife Habitat through Federal Farm Programs: An Objective-Driven Approach, L. Wes Burger claims that the poor management of private property wildlife habitats is due in part to the current Farm Bill conservation programs. He asserts that the intentions of the current Farm Bill are too “program-driven.” That is, farmers applying to a specific Farm Bill conservation program adopt management practices based around the requirements of the program, whether or not these requirements allow them to achieve their intended objectives. xii Burger claims that as a result of the currently used, program-driven practices may have limited the wildlife habitat value, and possibly sped up the decline of native species in the area. Xili To solve this problem, Burger proposes a change in the nature of the Farm Bill. Conservation programs in the new Farm Bill, as suggested by Burger, would be "objective-driven." Thereby helping to achieve landowner objectives, and improving the quality of wildlife habitats.

This is a small-scale solution to the problem, as it would only apply to private properties adjacent to land managed by the National Park Service. In accordance with the 1978 amendments to the Organic Act, the Secretary of the Interior has a legal duty to protect national parks from any "threatening activities” on neighboring properties. Theoretically then, because wildlife within a national park are not confined within the boundaries marked by property lines, it can be said that the habitat on neighboring properties is the same as that in the park. And therefore, if the private landowner is doing anything that can be said to be "harmful,” then under the authority of the Organic Act, the Secretary of the Interior can impose strict limitations on what that andowner can and cannot do.

In his writings on the failings of the Endangered Species Act, author Daniel J. Rohlf proproses as one of his solutions, that "scientists should develop a degree of legal sophistication."Xi I thoroughly agree that anyone trying to uphold the tenants of the ESA should familiarize themselves with the politics that influence wildlife management, but I think that this solution can apply to any land use management problem. Therefore I propose that before any action can be taken (to improve or degrade a wildlife habitat) landowners and government officials must demonstrate their knowledge of current relevant legal issues, by means of an exam or equivalent. Of course this would also require a legislation to be passed that would both unequivocally define the what constitutes a "wildlife habitat," and would prevent any actions affecting this habitat without someone first demonstrating their understanding of legal issues. Any stakeholder committed to a land use issue in this case, preservation of privately owned wildlife habitats), will be much better off if they examine the political controversy around the issue, and use their newfound knowledge to further advance their case.

Suggested in 1930 by Aldo Leopold, Committed Stakeholders could buy out private landowners and preserve the wildlife habitat on the property. xvii When dealing with cheap lands, this is a feasible solution. However, due to rising prices of land and political attitudes that call for more private ownership rights and less government control, this option becomes less than ideal. xviii

Using eminent domain, cities could take properties containing wildlife habitats from private landowners and construct something that would enhance public welfare without degrading the wildlife habitat. A public park might be a good example of one such construction.

A second answer proposed by Aldo Leopold 83 years ago, was to compensate landowners, either directly or indirectly, for their production of, and one's privilege to use their wildlife "crop."xix This does not necessarily mean that the government is providing payment to the property owners, but rather the consumers who make use of the wildlife habitat on the owner's property are the ones who pay. Private landowners can provide any number of services to the public under this method. Examples range from the establishment of a Bed & Breakfast-style resort adjacent to the wildlife habitat, to the distribution of hunting permits for use on their property.** This economic gain ensures that the landowner will continue to preserve the wildlife habitat and wildlife species on their property.

Creating a partnership between government agencies and private landowners, and the formation of "wildlife and recreation districts" similar to those in Australia and parts of Europe.xxi This would create a system of “co-managers," where everyone (from both the public and private sectors) shares in the costs and the benefits of all management decisions made for the district.xxii

Allocating more funds to be used by stakeholders whose job it is to preserve private wildlife habitats. This can be done at either the Federal Government, or the State Government level, and could potentially help to mitigate the problem of the underfunded state-run private lands development programs.

In accordance with the Gilbert White Model, Solution #1 is the best choice, while Solutions #4 and #8 tied for second place. Solution #1, reforming the current Farm Bill to be less program-driven and more objective-driven, appears to be the best choice because it would be acceptable to all 3 perception examples (the Secretary of the Interior, the affected private landowner, and the general public). The extended period of preservation would appeal to the Secretary of the Interior, and because the landowner has to apply for the program (it is not mandatory), one can assume that they would be in favor of the policy as well. The general public would be aware of the incentives that the Farm Bill provide to farmers within agricultural zoning, and it has the added benefit of preserving a natural habitat. So, I believe that most likely the general public would approve of the introduction of this change as well. The updated Farm Bill would not require any new, unusual technologies and would not disturb any natural processes either. In fact, adopting this policy would preserve the ecological integrity of the habitat and prevent the disruption of native species in the selected area. Xxiv Because the already present habitat would be preserved, the new policy would not cause any negative externalities. The Farm Policy has evolved throughout the years, XXV so updating it once again is most definitely within the limits of the law. And as mentioned above in the perception section, I believe that this update would be socially acceptable. The only aspect that I am unsure of regarding this solution is the economic situation required for this endeavor. Depending on the area, native grass species may be more expensive than the foreign species used for cover grasses under the current Farm Bill. In addition to this, the implementation of this program would require that the National Resources Conservation Service train enough biologists to cover the 3,140 counties within the U.S..xxvi The process of training an adequate number of number of biologists might require large sums of money and therefore, when applying the Gilbert White Model, the economics of the solution will come into question.

Preservation of Wildlife Habitats on Private Property within the United States. (2021, Oct 31). Retrieved from http://envrexperts.com/free-essays/essay-about-preservation-wildlife-habitats-private-property-within-united-states 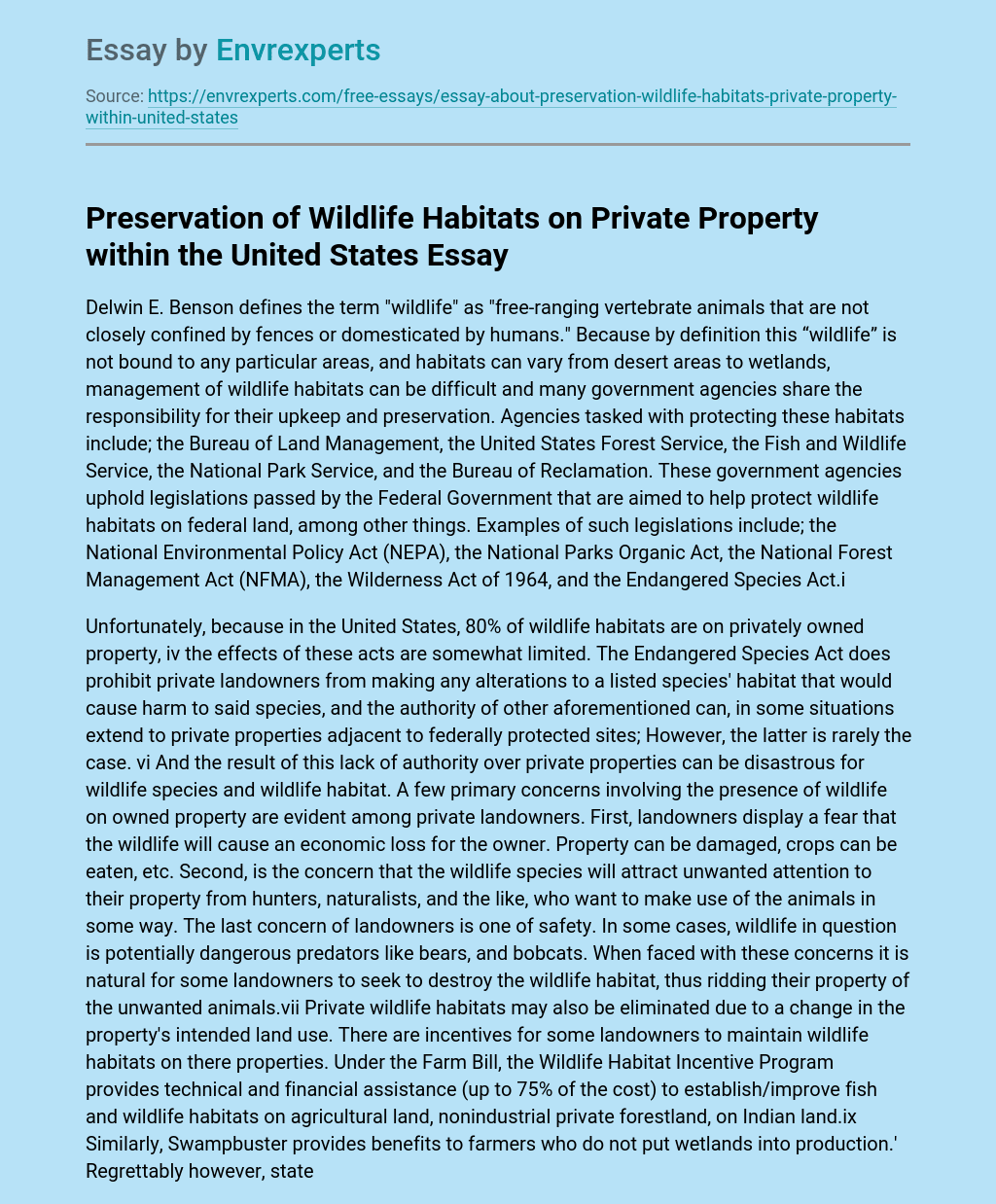