A Preservationist Viewpoint in A Sand Country Almanac, a Book by Aldo Leopold

Everyone in life is able to hold their own personal views of the world. The book "A Sand Country Almanac" by Aldo Leopold holds a strong preservationist viewpoint. Leopold advocates the protection of natural areas, historical sites, and endangered species. This view is different from a conservationists'. A conservationist wants the world to be left alone and be the way it used to be years ago. My personal conservation ethic is ambivalent between the two. I believe that the world is like a shrub.

Don’t waste time
Get a verified writer to help you with A Preservationist Viewpoint in A Sand Country Almanac, a Book by Aldo Leopold
Hire writer
$35.80 for a 2-page paper

It will grow just perfectly on its own but to be the best it can be, needs to be managed a little. As I started my freshman year of college, I had a conservationists ethic. I thought in order to sustain the world, it was best untouched. After just a semester, my view has been altered. I now know that in order for the environment to be healthy and supportive of many species, humans need to manage it.

Many of the experiences in class contributed to this new view I have as well as the readings. The trip to Erie Lake was the first eye opener for me. Seeing the algal bloom and understanding the cause behind it made me realize how precious our waters really are. The bloom was caused from too much Phosphorus in the water which most likely came from farm runoff. We also saw this during our trip on the vessel while looking at the effects of invasive species like the Zebra mussel.

During these observations I realized how once the water supply is contaminated that it is quite hard to restore it back to its original state. "The Living Great Lakes" books states that Zebra Mussels feed heavily on Phytoplankton which is the underlying foundation for the food chain of the lake. Without Phytoplankton the algae have nothing to eat and therefore the fish have no food source. This causes the species in the lake to die off. It is important to have these species in order to maintain a healthy ecosystem. The runoff from farms also was apparent on the vessel. We saw that many species that we used to be able to identify in the water were overrun by the invasive species and the abundance of Phytoplankton in the water. Before going on this trip I did not know that farming was such a harmful way of life to the environment. I always thought that farmers were doing more good. This does not mean that all farms are damaging to the environment by using fertilizer, because some farms are organic and actually respect the soil. Now when I look at a farm I look to see if they have special area where they can rotate their crops in the future and also look at the size of the farm. If it is a large farm I automatically think of all the fossil fuels they use to fertilize and harvest their crops. In the book "The Omnivore's Dilemma", author Pollan talks about how farmers do not make much money on their crops. Most big farms that use heavy machinery end up over budget and in debt instead of making a profit. He also explains how corn is overly produced and that there is such a surplus.

The surplus in corn just keeps getting worse because it is the one crop that farmers can afford to grow and also there is such a demand for it. I never realized how much corn is in processed foods. Before reading Michael Pollan's book, I knew that fast food and junk foods were not nutritious but I never realized to what extent this was true. Almost every meal we eat is mainly made up with corn. Corn is present in the breading of chicken all the way to the sweeteners in soda. If what is being eaten is not organically grown or water, there is a large chance that it is made up of corn. After reading this book I now check labels of the foods I eat in order to get a rough estimate of how much corn I am eating each day. To go along with what Pollan's book was stating, we did a food project that had three different groups that had a different set amount of money that was allowed to be spent in a day for food. The lowest was an example of a person on food stamps. The second was someone who ate healthy but it did not necessarily have to be organically grown. And the third group had the same allotted amount to be spent as the second but was only allowed to eat locally grown and organic foods. The results to what foods each group was able to buy were personally shocking. The food stamp group consumed the most calories and had the least nutritious diet. The third group though consumed far less calories and had an extremely healthy diet. After this activity I have made a conscious effort to support the local economy and buy local foods that are nutritious.

The most detrimental topic to my old conservation ethic was the tree and deer sections. Before diving deeply into these two categories I personally believed that it was best to just leave trees be and was against harvesting them in any way. Same was with my view on deer and hunting. I was fully against hunting. I am an animal lover and thought that hunting was cruel and unnecessary. That was until this semester. Starting the unit off reading the book "The agony of An American Wilderness" by MacDonald, I got to see the side of a forester. Many lumber companies just go into places and diameter limit cut. So they cut any tree that is or over a certain diameter. This is detrimental to the health of the forest because it enables the weak and feeble trees that were not as large to flourish and in return reproduce. So the future forest is not as healthy as the current one. After reading this book I realized that in order to have a healthy forest some trees need to be removed. The main trees that are removed are ones that are susceptible to parasites and will not have a long lifespan. The Ash tree for instance has no benefactor to the health of the forest and has a very short life span so many foresters are removing them. Foresters also look for struggling as well as crooked trees. If a tree is not straight that means that sometime in its life it struggled. Also by eliminating these trees, it opens up the canopy and allows seedlings exposure to sunlight which in return enables their growth. This produces the understory and potential new forest. After being informed of what good foresters do for a forest, I have became more lenient on my stringency against cutting down trees. I now know that in order for a forest to be healthy, it is important to get the blemishes out.

Just like trees, my view on deer has changed. I am from a family of hunters and have grown up hearing about the minute population of deer that there now is. After reading the book "Deer Wars" by Bob Frye, I am convinced otherwise. The book has opened up my eyes to the abundance of deer that there is in Pennsylvania and why hunters are wanting more deer. Hunters in Pennsylvania are not educated enough to know the habits of deer and where they reside. Most think that deer can be found in any wooded area, but this is not true. In this book I learned that deer are browsers and tend to eat the entire understory of the forest where they reside. This disables the forest from generating new trees since the deer are not allowing the saplings to grow beyond a certain size before destroying them. Deer are very harmful to the health of the forest. This is what hunters do not know. After knowing this I no longer am against hunting. I am for it as long as it's done in an ethical way.

My conservation ethic throughout the semester has gone from conservationist to ambivalent between my old view and a preservationists view. I now am aware of the dangers that farming brings to the environment and how deer can affect the future of a forest. It may seem like letting the world go on its own is the right way, but it is not. The world needs some interlacement with humans in order to reach its full potential.

A Preservationist Viewpoint in A Sand Country Almanac, a Book by Aldo Leopold. (2021, Oct 31). Retrieved from http://envrexperts.com/free-essays/essay-about-preservationist-viewpoint-sand-country-almanac-book-aldo-leopold 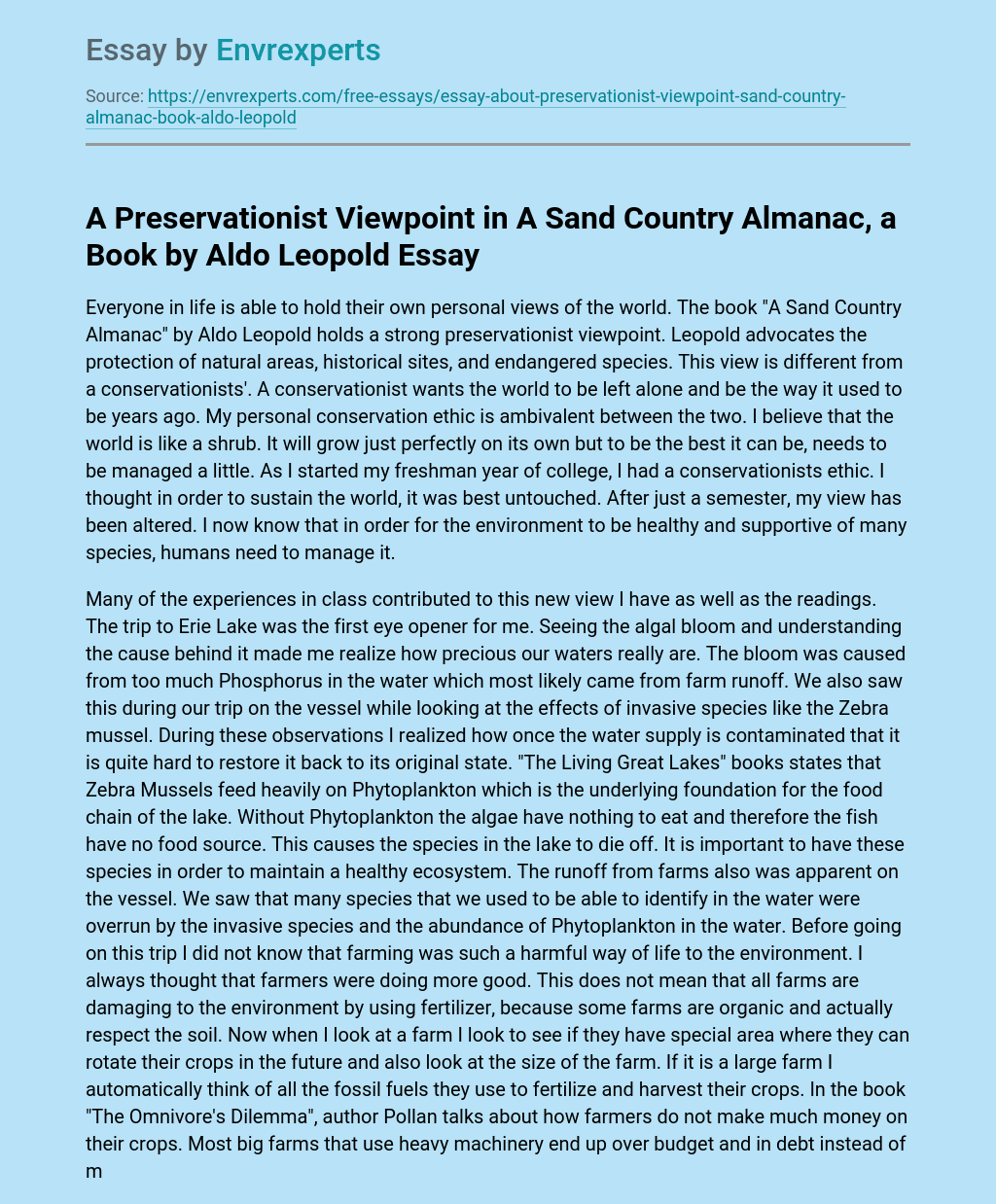