A Problem of the Destruction of Coral Reefs

Not only do corals look like they should be called “ocean plants” but they have almost the same role except they are not plants. They are animals. Coral reefs play a large role in the sensitive ecosystem shared by both corals and fish. Recently coral reefs have been reduced in size and ultimately eliminated in parts of the world. A new project funded by Resorts World SuperFast has caused damage to the ecosystem on the island of Bimini along the Bahamas by destroying the coral reefs in order to make a large pier for the 1,000 passenger ship.

Don’t waste time
Get a verified writer to help you with A Problem of the Destruction of Coral Reefs
Hire writer
$35.80 for a 2-page paper

Coral reefs play an important role in the ocean's ecosystem by acting as a safe and habitable environment for several fish. The nooks and crannies of a tightly spaced coral reef provides safety to smaller fish from larger predators. Corals share a symbiotic relationship with the fish living there acting as a "home". The corals provide protection while the fish keep the area clean and lively.

Because of the safety provided, fish choose coral reefs as the ideal spot to reproduce. Apart from their general importance, coral reefs play an especially important part in the Bahamas. Tourists from all around the world choose the Bahamas as the their getaway destination to go on a tropical vacation. Tourists often go on a snorkel or scuba dive to look into the other world inside the ocean in hopes of finding a well-maintained coral reef full of life and color. The high interest in the tropical life brings in tourists and therefore, economic benefits for the local people of the Bahamas.

Tourists “pump a reported $80 million a year into the local economy"(The Telegraph). The beauty of the clear ocean and tropical fish along the island attracts visitors worldwide.

Resorts World Bimini Superfast is the new cruise that allows passengers to ride from Miami, Florida to Bimini, the nearest island of the Bahamas. The ship has the capacity of holding 2,500 passengers per ride and can bring up to 150,000 passengers per year; although the small island is only inhabited by 2,008 people. The island does not have the capacity to properly dispose of human waste, provide food, or have enough space for an extra 2,500 people on a weekly basis (The Telegraph). Building the pier consists of dredging 1,000 feet deep causing turbulence and destruction to the reefs located there. Not only are coral reefs being destroyed but the trees that make up a mangrove are being uprooted. Because mangroves hold deep roots in the ground, the mud and silt caused by the dredging can further damage nearby reefs. Silt can smother the coral causing blockage from sunlight that is needed to survive (WWF). I was able to see the effects and consequences of the destruction. Fortunately, in 2014 I had the opportunity to go to Bimini for marine biology education. The water was clear yet blue and almost transparent. Corals on the west coast of Bimini had bright colors and were swarming with fish; however, I visited the area where the pier was being built. The water was gray as a layer of dark brown mud seemed to cover the area of the pier. Corals were gray, damaged, and broken. Fish were no longer living in their habitat. Having a first hand view of the damage, I unfortunately saw what was being done by Resorts World.

Resorts World Bimini Superfast has made claims that they are containing the damage caused by their deconstruction of the coral reefs and preventing further damage. Genting Group, representatives of the project who own the ferry, hired three environmental consulting companies who have stated that “Sediments screens will be used during the dredging to protect the island's clear waters” (Local 10). Genting Group have claimed that the project will bring many jobs to the local people, including 300, and economic benefits to the people of Bimini and the Bahamas. Though there are benefits to the new project, the Bimini Blue Coalition, a group "made up of local residents, homeowners, community leaders, and stakeholders” has said "this proposal suggests compromising or diminishing… our beaches, our reefs, the clarity of our water, for the sake of an unnecessary convenience to your resort. It takes away from what everyone loves about Bimini”(Facebook). The locals have agreed that though the cruise will bring in more revenue, the island will be at risk. Jean-Michel Cousteau, President of Ocean Futures Society, has suggested that [he] “strongly believe[s] that the negative consequences of this proposed project far outweighs the potential benefits” (Ocean Future Society). With so much destruction, Bimini will lose what makes the island a tourist attraction. Furthermore, Dr. Stump, a marine biologist working on the conservation of marine life with the Shedd Aquarium, has stated "Not only will dredging directly destroy critical habitats, but the silt created from the process will flow out from the dredged site with the currents, smothering Bimini's nearby fragile coral reef communities. Long after the destructive dredging is over effects will continue to be felt every single time the cruise ship comes in and stirs up significant amounts of sediment that will continually smother the reefs”(Save the Bays). Resorts World has provided pictures of the silt being contained by a rope that is used to contain oil spillages (Save the Bays). The problem is that the silt does not float to the top like oil. The silt goes under the rope along with heavy mud and is able to reach other nearby ecosystems such as other corals reefs and mangroves. World Bimini plans to relocate corals in an attempt to mitigate negative consequences. However, they can only remove scleractinian (stony corals) and all others that are not removed will likely die (Ocean Future Society). Stump continued to comment on Resorts World's effort to protect the ocean stating that they have "failed to use mitigation measures such as silt curtains while dredging and filling, sending plumes of dangerous silt into the lagoon, an important nursery ground for sharks, conch and lobster" (Save the Bays). The destruction directly affects corals but the harm done by the methods of clearing the land has spread throughout other ecosystems across the coasts of the island. Long-term, the island cannot sustain and manage the quick change in environment in order to adapt to the changes done by the company.

Fish and other rare animals who are already threatened have the possibility of going extinct if their habitat continues to be destroyed. The Nassau Grouper, only native to the Bahamas, is constantly being threatened along with other fish. As further construction continues, the native fish are forced to move to another coral reef site that does not have the capacity of holding so many fish. Existing coral reefs are essential considering tropical fish living in coral reefs make up 25% of the ocean's marine life (WWF). The wildlife gives people a reason to go and fuel the economy and so benefit the local Bahamians. Without the rare sightseeing and clear blue waters to dive into, Bimini loses its biggest revenue opportunity.

The pier has already been built but further damage can be prevented. Resorts World has not stopped just on the ocean. On land, mangroves have been cut down to make space for the new hotel where passengers from the cruise can stay at. It can be suggested that Resorts World restore the environment that has been destroyed. Money has continued to be a motive while little is being seen put back into the Bahamian economy. Profits gained from the ship can be go towards the people of Bimini, and the restoration of mangroves and coral reefs. Still, the damage to the ecosystem along the Bahamas has already been done.

A Problem of the Destruction of Coral Reefs. (2021, Oct 31). Retrieved from http://envrexperts.com/free-essays/essay-about-problem-destruction-coral-reefs 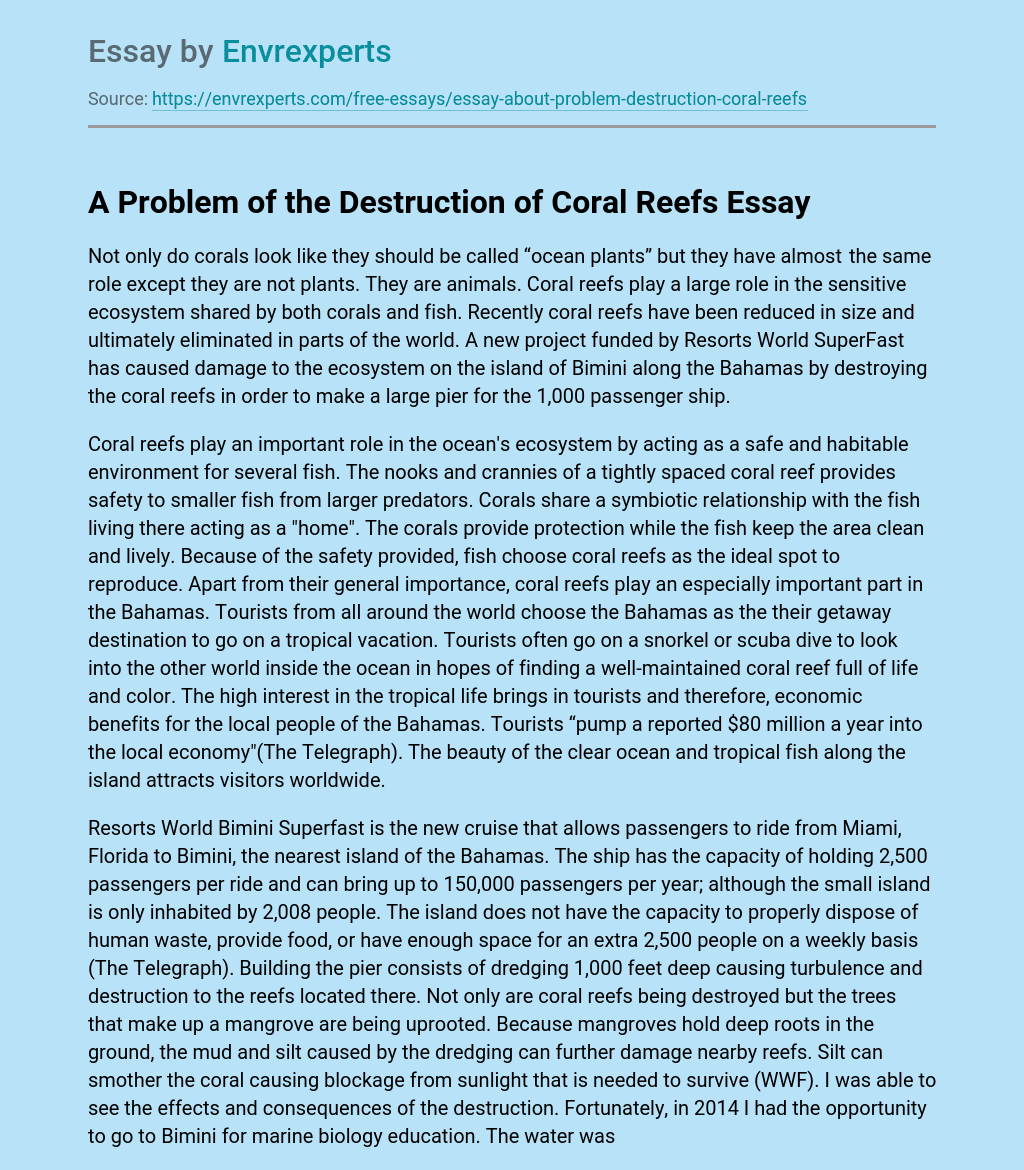