A Problem of Water Ecosystem Issues

Water ecosystem or the aquatic ecosystem comprises of the biotic components of the environment that lives in water bodies their entire life and thus obtain all the nutrients and fulfill their requirements from the water bodies itself. In other words, an ecosystem composed of biotic communities that are structured by biological interactions and abiotic environmental factors is refrred to as aquatic ecosystem. Types: There are two types of water ecosystem: Fresh water ecosystem Marine water ecosystem Marine ecosystem Characteristics of marine ecosystem: Largest of all ecosystems Covers approximately 71% of earth’s surface Contains approximately 97% of earth’s water Generate 32% of world’s net primary production Have presence of dissolved compounds with salt present majorly Average saliniy of 35 parts per thousand of water Organisms found in marine ecosystems include brown algae, dinoflagellates, corals, cephalopods, echinoderms and sharks.

Don’t waste time
Get a verified writer to help you with A Problem of Water Ecosystem Issues
Hire writer
$35.80 for a 2-page paper

Distinguished into zones \nZones of marine ecosystem Marine organisms are unevenly distributed throughout the oceans. The availability of light, water depth, proximity to land, and topographic complexity all affect marine habitats.

Zones of freshwater Ponds and lakes are sometimes referred to as lentil ecosystems, meaning they consist of standing or still waters. Essentially, the waters don’t flow like streams and rivers. Lakes are normally divided into 4 zones of freshwater aquatic communities: Littoral zone: The area adjacent to the shore of the lake where plants thrive Limnetic zone: Open water surfaces off the shore Euphotic zone: Area near the water surface that receives some sunlight to aid photosynthesis Benthic zone: The bottom of the lake. Animals that live in lakes include different fish species, frogs, snails, crayfish, worms, insects, turtles and so on. Plants that thrive in lakes include duckweed, lilies, bulrush, bladderwort, stonewort, cattail and so on. Trophic levels The quantity of biologically useful nutrients like phosphorus, nitrogen, etc., dissolved in the waters of a water body determine the trophic (nutritional) state of the water body. When these limiting nutrients increase, it triggers higher plant growth in the body of water and a subsequent increase in its trophic level. The most widely used trophic indices is the Carlson's index. Here, the trophic state of a body of water is defined as the total weight of biomass contained within it. OligotrophicOligo” means very little; therefore, oligotrophic means very little nutrients (Phosphorus and Nitrogen). Oligotrophic lakes are usually found in northern Minnesota and have deep clear water, rocky and sandy bottoms, and very little algae. The fish found in oligotrophic lakes like cold, high oxygenated water, examples include lake trout and whitefish (more information on fish). In oligotrophic lakes, oxygen is found at high levels throughout the water column. Cold water can hold more dissolved oxygen than warm water, and the deep region of oligotrophic lakes stays very cold. In addition, low algal concentration allows deeper light penetration and less decomposition. When algae, zooplankton and fish die, they sink to the bottom and are decomposed by microbes and invertebrates. This decomposition process uses up oxygen. Since oligotrophic lakes are less fertile and have less algae and other organisms, there is less decomposition and the oxygen doesn’t get used up.\nMesotrophicMeso” means middle or mid; therefore, mesotrophic means a medium amount of nutrients (Phosphorus and Nitrogen).

Mesotrophic lakes are usually found in central Minnesota and have clear water with some algal blooms in late summer. Mesotrophic lakes are great fishing lakes and are home to many sport fish such as walleye, perch, smallmouth bass, muskellunge and northern pike (more information on fish). Mesotrophic lakes behave differently than oligotrophic lakes in that they stratify, meaning they separate into layers in the summer (more on lake stratification). The top layer of water becomes warm from the sun and contains algae. Since the by-product of photosynthesis is oxygen, oxygen concentration remains high at the surface of the lake. The bottom layer remains cooler and can become anoxic in mid-summer. This change occurs because as all the algae and other organisms die and are decomposed at the bottom of the lake, oxygen gets used up. Since this bottom layer of water does not mix with the top layer of water in the summer, oxygen cannot be replenished. The implications of anoxia are that no fish or other organisms can live where there is no oxygen; therefore, in late summer, fish move shallower where there is still oxygen available.\nEutrophic Lakes that are eutrophic in nature have high levels of biological productivity. An abundance of plants is supported by such lakes due to the rich nutrient constitution, especially nitrogen and phosphorus. Initially, eutrophic lakes accelerate multiplication and growth of lake fauna due to the high levels of oxygen provided by a large number of plants growing in the lake. However, when things cross limits and plants or algal blooms overcrowd the lake, the lake fauna suffers due to the high levels of respiration by the living vegetative matter.

Eutrophication might occur naturally or due to human impact on the environment. “Eu” means true; therefore, eutrophic literally means true nutrients or truly nutrient rich (Phosphorus and Nitrogen). Eutrophic lakes are found in southern Minnesota where the soils are more fertile and where there is a lot of farmland. Eutrophic lakes are shallow and have murky water and mucky, soft bottoms. They also have a lot of plants and algae (more information on eutrophication). In less eutrophic lakes, common fish include largemouth bass, northern pike, perch and panfish. As a lake becomes increasingly eutrophic, sport fish dwindle and carp abound (more information on fish) Eutrophic lakes are very fertile from all the nutrients carried into the lake from the surrounding landscape. These nutrients (Phosphorus and Nitrogen) support high densities of algae, fish and other aquatic organisms. Since eutrophic lakes have so much biomass, there is a lot of decomposition occurring at the bottom. This decomposition uses up oxygen, causing the bottom of the lake to become anoxic in the summer. In very shallow lakes, the whole lake can become anoxic, causing a fish kill. Fish, invertebrates and other organisms need oxygen to survive.\nHypereutrophic These lakes suffer from problems arising due to excessive plant and algal growth due to a high supply of growth nutrients. These lakes have little transparency due to the dense overgrowth of algae or aquatic flora. These lakes usually have visibility limited to lower than 3 feet. Hypereutrophic lakes also have more than 100 micrograms/liter of phosphorus and more than 40 micrograms/liter of total chlorophyll. The overgrowth of algae often suffocates the fauna below the water depths and this might create dead zones beneath the water surface. Some lakes may be naturally eutrophic for the past 100 years. Other lakes have gradually increased in nutrients as a result of human activities and have gone from mesotrophic to eutrophic. The divisions of the trophic state index for each trophic state are roughly: 0-30 Oligotrophic, 30-40 Oligotrophic/Mesotrophic, 40-50 Mesotrophic, 50-70 Eutrophic, 70+ Hypereutrophic. (see more information about Trophic State Index) One drawback of defining trophic states as certain divisions in the trophic state index is that each lake is different. The trophic nature of a lake depends on many things including depth, area, watershed size, adjacent land use, and climate.

A lake with a TSI of 49 falls on the borderline between mesotrophic and eutrophic, and there is some overlap. Trophic states should be considered a general definition of lake condition. It is important to remember that lake trophic state is not interchangeable with water quality. Water quality is subjective and depends on how you intend to use the water body. A lake that is good for duck hunting is not necessarily good for water skiing. In turn, a lake that is great for swimming may not be great for bass fishing.

A Problem of Water Ecosystem Issues. (2021, Oct 31). Retrieved from http://envrexperts.com/free-essays/essay-about-problem-water-ecosystem-issues 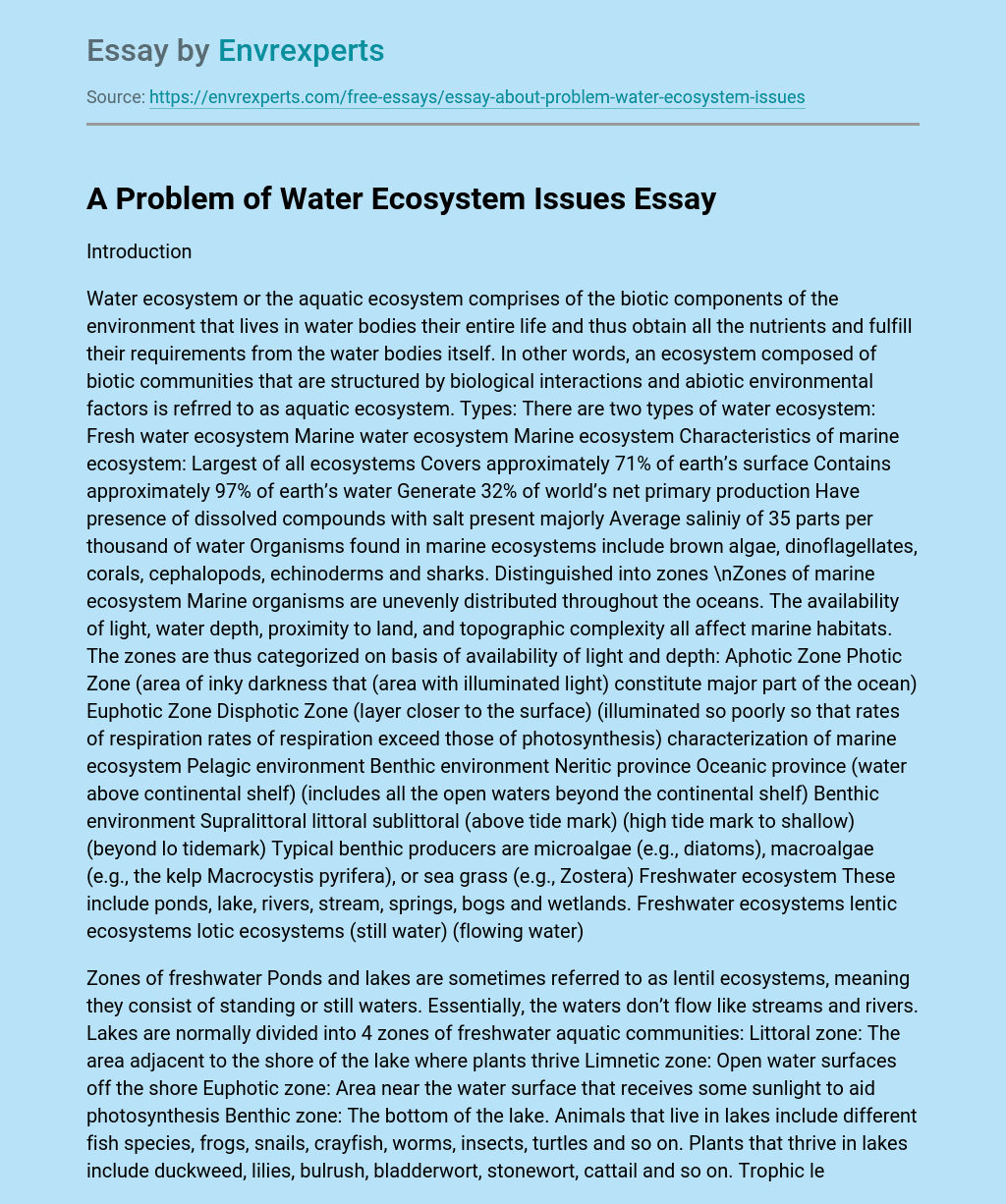