A Problem of Water Pollution in Our World

Pollution is an ever growing problem around the world that can come in many different forms. One form of pollution is water pollution which is the pollution of bodies of water such as rivers, seas, the ocean or lakes. This can occur when pollutants such as insecticides and herbicides, chemical waste, metal waste and plastic waste leave homes, factories and buildings and end up in these bodies of water. When taking a look at the big picture of pollution there is so much to dig through we could write hundreds of books about the devastation and everlasting effects that are caused.

Don’t waste time
Get a verified writer to help you with A Problem of Water Pollution in Our World
Hire writer
$35.80 for a 2-page paper

When narrowing water pollution down a big game player in this problem is Plastic pollution. Plastic is a material used in everyday items such as cups, grocery bags, toothbrushes, hairbrushes and so many more. Taking a look into the history of plastic you will find that for over 30+ years there have been efforts made in tackling water pollution. Policies have been put into place to help regulate the discharge of pollutants into the country's body of waters.

Although this is something that affects everyone currently water pollution does not get the spotlight it needs in order to further understand the situation. Currently there are start up groups aimed at combating the plastic pollution issue we have here with efforts aimed at becoming a plastic free nation. From a survey of public opinion it seems like alot of people are aware there is an over consumption of plastic products but they don't understand the collateral damage that is dealt by using them.

The damage to marine life and ecosystems is stepping its way into the light and people are starting to realize the damaging effects. As time goes on and our world is becoming more and more social, more stem is being built up behind the harmful effect that these plastic pollutants can cause. Policies will continue to evolve as the research on the subject grows and more awareness will continue to be demanded. \nEnsuring that our nation's waterways are clean has been a topic of discussion since 1972 when the Clean Water Act was passed. Originally known as the Federal Water Pollution Control Act this is a U.S. Federal law which prohibits the discharge of pollutants into bodies of water.

The Clean Water Act does not define pollutants very specifically but includes any type of agricultural, municipal, or industrial waste. The clean water act breaks these pollutants into 3 groups; Conventional, toxic, and nonconventional. Conventional pollutants include those commonly found in domestic, industrial or commercial waste such as total suspended solids, oxygen demand, and oil/grease. Nonconventional pollutants are there for the pollutants that don't fall under either toxic or conventional pollutants. These can include ammonia, nitrogen, chlorine etc.. Toxic pollutants are defined as those materials that can contaminate the environment and cause health problems such as cancers and birth defects. These pollutants include man made compounds and over 126 metals. Another requirement of the Clean Water Act is that it requires states to submit a form to the EPA every 2 years. This form lists out bodies of water where insufficient pollution control are present thus making the water quality below standard. The regulations put in place here still do not protect all its people and there are a few examples of where the Clean Water Act failed its citizens.

One example is brought in the court case San Antonio Bay Estuarine Water Keeper vs Formosa Plastic Corp. The suit was brought upon Formosa for illegally dumping plastic powders and plastic pellets and polyvinyl chloride. This poses danger to the surrounding communities as well as the marine life in Cox Creek, Lavaca Bay, and Matagorda Bay. Birds and fish in the area around the plant eat these pellets and develop health problems or the worst death. When an independent researcher surveyed the area they had gathered hundreds of 50 pound bags of plastic pellets discharged by Formosa. Cases such as these are examples of how companies manipulate the current law for financial gain. Formosa is a company with a track record of discharging pollutants into the waterways but face little to no penalty when the profits are worth more than the punishments. Swinging towards a more current state of reality, events are always shifting our policy and what direction they will go. The BP oil or also known as Deepwater Horizon oil spill woke a lot of people up on the devastating causes of pollutants in our ocean. The spill shed light on the dangers our actions can have and the damage that followed. Marine life as well as species of birds received the most harm from this event, some of the health problems include reproductive failure, and organ damage. Ecosystems still to this day are feeling the devastation caused by the oil spill and clean up efforts are still on go. Much like the BP oil spill shed light on the harmful effects of toxic pollutants today more attention is being raised when it comes to plastic materials. Plastic is something that has become a topic of discussion since the rise on social media and seeing the amount of plastic that is in our oceans. Although it is a topic that is heating up it doesn't seem like the views are all on the same page. On one hand you have people who see the rises in temperatures and correlate them to natural caused cycles that the earth goes through. This argument stems from the idea that plastic pollution isn't a contributor to rising water temperatures and tries to claim that pollution is nothing more than trash that needs to be picked up. Current events are always swinging the pedaleim one way or another.

For example Plastic Industry Association has used the current COVID19 pandemic as a way to push for less tight plastic regulations stating “single use plastics products are the most sanitary choice when it comes to many applications (Politico).” On the other side it is estimated that the U.S. alone produces 300million tons of plastic each year, which 50% of is single use plastics. This plastic ends up in waterways and contaminates the water we drink as well as the fish we eat. Although this is an issue that is picking up attention there still aren't many new laws being put into place to combat the pollution. For example only two U.S. states have banned the use of plastic bags and only a few more local communities have banned other plastic products like Key West banning plastic straws. Over the past few years a number of organizations have risen in effort to stop the misuse of plastic products. One of them is 4Ocean which uses its resources and help from local communities to get out and clean up the plastic/pollution that they find. Another organization is #breakfreefromplastic which is a global movement aimed at a future free of plastic.

They have over 1300 groups who have joined the movement to reduce the use of single use plastics and find a lasting solution. Considering the issue at hand it is important to ask oneself who are the affected party? In this case plastic pollution can cause substantial harm to the marnie life and animals that live near the water ways. These animals suffer the most because we as humans are degrading their environments and exposing them to toxic materials. Birds suffer because they often consume these plastic particles and suffer from problems such as malnourishment, bodily harm, or even sometimes death. Birds ingest these harmful toxins which can cause them to believe they are full when they are not and can lead to a number of growth problems. Fish are also greatly affected by our plastic pollution. For example plastic products or micro plastic particles can change the temperature of the water which can be devastating for fish with temperature dependent mating seasons. Fish can also suffer from ingesting these toxic chemicals which oftentimes result in health and growth problems. These plastic products disrupt the balance of the ecosystem's food web which has a trickling effect on the whole population and is oftentimes hard to research to get a clear understanding of the extent of damage. In order to solve something you must know the cause, which is a hard question to answer when trying to narrow down the key contributors to the pollution problem. It is known that big contributors to plastic pollution is lost fishing gear and large urban coastal populations. Both sides of the argument can agree that more efforts need to be put towards fishing gear since the rope and monfilent are a huge contributor in the entanglement and toxic ingestion of these products. Also as social media allows for the mass broadcast to the population more attention has been raised to the issue of one time use plastics.

This rise in social media has been responsible for bringing attention from the citizens but it's also made some people feel like the media is creating the problem. As we talked about earlier, one side of the argument sees this “issue” as a phony problem that is made by the media. This occurs because on one side you have people arguing that the rising temperatures are caused by the plastic pollution we face today and on the other hand you have people who believe we are going through a naturally occurring cycle that we can not control. These materials have caused an uplift in metal and glass cups as a way to reduce one's plastic use. This is a developing hot topic in today's society as so much is still unknown, but policies continue to adapt to the changing climate and more regulations are beginning to make way to try and combat plastic pollution. Overall water pollution is a rising topic in today's society that as research permits will continue to evolve and change.

The U.S. started back in the 1970s putting regulations in place in an attempt to keep our water quality above a standard. With all of this in play it is still an understudied topic that requires more attention inorder to get a better understanding of the situation. As the topic of rising temperatures continues to gain heat it still seems as though we are uncertain as a nation where we stand. One side wants to think that the issue at hand is a result of naturally occurring processes that are beyond our control. People on the other hand will take the issue at hand and place the responsibility at our laps. They claim that just because you can't see the problem doesn't mean there isn't one. Fish and birds around the world ingest these harmful products and become vulnerable to diseases and potential death. It's hard to decide what is the apportirate approach when dealing with water pollution but like my mother always said “A plan is only as good as its execution,” as it's clear that execution will be everything when dealing with the situation.

A Problem of Water Pollution in Our World. (2021, Oct 31). Retrieved from http://envrexperts.com/free-essays/essay-about-problem-water-pollution-our-world 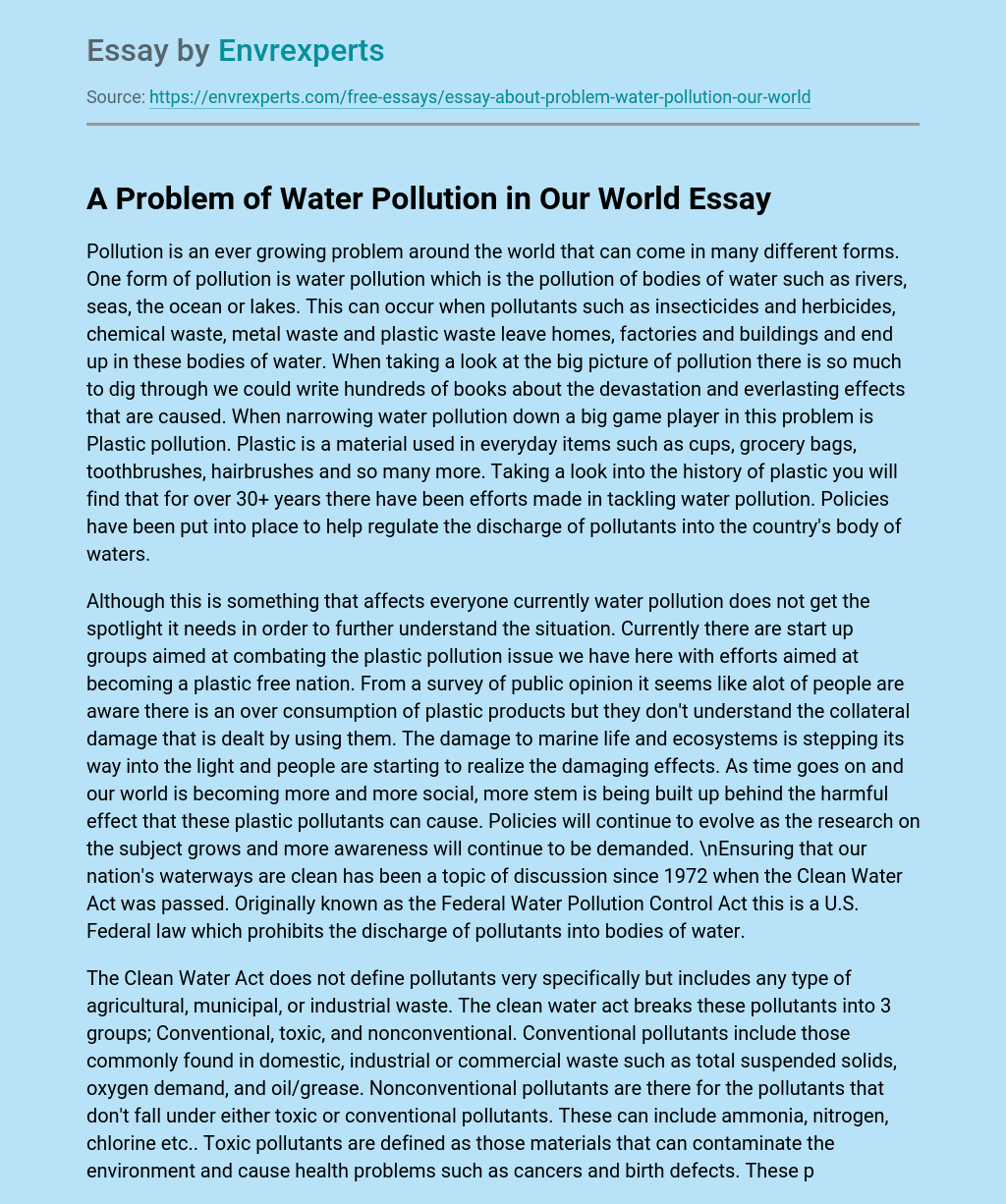