Across the world, there are regions where industrial activity either took place or is still happening. Before there was knowledge of soil pollution, many companies released contaminants into the ground around their location. The land in these areas becomes unsafe to use for growing crops on and often drink water nearby. These regions are classified as brownfields by the EPA, whose goal it is to remediate the polluted lands. There are a number of remediation processes currently practiced by the EPA, however, there are some that could be more efficient and cost effective than others, namely phytoremediation; using plants to naturally remove contaminants from soil and groundwater.

Don’t waste time
Get a verified writer to help you with A Proposal to Address the Soil Pollution Problems at the Site Owned by Dutchess Bleachery
Hire writer
$35.80 for a 2-page paper

The site I chose is a brownfield in Wappingers Falls, New York. Starting in 1832, the site was operated by Dutchess Bleachery. The company dyed textiles and produced acids and chemicals, likely aniline, mercuric chloride and arsenic pentoxide. Both of these substances contain heavy metal contaminants that are damaging to human and animal systems. During this time, the Wappinger Water, Gas, and Electric Company created a manufacture gas plant (MGP), using coal to produce a fuel for heating, lights, and ovens.

(NYSDEC Record of Decision, 2009) According to the New York State Department of Conservation, MGPs are continuing sources of pollution. Pollutants include semivolatile organic compounds in the coal tar, and cyanide based compounds within waste from purifiers on the site. (dec.ny.gov) The final round of development on the site began in 1958, when two metal plating companies worked at the site. These companies dumped between 20,000 to 60,000 gallons of plating waste into the adjacent creek daily.

The companies also reconditioned electronic equipment starting in 1972, which used substances including chromic acid, sulfuric acid, ammonium oxide, fluoride, caustic soda, and kerosene. (NYSDEC Record of Decision, 2009) most of these substances have entered the local soil and ground water, making the adjacent water toxic and relatively unsafe to live near.

There are a number of volatile and semivolatile organic compounds located in the site's soil, along with the inorganic substances: arsenic, cadmium, chromium, lead, copper, mercury, nickel, zinc, and cyanide. (NYSDEC Record of Decision, 2009) The DEC chose a remediation plan that includes removing and disposing of surface debris, and any former apparatuses in the area, off-site. The soil in the area will be contained and treated on site, and the nearby lagoon will be contained. All of this will be followed by continuous monitoring of the soil and water. The final cost estimate for these actions, including the immediate cleanup and containment, and the monitoring, is put at $10,600,000. (NYSDEC Record of Decision, 2009)

The current plan for remediation is very expensive, because it requires the movement of a lot of material and on-site labor. I would like to provide an alternate solution that would likely save the responsible party's money. Firstly, the process would start similarly to the current plan, in that all contaminated building material and machinery or storage units would be transported off-site and disposed of safely. This plan would require that any building foundation would also need to broke up and disposed of, or would need to pulverized sufficiently for planting on. Next, certain species of plants would be planted on site across the entire area. These species would be chosen specifically for the process known as phytoremediation.

Phytoremediation is a subset of bioremediation; using living processes to remediate contaminated soil. Phytoremediation is the process of using plants to either take up or destroy soil and groundwater contaminants. There are six different processes within phytoremediation, however three of them will be most relevant to this application. They are phytodegradation, phytoextraction, and phytovolatisation. The first of these, phytodegradation, begins underground where contaminated soil and groundwater meet the roots. The plants release certain enzymes that react with organic compounds, molecules formed with chains of carbon atoms. In this, the chains of carbon are broken down into smaller pieces that the plant can use, usually rendering them non-polluting. (United Nations Environmental Programme (UNEP)) Phytodegradation would help clean the brownfield site of the organic compounds found mostly in the coal tar.

The second process is phytoextraction, where after organic compounds are broken down by plant enzymes, inorganic substances dissolved in the water are taken in by the plant. The plants grow normally and naturally uptake the heavy metal compounds into their stems and leaves. Once the plants reach maturity, they must be uprooted and either composted or incinerated. (UNEP) After this more plants need to be planted until monitoring efforts conclude that the soil and water are clean enough. Phytoextraction is most efficient at taking in the metals copper, nickel, selenium, arsenic, cobalt, cadmium, and lead, although there are some researched species that can uptake chromium compounds. (Journal od Zhejiang University, 2008)

Lastly, phytovolatilisation takes places when plants respire through their leaves and enter the atmosphere where they dissipate from the area. This process is only applicable to organic compounds. (UNEP) Additionally, The United Nations Environmental Programme also stated that the ashes produced from incinerated metal-carrying plants takes up less than 10% of the space that disposed soils would. (UNEP)

The two types of plants that can be used for phytoremediation are trees and shrubs (woody plants) or hyper-accumulating herb like vegetation. Some examples of the latter are from the genus Brassica, and include cabbages, turnips and mustard plants. Other include sunflower species and the genus Thlaspi. These groups are described as hyper-accumulating because they are more efficient at taking in nutrients, and subsequently, contaminants. The other group, woody plants, are very efficient at taking up contaminants. Their main drawback is that they have a much longer maturation period than non-woody plants, meaning that the remediation process would be longer. SUNY ESF in Syracuse, New York is doing research on a plant species that will ultimately solve two problems. The species group that they are working with is the shrub willow (Salix spp.) Willow trees and shrubs are extremely efficient at taking in water, and are generally warned against planting near trains and water pipes, in case of damage. Shrub willows, as a woody plant can be used as biomass fuel, either by directly using them as fuel, assuming appropriate filters are in place, or by extracting the plant's cellulose to create ethanol. According to the SUNY ESF shrub willow report, "for every unit of fossil fuel energy used to grow, transport and convert willow to electricity, 11 to 16 units of usable electrical energy are produced.” (Lawrence B. Smart et. al.) This means that application of the shrub willow as a phytoremediator at the Wappingers, New York site, would both clean the soil and groundwater, and be a source of energy.

Before the New York Department of Conservation decided on remediation option 3, they put forth a number of other possibilities for cleanup practices. These potential solutions began with no remediation plan, as the site is not high-priority and then the construction of a fence around the area and monitoring so that site could not be degraded more. After the third option that is currently in effect, there was the idea to drain the lagoon and remove the sediment, along with the removal of the top foot or so of soil, and the last option was to drain the lagoon, remove all buildings and components from the site, and remove all of the soil to the bedrock. I agree with the decision of the DEC because the first two options did not involve enough actual remediation of the site, and the last two were twice and seven times as much money as the current plan, respectively. (NYSDEC Record of Decision, 2009)

In conclusion, my plan for the site would to follow through with the plans of the DEC, which include the removal of on-site debris. Once all building material were removed, plants such as willow shrubs would be planted on the majority of the site, along with hyper accumulating species planted on all of the surrounding hillslopes. Soil and water quality would continue at the site and every 3 to 4 years, the shrub willows would be harvested and sold to biomass power plants. This would continue until soil quality is at a safe standard, and overall the phytoremediation of the brownfields site would have a much lower budget than the current plan. Rather than using machinery and more additional substances to solve a problem, this is an example of how natural processes can solve existing problems.

A Proposal to Address the Soil Pollution Problems at the Site Owned by Dutchess Bleachery. (2021, Oct 31). Retrieved from http://envrexperts.com/free-essays/essay-about-proposal-address-soil-pollution-problems-site-owned-dutchess-bleachery 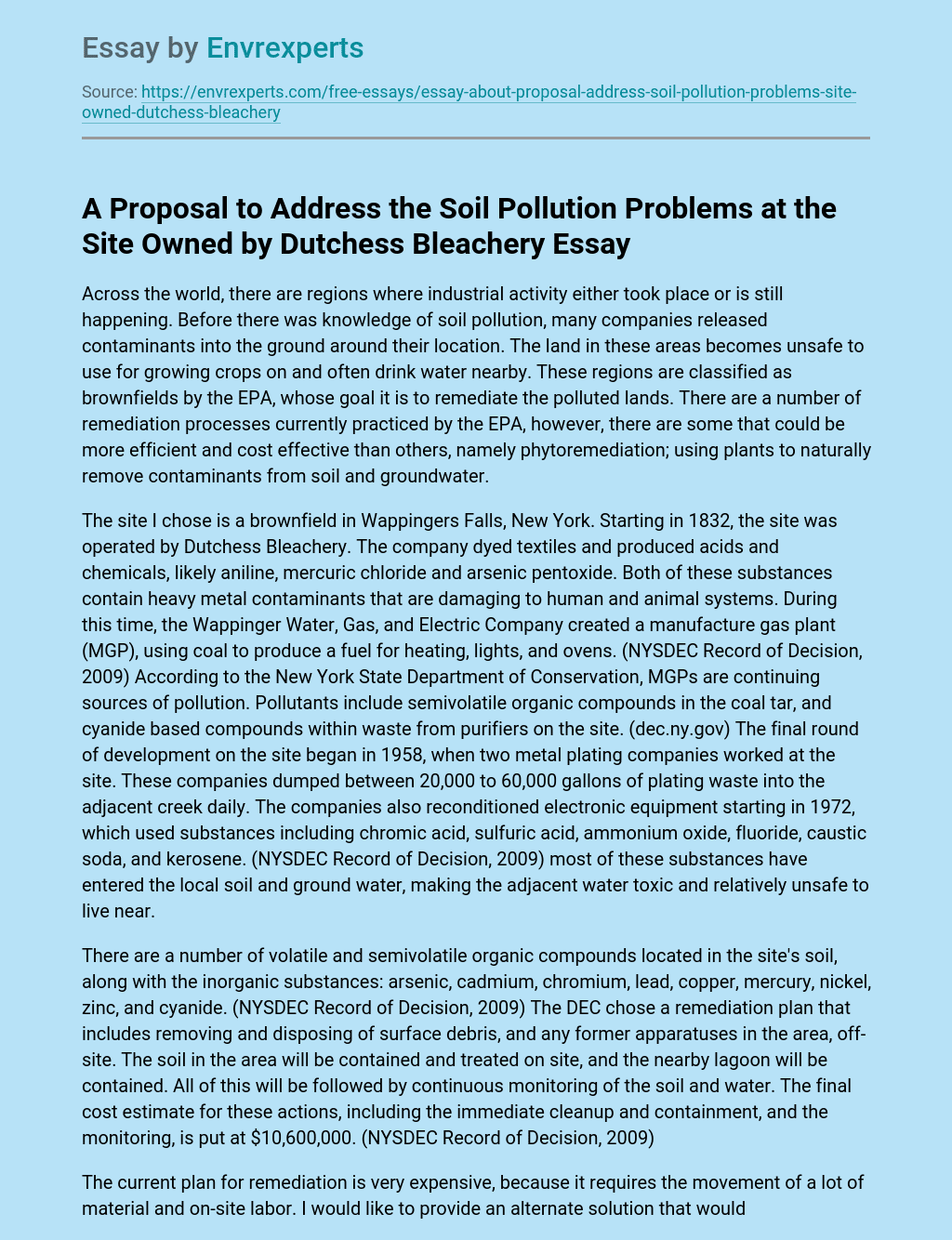