In the journal article “Re-wilding North America,” twelve conservation scientists and scholars wrote a proposal for restoring large wild vertebrates from the Pleistocene era into North America. The Pleistocene era is defined as first epoch of the Quaternary period. These biologists accepted that the presence of the human species was apparent throughout the planet due to our mostly negative ecological influence. The scientists also agreed that the current definition of “wildness" is meager compared to the wilderness that roamed when humans first arrived in North America.

Don’t waste time
Get a verified writer to help you with A Proposal for the Restoration of Large Wild Vertebrates from the Pleistocene Era into North America in Re-wilding North America
Hire writer
$35.80 for a 2-page paper

The final accepted premise was that the trigger of this downfall of wildness was the human species, and thus it is our duty to work to restore this prior existence of wildlife. As a result, the researchers believe that a solution to this absence of wildlife is to reintroduce species, or relatives of the species, that were formerly native to the land.

The scientists believe this is an "optimistic proposal” because the idea would "elevate the very goal of conservation.

” It would be a great achievement to bring back the abundant biodiversity in the Americas, which consisted of natural resources, plants, and animals such as lions and elephants, that existed over thirteen thousand years ago. Human alteration of the land caused changes in the ecosystem. Still, the approach is one that is idealistic because the proposal is uncanonical.

A motivation for reintroduction is to occupy the niches, or ecological roles, that have been vacant since earlier times.

Without these niches, the environment is altered. For example, there are no more megafauna, like oxen, mammoths, and wild horses in Siberia to produce fertile grasses and and trample mosses through manure, leading to the creation of a barren tundra. In the north Pacific, with decreasing great whale megafauna due to hunting, their predators, the killer whales, are now eating and reducing numbers of smaller organisms. Although it can be quite hard to "resurrect" species, we can use "proxies," or relatives or ecological equivalents, which can occupy missing megafaunal niches. With proxies, the actual, endangered species can be placed in protection while the “new” ones occupy their niches. African critics, however, think that this plan would lead to a loss in ecotourism dollars because people would pay only to see rare, beautiful creatures.

An example of successful reintroduction can be seen with gray wolves at Yellowstone National Park. When wolves were removed, elks browsed and reduced aspens, cottonwoods, and willows. When wolves were reintroduced, they killed off the elks, leading to the regrowth of the aforementioned fauna. Many species that relied on fauna also replenished, for the traditional food web was recreated.

The response to the rewilding proposal is usually negative, as many are unaware of the topic in great depth. Also, many are apprehensive about how the proposal could be incorporated into multiple cities. Furthermore, many are unaware of the importance of the Pleistocene fauna. Responses to the proposition are usually not rooted in science, but rather rooted in human nature, for reintroducing wild animals makes people fearful,making the proposition difficult to carry out on a large scale.

The Pleistocene rewilding proposal suggests that there are ideas to restore wildlife that have become extinct in a certain area and intends to restore ecosystems to a more natural state by introducing species that were native to the land. The proposal challenges the status quo of conservation and claims that more needs to be done, sparking conversation. Proponents of the proposal recognize that humans caused the destruction of the original Pleistocene species, so we should repair it. The proposal, as well as the responses, suggest that conservation biology is a multi-faceted science that has to be carefully planned out, although social backlash can prevent progress. Proponents of the proposal argue that ecosystems should be brought back to the way they were before the time that humans established their dominance and caused the rapid decline of other species, although making the proposal a reality may be more difficult.

1) There were twelve total researchers who aided in the piece “Re-wilding North America” which was published by the prestigious journal Nature. Despite their different roles and occupations in the field of ecology, all twelve scholars agreed on several premises. They accepted that, for one, presence of the human species was apparent throughout the planet, due to our ecological influence. The scientists also agreed that today's definition of “wildness” is meager compared to the wilderness that roamed when humans first arrived in North America. Lastly, the final accepted premise was that the trigger of this downfall of wildness has the human species to blame, and thus it is our duty to repair this prior existence of wildlife. These premises are reasonable, and I agree with each of them, as the author provided enough information before stating the conjunctions. He gave examples of the wildlife prior to humans arriving to North America, provided a reason to help restore this wildlife, and proposed a plausible solution in re wilding.

2) The co-authors of this paper consider it to be an optimistic proposal, as thirteen thousand years ago, when the natives first step foot into the land, the Americas had an abundant amount of natural resources, plants, and animals. Much before the arrival of the natives there was an abundant amount of animals, such as elephants and lions, roaming around North America freely as there was no urbanization or advancements in technology made yet. It was just nature and animals co-existing. Once humans came into the picture, they altered the land, disrupting the critters' lifestyles and hence reducing their numbers. The past is the past and the authors are optimistic as this cannot happen again, elephants and animals roaming freely across North America without positing as a threat or receiving a threat (i.e. hunters) thus putting their lives and human lives in jeopardy.

3) These two pieces of research are used to support the proposal to resurrect critters from thousands of years ago. The research illustrates the benefits of these critters. For example, as Zimov describes, there are no more creatures (coined megafauna) in Siberia to produce fertile grasses (through manure) and trample mosses, leading to the creation of a barren tundra. This tundra is now melting due to global warming, which is releasing a dangerous amount of carbon. And as Springer and Estes illustrate with North Pacific marine animals, with decreasing great whale megafauna due to hunting, the ecosystem broke – their predator, the killer whale, would be left only with smaller fish as a food option, and these smaller fish would eventually decrease. Overall, these two studies illustrate the benefits of resurrecting species.

4) Since it is almost impossible to resurrect species, "proxies” would be "close relatives and ecological equivalents that would serve as megafaunal stand-ins, that might rekindle what the mass extinction had extinguished.” Advantages are obvious, for proxies can fill in missing niches in the environment normally occupied by megafaunal species. With proxies, the actual endangered species can be protected while others fill their niches. This is where disadvantages come in. Africans critics were angered by this "proxies" idea. Since the rare, beautiful species would no longer be in the wild, Africa would lose ecotourism dollars for people that like the rareness. Also, hunters would be more motivated to kill the protected animals (killing protecting animals will generate more money on the market.

5) The author means that the response to the proposition of rewilding that Harry Greene, evolutionary biologist, gave in the National Museum of Natural History was not fierce or scientific. Many of those in the audience were quiet and did not have responses for Greene because many are unaware of the importance of the Pleistocene and have not thought about the subject in much detail. Greene is said to have been surprised at the lameness of his colleagues' responses, according to the author. Also, the author means that the response to the proposition is not rooted in science, but rather rooted in human nature. The proposition, which involves reintroducing wild animals makes people fearful, which is why the proposition is difficult to introduce.

6) The rewilding proposal suggests that there are ideas to restore wildlife that has become extinct in a certain area. This proposal intends to restore ecosystems to a more natural state by introducing species that were native to the land. The proposal suggests that ecosystems should be brought back to the way they were even before any humans had set foot in the Americas. This would be a very large conservation effort. The proposal outright challenges that status quo of conservation and claims that more needs to be done in the current community, which is sometimes recognized as “falling asleep” and having "gone nowhere.” The proposal was a bold statement, which achieved the purpose of sparking conversation about wildlife conservation. Still, the responses to the proposal are usually not rooted in scientific inquiry but rather highlight the fear in having the proposal being carried out. The mere idea of restoring the ecosystem to the way it was before humans arrived is quite a foreign and unaccepted idea, leading the proposal to be controversial. Proponents of the proposal recognize that humans were the cause of the destruction of the original Pleistocene species, so we, as part of our society, should take on the duty of repairing it. The proposal as well as the responses suggest that conservation biology is amulti-faceted and meticulous science that has to be carefully planned out and often faces resistance by those who are afraid of the foreign territory.

A Proposal for the Restoration of Large Wild Vertebrates from the Pleistocene Era into North America in Re-wilding North America. (2021, Oct 31). Retrieved from http://envrexperts.com/free-essays/essay-about-proposal-restoration-large-wild-vertebrates-pleistocene-era-north-america-re-wilding-north-america 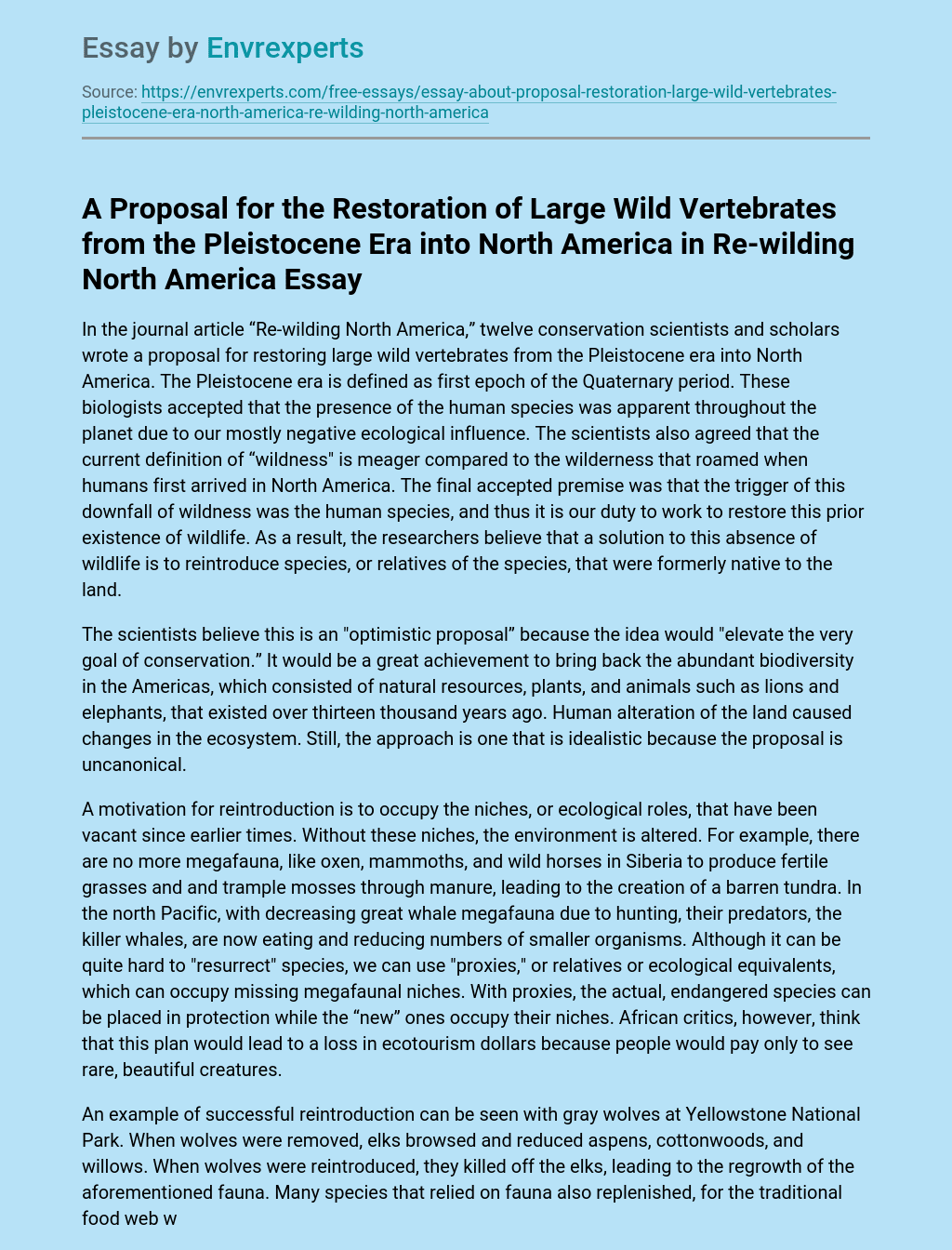