A Proposed Solution to Eliminate Invasive Species in Florida

Worldwide, there are invasive species that are non-native to their environment, which can eventually ruin a whole ecosystem. To begin, Florida is known for having exotic plants and animals in their invasive species kingdom. If you are unaware, Florida has had an invasive species problem since the late 1800's (“Brazilian Peppertree"). Although this problem has been around for hundreds of years, people still struggle to find a safe solution. A couple of invasive species in Florida are the Lionfish and Burmese python.

Don’t waste time
Get a verified writer to help you with A Proposed Solution to Eliminate Invasive Species in Florida
Hire writer
$35.80 for a 2-page paper

Invasive species have been terrorizing ecosystems for thousands of years, not to mention the money that goes into the removing of the invasive species. Many approaches have been taken to stop invasive animals and plants, such as killing them in various ways such as pesticides, hunting and trapping.

Despite the effort to stop non-indigenous species, they still seem to find a way to overcome various obstacles.

The Lionfish is a fish used in many aquariums mainly for its unique look, but this unique looking fish will soon be a problem. The Lionfish was introduced to the Atlantic in the early 1990's and since then it has slowly expanded it habitat. The first recorded sighting of a Lionfish was in 2009 in the Florida Keys (“Non-Native Fishes in Florida Freshwaters).

The only problem with the Lionfish living in the Atlantic is that they have no natural predators in that region. Ecologists see the Lionfish as a threat because they can spawn year-round, The Lionfish's diet consists of crustaceans and other native fish that live there. This will soon be a problem mainly because the lack of predators to the Lionfish. The fish will soon deplete the ecosystem causing an imbalance that can later destroy the whole ecosystem.

The Burmese Python is an exotic reptile known for its large size and being able not to eat for weeks or even months, as is grows it prey can be the size of a deer. This exotic reptile is sometimes even kept as a pet. These snakes are the largest of the snake family. They originated from Southeast Asia and they have been imported by planes or ships. The Burmese Python is more familiar to the Everglades (“Not Seeing Is Not Believing”). The python does not have any known predators, but the python is a predator to a large part of the Everglades ecosystem which can cause a problem in the balance of the ecosystem. They eat anything from mammals to birds and on rare occasions even an alligator. Since 2002 there has been over 2,000 pythons removed from the Everglades, which was only a small percentage that was removed. This problem most likely occurred when pet owners accidentally or purposefully released the python to the wild due to its size (“Burmese Python”). On some rare occasions, many people will release their python because it will eventually try to eat the owner. The Burmese Python is known as an invasive species to the Everglades because it is eating the same animals that the National park is trying to protect. The National park has worked a bit over a decade to stop these reptiles, but not much seems to work.

Although an invasive species is not a problem in an ecosystem at first, it is never wise to ignore them and let them grow, because they can eventually be a problem too big to handle. Invasive species have been a problem for hundreds of years. We are still learning on how to deal with the problem, in some cases costing people millions of dollars. The Lionfish is becoming a bigger problem, but we can also look at it a different way and use them for food or sports fishing. The Burmese Python is a problem, but we might be able to use a few to kill an invasive species in a different ecosystem; such as the black rat. This could potentially fix a few problems with them. We need to act now to save the depleting ecosystems that we have.

As there are causes, this also means that they have effects. Here are the three main effects that result from invasive species. The initial effect is that an invasive animal can result in thousands of dollars in damages, such as ruining wiring, cooling systems, and lighting. Anything from a size of a rodent or something as large as a bear can do the same amount of cost worth in damages. The succeeding effect is when an invasive species does not have any natural predator they can end up taking over a native species habitat. The invasive can either take over homes of a native species or simply eating or destroying their homes. The Tartarian effect is the worst thing an invasive species can do is ruin an ecosystem. If an invasive species thrives in an ecosystem where they have no predators, they can simply eat one animal in the food chain and cause every other animal to starve because lack of food.

These solutions are all excellent, however there is one that is more prominent than the others. The best one is to randomly put birth control in invasive species food which could prevent them from expanding. This method is not only effective it is very cheap at the same time. This method can also be used to stall to if a different solution is needed. Many researchers are always searching for a more efficient, cheap, and convenient solution, see if you can come up with a better solution.

A Proposed Solution to Eliminate Invasive Species in Florida. (2021, Oct 31). Retrieved from http://envrexperts.com/free-essays/essay-about-proposed-solution-eliminate-invasive-species-florida 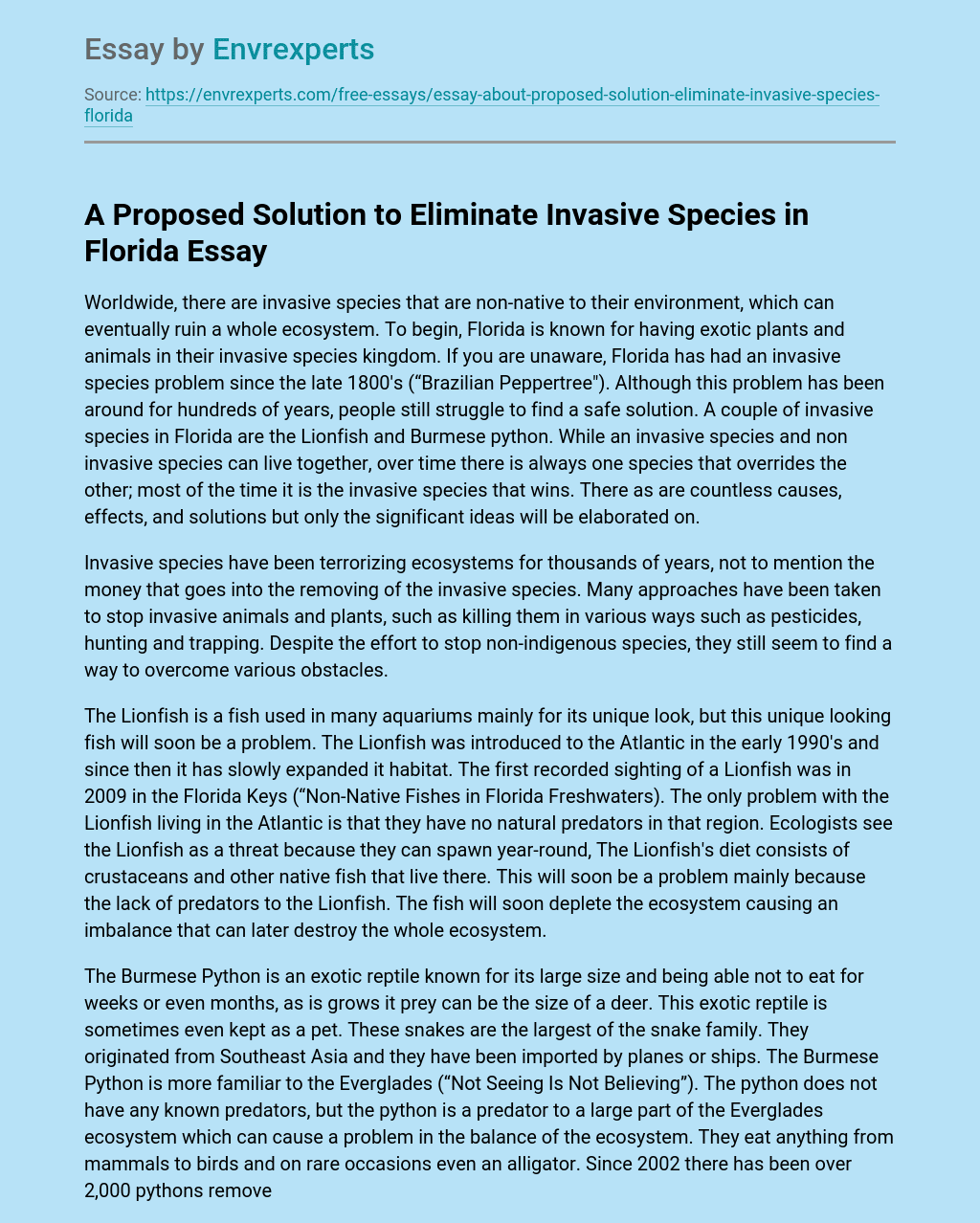