The Dakota Access Pipeline (DAPL) has become the prime example of the classic big business vs environment conflict. The legalities of the matter are complicated as this particular pipeline deals with a special case, Native American grounds.

The easier to understand phenomenon of this matter is the treatment of the protestors. The police brutality and excessive force inflicted on the peaceful protestors by the police is something the black community knows all too well. An injustice anywhere is a threat to justice everywhere, police brutality is definitely a national spotlight problem and right now this pipeline is center stage.

Don’t waste time
Get a verified writer to help you with Question of Dakota Access Pipeline
Hire writer
$35.80 for a 2-page paper

Socrates, and MLK both argue that it is our moral obligation as citizens to combat both, just laws being applied in an unjust manner, and clear cut unjust laws. The role of civil disobedience is the same today as it was in the 1960's and before. The will of the individual is threatened by harsh punishments but nevertheless, free to face them for the sake of the moral obligation to do what is right.

In the 1960's unjust Jim crow laws ran rampant in the south, simultaneously Americans were drafted into a war they didn't want to fight.

The United forces is now an all volunteer program and the selective service is only to be used as a contingency. This would not have happened without the efforts of those who peacefully protested. Jim Crow laws are no more, and it is quickly called upon as a reference for what not to do.

Hundreds of people followed in Socrates' footsteps, they refused to meet injustice with more injustice and they died for their beliefs ultimately making their efforts immortal. Every last one of us can choose to break the law, any law, at any time. The will of every individual is always going to be restricted by laws.

Breaking the law should be met with an immediate and appropriate response. When that response is inappropriate in any way, it is the responsibility of the rest of us to shed light on this injustice. In relation to the DAPL pipeline these protestors are going through the same thing, the main difference being, the laws at play here are not necessarily unjust but the response at the hands of the authorities are absolutely inappropriate. The Energy Transfer Partners (ETP) is the company building the DAPL pipeline. They began their efforts in 2012 with appealing to all the necessary entities: North Dakota Public Service Commission, South Dakota Public Utilities Commission, Iowa Utilities Board and the Illinois Commerce Commission. According to ETP's website they initially began meeting with these entities in 2014. They have since received all the approval they need from all of these entities, and as far as I can find there are no laws that the building of this pipeline is violating. In regards to the native American lands that the pipeline is affecting, the pipeline isn't actually going through the standing rock reservation it does however, go directly underneath a portion of the Missouri River that literally borders their reservation.

To put it simply, the maps of both the standing rock reservation and the DAPL map of the pipeline show consistently that burial grounds are not in question, however, the concerns that this pipeline will affect their water is very valid and I would have the same concerns myself. The People of the Standing Rock Sioux tribe, have non-violently demonstrated via prayer circles, blocking highways with a tipi, chants, and signs. The opposition they have faced has included: the private security force “TigerSwan” and their attack dogs, police with pepper spray, mace, a number of ATVs, five tanks, two helicopters, and military-equipped humvees. This is excessive and inappropriate, MLK would say that now that this injustice has revealed itself it is the obligation of all of us to fight it with a just response.

The actual efforts of the Standing Rock Sioux tribe are of course selfish by nature because they are the ones actually in jeopardy, whereas the efforts of the many other protestors from other Native American tribes, Celebrities, and people like you and me from other states demonstrate pure altruism. The heart of civil disobedience is self suffering which these protestors are indeed enduring, the question is, how much do they need to endure?

So to answer the afore mentioned question, the oppressed must endure the pain until the aggressors question why they are hurting others. Is the DAPL doing anything illegal in their building of the pipeline? No. is a pipeline reasonably safe in regards to water integrity? Well it is not unreasonable to say no, pipelines are not safe in regards to water integrity. In the period of 2002-2007 pipelines were accountable for a total spillage of over 100 barrels per billion ton miles. In the grand scheme of things that is not a scary number. However, one barrel of crude oil can significantly poison an entire area, or water supply. The Standing Rock Sioux tribe is dealing with extreme problems internally already, with an unemployment rate of 71% and a poverty rate of 61%. These people are not living by lavish means, they are barely living by natural means, they cannot afford a water corruption. Based off of that information I believe, they should have a say on if this pipeline can be built so close in proximity to their reservoir of water. Protestors armed with prayers and chants and signs, are being pepper sprayed, bitten by dogs, arrested by the hundreds, shot at, and should this pipe get built, the inhabitants might eventually be poisoned. The laws in this case are just, and sensical, the application however, is uncalled for.

If we as a nation were to see this authoritarian reaction to any other peaceful demonstration we would always be outraged because, this is unreasonable. In conclusion I hope that a compromise is reached among the Native American peoples and the ETP on how this pipeline can be built because these people have suffered enough. 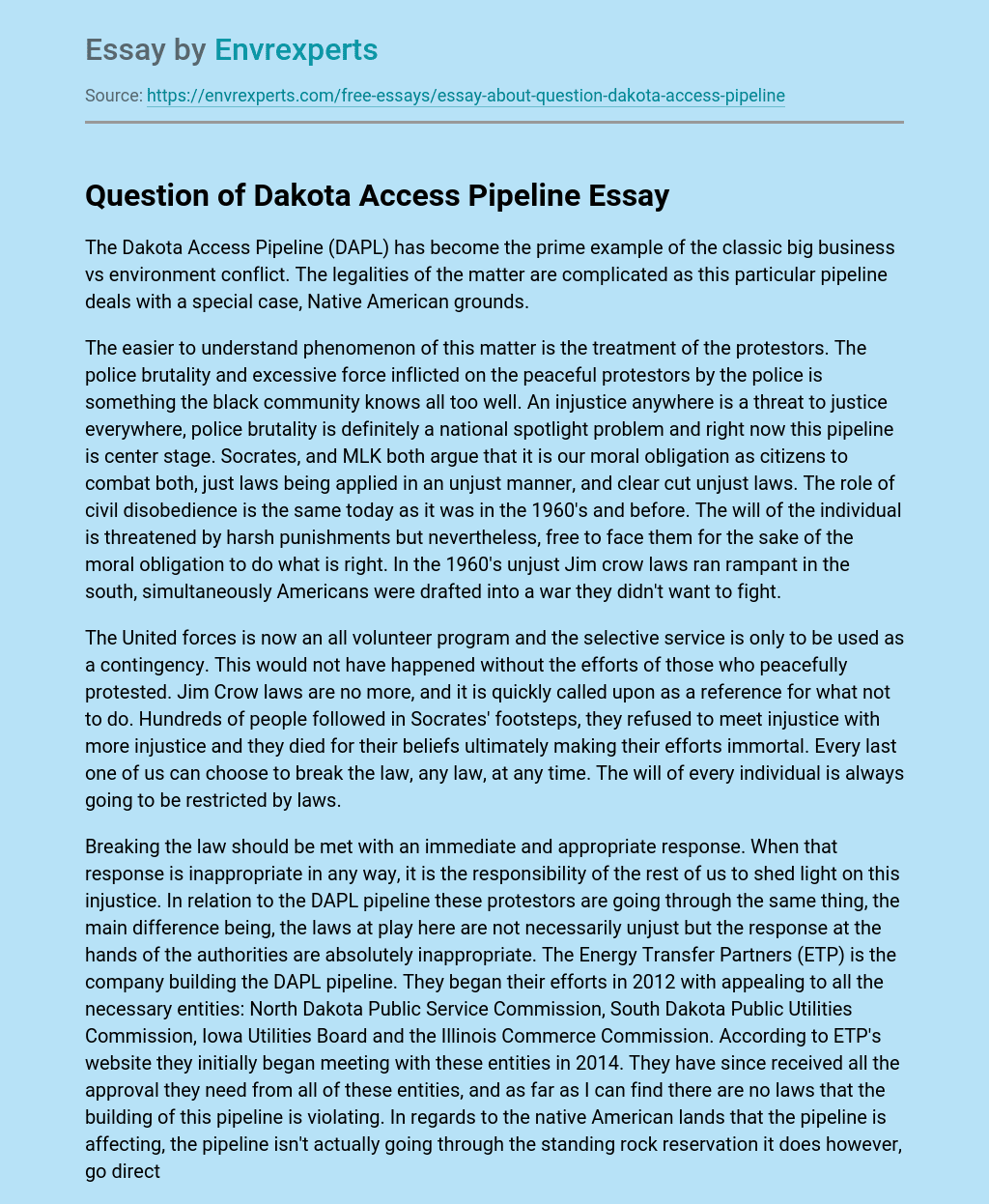