According to a 2005 MIT study, intensity and durations of hurricanes and tropical storms have increased by one hundred percent since 1970. The estimated cost of damages caused by hurricanes hitting the U.S. coast in 2005 alone was one hundred billion dollars ($100,000,000,000) according to the National Climatic Data Center. By the year 2030, it is predicted that Glacier National Park will have no glaciers left, according to the U.S. Geological Survey predictions. According to the Arctic Climate Impact Assessment, in the last thirty years, four hundred thousand square miles (approximately the size of Texas) of Arctic Sea ice have melted, which poses the largest threat to the natural habitat of the polar bear.

Don’t waste time
Get a verified writer to help you with The Question of Whether Global Warming Is Actually Happening and What Fuels It
Hire writer
$35.80 for a 2-page paper

Anywhere from fifteen to thirty-seven percent of plant and animal species could possibly be wiped out by the year 2050. We, the United States of America, are at the top of the totem pole when it comes to ranking the top contributing nations toward global warming pollution compared to other large nations.

Are you, as a reader and fellow human being, willing to make a few minor sacrifices in order to recreate a better Earth for our generations yet to come? If so, read on and seriously consider making small alterations in your everyday life style. If not, read on and interpret this side of the controversy in opposition to the typical lifestyle of an American citizen who subconsciously contributes to Global Warming every day.

Everyone has the same question: Is Global Warming really happening? The answer is yes, the Earth is already showing many signs of worldwide climate change.

Before we can make any such reasonable effort toward stopping or even slowing the effects of Global Warming, we need to understand exactly what Global Warming is and what causes excess heat to be trapped in the atmosphere. Global Warming by definition is as follows: an increase in the world's temperatures, believed to be caused in part by the greenhouse effect. Former President Al Gore expresses that it is all planetary emergency-a crisis that threatens the survival of our civilization and the habitability of the Earth. The majority of environmental groups and environmentalists in general stress the importance of the same message, Global warming is real. Gases like Carbon dioxide from use of fossil fuels such as oil, coal, and natural gas is over time building up in the Earth's atmosphere. Carbon dioxide traps heat that would otherwise pass through the atmosphere into outer space.

In the years to come, what effect will global warming have on the Earth, human beings, and all the entities in between? Obviously, the average temperature of the Earth will increase. Increasing temperatures will cause polar ice caps to melt which is the beginning of a large chain reaction. While ice caps are melting, sea levels will rise. There are five million, seven hundred and seventy-three cubic miles worth of water in ice caps, permanent snow, and glaciers worldwide. According to the National Snow and Ice Data Center, if all glaciers melted today the oceans would rise approximately two hundred and thirty feet. Don't panic, we are lucky that it's impossible for all the glaciers in the world to melt at one time. The point being that sea levels have potential to rise dramatically if beckoned by Global Warming. Ice caps melting would also throw the global ecosystem right out of alignment. Ice caps are fresh water, when they melt a process called desalination dilutes ocean water with fresh water making it less allsalty.âbi Desalination of the gulf current will deform ocean currents which regulate temperatures. Landscapes will change in the Arctic Circle because of higher temperatures melting ice and snow which will endanger multiple species of life. Few of the most adaptable will survive. Ice caps are white and reflect sunlight mostly back into space, naturally cooling the Earthâlis surface. With ice caps gone, the ocean is the only reflector. Dark colors absorb sunlight as opposed to lighter colors which reflect, leading to further warming of the Earth's surface. Also, it is believed that as northern countries will become warmer, disease carrying insects will migrate north, bringing plague and other serious health concerns to the world's population. Viruses and parasites that are most adequate and efficient in warmer climates will multiply and succeed in becoming stronger as immunity of the Earth's population will decrease, resulting in more casualties due to illnesses.

What can you do to help prevent or slow down the effects of global warming? Motor vehicles play a colossal role in Global Warming because of the exhaust fumes given off while driving. Driving less will create less automobile exhaust fumes. Replacing household light bulbs with energy-efficient fluorescents that use less wattage for the same amount of light will decrease energy usage. Unplugging electronics that arenâbit being used saves tremendous amounts of energy. Even if the electronic is off, if it is still plugged in, it is still using energy. Insulate your home better as well as your water heater. Insulating your water heater will keep the water enclosed warmer so the heater doesn't have to use nearly as much energy. Finally, plant a few trees. Planting trees will in return produce oxygen through photosynthesis. Through Photosynthesis, trees naturally give off oxygen as waste while producing chlorophyll to nourish itself.

In conclusion, the causes of Global Warming are as real as the effects they produce. While personalities fight over who is right and who is wrong in this extremely controversial situation, the majorities of people just stand around and watch to see who is victorious. The truth is, Global Warming is a reality. In order to keep this planet beautiful and healthy for our future offspring and generations to come, we need to act now. l'm willing enough to sacrifice minor luxuries in my life to help keep the Earth clean for the next generation of life that has yet to be born. The fate of humanity is in all of our hands, we just have to care enough to make change the new reality.

The Question of Whether Global Warming Is Actually Happening and What Fuels It. (2021, Oct 31). Retrieved from http://envrexperts.com/free-essays/essay-about-question-whether-global-warming-actually-happening-and-what-fuels-it 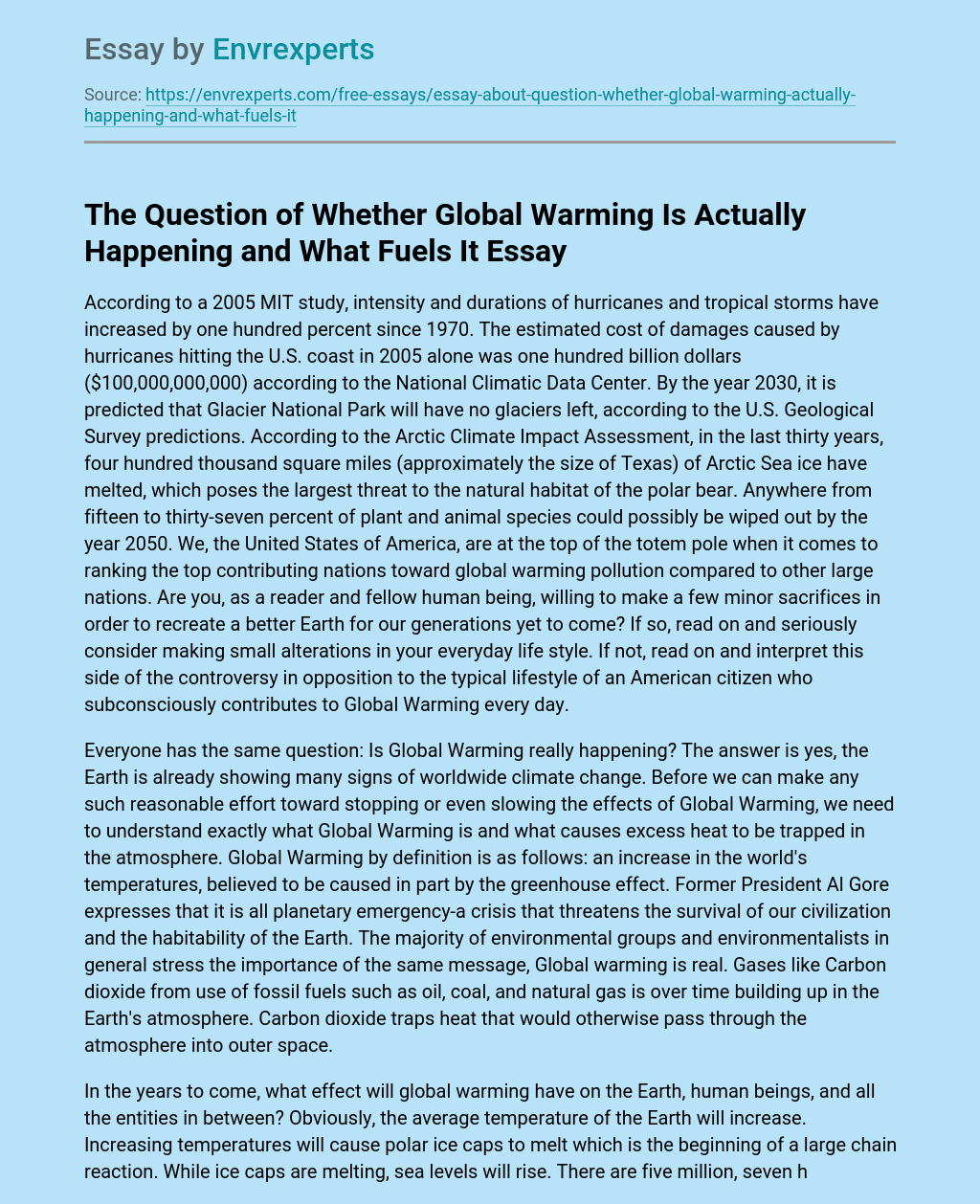