Rainfaland and Temperature Trends in Kimberley

Climate change is one of the major contemporary concerns of humanity in the twenty-first century and has not only influenced the quantity of rainfall received but also other important characteristics, such as rainfall intensity, length of the rain season, rainfall onset and cessation dates, trends and number of rainy days in a given season (Recha et al. 2012; Mushore et al. 2017; Reason2017).
Global climate change has been detected by warming the atmosphere, and ocean temperature, variations in the global water cycle, rising ice loss, sea level rise, decreasing snow and ice, which is predominantly distorted by anthropogenic activities (IPCC, 2013).

Don’t waste time
Get a verified writer to help you with Rainfaland and Temperature Trends in Kimberley
Hire writer
$35.80 for a 2-page paper

In the atmosphere, the greenhouse gases such as the water vapour, carbon dioxide and methane act as glass roof of the greenhouse by trapping the heat and warming the sphere. The agriculture and allied fields are greatly affected by climate variability; amid this, the temperature and rainfall directly distress the farm production (Thornton et al., 2014). Moreover, it has indirect effects on the increasing soil erosion, decreasing water supplies, groundwater level and irrigation (Houghton et al.

, 2001).
Climatic variability is a major factor controlling the structure and function of grassland ecosystems worldwide. Altered rainfall patterns and warming are integral components of most global climate change scenarios. Further, the combined effects of increased temperatures and temporal variability in rainfall patterns on soil moisture and plant growth may be much larger, and in opposition to, the well-documented effects of elevated carbon dioxide levels. Extreme weather, such as heavy rainfall and high winds can threaten people, property and our environment.

Climate change is expected to bring warmer weather and more floods. Rainfall events in a particular area vary, depending on its distance from the equator, inland or coastal location, and topography. \nThe rainfall received in an area is an important factor in determining the amount of water available to meet various demands, such as agricultural, industrial, domestic water supply and for hydroelectric power generation. Global climate changes may influence long-term rainfall patterns impacting the availability of water, along with the danger of increasing occurrences of droughts and floods. Temperature and its changes impact a number of hydrological processes including rainfall and these processes, in turn, also impact temperature (e.g., cooling due to rain/snow). Changes in rainfall due to global warming will influence the hydrological cycle and the pattern of stream-flows and demands (particularly agricultural), requiring a review of hydrologic design and management practices. The trend analysis of rainfall, temperature and other climatic variables on different spatial scales will help in the construction of future climate scenarios.

Kimberley is the capital and largest city of the Northern Cape Province of South Africa. It is located approximately 110 km east of the confluence of the Vaal and Orange Rivers. The city has considerable historical significance due to its diamond mining past and the siege during the Second Boer War. Kimberley is situated almost in the Centre of South Africa between Cape Town and Johannesburg. Kimberley is situated at 28.73° South latitude, 24.77° East longitude and 1219 meters elevation above the sea level. It has a population of +/- 225,160, a total land mass area of 164.3km^2 and a density of 1.400/km^2
It not only has a history immersed in diamonds but the Big Hole – a huge circular pit right in the middle of town – is a huge crater dug almost entirely with picks and shovels in an effort to reach the stones.
Kimberley’s Big Hole, measuring over a kilometre deep with a surface area of 17 hectares formed part of the diamond rush of the 1870s where men, with little more than man-made tools, managed to remove three tons of diamonds and 22,5 million tons of earth in the process. Today the hole is not as deep. The Big Hole today continues to draw attention and has been converted into an open air museum with a rather daring lookout point directly over the hole.
Surrounding Kimberley are many memorials and sites of some important battles of the Anglo-Boer war, most notably the Siege of Kimberley in 1899 with the famous \"Long Cecil\" on display, and the battlefield site of Magersfontein where Boer General used trench warfare for the first time.
The city boasts other firsts like the first city in the Southern Hemisphere to install electric street lighting and the first city in South Africa to switch to an automatic exchanges, and it housed the country\'s first Stock Exchange.
https://www.kimberley.org.za/wiki/#Climate_and_geography [Assessed 11th March, 2020]\n

Aim: The aim of this study is to analyse the rainfall and temperature trend in Kimberley, South Africa, for the period of 1931 -2020.

A thorough knowledge of the behavior of climate will contribute significantly to the wellbeing of the people of Kimberley. The result from this study will indicate if additional analysis is required and if so serve as a necessary input for forecast, enhance decision making and planning process to mitigate any adverse consequence of changing climate.

The intergovernmental panel on climate change (IPCC) has shown that the world climate is changing and will continue to change, the question of climate change, variation, fluctuation and trend is no longer debatable. These changes do affect our daily lives in terms of agricultural production, floods, drought and many others. What is not clear is the nature of these changes in specific region like Kimberley.

Rainfaland and Temperature Trends in Kimberley. (2021, Oct 31). Retrieved from http://envrexperts.com/free-essays/essay-about-rainfaland-and-temperature-trends-kimberley 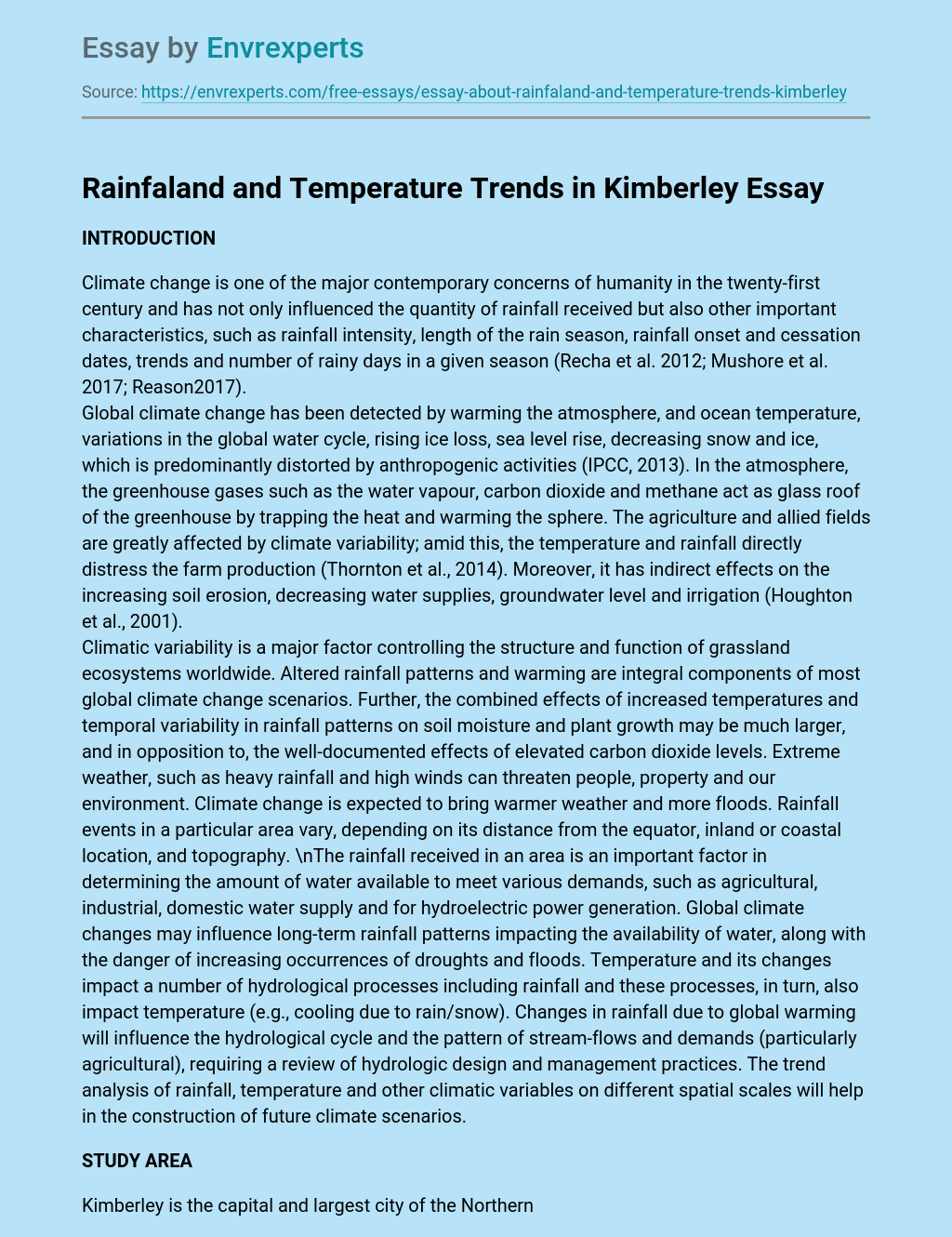