The Realities and Consequences of Climate Change

What is climate change? How does it affect society and the environment? Are humans to blame, and if so, can we fix it? To understand the full impacts of climate change on the globe and the environment, one must first comprehend what “climate” means at its most basic understanding. Climate is defined as the composite or generally prevailing patterns of weather conditions of a region. As opposed to weather which measures the day-to-day state of the atmosphere, climate refers to the average weather patterns of a region over an extended period of time.

Don’t waste time
Get a verified writer to help you with The Realities and Consequences of Climate Change
Hire writer
$35.80 for a 2-page paper

Over the past century, environmental scientists have studied and analyzed the change in global and regional climate patterns, concluding that the Earth is warming at an alarming and rapid rate. This abnormal and extreme change of temperature of the Earth’s atmosphere is what is known as climate change today.
The overwhelming consensus of climate scientists concur that human activities, particularly the burning of fossil fuels (coal, oil, and gas), are responsible for the majority of the climate change currently being observed.

Emissions from the burning of fossil fuels creates what is known as greenhouse gasses which leads to the increase of the Earth’s average surface temperature as they are ozone-depleting substances. The upsurge of greenhouse gases emitted into the atmosphere such as methane, carbon dioxide, and nitrous oxide, traps the heat from the sun as well as the heat which Earth radiates back into space. The National Research Council of the National Academies notes, “as concentrations of heat-trapping greenhouse gases increase in the atmosphere, Earth’s natural greenhouse effect is enhanced (like a thick blanket), causing surface temperatures to rise” (NRNA 4).

As a result of the increase of the Earths’ average temperature—observations document the destabilization of crucial chemical balances needed for the environment to thrive and function effectively.
Although these chemical exchanges and relationships occur on the molecular level, its impact can be observed on a much larger scale. The near-global retreat of glaciers over the last century provides some of the most iconic imagery for communicating the reality and consequences of anthropogenic climate change to the public (Roe 1). The rate at which glaciers and ice caps have decreased over the past decades provides both scientists and the general public
a prime example of the consequences of selfish human behavior. As an effect of the decrees of glaciers and ice caps, the reduction of the albedo in turn causes more heat from the sun to be absorbed as opposed to being radiated back into space. In other words, the more glaciers and ice caps that are lost, the warmer the Earth will become. Mark Dyurgerov states that the “averaged annual volume loss [of glaciers and ice caps] is 147 mm-yr-1 in water equivalent, totaling 3.7 x 103 km3 over 37 yr. … followed by more rapid loss of ice volume and further acceleration in the last decade” (Dyurgerov 2). The statistics which Dyurgerov provides highlights the startling truth that glaciers and ice caps are feverishly melting faster as the years continue. Dyurgerov goes on to note, “perhaps most significant is an increase in annual accumulation along with an increase in melting; these produce a marked increase in the annual turnover or amplitude. The rise in air temperature suggested by the temperature sensitivities of glaciers in cold regions [reveals that] the warming is accelerating” (Dyurgerov 2). This data affirms to readers that the annual accumulation of melted ice is increasing yearly, resulting in and contributing to rising sea levels and temperatures.
Unfortunately, however, climate change has become a debated subject for there are people who are stuck in denial and ignorance as they refuse to accept proven scientific data. Politicians and corporations who profit off of climate change are unwilling to acknowledge the realities and consequences resulted from their insensitivities. The popular argument promoted by such people claim that the Earth naturally goes through cooling and warming stages and that it will correct itself over time. Albeit there is truth to their statement, it still does not explain why the Earth is experiencing such a rapid increase of temperature. Evidence from ice coring reveals that in the previous years of the Earth’s existence, temperature has a direct relationship to the amount of greenhouse gases in the atmosphere. Trapped air molecules inside the ice holds samples of the air conditions at the time, allowing scientists to conclude that temperatures rise consistently with carbon dioxide. Meaning, the more CO2 in the air, the higher the temperatures will become. In most recent years, the Earth has hit record breaking temperatures as a direct result of human activities. We as humans forget that we are animals too, sharing the planet with other species—if we do not learn how to adjust our lifestyle for the greater good of the planet, there will cease to be one.

The Realities and Consequences of Climate Change. (2021, Oct 31). Retrieved from http://envrexperts.com/free-essays/essay-about-realities-and-consequences-climate-change 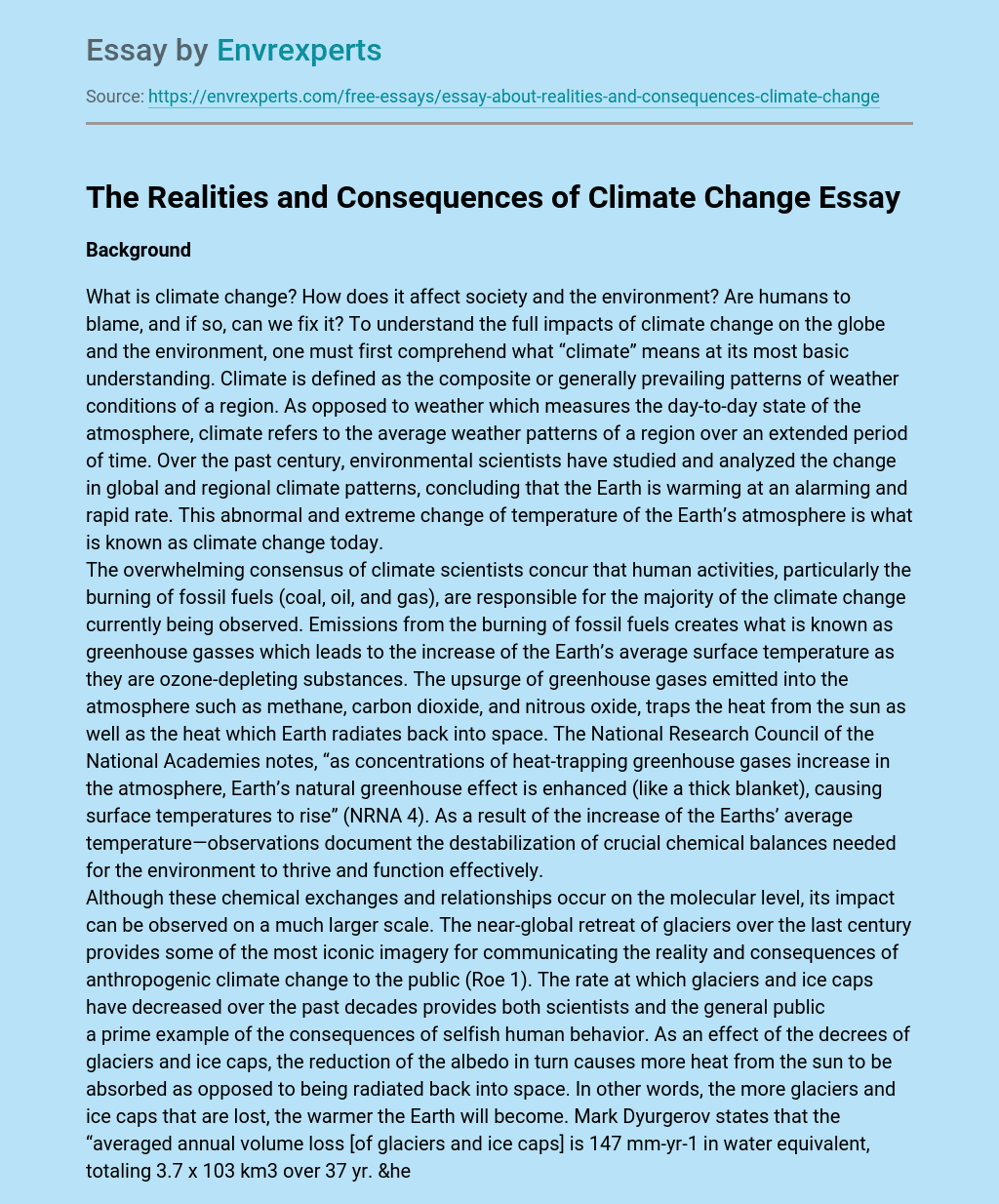