Reasons of Youth Suicide in Asia

More than 60% of world suicides occur in Asian countries but there is a great incompatibility between the scale of the problem and the resources and informations available to tackle it. CITATION Vij09 \l 1033 (Kumar 2009) However, many Asian people are living unaware of the risking suicides facts that are getting greater time by time and suicide prevention efforts have been limited in Asian countries by many factors though it is the leading cause of death for young people in many Asian countries CITATION Wor08 \l 1033 (Organization 2008) Interestingly, concerning with the mental problems, the factors that lead people to commit suicide in Asian countries is a little bit different from those in Western countries that is the social factors play a more important role than psychological factors.

Don’t waste time
Get a verified writer to help you with Reasons of Youth Suicide in Asia
Hire writer
$35.80 for a 2-page paper

CITATION Yin11 \l 1033 (Ying-Yeh Chen 2011) The relating articles, data and statistics such as reported suicide rates from seven Asian countries; South Korea, Japan, Singapore, India, Bangladesh, Sri Lanka and Thailand were used. The results show that a lot of youths who committed suicide were suffering from the pressures of their parents (and siblings) in all situations such as schools, academic fields, looking for job opportunities and even in marriage and when they become married men or women.

According to a report of World Health Organization about global suicide rates, suicide in the world amounted to over 800,000 deaths representing 1.

5% of total mortality. CITATION Wor08 \l 1033 (Organization 2008) Moreover, globally, it is the third leading cause of death among 15-19-year-olds. CITATION Sui192 \l 1033 (Suicide 2019) In general, Asian countries have a higher elderly-to-general-population suicide ratios in comparison with the Western countries CITATION Yin11 \l 1033 (Ying-Yeh Chen 2011) However, according to the statistics, we can clearly see that the suicide rate of young Asian people is getting higher year by year in some countries such as South Korea and Japan. In South Korea, the suicide rate per 100,000 people between the age of 9 and 24 years stood at 7.7 in 2017 and suicide has been the No.1 cause of death for young Korean people since 2007 above the other causes such as traffic accident and cancer. CITATION Yon19 \l 1033 (Yonhap 2019) Other Asian countries such as India, Japan, Sri Lanka, Singapore are also being challenged by the increasing suicide rate among young people.
In spite of the increasing suicide rates, mental health and suicide prevention have received a very small attention in comparison with Western countries. CITATION Wor08 \l 1033 (Organization 2008) This paper is going to focus on the question: what factors lead young Asian people to take their own life? And the hypothesis is young Asian people commit suicide because of the “parental pressure”. Differing from the Western countries, Asians can never neglect their parents and family till the day they die. The next thing is the Asian parents always expect their children to be successful in life and put a lot of pressure on them (e.g. to always get the first prize in school, high salary and so on). CITATION You19 \l 1033 (Youth Suicide 2019) The purpose of this paper is for the Asian society to notice the risking suicide facts and to get awareness about what pressures and threats the teenagers and youths are going through in their life and to have more mercy on one another. The findings can help the society knowledge how their actions and their words can affect a youth’s life. The following sections; introduction or problem background, research question and hypothesis, review of the literature, research design and method and references will be involved in this paper.

Suicide does not have a unanimous definition. However, in the simplest way, it can be defined as the act of intentional self-inflicted death. CITATION SMM08 \l 1033 (SM Masango 2008) Suicidal feelings do come to everybody at least once in a life time, but there are people who are able to not take too much suicidal effects while others are not. CITATION Dia \l 1033 (Rodriguez n.d.) According to Scheidman, suicide is best understood as multidimensional malaise in a needful individual who defines an issue for which the suicide act is perceived as the best solution. CITATION Sad98 \l 1033 (BJ 1998) Suicide is a complex public health problem that is resulted from the interaction of psychological, social, biological and environmental factors. CITATION Wor08 \l 1033 (Organization 2008) Solomon Rataemane, an African psychologist, distinguished the terms as follows. First, suicide is the self-inflected death with evidence that the person intended to die. Second, suicide attempt is a self-injurious behavior with a non-fatal outcome. Third, suicide ideation is a collection of thoughts about killing himself or herself and they may vary in seriousness depending on the specificity of suicide plans and the degree of suicide intent. Fourth and final, suicidal behavior is an objective danger to life associated with a suicide method. Although there is no limit with regard to what kind of day a teen can have, a child’s individual response, feeling suicidal include huge changes in relationships, getting bullied because of body image, financial situation, world environment, serious climate change, job, school, university, and house. It also includes loss of self-esteem or personal expectations, or loss of employment and abuse in physical, emotional or psychological, sexual, social matters. Nowadays, a number of teenagers see suicide as an easy way to have a better life by leaving the world. CITATION Dia \l 1033 (Rodriguez n.d.)

Parental pressure is when a parent puts too much pressures on a child and to force them to get success in a lot of fields. Parents strive for their child to be the best in all fields such as sport, art, music, literature, school and socially but this is not possible. Most parents consider themselves as they are supporting the child but actually, they are pressuring. Parental and family pressures happen the most when there is a lack of power balancing in a relationship. CITATION Lin16 \l 1033 (lewis 2016) Parental pressure is something that parents always notice other parents doing and try to stop but they never really notice that they are also doing it. This oriented culture is often seen in Asian families. Asian parents pay too much attention on how much pride and money their children can bring home by studying at a famous university, getting a lot of incomes later on and even what kind of life partner their children chose. CITATION Jas18 \l 1033 (Hung 2018) Children are dealing with parent pressure in many different ways. Some can become over-achievers in everything they try regardless of what the activity is. Others can become anxious and afraid to make a mistake or fail whatever they do. Worst, children with pressure sometimes tend to get certain mental disorders like low self-esteem, self-harm, lack of sleep, depression, anxiety, a habit of cheating and substance abuse. CITATION Amy19 \l 1033 (Morin 2019)

For this research, a mixed method of qualitive and quantitative approach and a collection of secondary data is used. A big obstacle is that the required and exact data and facts are not available in countries such as Myanmar, Cambodia, Malaysia and the Philippines because suicide is a shameful act both for the committer and the remaining family members. And even when a person died because of suicide, they tend to report the other cause of death such as traffic accident. CITATION Wor08 \l 1033 (Organization 2008) Therefore, the process focuses only on the following seven countries; South Korea, Japan, Singapore, India, Sri Lanka, Bangladesh and Thailand. The data such as suicide rate is not reliable in India, Sri Lanka, Bangladesh and Thailand. And so, the quantitative approach can not be used in these countries. So, a process of case study is going through in these countries. The relating articles of each countries and the articles from suicide prevention organizations are reviewed to decide how the culture of parental pressure is strong in these countries. For South Korea, Japan and Singapore, where the data are reliable, the suicide rate and how many of the young people that committed suicide suffered from the pressure of their parents are calculated through the regression model. In the term “youth”, the age is limited from 15 to 35 as one of the Asian regional organizations, ASEAN (Association of Southeast Asia Nations) declared the age range of population categorized as youth are between 15-35 years. And the process focuses on the period of 2000 to 2018 because youth suicide rates are significantly increasing since 2000.

Reasons of Youth Suicide in Asia. (2021, Oct 31). Retrieved from http://envrexperts.com/free-essays/essay-about-reasons-youth-suicide-asia 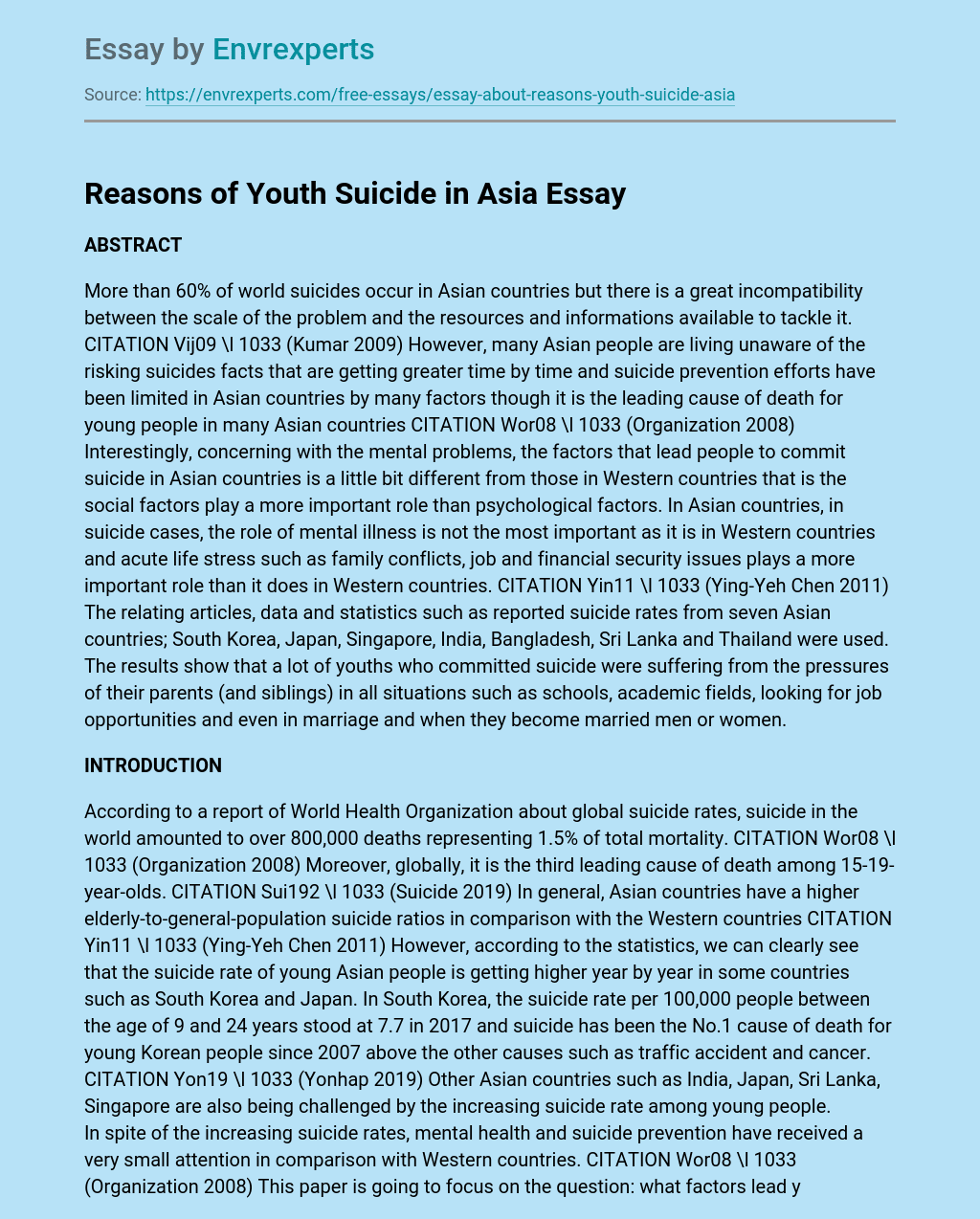