A Reflection of the Book Silent Spring by Rachel Carson

The book Silent Spring, written by Rachel Carson, is considered to be the forefront of the modern day environmentalist movement. In the book, she highlights the many interactions between humans and the outside, natural world, and describes the consequences of these interactions. On page 51, she explains that "in nature, nothing exists alone.” This in and of itself describes her view of ecology. It reminds me of Newton's Third Law, where "every action has an equal and opposite reaction”.

Don’t waste time
Get a verified writer to help you with A Reflection of the Book Silent Spring by Rachel Carson
Hire writer
$35.80 for a 2-page paper

For example, in chapter 3, she explains how water is contaminated by chemicals released by humans. This water, in turn, goes into the animals that not only live in it, but the ones that drink it as well. This causes damage to that animal, as well as the parasites and other predatory animals that feed on it. If said animal is up for human consumption, the chemical comes right back to where it came from, as it enters the human system and causes damage there.

So, it starts out only in the water, but is spread like wildfire through organisms. This is Carson's definition of “ecology": no harmful interaction with nature will be contained where it starts.

One core value Carson places on nature is that of anti-profitability. On page 23, she says “It is also an era dominated by industry, in which the right to make a dollar at whatever cost is seldom challenged”. She is challenging the industries who seek to make a profit, even at the extreme extent of sustainable human life.

The values should be reversed, whereas companies can make a profit while being life-conscious. Another value she explains is the lack of common sense. Specifically, on page 54 she says “it is an extraordinary fact that the deliberate introduction of poisons into a reservoir is becoming a fairly common practice”. Throughout the book, she expresses her amazement to the lack of logic behind these actions. A question she has: if we know the effects, why do we continue the practice? These arguments are definitely persuasive, as they smack the reader right in the face. She questions the logic of modern science, and that wakes many up to the problems at hand, as most people at the time trusted everything the scientists were telling them.

Carson is critiquing the chemical companies, mainly. She speaks of their greed and inhumanities throughout. She recognizes that they put profit above the health of the common people. Not only this, but she critiques the scientists who allow this to happen as well. Then, at the very base of it, she critiques the government for sweeping these issues under the rug and not providing proper legislation to mitigate these issues. She critiques the chemicals themselves as well as the technology for not being environmentally conscious, and calls out those responsible.

I think Carson relies on science as well as moral arguments to support her points. She uses science, for example, to explain the direct health effects DDT has on the human body. Another example is when she discusses aerial spraying, and the adverse effects on the environment there. From those scientific arguments, she turns her points toward morality. She questions why we do not put the planet we live on as the priority, because it is our only shot at life. This tugs at people's moral strings, and attempts to pull them toward an environmental and longevity perspective rather than how to make a quick buck. Not only this, but she makes the reader feel for the animals subject to the human abuse. This tactic begins right at chapter 1, when she describes the town with the spring. After being subject to chemical spraying, the rhetoric turns dismal and describes a skeleton of the town that it once was. This struck home for me how dangerous all of these technologies were becoming, and it set the moral tone for the rest of the book.

A stance on technology is never taken, although it is mentioned within the book. Carson argues that humans should not use chemistry to tamper with the natural world. She believed technological advances could easily disrupt the systems of the planet. She questioned the direction of technology down a wrong path. Once again, it worried her that the technology would be put into priority, rather than conservation.

I think Silent Spring was the forefront of the movement against industrialized agribusiness, however it is still commonly practiced today. The chemicals used today are “less” dangerous than they once were, but still cause harmful effects to the whole environment. I also think the creation of the Environmental Protection Agency was a big help to mitigate these problems and regulate the chemical industry, but it is a slow process. Not only that, but the agency "grandfathered” in the old chemicals that would now be illegal if invented today, to allow their continued usage, although limited. I think as the news of GMOs and CAFOs spreads like wildfire through modern media, people are fighting back strong once again, although the government still seems to be as slow moving as it was in the 1960s. The reliance on profit-only industry is still prevalent, and does not seem like it is going away anytime soon. This is demotivating politicians from making change. However, this is what must change.

A Reflection of the Book Silent Spring by Rachel Carson. (2021, Oct 31). Retrieved from http://envrexperts.com/free-essays/essay-about-reflection-book-silent-spring-rachel-carson 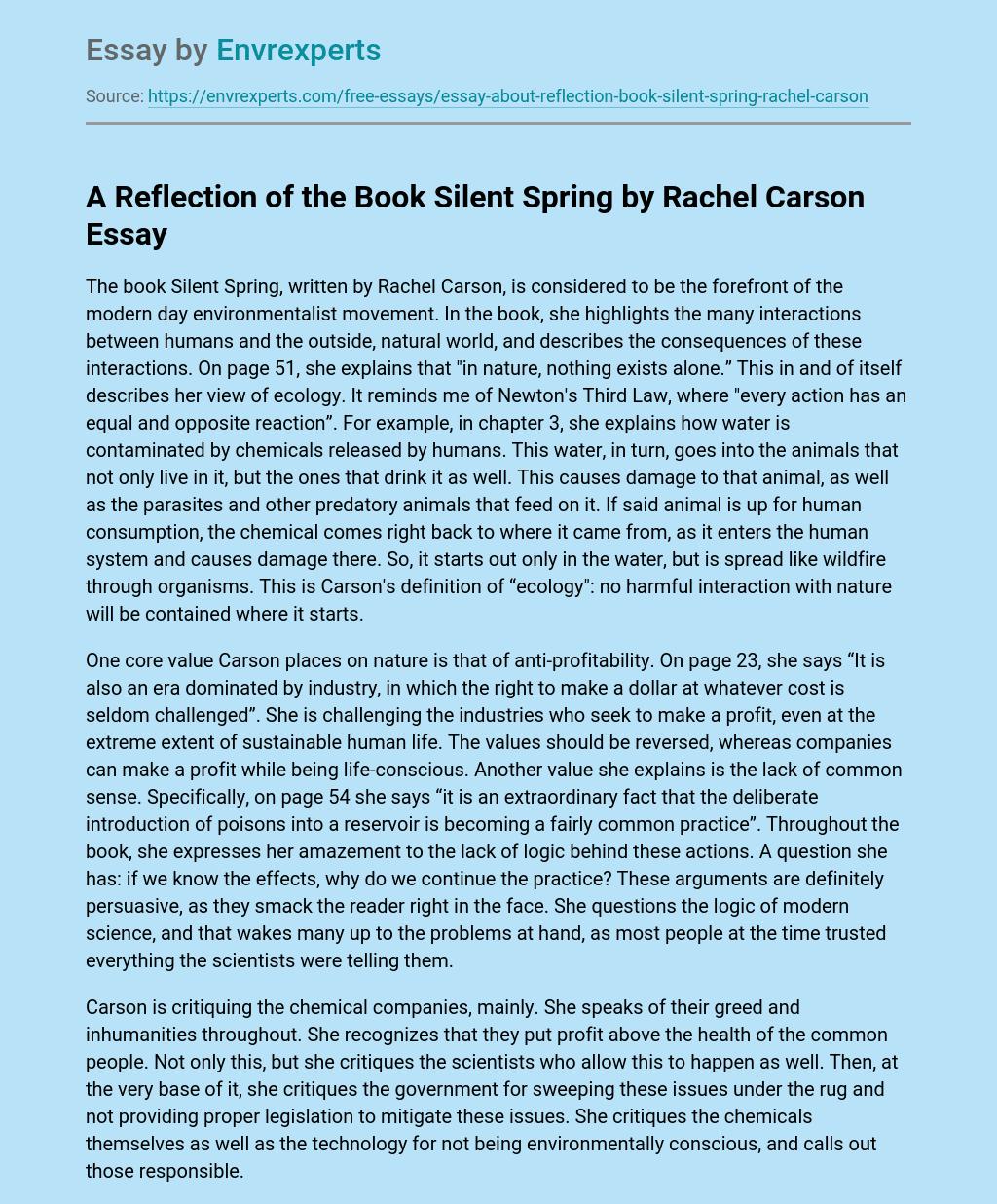