Reign of Recycling is an article written by John Tierney for the New York Times. Within this article he expresses his feelings about how recycling in the United States is no longer useful and the only reason people still participate is because they feel self-righteous by doing so. He offers an approach to how we should handle recycling in the United States and proposes a plan to essentially outlaw recycling as a whole. His main premise is that as a nation we should simply stop recycling and just build landfills to fill with all of our trash.

Don’t waste time
Get a verified writer to help you with Reign Of Recycling
Hire writer
$35.80 for a 2-page paper

Tierney selectively and dishonestly presents evidence to argue that mandatory recycling programs cost more than they are worth; he believes that we are doing more harm than good on many levels by participating in recycling programs. Tierney's analysis has many questionable judgements and is not the way we should look at recycling.

A flawed idea within Tierney's article is that he claims compiling all of our trash into landfills is a viable solution for fixing the United States' recycling problems.

His claim that our trash production is minuscule in the grand scheme of things is moot because when you break it down, it is not the amount of trash that has an impact but the type of trash. Tierney writes “I found that all the trash generated by Americans for the next 1,000 years would fit on one-tenth of 1 percent of the land available for grazing. And that tiny amount of land wouldn't be lost forever, because landfills are typically covered with grass and converted to parkland, like the Freshkills Park being created on Staten Island” (Tierney 3).

Tierney's argument is weak because if we permanently halted recycling and threw all of our trash out together into one giant hole covering it with grass in order to convert it into a park wouldn't be so simple. Plastic and other recyclables take hundreds of years to fully decompose and when they do there are high risks of harsh chemicals leaking into the surrounding soil (Post Consumers). That doesn't seem like a place many people would want to live or have their kids playing on. There may be a better option that we can look at. A valuable recommendation might be to regulate what we manufacture so that recycling isn't as much of a hassle and doesn't cost as much. Although they last for a very long time and are cheap to make, plastic products are not as feasible and cannot be recycled or broken down as easily as other recyclable items like glass. We should slow down or lessen the production of these products.

Tierney fails to mention that mining, drilling and logging are very polluting industries; living next to one of these businesses might not be the best option. If people care about clean air and water, then we should be lowering our carbon footprint and trying to prevent pollution from continuing right in-front of us. Adam Minter author of Junkyard Planet states, "the worst recycling is better than the best mining" (Junkyard Planet). Tierney is so focused on his claims that recycling is doing more harm than good that he is neglecting other issues more prevalent in regards to pollution. Mining and drilling have always been major concerns because of the damage that can be done through these methods.

According to the Environmental Protection Agency, "Throughout the western United States there are thousands of miles of mining impacted streams and rivers caused by active and historic mining of metallic ores (e.g., iron, copper, lead, zinc, molybdenum, tungsten) and precious metals (gold, platinum, and silver)” (US Environmental Protection Agency). Recycling has a solid impact on the world we live in today, even though it may cost more than it earns. We should stop worrying about materialistic things and start worrying about the environment. Tierney does not advocate such acts with his ideas of massive landfills around the country.

Tierney clearly does not have all his facts straight and yet again makes an urge that is not entirely true in saying recycling is no longer cost effective. He also claims, "cities have been burying garbage for thousands of years, and it's still the easiest and cheapest solution for trash” (Tierney 6). This is not true and contradictory to Tierney's statement. In the U.S., paper makes up the largest percentage of the municipal solid waste stream -27%- according to 2013 figures.
Various types, including cardboard, have strong markets that are extremely cost effective comparative to landfilling; if you decide to landfill your entire waste stream, you will be burying a lot of recyclable commodity that has value, not only to the environment, but also to the economy. While composting is not very cost effective right now in New York City because of space constraints and a lack of nearby processing facilities, it is thriving in places like San Francisco, where compost from mandatory organics recycling end up back in gardens, landscapes, and even fertilizing vineyards in Napa and Sonoma. Plastic recycling is currently more cost effective in India and China than in the U.S. When the price of oil rises — and it will — the demand for recycled materials like plastics will increase (The Unbearable Inevitability of Recycling). After looking over the evidence it is clear that recycling still holds true to its value and Tierney is not one-hundred percent correct. Though not all aspects of recycling produce positive revenue, as a whole it is still more cost-effective than massive landfills.
Tierney claims that composting facilities have many negatives, but the environmental bonuses outweigh the slim chances of there being issues. Although biodegradable materials may begin to smell, and seem unclean, they have many environmental benefits. Biodegradable materials consist of many things that can be placed into a compost. Tierney tries to negate the benefits of these facilities within his article but does not put forth solid information to back up his claims. He states, “Composting facilities around the country have inspired complaints about nauseating odors, swarming rats, and defecating sea gulls. After New York City started sending food waste to be composted in Delaware, the unhappy neighbors of the composting plant successfully campaigned to shut it down last year” (Tierney 4). If you read over that statement you can see that he begins by saying composting facilities, but then continues on to say food waste. This is simply because Tierney is not properly portraying food composting facilities.

Chaz Miller supports these ideas by stating “Composting facilities can just be yard waste; Have yard waste facilities gotten 'complaints about nauseating odors, swarming rats, and defecating sea gulls?' I doubt it.” (Miller). Issues may occur in some places, but it certainly does not apply to all, most of it comes down to proper management and a small portion to where the facility is located. Criticizing an environmental solution for its imperfections instead of comparing it to the real-world alternative is just an easy way for Tierney to undermine the benefits of compost facilities so that landfills look more appealing.
Tierney did make valuable points within his article, but there were also some outstanding flaws. It is simply not feasible for a large city like New York to change from recycling to landfills. There is no room for them, they cannot be turned into useful land as soon as projected, and it is environmentally unsound. Switching from recycling to landfills in a city area would do more harm than good. It would create areas that have liabilities and prevent the city from making use of those areas turned into landfills in the future. Tierney's arguments and attempts to undermine the recycling industry along with his solutions as to where we should go with it seemed rather lazy. The recycling industry needs to stay, but regulations should be placed on it and we should begin to regulate the things we manufacture, because they play a large role in the effects of recycling. 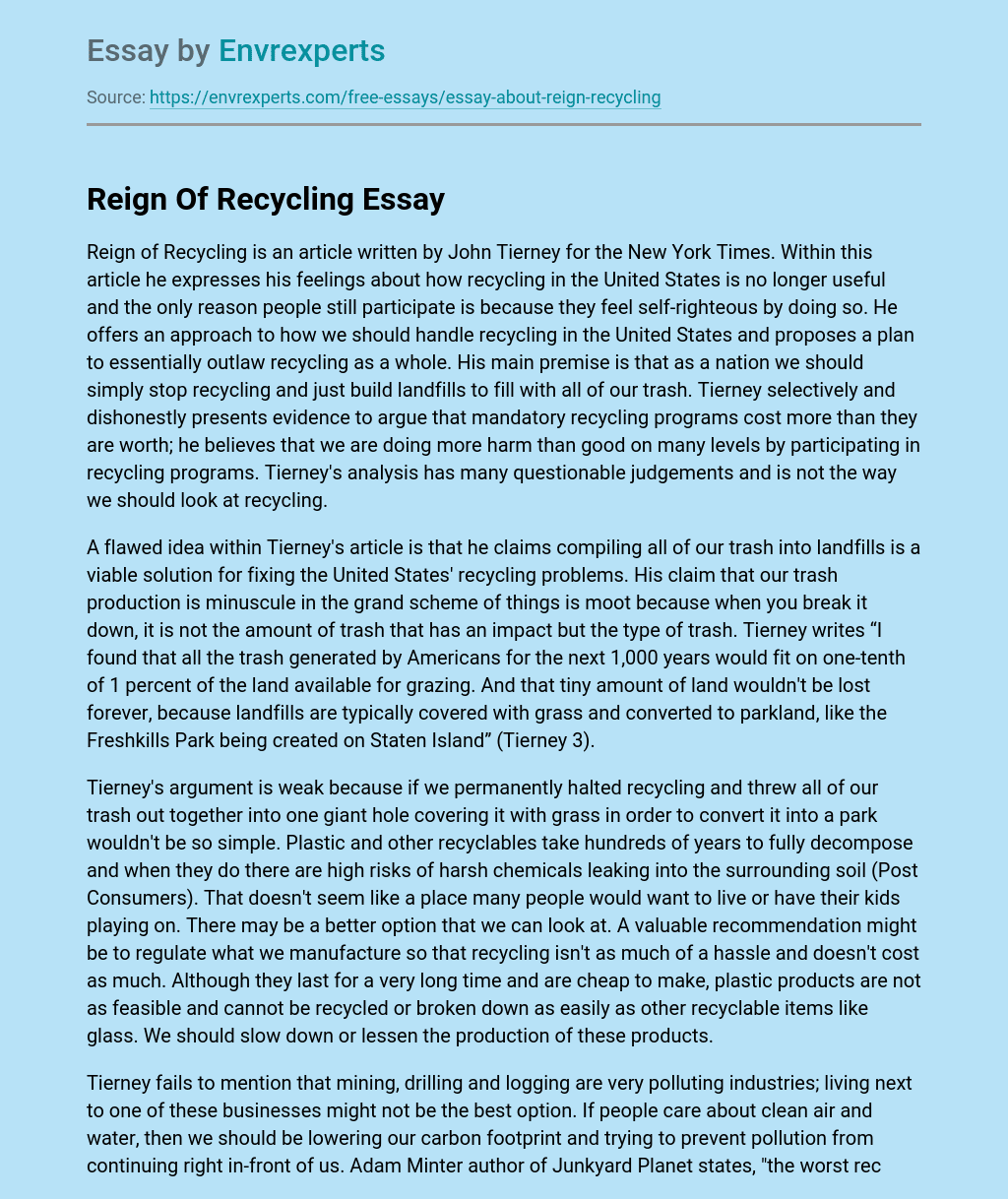