Removing Carbon Dioxide From the Atmosphere

Don’t waste time
Get a verified writer to help you with Removing Carbon Dioxide From the Atmosphere
Hire writer
$35.80 for a 2-page paper

From atmosphere carbon is added to plants by photosynthesis, stored as biomass as well as in soils.

If microbial decomposition of the carbon is low then carbon stored in soil increases.so carbon sequestration is also defined as the ‘’It is process of CO2 removal from atmosphere and stored organic matter so carbondioxide of atmosphere reduced.’’

In this way carbondioxide from atmosphere is reduced.In absence of oxygen biochar is produced at very high temperature when organic matter is burned.In present timnes much importance is given to the methods that are using biochar as a source of carbon sequester.

carbon about 70 to 80 pc of biochar form. About 60 pc of biochar organic carbon is of high stability. Persistence of biochar carbon in soil: How long the carbon persist in the soil following applications as biochar contain large amount of carbon.

The characteristics of biochar interact with the climate conditions to influence the time, how long biochar carbon remains stored in the soil. For the more recalcitrant biochar shorter and higher pyrolysis temperature are required. These pyrolysis conditions produce less biochar per unit feedstock. Soil texture play key role in determining the persistence of biochar carbon. By this interaction with the soil particles biochar became very stabilized. Clay particles stabilized more the biochar as compare to silt and sand. By this biochar application the rate of decomposition is increased. This is called ‘’priming effect’’.

Pile up woody debris in a shallow pit in a garden bed, burn the brush until the smoke thins, damp down the fire with 1 inch soil covering. Let the brush smolder until it is charred. Put the fire out. \n Converting Human Waste to BioChar on a Community Scale Biochar can be made from agricultural waste and/or human waste. Since 2011, the Climate Foundation has developed biochar reactors for human solid waste (HSW) applications. The reactors were designed in the United States and built simultaneously in Connecticut and India. Working independently of the grid, they can process the solid waste of 2,000 people per day or up to 800 kg.

Whales are very important or much better than planting trees,if compared more best is whale for its benefits.Whales capture carbon in animal world,absorb 33Tn of CO2 throughout lives.Along binding large CO2 they also contribute to Earth oxygen by producing phytoplankton 50pc of oxygen. Whales are important to ocean carbon absorption.Whales decrease and greenhouse gases in atmosphere increase.Whales could play a role in helping the islands to meet the reductions to productivity.

The main saying is Whale eat carbon not fish means it have a very important role in carbon sequestration.In ocean at depth the carbon concentration is very high.There are two ways in which Whales absorb CO2 in ocean.Their motion causes them to push nutrients from bottom of the ocean to surfaces,they feed on marine flora and phytoplankton and also eat small fishes and animals.

In warmer season Whale not survive.It is not predicted yet that how the climate change is affecting the species of Whales. Climate changes or threats along with human activities overfishing,extreme conditions drive more Whale out of water around island.Temperature and ocean acidification affect the distribution of Whale.

Whale arte mobile if their prey move they also move along the prey,so move to a different area in which different other spacies are present and they are using the same area and competition is increased. Shifting weather affect human activities and climate pressure is put on human for food from ocean,ship traffic increase if ice start melting causing more pollution.The changes creating a cycle where hitting water affecti8ng Whale and in return carbon increase in ocean which cause more temperature.

Scientists made progress how much carbon Whales take from the atmosphere,each year 894 acres of U.Sforest do sequester carbon.In Hawii 80 Whale motion like swimming cause 208 acres of United States equilant carbon was absorbed.But there’s still a huge degree of uncertainty here.Cultural and economic concerns are also acossiated with the change in Whale species between the year 1998 to 2005 45pc Whale watching sector increase. In 2005,ranked 21 billion in local economic benefits.

Whale Is Worth of Thousands of Trees

Protecting Whales to Protect Our Plant

Protection of Whale is necessary for human good. “The deep ocean stores a lot of carbon, so it’s worth looking at the contribution of animals and help in conservation efforts,” she added. Whales facilitate carbon absorption in two ways. On the one hand, their movements — especially when diving — tend to push nutrients from the bottom of the ocean to the surface, where they feed the phytoplankton and other marine flora that suck in carbon, as well as fish and other smaller animals.

The other, explained Natalie Barefoot, executive director of Cet Law and co-author of the report, is by producing fecal plumes. “In other words, pooing,” she said. “That also introduces nutrients that create marine plants in the area. These plants use photosynthesis, which absorbs carbon, thus enhancing the carbon capture process.” But as waters steadily grow warmer, whales may not be able to survive in the region. It’s difficult to predict just how climate change will affect the species, said Barefoot, because they’re part of a complicated ecosystem with many interlinked species.

In shallow estuarine system,ecological and bioengineered reef system is useful for reducing erosion.Reduction in the energy of wave,product of more food and increasing habitates for living combined with the solar energy.Use of biological organisms complexes algae and oyster for sequestration of carbon is a solar is a solar energy solution and it is sustainable for carbon capture and storage to reduce the risks of climate change.

The solution of ocean acidification is also the removal of more carbon from ocean.Oyster and animals are producer of carbondioxide.If oyster combined with algae can perform carbon sequestration.A system designed to check the algal and oyster growth in closed system.The parameters include carbondioxide and oxygen in air and water, wet and dry biomass PH and algal concentration.Recent moderate sized projects are monitored to check results on large area. The research that shell fish find trouble to make shells in high carbondioxide concentration.

Shell fish is also involved in carbon sequestration. cphytoplankton bloom over the Kerguelen plateau in the Southern Ocean was sustained by the supply of iron and major nutrients to surface waters from iron-rich deep water below. The efficiency of fertilization, defined as the ratio of the carbon export to the amount of iron supplied, was at least ten times higher than previous estimates from short-term blooms induced by iron-addition experiments.

This result sheds new light on the effect of long-term fertilization by iron and macronutrients on carbon sequestration, suggesting that changes in iron supply from below—as invoked in some palaeoclimatic9,10 and future climate change scenarios11—may have a more significant effect on atmospheric carbon dioxide concentrations than previously thought.

Removing Carbon Dioxide From the Atmosphere. (2021, Oct 31). Retrieved from http://envrexperts.com/free-essays/essay-about-removing-carbon-dioxide-atmosphere 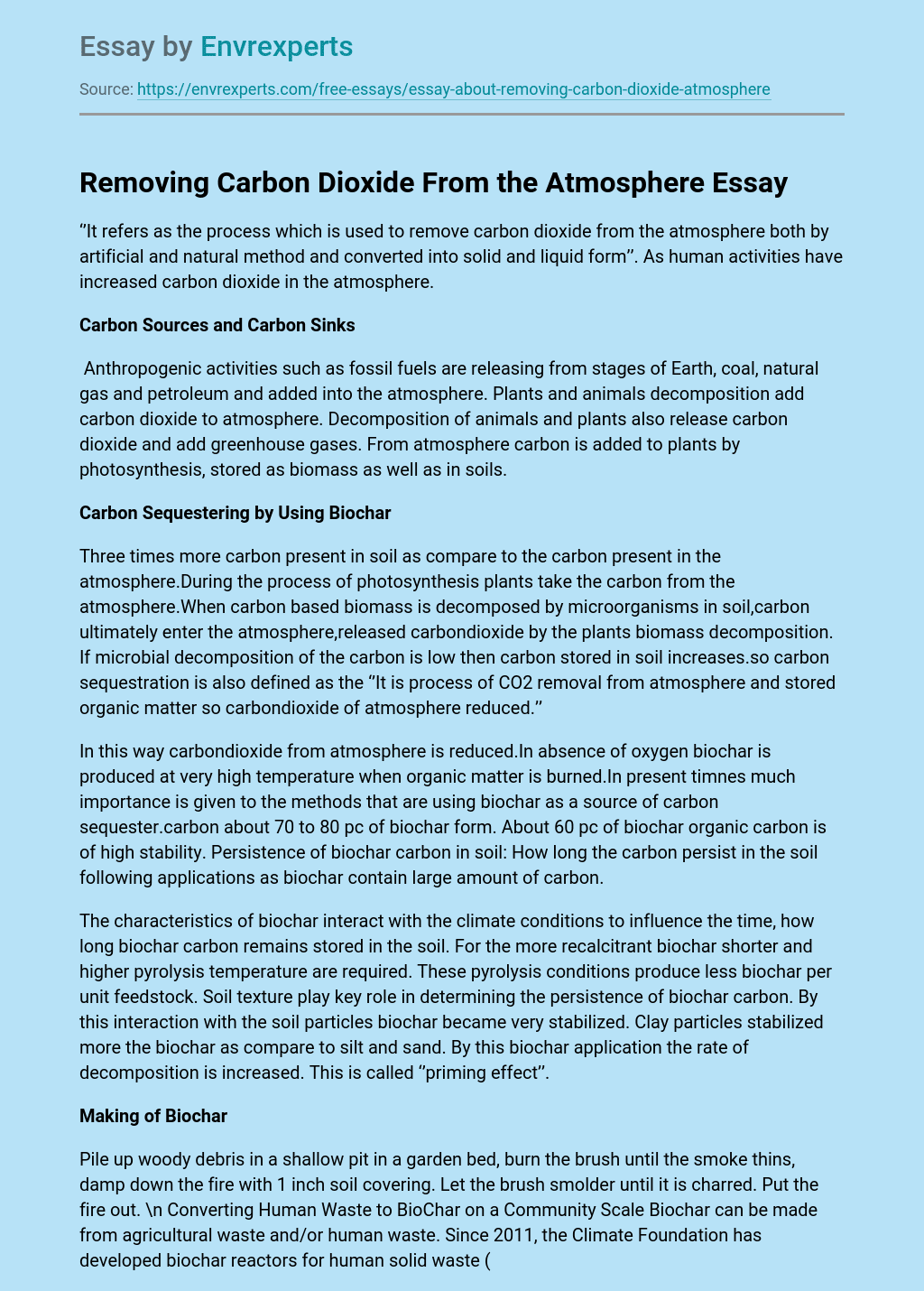