Renewable energy is part of the vast Global energy system; the consumption of the renewable energy is going to increase significantly in the coming decades. However, geopolitics of renewable energy are expected to be less influential than in the fossil-fuel era; many believe that alternative technologies like wind and solar electricity, will lower the geopolitical power of traditional energy producers, because low-carbon alternative will provide diversification and increased energy security, especially to those countries that are heavily depended on fossil-fuel imports.

Don’t waste time
Get a verified writer to help you with Renewable energy and Climate Change
Hire writer
$35.80 for a 2-page paper

But the question is; Does the geopolitical role of renewable energy will be less influential and plays minor role compared to the geopolitics at the fossil-fuel era? Well, there are many predictions that were being assumed and studied by many companies, leads to different scenarios for the near future, these scenarios of the high levels of renewable energy discuss the geopolitical consequences based on many factors such as access to technology, electric power lines, rare earth materials, climate change, patents, storage, and the unpredictable government policies.

This paper will discuss some of these factors that leads to different geopolitical consequences. The rise of renewable energy may affect some countries, particularly those which relied heavily on oil and gas export, on one hand these countries might face political instability and lose their access to the high rent, unless they make some adjustments on their policies toward the dependency of oil and Gas. On the other hand, countries formerly dependent on imported fossil fuels could see this as reduction of this burden and a consequent augmentation in domestic and international political power.

Rare earth elements are used for renewable and clean energy technologies, although rare elements are found in some countries, they are usually found in dilute concentrations and are often difficult to extract. however, these countries might have resource curse in the production and sale of these elements, on the other hand, as demand for renewable energy technologies and the demand of these elements continues to increase, countries may be inclined to hold rare earth elements in reserve for themselves and compete over these resources. For example, the U.S defense industry makes up a small portion of the total demand for rare earth elements, and the major supply comes from China, but to insure alternative supply, the U.S. will likely need to proactively intervene in the market to shift production dependence away from China. Electric Grids, grater electric interconnection could increase interdependence among nation which should logically be reduced geopolitical competition over fossil fuel resource.

On the other hand, cross-border trade electricity could create geopolitical tensions in which countries may be able to use energy as a weapon, for example by shutting off its supply to other countries.\nInvestment and technology may increasingly become a source of cooperation or a node of geopolitical rivalry. First, increased tensions between developing and developed countries over the transfer of technology: As Criekemans indicates, “from an external-geopolitical perspective, those countries that today invest in renewable energy sources and technology may become the dominant geopolitical players tomorrow.” if countries choose to view technologies as geopolitical rather than economic or environmental assets, it should also be considered how companies who often own the technology might try to incentivize countries to cooperate when these countries may have little interest in doing so. In reality, the distinction between economic, environmental and geopolitical dimensions is of course much more blurred. Yet, it is important to keep these countervailing interests in mind when trying to understand why there is tension between developing and developed countries when it comes to the sharing of renewable energy technology or why certain countries have taken particular positions. For example, of where economic reasons coupled with geopolitical considerations have trumped environmental objectives is the EU’s anti-dumping and anti-subsidy duties on imports of solar cells and solar panels from China.

Climate change is one of the factors that should take it in consideration, recently it has been concerned that climate change will lead to the scarcity of resources such as food insecurity, clean water and natural disaster this drives to increase the cross-border migration, in which all these factors might lead to political instability and even state failure. However, the renewable energy in somehow helps to avoid the climate change and the consequences of it.

There is no question that the balance of power in energy geopolitics is shifting from fossil-fuel owners to countries that are developing low-carbon solutions. But to predict geopolitical consequences is very difficult, because there are many elements to consider, IRENA- International Renewable Energy Agency convened, “the renewable revolution brings energy independence to countries around the world. A fascinating geopolitical future is in store for countries in Asia, Africa, Europe and the Americas. The transformation of energy brings big power shifts.” The global energy transformation presents both opportunities and challenges, Adnan Z. Amin, Director-General of IRENA, says: “The benefits will outweigh the challenges, but only if the right policies and strategies are in place. It is imperative for leaders and policy makers to anticipate these changes, and be able to manage and navigate the new geopolitical environment.” The rise of renewable energy may also create new centers of geopolitical power. In all probability, the geopolitics of conventional energy and that of renewable energy will exist next to each other for a period of several decades. Decision makers will have to be creative in trying to cancel out the drawbacks of one source of energy with the advantages of the other. In that sense, the geopolitics of energy will become more complex, and will have to deal with a variety of issues in foreign policy, diplomacy and international security. The potential geopolitical implications of a renewable energy based system depend greatly on which scenario materializes in a possible future. 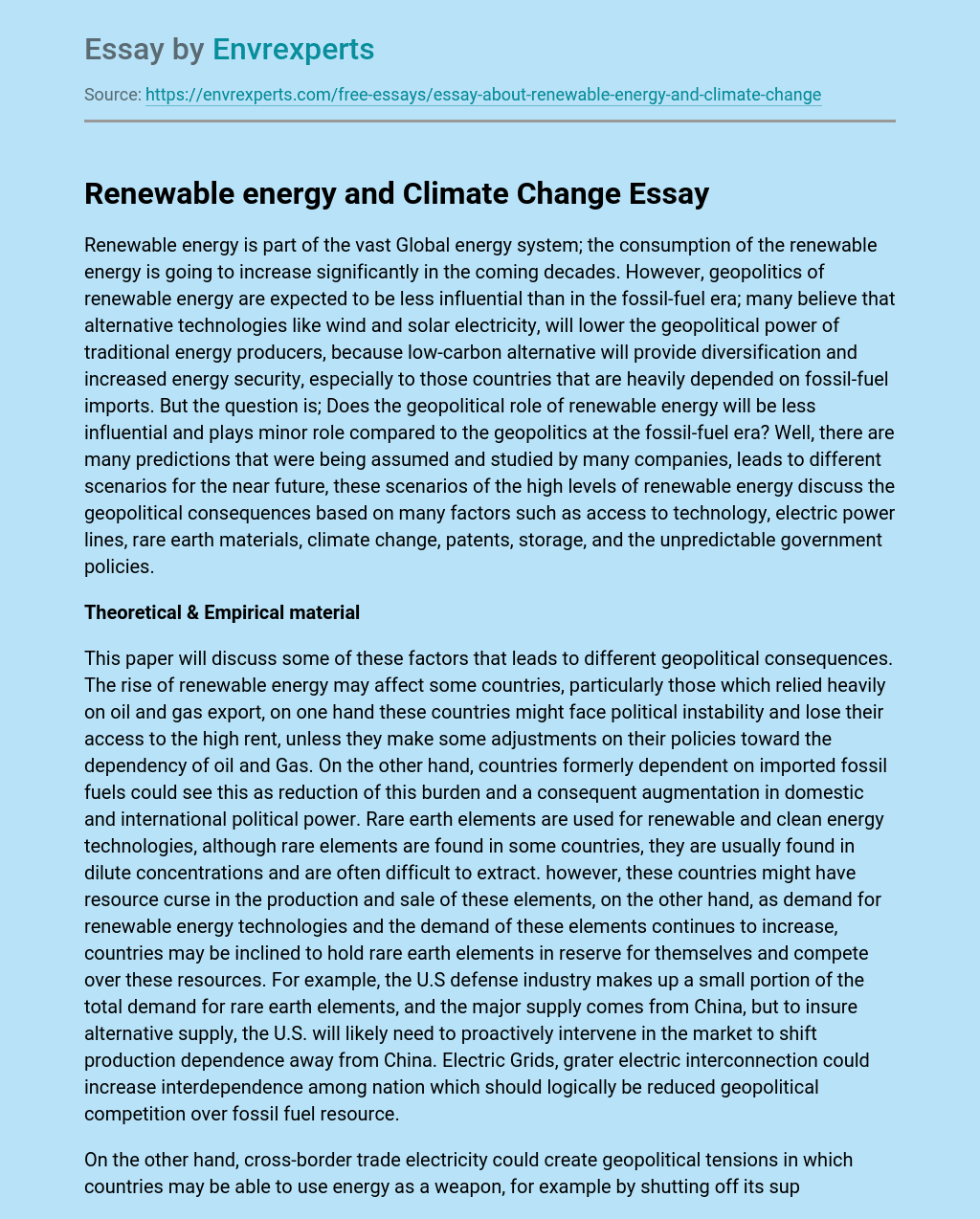