Renewable Fuel Biofuels and the Issues of Pollution on our Ecosystem

Nowadays, industry is developing more than ever before and this has a major influence on pollution of our planet. The amount of gas that factories release into the air on a daily basis is enormous. Also, vehicles represent a big factor of pollution of cities ecosystem. For example, people who live in Beijing wear masks all day to try to reduce the amount of pollution that gets into their organism. This should create a big concern for what can happen in ten, twenty, or fifty years.

Don’t waste time
Get a verified writer to help you with Renewable Fuel Biofuels and the Issues of Pollution on our Ecosystem
Hire writer
$35.80 for a 2-page paper

If we do not change the way we produce things and the source of energy for cars, the world would be very polluted and there is a risk that people would have to move from big cities because of inhalation problems caused by polluted air. People who live, for an example, in New York do not have to be experts to notice that their city ‘stink’. The best way for resolving this problem would be to replace cars which use gasoline, with hybrid cars and cars which use biofuel.

China is trying to reduce the pollution in big cities by gradually switching to cleaner fuels, which will help in reducing the carbon emissions (Jennifer Weeks, par. 19). There are a lot of renewable sources of energy that could be used much more than they are at this moment. Wind, Sun, and water have a great energy potential inside and they should represent a major source of energy in the future.

History of Renewable Sources of Energy

Although there were some ideas long ago that fossil fuels should be replaced because of its negative effects on natural surroundings, technology was not on a required level to provide an alternative. Finally, the 80's and 90's provided some helpful inventions, and this period can be marked as an early, experimental period for renewable resources. It provided the future directions which scientists should follow in order to create greener future (William Sweet, page 35). The beginning of the 21" century brought government regulations and bigger public support for renewable resources and its progression. Experimental zone is the past, new progression phase arrived. Today, the usage of renewable sources of energy is so developed that it has potential to replace traditional way of hot water heating, electricity generation, and motor fuel usage.

Today, traditional sources produce the most of the energy of all of the energy resources used around the globe. Coal, natural gas, propane, and fossil fuels are considered to be these traditional sources of energy. Also, nuclear energy is another source of energy and it is extremely developed in the past few decades. It is common for all of these sources of energy is that they are nonrenewable, there is limited amount of these resources. In other words, the supply of these products is limited which means that in some point in future, there will be no more of these resources available for use and production. However, these resources still exist and people are not forced to change the way of producing things immediately, but knowing the fact that there will be a point of time in the future when these resources will disappear, people are somehow forced tothink ahead of time and prepare for expected outcome. Moreover, all of these sources of energy during the process of creating the final product, create either air, water or land pollution. Out all of these nonrenewable resources, coal and oil are especially harmful. Coal factories are producing sulfur dioxide which pollutes air and causes acid rain as a side effect. Gasoline emits carbon dioxide as an air pollutant which causes global warming (Mary Cooper, par. 24). Firstly, air is intensely polluted in the city areas all around the world. This pollution is mostly created by cars which use fossil materials as a fuel, also known as gasoline. Petroleum is a fossil material that can be found beneath the Earth's surface and it is refined into different types of fuels, one of them being gasoline, or simply gas. As it is mentioned before, the supply of gasoline is limited and this is another reason for concern. Also, more and more space is being occupied by the machines required for extracting petroleum liquid from the Earth's mass. This creates the pollution of the Earth's surface, the area which is poisoning and polluting the land around. Moreover, people are often using rivers as garbage cans. Besides the fact that this act is polluting the rivers, people are the main losers in this action. Rivers cannot be used anymore as a resource of drinking water and this causes the direct damage to the creator of the problem – people. Also, there are a lot of other materials that are causing the same negative effects, like coal and natural gas. The supply of these resources is also limited and they can be replaced by renewable energy resources that do not create any negative effects to natural surroundings.

To start, let say that renewable energy is energy derived from natural resources which can be replenished constantly. These resources are sunlight, wind, water, biomass, and geothermal sources. They can be used as a primary resource to generate electricity, power vehicles, provide heating and cooling services. All of these resources are being replenished continuously, and even more importantly, they do not cause almost any negative effects to the natural surroundings. These two reasons combined, provide the enough amount of needed information to directly switch to this type of generating energy without any additional background knowledge. It cannot be much better than knowing for sure that you have energy that is renewable and does not affect neither the nature, nor people habitat. However, the transition period will be long because the whole system has to be changed which is not an easy task. Although lithium is nonrenewable resource, for the purpose of this essay I decided to put it into the group of renewable resources because of his neutral effects to natural surroundings. As Jennifer Weeks noticed, "Now manufacturers are introducing plug-in hybrids, which refuel at recharging stations, and battery-operated electric vehicles that operate entirely on battery power” (par. 17). Lithium can be used as a heart of batteries production for the purpose of creating electrical vehicles as a future goal. This is much better choice than to stay on the course of making vehicles which use fossil fuels. The reason is not that fossil fuels are nonrenewable resource of energy, because lithium is also nonrenewable source of energy. The reason is that fossil fuels and its consummation as a gasoline have many negative effects on the world nature and people habitat, while lithium batteries have none. However, it cannot be disregarded the fact that production of electrical vehicles will be limited and therefore, it can be suggested the production of both electrical vehicles and vehicles which use biomass fuel as a renewable source of energy.

Nowadays, around 10%-20% of global energy comes from renewable resources and this number is expected to grow further in the upcoming years and decades. In the United States of America, that number is a little bit smaller. This picture is from the year of 2009 and since then the usage of renewable sources rose for approximately 1%-3%. If the discussion is about renewable resources in the USA, the biggest share has biomass energy (53%), followed by hydroelectric energy (31%), wind (11%), geothermal (3%), solar (1%), and other (1%). Globally, the biggest contribution among renewable resources is coming from biomass, which is already started with replacing fossil fuels in many different areas. It is expected that biomass fuel totally replace traditional fossil fuel in less than fifty years. Wind power has significant annual growth rate and its biggest increase is remarked in the United States, Europe, and Asia. Also, solar thermal energy rose its presence as a source of energy in the previous several years. China is the world leader with of share of world solar energy. Iceland seems to have the best program of translating its electrical system towards renewable resources, and now that small Scandinavian country is providing 100% of renewable electricity power for its households. Interesting thing is coming from Brazil, where ethanol is a significant source of energy for vehicles, as a biomass fuel. It is expected that until the year of 2030, all the worldwide energy comes from renewable resources. Also, it is expected that around 50% of that energy comes from Sun and solar panels, while other 50% will be fulfilled by wind, biomass, and hydropower energy. However, these are just predictions, and no one knows for sure if they will be met and how accurate they are, but if this percent of growth continues with its trend, these predictions seems to be realistic.

Firstly, the transition period between fossil fuels and renewable sources of energy is long and “painful'. It takes time to introduce and implement the whole new system which is started as a scratch several decades ago. People are still sceptice about this whole idea of renewable energy and they have fear that this process is too long and expensive, so therefore it is not worth of effort. Just the fact that this whole process cannot be done overnight, brings the idea of distrust and skepticism. Moreover, some people think there is no need for change and that the current system is good. They all need effective education which will provide them facts about the whole process of transition and implementation period, for the purpose of reducing and eliminating the present skepticism about 'green' energy. It has to be noticed that traditional fuel sources will be needed to satisfy the demand during the bridge period'. Although they constantly create pollution, world cannot stay without energy during the transition process. Secondly, this process requires government effort of every single country in the world. It sounds as an easy idea, but there are a lot of countries which presidents and people of influence do not want to change their system. These countries have either economical profit based on nonrenewable fuels or their political perspective supports this kind of system. First group of countries are the main exporters of fossil fuels like Saudi Arabia, United Arab Emirates, Kuwait, Oman, Yemen, Nigeria, Iraq, etc. Second group of countries is represented by Russia, Iran, Venezuela, and North Korea. Also, there is a financial perspective of the project. It is hard for newer technologies to compete with well-established industries, even if they are environmentally preferable. Fossil fuels are on the market for a long time which enabled the low-cost capital productivity, while renewable energy sources are considered as a risky investments and therefore these kind of projects have higher costs. (Jennifer Weeks, par. 14)

It can be noticed the significant growth of using the renewable resources as the primary source of energy. This trend is followed by the government reforms in the United States of America. In the year of 2009, Congress pass the energy bill which guaranteed tax breaks for renewable energy sources for the total value of $3.4 billion over the period of 10 years (Adriel Bettelheim, par. 59). With this kind of reforms and projects, it is realistic to expect the total replacement of traditional resources of energy by the renewable, green energy. Therefore, the greener future is just around the corner, waiting for the positive changes.

Renewable Fuel Biofuels and the Issues of Pollution on our Ecosystem. (2021, Oct 31). Retrieved from http://envrexperts.com/free-essays/essay-about-renewable-fuel-biofuels-and-issues-pollution-our-ecosystem 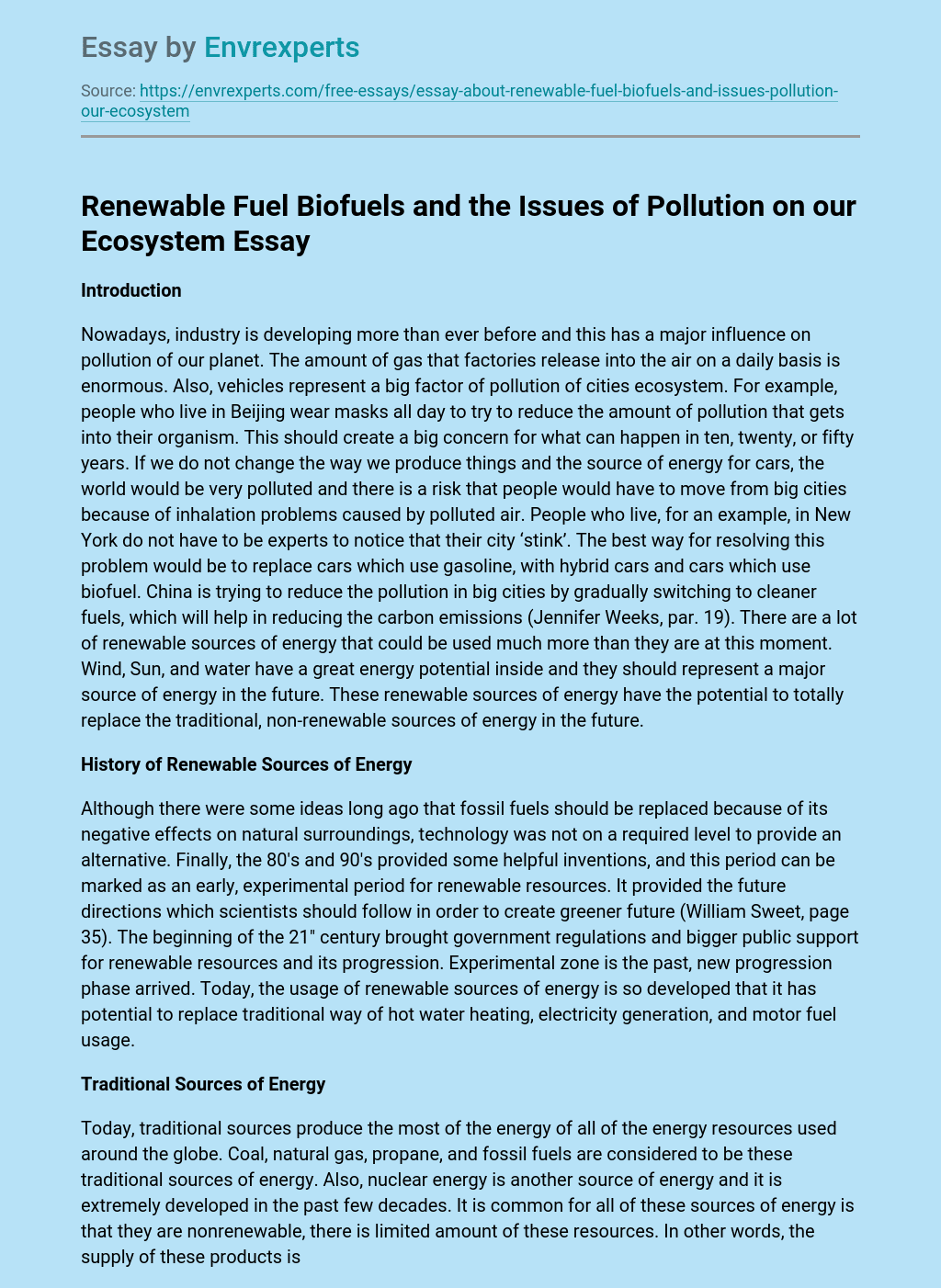