The category I have chosen to investigate is air quality.

The issue I have chosen to investigate is air emissions as a means of pollution by the Caltex Oil Refinery in Kurnell. This has been an area of great concern to residents of the area, industrialists and environmentalists.

The aim of my investigation was to find information on the reason why air emissions has polluted the environment of Botany Bay and Kurnell and the response different groups and individuals had to this problem.

Don’t waste time
Get a verified writer to help you with A Report on the Air Pollution Emitted by Caltex Oil Refinery in Kurnell
Hire writer
$35.80 for a 2-page paper

Another key objective of my fieldwork was to determine the different solutions proposed to manage the issue at hand and evaluate their effectiveness.

I planned to go to the library to collect data on the general quality of air in the Botany Bay and Kurnell district and information on the standard of air in general. To my dismay, most books were out of out of date and irrelevant to the issue. I decided next to try the Internet, the information superhighway, as I perceived it would give me more recent, up to date and relevant information.

As predicted, the Internet was far more assisting.

My next step was to analyse all the data I had gathered, come to an understanding of my investigations and produce a report detailing the key facts of the issue, main stakeholders and their view and the alternative solutions. The report is as follows:

The issue of air emissions is most appropriately and importantly directed in the suburb of Kurnell.

The reason for this is the presence of the Caltex Oil Refinery in the area (right).

Back in the 1920s and the 1930s, Caltex was eager to refine oil in Sydney and wanted to establish a refinery in Kurnell. Originally, the Council had refused Caltex's proposal, even after much persuasion that no damage would be inflicted. In 1952, the State Government gave Caltex the thumbs up and the Council was forced to give in, much to the dismay of residents. Immediately, Caltex dredged the area to create pipelines across the bed of Botany Bay.

Currently, the effects of the industry are becoming apparent. Although Caltex has agreed to work under the NSW EPA (Environment Protection Authority)'s license, which monitors and helps improve the overall pollution excreted by the refinery, large amounts of pollution are still entering the environment. A range of air pollutants are still being released in atmosphere, some including sulphur dioxide.

What brought this issue into the limelight was an incident that occurred back in late 2000. Residents of the area detected odours extending past the boundaries of the refinery. This brought new and heightened response from the public, residents and environmentalists.

Residents perceived that this was an obvious detriment to their suburb. The presence of pollutants was unsafe and unhealthy to their own welfare. Not only this, their suburb less was attractive, lose potential residents and eventually the houses in the area would decline in value. Residents were discontent and eager to put an end to this problem. In 2001/2002 there were 166 complaints about air quality, a 110 increase from 2000. 23% (approx 38) of these complaints were related to commercial industry.

Caltex, on the other hand, felt that they could not do much more to improve the situation. They were abiding by laws and listening to what the EPA had to tell them. To cease all air emissions would mean the closing down of the entire refinery, which was out of the question. They felt they couldn't dramatically restore peace straight away, but they couldn't be sitting ducks and do nothing, they couldn't let they public persona slip or get on the wrong side of people. They needed to come up with a plan.

The residents and the environmentalist suggested and urged the EPA to establish and create a new air monitoring station in Kurnell. This way the quality of air would be able to be assessed and the ambient air quality determined. If the air quality deteriorated, they would know. This is seemingly a good idea when you realise that the nearest proper air monitoring station is in Mascot and can only monitor the air in Botany. But, even if a new station was built in Kurnell, that would not help decrease the amount of air emissions. The station doesn't give you the ability to tell Caltex what to. This may be the reason why this suggestion (proposed in late 2000), to this day has not been accepted.

In an attempt to boost the public perception, Caltex has suggested to clean up its act. This seems like a reasonable solution. Not only does this give them a good image (exactly what they want, but it also supposedly improves the crisis of the air emissions. It may not solve all problems but it's a step in the right direction. By implementing this solution, hopefully the air emissions will decrease and the problem be solved.

But, Caltex's proposed action of cleaning up, otherwise known as the "Clean Fuels Project", comes in light of the Commonwealth Fuel Quality Standards (Dec 2000) and the Fuel Quality Standards Regulations (2001) that says the quality of petrol and automotive diesel fuel must be uniform nationally. This requires Caltex to change and alter the types of fuels they are producing so that these new "cleaner" fuels will cut down on greenhouse gases. In the context of air quality, this project not only does nothing to help the situation but also actually increases (only minimally) the amount of air pollutants that are released. This is planned for 2004.

In a way, Caltex does show active citizenship. Caltex shows concern for its own actions and feels compelled to do something to fix the problem. Caltex is abiding by laws passed by the government and is willing to change to these new laws. Although they are not helping to decrease air emissions, they are still displaying active citizenship, being defined as 'actively being a member of a state or commonwealth', as they have actively tried to improve the situation, unsuccessfully, but their attempts to reform has benefited the environment in another way. At least in the future there will be less greenhouse gas emissions.

So, in the end, the issue of air emissions has not been resolved. All solutions have failed. One can only ponder if in the future there will be other solutions. Will we ever breathe fresh?

A Report on the Air Pollution Emitted by Caltex Oil Refinery in Kurnell. (2021, Oct 31). Retrieved from http://envrexperts.com/free-essays/essay-about-report-air-pollution-emitted-caltex-oil-refinery-kurnell 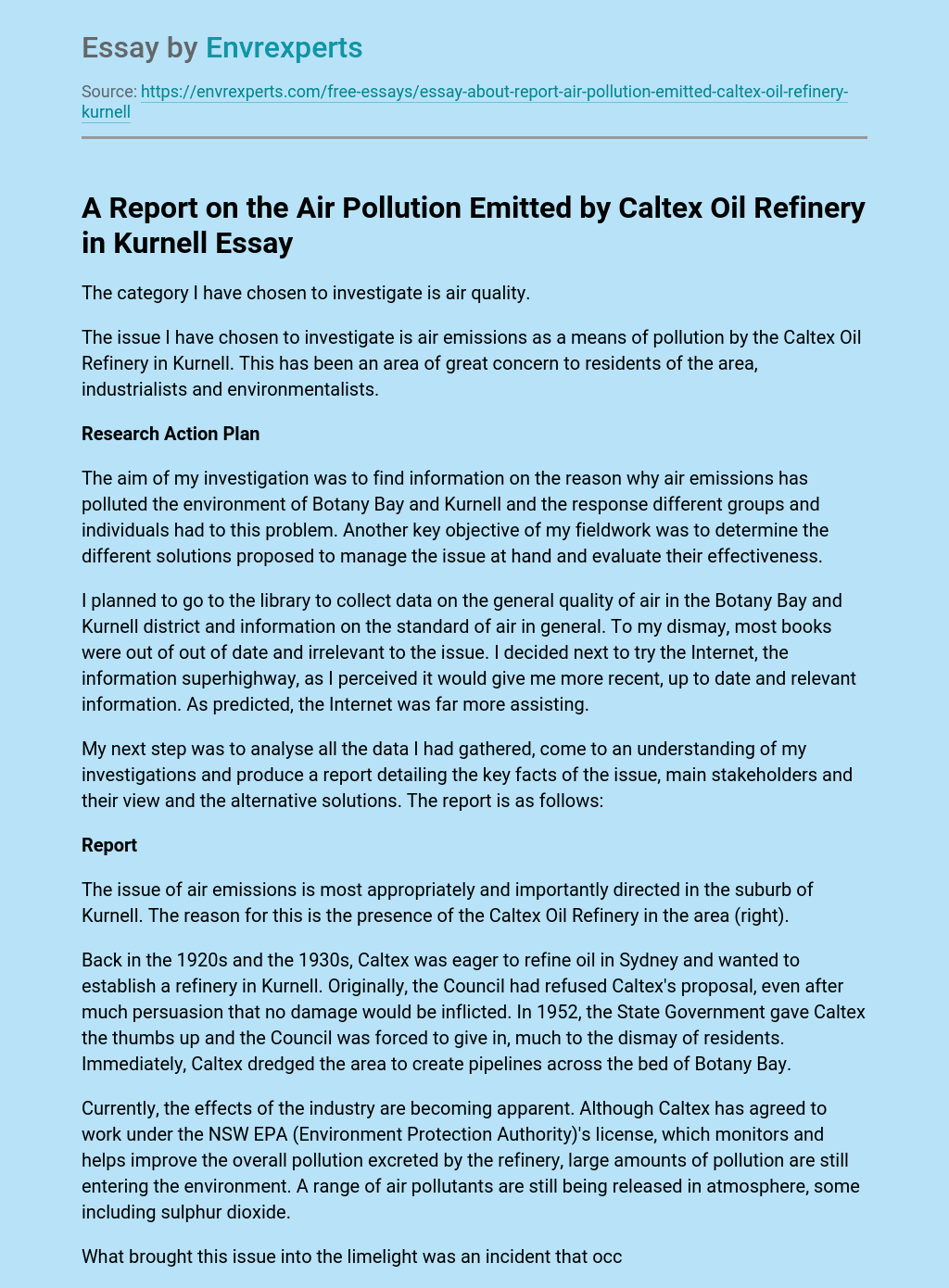