A Report on the Exxon Valdez's Oil Spill

Imagine that you are a just a small, ordinary seabird. It is March 24, 1987 and far away from you is an enormous tanker called the Exxon Valdez, coming at an astonishing speed. You do not worry, for these huge ships come along very occasionally in the Alaskan waters. The next thing you know when you turn around is that something wrong. The tanker is heading towards Bligh Reef, which is a mass of granite pinnacles. It crashes into the reef and something black, thick and disturbing leaks out of the ship into the beautiful waters of Prince William Sound.

Don’t waste time
Get a verified writer to help you with A Report on the Exxon Valdez’s Oil Spill
Hire writer
$35.80 for a 2-page paper

Your attention suddenly turns to a fish shimmering in the waters. Without hesitation, you snatch it up and gulp it down. As you're busily eating, you notice that you're covered completely with this mysterious black substance. 11 million gallons of this black substance is everywhere and it is continuing to spread and spread. You see thousands of other birds with the same problem.

You try to fly, but your wings are too heavy. You flap and flap but it is hopeless. Sinking to the bottom of the beautiful waters, you wonder what that sticky black killer was. It's simple. It's crude. It's oil.

This scenario is nothing but a harsh reality that most people were unconcerned about until the disaster of the Exxon Valdez. The Valdez spill, tragically unnecessary though it was, has served as a laboratory for scientists, in which they can study the effects of oil pollution and experiment with new cleanup methods.

It has also served as a costly lesson in the pitfalls of petroleum shipping and the shortcomings of emergency plans. It is time for us to learn from such an expensive lesson, and learn the horrid truths behind oil-spills; its cause, its effect and its solution.

When most people hear the words oil-spill, they picture the wreck of a huge tanker like the Exxon Valdez. But not all oil-spills happen this way. Some are the result of mistakes made by crewmembers as some are caused by mechanical failures. Most of it, however, involves human beings and their daily transportation of petroleum. But crude oil was gushing into the environment long before humans existed. The first were produced by nature itself. We can't stop nature and put an end to oil-spills, but we can most certainly prevent man-created oil-spills like for example, the Exxon Valdez. Believe it or not, the Exxon Valdez's captain, Joseph Hazelwood had been drinking during the sailing of the Valdez. Because of his bad habit, millions of animals had to sacrifice their lives and because of his little mistake, billions of dollars were wasted to clean up his mess.

As the Time magazine: Officials destroy Alaskan animals to help nail Exxon, pg. 36 quotes, "i when tested several hours after the incident, his blood showed that Hazelwood had been drinking." As we learn from this expensive lesson, it is crucial that the consequences of human carelessness are stricter and stronger so that this would not happen again in the future. If consequences had been harsher, it is possible that Joseph Hazelwood could have stopped himself from making such a selfish mistake that could have prevented the largest oil-spill to ever strike a U.S. coastline. Still, after more than a decade, Hazelwood and the Exxon Shipping Company face an array of civil lawsuits which were filed by Alaskan citizens, business and environmental groups. The Exxon Valdez incident shows us how high the price of human error is. The error was made. And Mother Nature has paid the cost.

The damage of an oil-spill goes deeper than any sea, higher than any sky. The oil doesn't stay in one place, but moves along with the flow of the waters. Shortly after the Exxon Valdez incident, the oil traveled far, tainting shorelines on the Kenai Peninsula, the Alaska Peninsula, and scores of islands. In all, the spill fouled 1,200 miles of coastline. That's not all. The dangers of petroleum to wildlife are well established. Seabirds can become too heavily coated with oil to fly and when they try to clean the oil from their feathers with their beaks, it poisons them. Sea otters and seals contaminated with oil may suffer from injuries in the major organs and these conditions are often fatal. Animals such as eagles, bears, wolves and foxes that eat the oil-soaked carcasses washed up on the shore get themselves contaminated with the crude oil. Of course, fish can be damaged directly by the oil, or also indirectly by its effect on the plants and organisms that make up their food chain.

"iThe spill has damaged our beautiful state beyond the potential of toll in lost livelihoods and altered lifestyles…" was said by an Alaskan citizen named Tony Dawson. The effects of the Exxon Valdez spill was nothing more than a living nightmare. In the first month after the wreck, rescuers estimated 15,000 otters killed in the area of Prince William Sound. Following that was the death of over 100 bald eagles and 36,000 seabirds of all kinds, which leads to an uncountable number of deaths. can also destroy recreation sites, especially beaches. For example, the Exxon Valdez spill has eliminated recreational use of Alaska's Prince William Sound and researchers are still not sure how long this condition will last. also damage our fresh water supply, which us humans depend on for drinking, bathing and irrigating crops. The list is endless. It's everlasting.

As much damage the oil is doing to Mother Nature, we must try to get the oil out of the seas as fast as possible. This is done in a variety of methods. There are generally three basic approaches in attack oil that has spilled into the waters. The first approach is to contain the oil and remove it from the water. The first few hours after an oil-spill has occurred are the most crucial. During this time, if booms, which are long plastic or rubber barriers, are placed around the edges of the drifting oil, the oil can be stopped from doing further damage. Then, they skim the oil, which means to remove the oil from the water's surface. In the disaster of the Exxon Valdez, they did try to get the oil out of the water. It's just that they missed the part about having it done as soon as possible.

This was the Exxon Valdez, which was moved to a place where temporary repairs could be done. The linings around the vessel are booms.

Quoted from the book, Environmental Disasters: Oil spills, pg. 54, "iit took the Alyeska Pipeline Service Company's response team 12 hours to cover 28 miles to the spill site instead of the 5 hours their contract demanded." Furthermore, it turns out that their equipment was not sufficient enough for the entire Valdez spill, but for a small fraction. Recalling this incident, if laws that require better training for emergency crews and to set up more emergency response centers that can handle a larger oil spill are made, it would be possible that the oil could be taken out of the water in a faster period of time in the future. Currently, scientists are analyzing the results of cleanup programs in Alaska and working to develop more efficient methods of removing spilled oil.

Even though we had such a costly lesson to teach us the simplest things in life, such as the importance of nature and life, it's not too late. Now that the world is aware of the frightening disasters oil can create, hopefully we can now try to reduce the usage of petroleum in our daily lives. In the memory of the hundreds of lives that have died in agony, in the memory of every cent spent to reduce the damage of oil spills, we should start caring for our home, our world, our planet Earth. For the sakes of beautiful creatures that we have yet to uncover in the depths of the oceans, let's do everything that we can. But as we do, we must keep in mind one small fact. It will happen again.

A Report on the Exxon Valdez's Oil Spill. (2021, Oct 31). Retrieved from http://envrexperts.com/free-essays/essay-about-report-exxon-valdezs-oil-spill 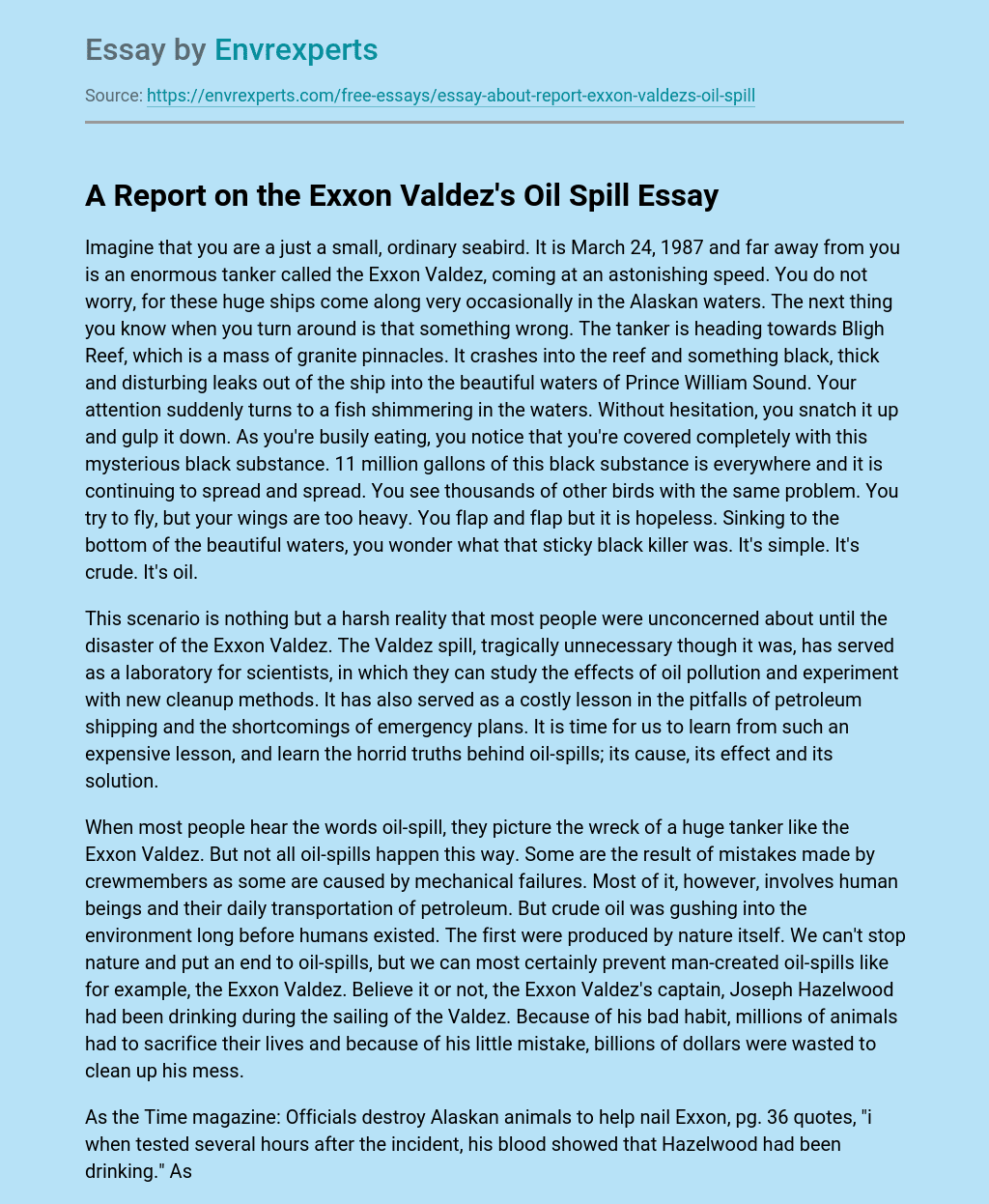