According to Partain & Fraas (3), the history of the solar cells seems to be quite interesting. From the findings of Edmond Becquerel which took place in 1839, humanity was presented with a scenario where two different brass plates that were immersed in liquid resulted in the production of a continuous current when linked to sunlight. It is widely believed that this orientation is what led to what we now know as copper-cuprous oxide thin film solar cell (Partain & Fraas, 2010).

Don’t waste time
Get a verified writer to help you with A Report on Solar Cells: Their Development, Causes, Exploration, New Generation, Application in Australia and Future Plans
Hire writer
$35.80 for a 2-page paper

E. Day, W.G. Adams ad Willoughby Smith who all contributed to the discovery of a PV effect in selenium.

Despite all this discoveries by different scientists, the solar cell industry remained small. However, the Arab oil embargo that took place in 1973 changed this perception, and as a result, witnessed the emergence of the solar cell industry. Going back into time, it was Charles Fritts, who in 1977, constructed the first true solar cells. It was an interesting orientation considering what we have today, and Fritts employed junctions that were formed through coating the semiconductor selenium and mixed it with an ultrathin (Partain & Fraas, 2010). The efforts put across by Fritts did not generate much as they were inefficient resulting into only transforming less than one percent of all the absorbed light at the time.

Transformation of solar cells took place between 1905 and 1930 where Einstein and Schottky both, respectively, added a new dimension into the efficiency of solar cells. AS of early 1930s, mankind had begun using light sensitive devices which were a composition the copper oxide cell and selenium cell.

The early years of 1940s will have Russell Ohl to thank for his contribution on the first silicon cell. This marked a major progress into the efficiency of solar cells. Changes were further to come in 1954 when there was modification of the silicon solar cell which had the capacity to conserve six percent of the energy (Partain & Fraas, 2010). Significant researchers towards this cause were G.L Pearson, Calvin Fuller and Daryl Chapin, who were all distinguished American researchers. Silicon cells were further modified in the early eighties which led to an efficiency level of twenty percent. An increased intensity of energy collected also made a greater efficiency capability to 37 percent.

In earlier days, most people wanted an option out from over depending on coal. For instance, Auguste Mouchout wanted to find out other forms of energy apart from coal, which had become a common form of energy. Power was also invented in the early days so as to satisfy the prodigious expansion that was taking place in Europe. Solar power was also invented as a substitute of fuel in the tropical countries. Coal, in the early days, was not as consistent and readily available for the growing and expanding industry and which was going to power the machinery industry. Most of the researchers who invented power believed that the dominance of coal was soon coming to an end and so the need for an alternative.

The first company that explored the solar power was the Solar Motor Company in 1900 which was formed by the support of Aubrey Eneas who was a resident of Boston (Smith n.d). There were several challenges that Eneas came across while trying to experiment his first solar motor company. This included returning to the older concepts of Mouchout's approach which also turned out to be a failure. Aubrey did not give up with his solar company and decided to make the bottom of the reflectors truncated cone-shaped. The sides were made by more upright characteristics which were aimed to direct the radiation unto a boiler.

Inventing Other Generations of Solar Power

According to Silverman (2011), First Solar Company added a new dimension into the generation of solar power by stating that it was able to surpass the vaunted $ 1 per watt threshold. However, there were still several obstacles in the way before this idea can be fully realized. There are still several countries that are still in the public domain as they compete towards presenting solar cell efficiency in the power sector. Furthermore, in 2007, Sanyo came out and deliberated on its efforts towards generating power that was cost effective. One of its major initiatives was to generate a prototype of a silicon based cell. According to the management, the efficiency level of this move was described as 22 percent (Silverman, 2011). On the other hand, Spectrolab had also presented its initiative which marked an efficiency solar level of 40.7 percent. All these efforts points towards company modifying ways in which they can be able to generate the solar power at a minimal cost.

As inventions into the solar efficiency mechanism continues, an Australian company, Air Change which is a Sydney based company specializing in heating, ventilation as well as air conditioning systems announced the development of a solar powered air conditioner. This is one of the progresses being made in the solar industry which has also seen the company limit the possibility of compressors as well as ozone depleting materials, which has been made possible through its Green Machine air con (Silverman, 2011). In order to encompass a wider perspective of users, the company has designed models that will be used for home use as well in commercial buildings. It is also easier for the new system, the Green Machine, to be incorporated into new properties and also in existing structures. It is worth noting that there is some advancement being made in the solar industry, as noted by Silverman and includes more efficient methods of storing the solar energy as well as heating liquids into steam (Silverman, 2011). 60 percent efficiency has been witnessed by the solid state heat engine that is created by the Super Soaker inventor.

There have been plans being put in place as a way of preserving the use of solar energy for future generations. One such gesture has been from Molecular Solar Limited where £5 million have been set aside as an investment plan for a solar cell company with a golden future. The solar cells being placed into use are from organic semiconductor materials which are cost friendly to the environment. It is also important to illustrate, according to University of Warwick, that various companies have been participating towards developing of prototype third generation organic solar cells among them Technology Strategy Board (TSB), the Engineering and Physical Sciences Research Council (EPSRC) and the other participating companies (Kurt Lesker, Asylum Research and New World Solar (University of Warwick, 2011). Support has been coming in ever since Molecular Solar announced its intention to develop a gold plated window which will act as a transparent electrode for organic solar cells. 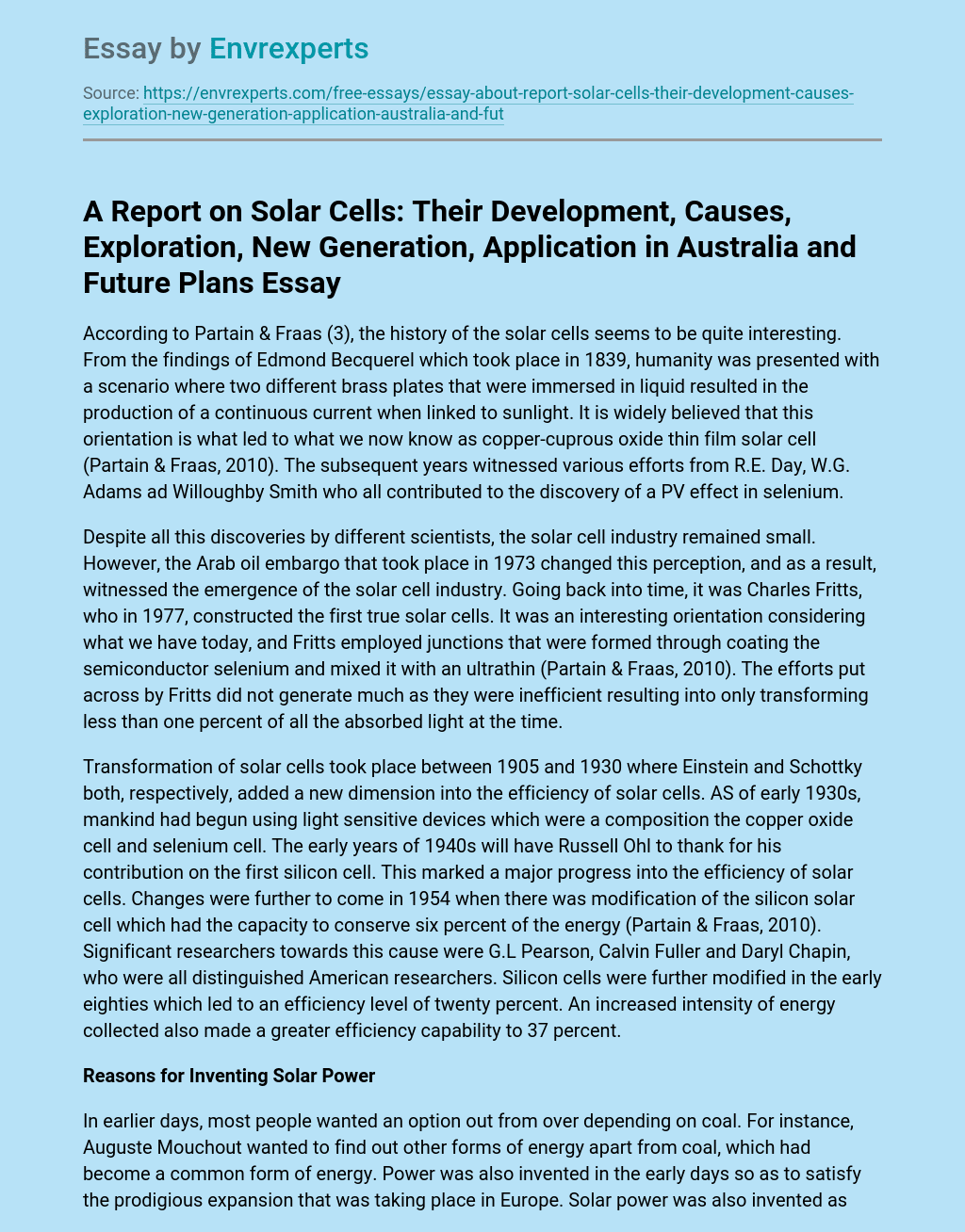