A Report on Two Environmental Hazard Cases: The Love Canal Incident and the Gems Landfill Incident

The Love Canal incident was a very devastating environmental hazard caused by greed and ignorance. Gems landfill is a close to home; literally it's in Gloucester Township, which is a similar issue. Both expressed threats of chemical hazards, but Gem's is that of above ground infiltrating deeper and Love Canal is that of belowground seeping up.

Don’t waste time
Get a verified writer to help you with A Report on Two Environmental Hazard Cases: The Love Canal Incident and the Gems Landfill Incident
Hire writer
$35.80 for a 2-page paper

Then when the canal was filled a ceramic lid was put over the area and it was later built upon by sports fields and later a school followed by a town. This lid was breached and filled with and the area was beginning to be infected by the toxins seeping up from below. The public complained of smells and unexplained rashes.

It got to the point when legislative action was required; it was declared a natural disaster on August 7, 1978. The cleanup consisted of a massive synthetic cap installed over the infected area and 40 surrounding acres. After this the capped area was quarantined but the surrounding parts of the city have begun to recover from the incident. This resulted directly in the passage of CERCLA act or the Superfund act, enacting economic repercussions.

Gems Landfill was something like this. The landfill was owned and misused by several groups since the 1970. The fill had been riddled with solid and liquid waste from these various parties.

Rain carried these contaminants into the ground water under and around the site with VOC's and chemicals like DDT. Because of the sites close proximity to people, they were concerned for their health, it was closed down in 1980. The legislative response to this was to have a three step treatment plan, immediate actions and a two part long-term approach. Economically this will cost a lot to succeed in cleaning up the area and that is the only deterrent for those who live in the vicinity.

These two incidences have quite a few similarities, but are quite different at the same time. They both involve chemical hazards one from above ground and the other from below. I chose Gem's landfill because of its similarities to Love Canal. Both seemed to be the product of thinking of in the now and not of the future, which shows a great lesson that we should always look for the future repercussions not just the beneficial now.

A Report on Two Environmental Hazard Cases: The Love Canal Incident and the Gems Landfill Incident. (2021, Oct 31). Retrieved from http://envrexperts.com/free-essays/essay-about-report-two-environmental-hazard-cases-love-canal-incident-and-gems-landfill-incident 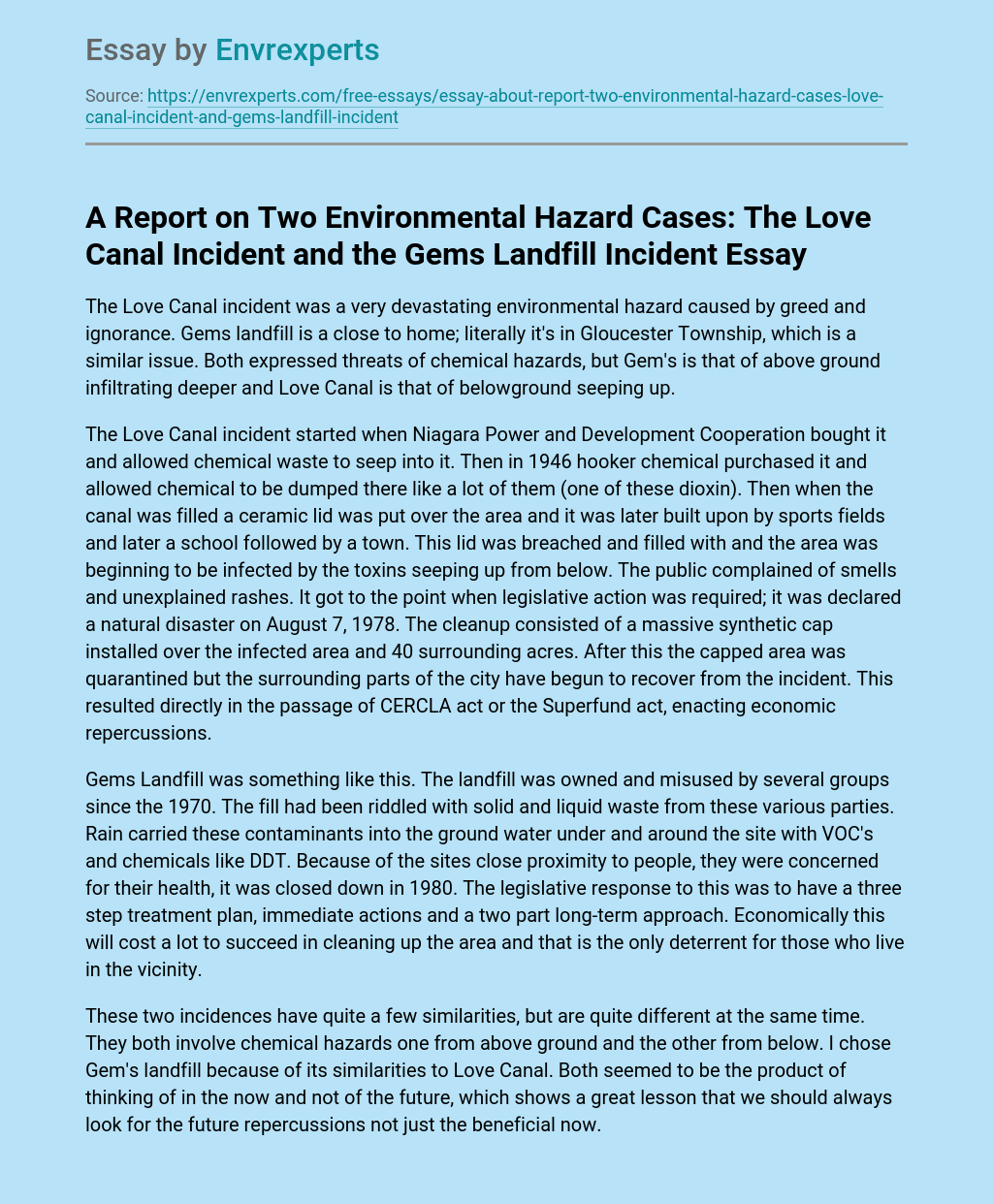