A Research on Air Pollution in Our Environment

Air, is the most essential element for all living organisms and yet, most humans play a big role on polluting this essential resource. Air pollution may not be as dangerous in its direct outcome as nuclear or water pollution can be, but in the long term it will have an tremendous effect on the environment and health of its organisms living in. Asthma, cancer, acid rain, and the disability to photosynthesize are only a few causes of air pollution. The atmospheric pollutants with the greatest effect onto the environment are the carbon monoxide, carbon dioxide, hydrocarbons, sulfur dioxide, nitrogen oxides, dust particles, radioactive isotopes, and chlorofluorocarbons.

Don’t waste time
Get a verified writer to help you with A Research on Air Pollution in Our Environment
Hire writer
$35.80 for a 2-page paper

The major sources that enable carbon monoxide to enter the atmosphere are the exhausts of cars, the burning of fossil fuels, and the oxidation of natural methane. Carbon dioxide is caused by the consumption of fossil fuels only and it causes the possible greenhouse effect which has global warming as an outcome. Hydrocarbons are caused by the combustion of oil and petrol and it effects the environment with carcinogen.

Carcinogen is a chemical agent that causes cancer. Sulphur dioxide is certainly one of the major atmospheric pollutants considered that it causes stinging eyes, lung damage, asthma, and acid rain. It is the result of coal-fired power stations. Nitrogen oxides that is produced by the exhaust of cars, causes pneumonia and asphyxia. The outcome of the well known dust particles is often underestimated. It is caused by industrial chimneys, car exhaust, and volcanic eruptions and it effects the environment by toxic effects and damage of the lungs.

Radioactive isotopes which are caused by small quantities from nuclear waste and nuclear accidents have an carcinogenic effect on the environment as well. The outcome of chlorfluorocarbons, which had been first discovered in the 80s is that it destroys the ozone layer. Many of those major atmospheric pollutants combined produce the dangerous and well known smoke and gas emission called smog.

Smog or dust dome is most often formed when a layer of cool air is trapped beneath a layer of still warmer air. The mixture of benzopyrene (a cancer causing substance that is produced by the evaporation of petrol), the waste of hydrocarbons, combined with nitrogen dioxide, oxygen, and sunlight produce the photochemical smog which can be recognized as the yellow cloud over every big city in the world. Besides that optical effect it causes an increase of ozone in the lower atmosphere and the health conditions of the particular organism living in such an area. For example, it is estimated that Washington DC receives 10% less sunlight than at the begging of the century due to the shielding of atmospheric pollution. The ozone enters the leaves of plants turning them brown and makes it difficult for plant to photosynthesize. In addition to that, it causes skin cancer on humans. Most seriously though, it increases the acidity of the rain which is mainly caused by the rise of sulphur dioxide and nitrogen oxides that get caught up by clouds. All ready unpolluted rain is slightly acid due to dissolved carbon dioxide, but polluted rain may be very acidic. The effect of acid rain on terrestrial and aquatic ecosystems can be very different. In Scandinavia, which receives a high proportion of its air pollution from Britain, once productive lakes are now completely devoid of fish.* In addition to its direct effect on water, acid rain allows metal ions such as aluminum, which is highly toxic to fish, to be leached from the soil . Acid rain reduces the growth of trees and disables plants to photosynthesize which destroys them in the long term. It also reduces the activity of nitrogen-fixing bacteria. In the event of a nuclear accident or war, the main risks do lay only partly in the pollution of air and air as a carrier of the polluted particles. The main risks arise from inhalation of contaminant particles, fallout of radioactive isotopes on soil with subsequent incorporation into food, and contamination of water supplies. The outcome of all those pollutant factors are enormous. The smoke from car engines which contains lead, that causes brain damage in children, stinging eyes, damage of the lung, the death rate of 40.000 asthma patients every year, and the destruction of whole forests includes only a few examples of the effects of air pollution. There are many ways to control and reduce air pollution and it is not the lack of technology but the unwillingness of the humans to change their attitudes and life styles.

It exists a wide range of technology for effective air pollution. Emissions of dust can and should be controlled by filters which remove solid particles before gases are discharged. Low sulphure fuels could be used in order to reduce the sulphure emission from coal-fired power stations. For all other forms of waste that get released during production into the air, technology provides a wide range of filters which are able to remove 80-95% of sulphur dioxide gas. The control of emission from the most common pollutant, the car, improvements can be made. The use of lead free patrol and catalytic converters would reduce toxic emissions to a fraction of their present level and prevent damage to the environment. Of course are the big companies the one which produce most waste and cause most pollution, but in order to change and reduce the air pollution, everyone, even the smallest household, needs to change its attitudes and be more responsible with the limited sources the nature is providing. If humans would be less greedy for money and willing to ensure a safe and clean environment for the children of tomorrow, vast improvements could be made that would be beneficial for the whole world.

A Research on Air Pollution in Our Environment. (2021, Oct 31). Retrieved from http://envrexperts.com/free-essays/essay-about-research-air-pollution-our-environment 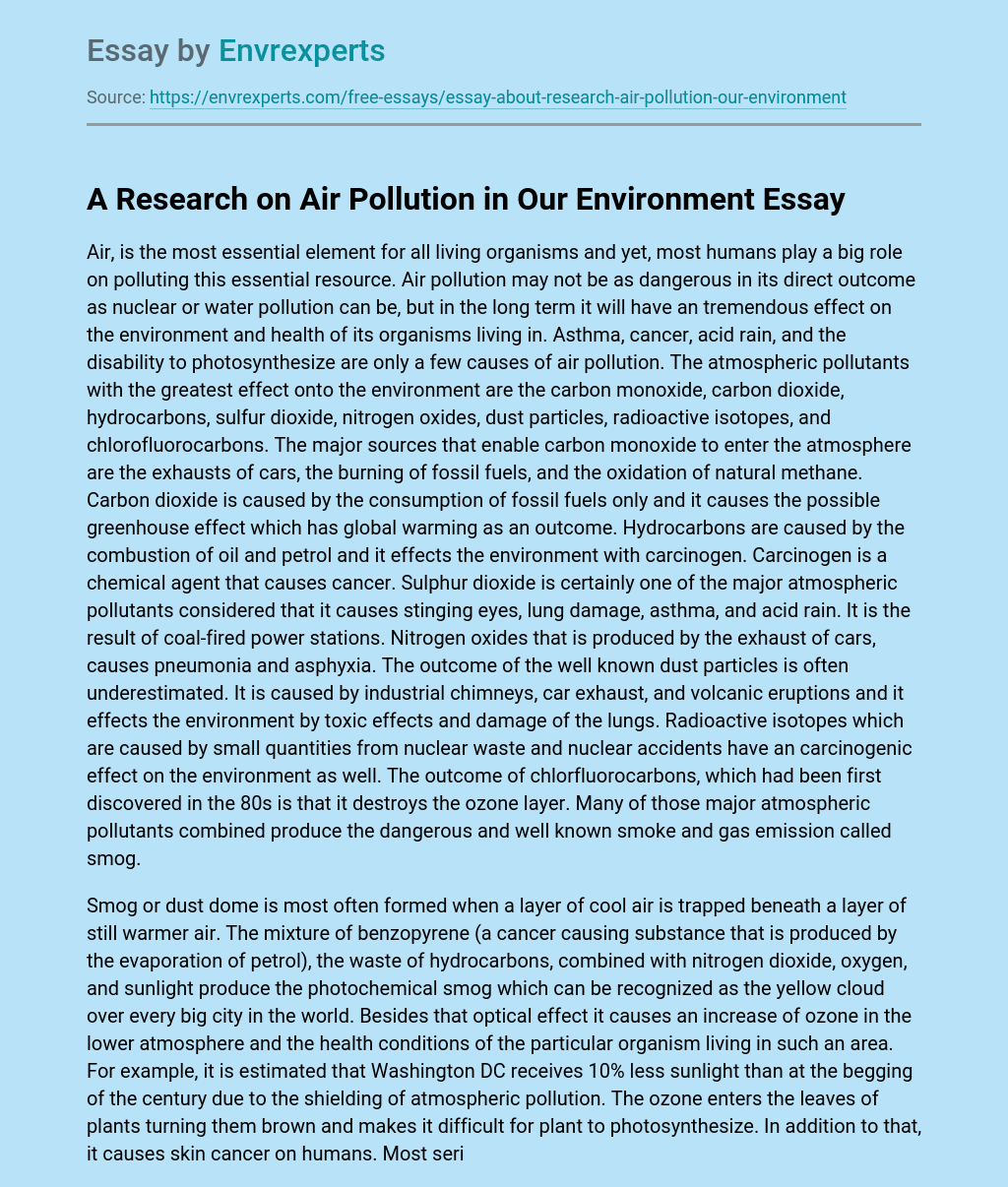