A Research on Alternative Fuel for Automobiles

An alternative fuel automobile is an automobile that is powered by a fuel save for traditional fossil fuels (diesel or petrol). Alternative fuel refers to any other method of running an automobile other than diesel and petroleum. As the economy grows, the energy demand increases as the products and equipment we own increases in number and as we insist on added functionality from new appliances (Sperling and Deborah 42). This therefore calls for good quality statistics to help us understand the underlying trends in energy availability and consumption given that our energy uses has a major impact on our environment.

Don’t waste time
Get a verified writer to help you with A Research on Alternative Fuel for Automobiles
Hire writer
$35.80 for a 2-page paper

Owing to a combination of increasing fuel prices and environmental laws that are becoming tighter; particularly in California, and the likelihood of further greenhouse gas emissions restrictions, work on alternative fuels and energy systems for automobiles is becoming a high priority for automobile makers and governments globally (Alternative-Fuel Vehicles Getting Most Attention 23).Hybrid vehicles make a more efficient use of diesel or petroleum fuel through highly developed expertise in the electric battery and generator/ motor.

Honda Insight was the first hybrid car available for sale in the U S. It was achieving about 3.4 liters per 100 km (70 miles per gallon). Other research efforts in alternative fuels focus on developing alternative fuel combustion modes such as HCCI and GDI, and even the compressed air potential energy (Sperling and Deborah 43). There were approximately 32 million advanced technology and alternative fuel vehicles on roads globally between 2008 and 2009, representing around five percent of the global automobile fleet. This alternative fuel automobile is mainly made up of:

Most hybrid cars alternate between a gasoline-powered combustion engine and a battery-powered electric motor.

The overall concept behind hybrid technology is that less gasoline is consumed, because the motor is mostly or partially powered by a battery. In theory, hybrid cars produce fewer emissions than standard gasoline-powered cars. The emissions created by burning fuel–most prominently carbon dioxide gases–are widely believed to contribute to global warming. Consequently, many environmentalists have celebrated the recent popularity of hybrid vehicles (Hybrid Vehicles).

Hybrid cars entry into US market

United States huge consumptions of gasoline become a concern in the 1970s. This concern was precipitated by the 1973 energy crisis (Hybrid Vehicles). During the Yom Kippur War in 1973, major Middle East oil-producing nations vowed not to export any oil to Israel and its allied nations, including the United States. As a result, oil and gasoline prices skyrocketed while supplies fell in the U.S. Although the embargo was lifted in March 1974, the effects were felt all through the decade. This energy crisis ultimately led automobile makers to design smaller, low fuel consuming cars. This challenge also revitalized interest in electric powered vehicles, which do not use fossil fuel at all (Hybrid Vehicles).

Global warming also became a growing concern in the whole world and especially in America in the late early 1990s. People realized that the earth is increasingly becoming warmer than it would have been due to an increase in greenhouse gases and emissions from fuel combustion which releases carbon dioxide (CO2). Some consumers of gasoline articulated a concern and willingness to purchasing vehicles that emitted a reduced amount of destructive greenhouse emissions, such as carbon dioxide.

Biofuels use in US

Both methanol and ethanol have been used as an alternative automotive fuel. While both methanol and ethanol can be obtained from gasoline or natural gas, ethanol more considered as a renewable fuel, because is easily extracted from starch or sugar crops and other crops such as grain, sugarcane, lactose or even sugar beets (Hunt 86).In the U S, California led the sustainable fuel alternatives research with interest in methanol. A new Ford FFV Taurus model was designed in 1996, which was fully powered either by ethanol or methanol blended with petrol. This model was the first production commercially as E85 ford FFV (Truett 22).

The Future of alternative fuel vehicles and hybrid cars and fuels

Alternative fuel vehicles and hybrid cars have gained recognition of late. There is a possibly that their use will overtake petrol/diesel cars overtime. Alternative fuel vehicles and hybrid cars are increasingly becoming affordable; most hybrids cars cost around 30 thousand dollars, which is close to the general average price of a new car of28 thousand dollars (Federal Trade Commission). It is predicted that most vehicles on our road will be hybrids of some kind, within a few decades.

Supporters also admit that hybrid and alternative fuel vehicles cars are not powerful as conventional vehicles. Proponents argue that many hybrid and alternative fuel vehicles are equal to gasoline-only cars in reality in terms of acceleration, speed and handling–a protest against the "golf cart" stereotype in the mid-1990s that dogged electric automobiles when they were introduced to the U.S. market.

The public transportation sector consumes a bulk of the gasoline in U.S. Total transport consumption currently represents almost two thirds of total gasoline consumed in the nation and approximately a quarter of the nation’s total energy consumption. Each day, in the United States vehicles guzzle about 15 million barrels of gasoline. This figure is projected to rise to 20 million barrels per day (Energy Information Administration- EIA). To address this trend which have been a concern for a period of time, some measures have been introduced to either reduce gasoline use or to have more diversified fuels in this sector. Other measures taken include introduction of tax incentives, alternative fuel automobiles mandates, and legislations to enhance automobile fuel efficiency. Congress passed the Energy Policy Act (EPACT) in 1992, which, sought to substitute at least ten percent of the estimated gasoline consumed by cars in 2000 and 30 percent by 2010 with alternative fuels-such as methanol, ethanol, liquefied natural gas, compressed natural gas, liquefied petroleum gas, and electricity. To achieve these goals, federal tax deductions and credits meant at encouraging the use of alternative fuel vehicles and fuels were established. State governments, Federal agencies, and private consumers have increased the purchase of a number of hybrid and alternative fuel vehicles. However, Hybrid and alternative fuel consumption in the automobiles remains relatively low despite these efforts.

The comparatively low price of gasoline and diesel-oil prices are not yet high enough to provoke many people to relinquish their conventional petroleum and diesel consumption in favor of alternative fuel and automobiles. For instance, EIA performed an analysis which established that even if oil prices were doubled, it would not be significantly enough to augment the market consumption for alternative fuel. Moreover, an entire auto-manufacturing system and refueling infrastructure dedicated to conventional fuel has been established for long and has become so developed and entrenched. However, the alternative fuel refueling infrastructure is insufficient.

Certain alternative fuel vehicles cost relatively higher. On average, alternative fuel automobile are more costly than conventional vehicles. This reduces the general public incentive for their purchase them. These costs vary by type of car, or instance, a car that runs on compressed natural gas costs between 3,000 dollars to 5,000 dollars more than the same conventional version. The price of an electric powered car ranges from the low 30,000 dollars to about 40,000 dollars.

A Research on Alternative Fuel for Automobiles. (2021, Oct 31). Retrieved from http://envrexperts.com/free-essays/essay-about-research-alternative-fuel-automobiles 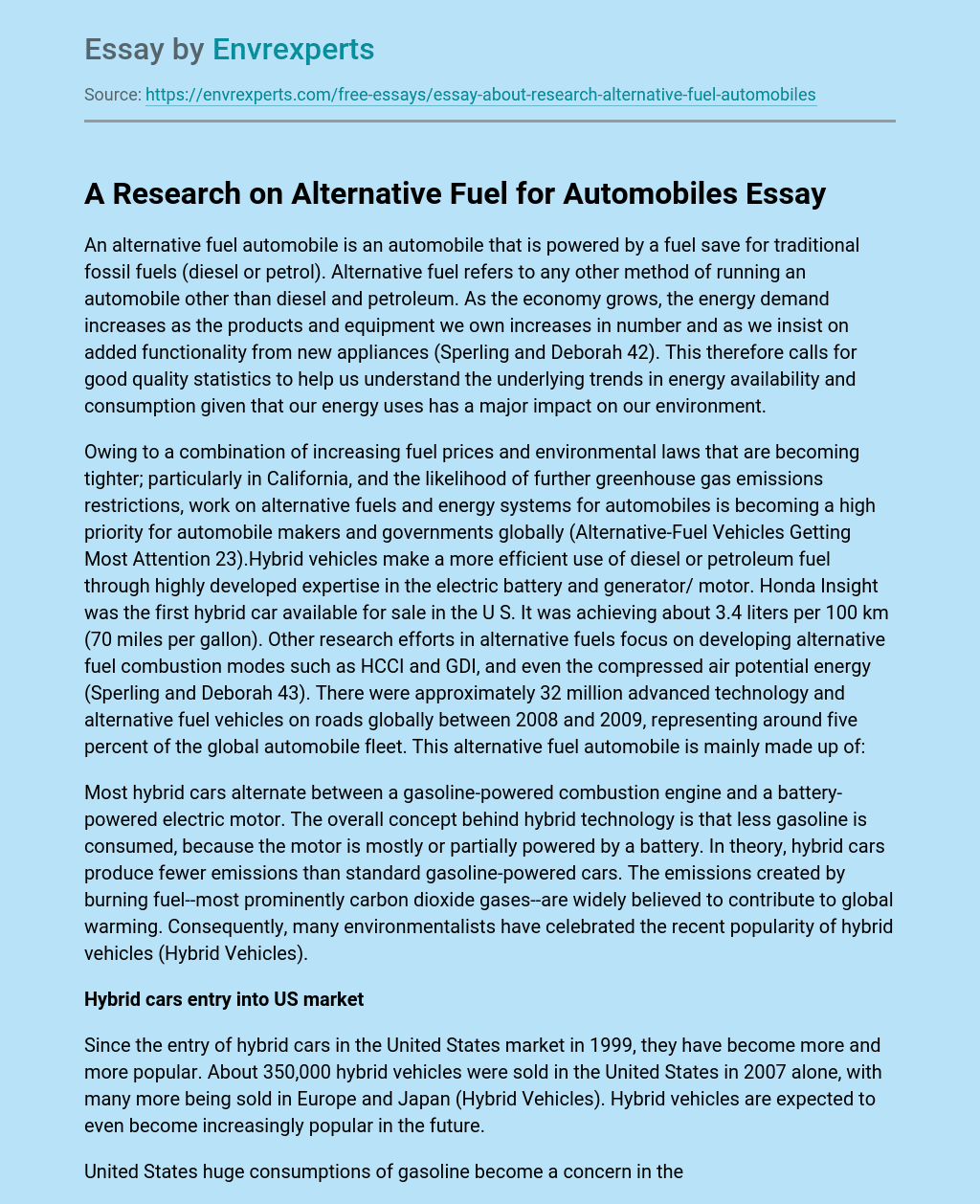