A Research on Biodiversity

Don’t waste time
Get a verified writer to help you with A Research on Biodiversity
Hire writer
$35.80 for a 2-page paper

Our diverse earth comprises of plants, animals and other microorganisms. These are all a part of the diversity of the world. Sustainable developments in environmental conservation are necessary to the approach of biodiversity preservation. All the world's cultures are said to have originated from the rich biodiversity that existed in the world. Biodiversity plays a key role on the earth because many organisms survive at different environmental situations.

This eventually contributes to the stability of the food chain. However, maintaining biodiversity is important and there are three major ways of doing it. These are: maintaining stability in the environment, proving food and medicine as well as educational benefits. The diversity of species attributes to the stability of the ecosystem. Therefore, retaining the biodiversity of a system brings about a state of equilibrium in the environment and maintenance of lives (Mayden, 180). The ecosystem provides food for human beings and, therefore, the various species of animals and plants should be preserved.

According to the surveys of the various kinds of plants available in the world's ecosystem, more than eighty thousand species are edible to human beings and animals. Modern medicines are extracted from some of the plants. Overall, biodiversity provides resources as raw materials for many industries.

Geologically, extinction is natural in the ecosystem. Nearly half of the species that have ever been seen in the world have gone extinct due to various reasons. In the current era, human actions have threatened many species in the ecosystem, and this has led to their extinction. However, the main threats of biodiversity include climate change, pollutions, degradation and overhunting. Large mammals and whales have been subjected to various hunting activities and this has led to their extinction. This commercial hunting is mainly for food and other purposes such as fashion and profit. All species of animals and plants have their main source of food as well as habitat needs. This localization leads to vulnerability of the animals and plants due to loss of a habitat because of degradation. Degradation results from the conversion of forestland by human activities, such as agriculture (Wilson 72). Other threats such as pollution and climate change endanger all species in the ecosystem and eventually lead to extinction.

In order to increase the income of a particular nation, resources have to be used in order to develop the country and at the same time provide for the consumer needs (John and Carl 185). This means that some biodiversity is depleted in the process of economic growth. Therefore, over preservation of biodiversity does not provide an opportunity for the economic growth of a nation due to the inaccessibility of various raw materials that are used in industries, to provide products that are sold to bring back income to the nation. However, biodiversity earns income to countries from the tourism perspective.

The UN Convention on Biological Diversity should approve conservation of biodiversity. This has great benefits over many nations. Preserving all species is important in maintaining a state of equilibrium in the ecosystem as well as provides an opportunity to a country in circles of tourism.

A Research on Biodiversity. (2021, Oct 31). Retrieved from http://envrexperts.com/free-essays/essay-about-research-biodiversity 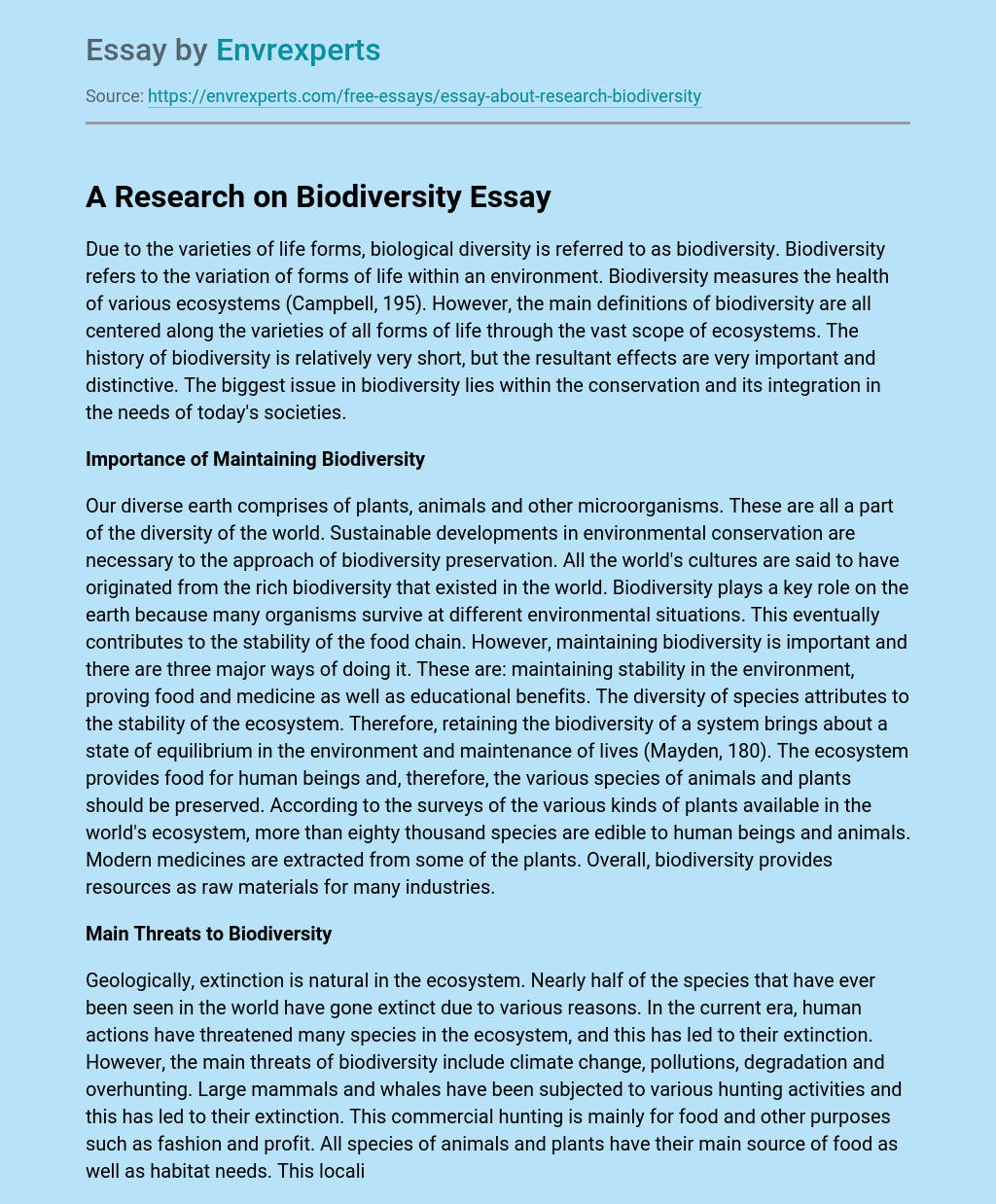