There's a worldwide problem, in which waste is polluting our environment. As humans produce new chemicals, biotic factors are affected in it. According to the Basel convention of the UNEP, "Wastes' are substances or objects, which are disposed of or are intended to be disposed of or are required to be disposed of by the provisions of national law." Reporting waste is really difficult and inaccurate since many countries have different definitions of waste. In the year 2001, the Basel convention estimated about 338 million tons of waste in the whole world.

Don’t waste time
Get a verified writer to help you with A Research on the Chemical and Waste Management in the United Kingdom
Hire writer
$35.80 for a 2-page paper

In the same year, OECD estimated about 4 billion tons of waste in the world. The main cause of this issue is overproduction. All these inimical substances are discarded by industries and humans that are not conscious of the impact that chemical waste has on earth and the human race. This has become a problem, since all these new creations are useful and give people advantages. Therefore, it is difficult to persuade people to stop using them.

The aforementioned problem has an indirect effect on the humans. After all, waste is incorporated in the food cycle and food webs. Chemicals can produce cancer, birth defects, neurological disorders, and hormone-disruption. This leads to an increasing death rate among living things. An example is mercury, which is really useful for getting gold, sometimes ends up in rivers, which poisons fish and other creatures. Afterwards, we eat fish, and we are contaminated by mercury, which is extremely pernicious for human health.

Another example is the attraction of rodents to waste; these can harbor yellow fever, gastrointestinal parasites, and worms. Another example is burning waste; gases are released and can infect lungs and develop pulmonary diseases. Besides, these greenhouse gases cause acid rain, ozone depletion, and other types of environmental poisoning. Social problems can as well be developed, since people may blame or not take the blame for inappropriately disposing waste. Even conflicts among neighborhoods, cities, and nations are possible if these disputes maintain their presence.

In the world, many actions have been done in between nations. Like The Basel Convention on the Control of Transboundary Movements of Hazardous Wastes and Their Disposal is an international treaty that promotes better chemical and waste management for the safety of humans and their health conditions. This treaty was designed to reduce hazardous chemicals and waste movements among nations. This was also designed to reduce generation of toxic material and their movement from developed countries to developing or less developed ones. This convention was opened for signatures on March 22 of 1989 in Basel, Switzerland. The UNEP is trying to promote chemical safety and provide information about chemical and waste disposal. The third meeting of the Global Alliance was held to eradicate lead paint (GALEP), establishing legal limits; preventing people and companies from using lead. The meeting was held on Monday 22 and Tuesday 23 September 2014. Both events were hosted at the WHO Regional Office for South East Asia and were taken place in New Delhi, India. Lead is being used to avoid corrosion and make paint last longer. The issue is that it is very toxic for people, animals, and the environment. Also, a mercury management program was held in Geneva from 13 to 18 January of 2013. This was to eliminate mercury use because it is a venomous chemical that is useful for mining. The problem is that it can end in our water, food sources, and can finally poison humans.

Many organizations like the International Program on Chemical Safety promote and enforce safety regulations when chemicals are managed. This is to ensure human and environmental health. The PHS waste management is an organization that handles citizens' waste in two categories: Healthcare and Chemical. This company sorts, recycles, reuses, investigates, and appropriately disposes chemical and other waste that can be catastrophic for the environment and living things.

Country Policy and Possible Solutions The UK has strict policies about hazardous and nonhazardous waste. Regardless of the UK's “toxic” history, as their main objectives, UK wants to protect human health and the environment. In 2008, UK has had an estimated 290 million tons of waste, but the amounts are decreasing. To accomplish its goal, UK established facilities with permits, issued by the environment agency, in which citizens can dispose their wastes. The facilities will manage and recycle most of the substances. Another objective they have is to implement the waste hierarchy to produce less, and dispose waste as "the last thing you would do.” The waste hierarchy consists in these: Prevention, Preparation for reuse, Recycling, Other recovery, including energy recovery, and as the last and ultimate thing you would do with waste is dispose it. All of this is to reduce gas emissions, and greenhouse gases that cause acid rain, ozone depletion, and other environmental poisoning. The European Union is one of the major allies the UK has. Most of the treaties, organizations, and ideas created and developed by country members of the EU, are shared and discussed to come to an agreement with the EU. For example the waste hierarchy implementation was introduced as a concept policy to the EU in 1975 to prevent, reuse, recycle, renew, etc. I have many proposals, but first is education. Education always comes first, and it is really important for the formation of the people. Education can provide people not only knowledge, but also many other services like jobs to people who need them, food, water, safety precautions, etc. Another proposal I have is to establish laboratories and centers where people can get jobs to investigate, develop, manage, create, engineer and discover new technologies or new ways of managing, reducing, reusing, renewing, and recycling chemicals and waste.

A Research on the Chemical and Waste Management in the United Kingdom. (2021, Oct 31). Retrieved from http://envrexperts.com/free-essays/essay-about-research-chemical-and-waste-management-united-kingdom 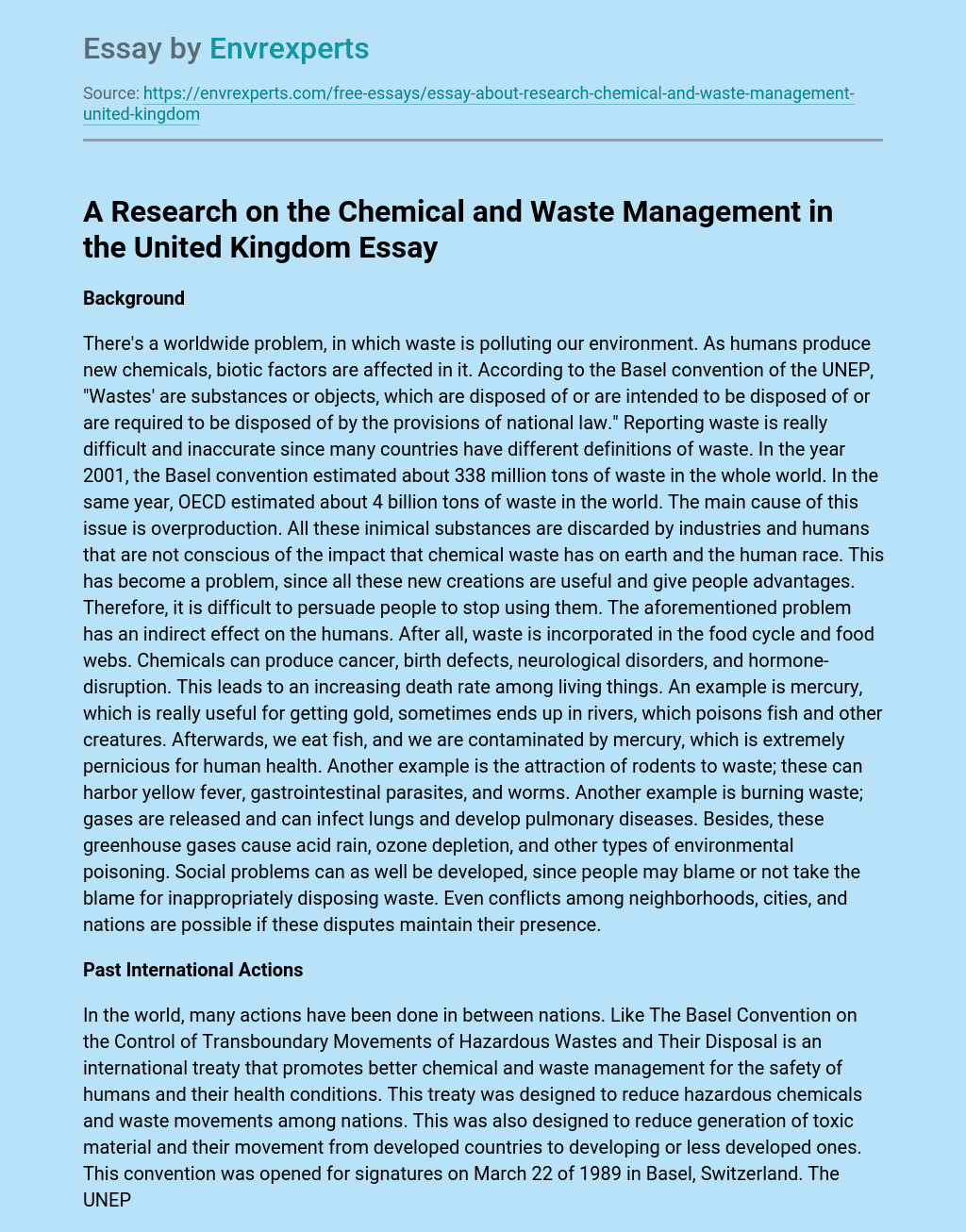