In 2015, David Smith's "How Africa's fastest solar power project is lighting up Rwanda”, was published by the Guardian news. Smith concludes that solar power is advantaged in many perspectives, including residents' livelihood and economy (Smith, 2015). He also claimed that solar energy is a key element in Africa's future (Smith, 2015). Based on my research and my own personal experience, I have found that Smith's several points are logically and supportively, but some are not. African should build the solar panel system because the solar panel system leads to benefit to resident's living standard, economy and environment.

Don’t waste time
Get a verified writer to help you with A Research on David Smith’s Points on the Advantage of Solar Power in Africa
Hire writer
$35.80 for a 2-page paper

One of Smith's strongest supporting claims is the increase of the resident's living standard. He stated that the construction of the solar plants has created 350 local jobs (Smith, 2015). Due to the unemployment rate decreased, the total income was increased. They can spend more in their living, thus, the living quality improved. In addition, the solar plant provided direct energy to the resident and it was cheaper than the main electrical power (Smith, 2015).

Result from getting direct energy, the supply of electricity became stably. I have several issues with this statement: solar plant can increase resident's living standard. According to the National Geographic Magazine, Hayden explained that solar lights enable the resident to work at night (Hayden, 2015). Ibrahim Kalungi and Godfrey Mteza, are Ugandan, they work in a motorcycle repair shop in Nbeeda, Uganda (Hayden, 2015). Thanks to the mechanics credit solar lights, it provided them a bright environment to work, they can work for a loner hours and earn more money.

Next, solar plant provided physical benefits to the residents too. Marshall, a professor of environmental engineering at the University of Minnesota, researched the negative effects for using soot and main electrical power (Hayden, 2015). He pointed out fumes from the coal-burning power plants will trigger heart attacks and lung damage (Hayden, 2015). However, solar plant will not cause this pollution. The risk of suffering from physical injuries will definitely decrease. One consequence of using solar plant is providing health and environmental benefits for the residents. Smith's point was proved by many data and daily examples, hence, using solar plant can increase resident's living standard.

Using solar plants has also affected the economy. Smith stated that the solar plants construction has increased Rwanda's generation capacity by 6% (Smith, 2015). In such a way, the government used less money and resources to create the same amount of energy. It was an advantage to the government, the cost of spending on energy can be reduced and put the effort on the other perspectives. According to the Cost of Solar, the solar panels are saving the government from now to the future (Cost of Solar, 2013). Like California, USA, it saved USD$34,260 average 20-year savings from using solar panel (Cost of Solar, 2013). There was a huge decreased in Hawaii. It saved USD$62,769. Definitely, the savings are amazing. Many people argued that the cost of building solar panel was expensive and the saving is just the balance of the cost. The Africa cannot save that much like USA. However, it is not true. Industry experts mentioned that the cost of converting sun rays to electricity was lessening continuously (Call, 2015). An engineer with Independent Green Technologies, called Chentnik. He built a solar powered home 10 years ago (Call, 2015). But, if the same project built today, the cost would be 90% cheaper than 10 years ago. Therefore, the cost of building solar project was cheaper from time to time. Energy Informative gave a description that the solar system can keep generating electricity after 25 years (Maehlum, 2015). Result in more savings and a higher return on investment, it is a tremendous economic effects and beneficial to the countries. Consequently, I strongly agree with Smith that using solar plant can bring economic benefits to Africa. Smith stated that Africa should build solar plants quickly. Because of the model of Rwanda, others Africa countries started to build solar power and relish the benefits (Smith, 2015).

However, he fails to consider the other uses of solar energy. If other countries just copy the solar project in Rwanda, the technology cannot develop well and the additional uses of solar energy will neglect. According to the Reality Today, an article written by Kerry, told people that there were a plenty other uses for solar energy (Kerry, 2015). Some of them are exceptional and cool. Let us take recycling as an example, solar energy can use to build trash and recycling compactors (Kerry, 2015). It can hold about five times more rubbish than the ordinary one, and the waste is reduced. So, there are more saving for the cities. Apart from recycling, transportation signaling devices, environmental monitoring equipment, water supply and solar oven are also additional uses of solar energy (Kerry, 2015). In addition, Schilleer, a writer for Co. Exist, highlighted that solar panels will become the next ubiquitous technology in the future (Schilleer, 2015). He mentioned solar panels becoming more efficient all the time, the uses are comprehensive and favorable (Schilleer, 2015). Therefore, I find that the Africa countries cannot just build similar solar project like Rwanda. They should develop the technology of solar energy and make good use of solar energy so as to get immense advantages from solar energy. Global warming is a hot issue, many countries and citizens concerned by this. On November, Paris organized the 2015 United Nations Climate Change Conference (Smith, 2015). After the conference, they decided to decouple GDP's growth from emissions growth. We are 6% of a country's generation capacity without adding any emissions (Smith, 2015). If the whole world can keep on developing renewable energy, it will help our earth and protect our precious environment together. Especially for Africa, many people may argue that they are poor and can't benefit from the solar energy. It was a wrong preconception. From the above evidence, showed that Africa can develop solar panel system and benefit from it.

A Research on David Smith's Points on the Advantage of Solar Power in Africa. (2021, Oct 31). Retrieved from http://envrexperts.com/free-essays/essay-about-research-david-smiths-points-advantage-solar-power-africa 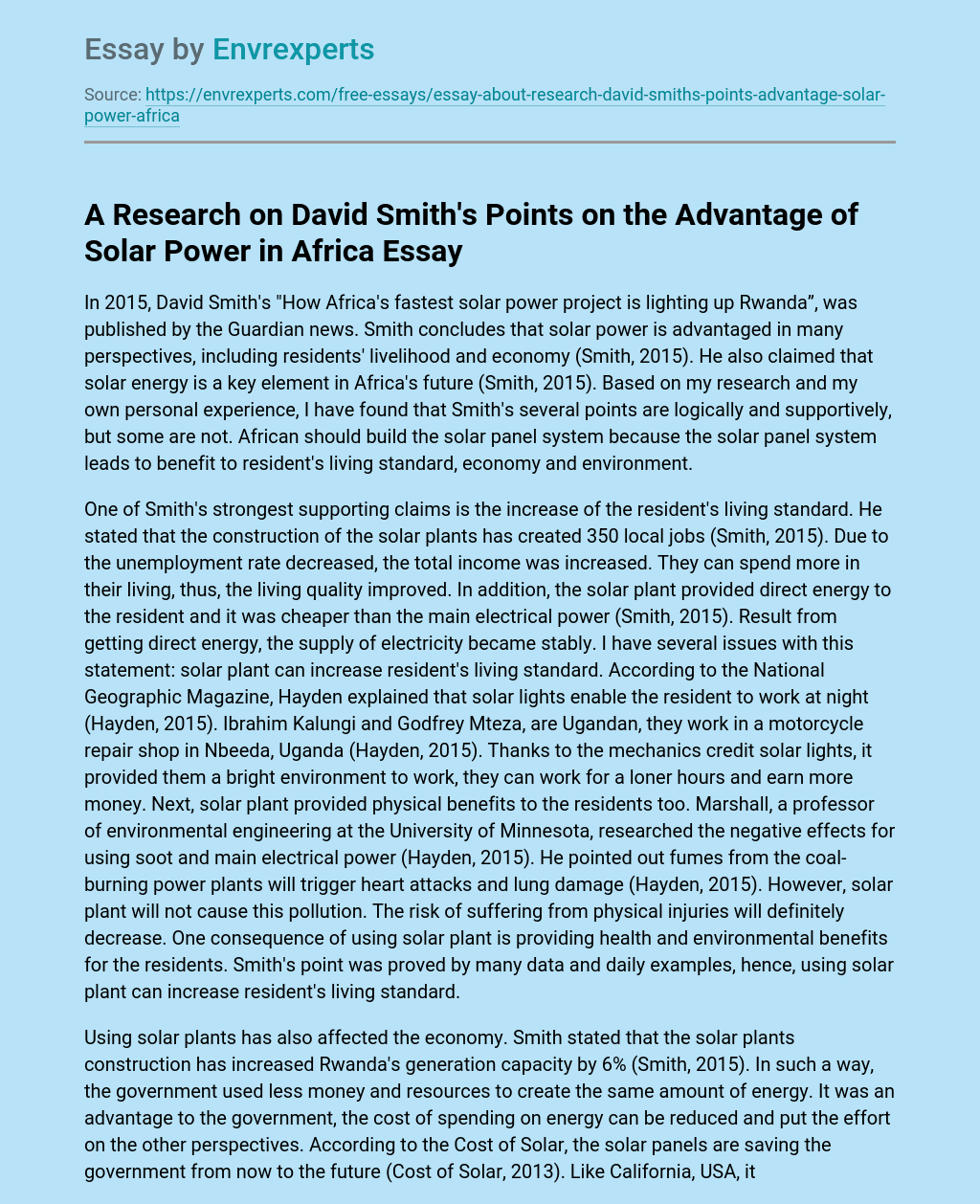