Research on Fish Population in the World's Ocean

The population of fish in the world's oceans has greatly decreased in the last few decades, and is projected to completely collapse in 2048 if current rates continue. Over 25% of fish stocks are being overexploited, and 52% are being exploited to their fullest, with new boats coming on all the time. This means that if left unchecked, over 75% of fish stocks will be severely crippled and will possibly never recover. Marine biologist Stephen Palumbi from Stanford says that "unless we fundamentally change the way we manage all the oceans species together, as working ecosystems, then this century is the last century of wild seafood.

Don’t waste time
Get a verified writer to help you with Research on Fish Population in the World’s Ocean
Hire writer
$35.80 for a 2-page paper

Boris Worm of Dalhouse University conducted a historical study fish levels from the past 1,000 years and found that over 91 percent of commercially important fish have more than halved their population from that time, with the majority of this decline happening after 1800. However, he thinks there is still hope for a rebound. Worm conducted another study focused on marine protected areas and found that after protection began, the areas showed a 23% increase in diversity and four times the amount of fish.

Some legislative ways of counteracting overfishing have been tried, with varying degrees of success. Canada enacted regulations limiting the amount of cod fished in Newfoundland, but it was too little, too late. By the time the laws were passed, the cod population in Newfoundland had all but disappeared, and the only fishermen left were looking for crabs, once thought to be nothing more than a nuisance.

The ARC Center for Excellence for Coral Reef Studies, the Wildlife Conservation Society, and other groups conducted a massive study in more than 40 coral reef fisheries in the Indian and Pacific Oceans on the effects of “co-management" –cooperative arrangements made between local fishers, governments, and conservation groups regarding how the reefs are to be fished– on the total fish populations and fishers' satisfaction. 17 scientists from 8 nations questioned local fishermen on their satisfaction with co-management and surveyed the surrounding waters for fish population. The results of the survey were overwhelmingly positive. Co-managed fisheries were less than half as likely to be critically overfished when compared to non-co-managed ones. More than half of the fishers reported their lives being improved by co-management, while only 9 percent reported their lives being worsened. Curiously, the wealthy in the fishery's community benefited the most, although it was not detrimental to the poor. "In other words, the main benefits tend to trickle up to the wealthy, rather than trickle down to the poor," Dr. Joshua Cinner of the ARC Center explains.

1. What is the largest amount of fish that can be harvested while maintaining a stable population?

The lobster fishing system in Australia depends on government scientists learning the maximum number of lobsters that can be harvested with no permanent damage to the ecosystem. In order to justly maintain order in fishing, we need to find out how many fish of every species can be caught each year to have them come back to a stable population level.

2. Is it possible to maintain a stable fish population while still letting all the fishers currently in the industry turn a profit?

It's possible that not all of the fishers could keep fishing and make a profit, while simultaneously letting the fish population grow back. This is a crucial question to ask, because it will determine the level of restriction on fishers that will need to be taken.

3. How can international standards be strictly applied to fishers so that the populations of fish do not disappear?

If fishers must be regulated because the fishing population cannot be supported by the fish population, someone is going to have to talk to someone about this. The question is: who? The United Nations tried at one point, but little attention was payed. It will be very hard to unify all nations and peoples in this effort to save the oceans, but it must be done. If it is not, then in fifty years all wild fish population will basically be gone.

Research on Fish Population in the World's Ocean. (2021, Oct 31). Retrieved from http://envrexperts.com/free-essays/essay-about-research-fish-population-worlds-ocean 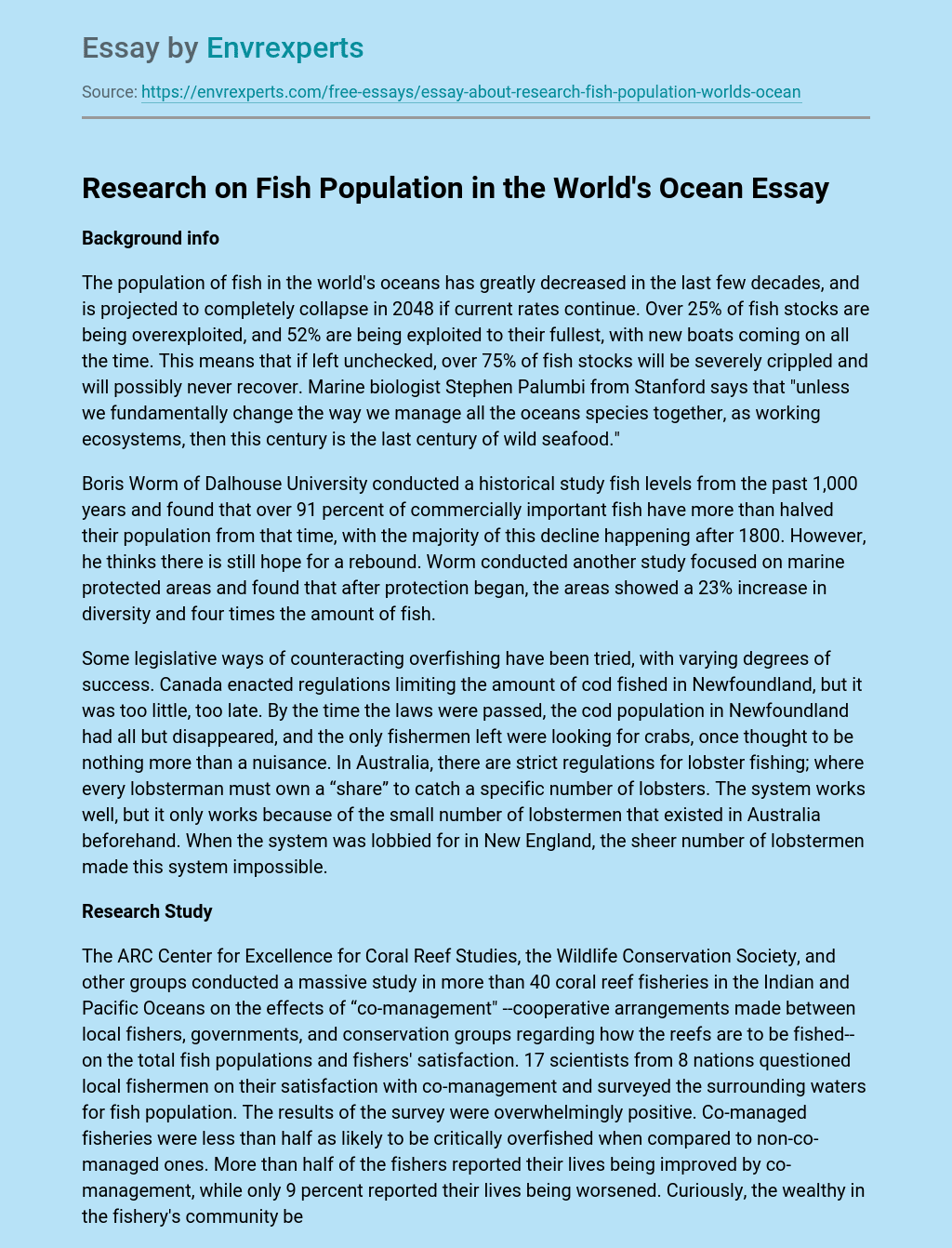