Research on new natural antioxidants and anti-inflammatory agents has increasing interestingly over the past few years as the production of reactive oxygen species (ROS) ,oxidative stress and inflammation has been linked to various chronic diseases including cancer, neurodegenerative diseases, cardiovascular disease, osteoporosis etc.

The external supply of antioxidants and anti-inflammatory agents can protect the body from the damaging effect of free radicals and in turn, one can prevent the occurrence of many diseases. Naturally occurring plant materials are being utilized for a long time in home remedies, drug products, and pharmaceutical industry and in cosmetic industries across the globe (reference).

Don’t waste time
Get a verified writer to help you with Research on New Natural Antioxidants and Anti-Inflammatory Agents
Hire writer
$35.80 for a 2-page paper

Despite present lifestyle has confined us from the natural life, earlier mankind was most dependent upon the natural resources for its very need but the present lifestyle was ignoring the rich natural heritage, this ignorance brings varoious health issues in modern lifestyle such as many old age problems, digestive disorders and most of the neurodegenerative diseases(reference).

However nowadays increase in the studies on the detrimental effect of synthetic medicine, food additives and preservatives used in the form of colouring agents on the human body has become more aware.

Simultaneously, researchers are now focusing on the beneficial effect of using natural resources in treating many ailments by isolation, characterization and utilization of plant molecules as potential disease-preventing agents and turned to explore the benefits of natural herbs for their nutritive, antioxidant ,antimicrobial and anti-inflammatory potential.

One such natural herb that is being studied is betel leaf. Piper betel also called as ‘Pan’ belongs to family Piperaceae, which is an evergreen and perennial creeper basically emerged from Malaysia and cultivated across the world.

Ethno-medicinal properties of the plant allow widely to used in south-east Asian countries. Socio-economic importance of piper betel has been elucidated with every sphere of human life including medicinal, cultural, social and religious, since from the ancient time piper betel is one of the most favorite herb used for chewing, were the fresh leaves wrapped with the areca nut , catechu and mineral slaked lime.

According to Ayurveda betel leaf is called by its Vedic name Saptasira which is used as a complimentary medicines for purifying blood, appetizer ,laxative and voice. The key fundamental of the piper betel leaf is a volatile oil also called as beetel oil (8), contains variety of biologically active components like eugenol, piperbetol, chavibitol, hydroxychavicol, piperol A and methylpiperbetol, hence Piper betel leaves have been used for various medicinal purposes including nutritive, insecticidal, antioxidant, antimicrobial, antitumor, neuroprotective, antidiabetic and anthelmintic activity(5,6,7) Western Ghats of India ‘Sahyadri’ (benevolent mountains),which is also known as hottest biodiversity hotspot, it covers (1.80.000km2) almost 6% land of India.

The region has more than 30% of plants species found in India , the average annual rainfall is 3456 mm which is one of the most rain fall regions in the country, temperature around summer season is 20º-24ºC. Northern Karnataka also known as ‘ karunadu’ covers semi-arid plateau ranges from 300 to 730 metres (980 to 2,400 ft) , major fields are covered by red sandy loams and black soil, annual rainfall ranges from 453-717mm,the mean daily temperature in summer season is around 31º-32ºC, the region is drained by the river krishna, ghataprabha, malaprabha, tungabhadra and bhima.

The present study was aimed to evaluate and compare the biological activities including preliminary phytochemicals analysis, antioxidant and anti-inflammatory potential of Betel Leaf extract from western ghats of karnataka (Mangalore and Kodagu) and northern region of karnataka(Hubballi and Chitradurga).Our study is also aimed at promoting the utilization of Betel Leaf in pharmaceutical and nutritive development.

Plant materialsFresh healthy betel leaves were collected from different regions of Karnataka (Western Ghats of Karnataka–Mangalore and Kodagu and Northern regions of Karnataka – Chitradurga and Hubballi). The leaves were properly washed in distilled water to remove dirt and dust. The Cleaned leaves were then shade dried for 24hrs at35-40ºC and finely powdered and stored in refrigerator until further use. Preparation of Betel leaf extracts The betel leaf powder was weighed and suspended in distilled water, which was kept overnight for stirring by using a magnetic stirrer. The solution was then filtered, poured into petriplate, then dried at room temperature to obtain the dry extract.

The extract obtained was then stored until further usage. Preliminary Phytochemical Screening: The extract collected from the western and northern regions of Karnataka were further subjected to various standard qualitative test method to determine the presence of various phytochemical components including alkaloids, flavonoids, terpenoids tannins and saponins. Test for Alkaloids: Hager’s Test: 1ml of the extract was mixed with 1ml of Hager’s reagent, presence of alkaloids indicated by yellow-colored precipitate .

Diphenylpicrylhydrazyl (DPPH) Assay: DPPH method is used for free radical scavenging activity. To 0.05ml of extract, 1ml of 0.5mM methanol solution is added thoroughly and kept in darkness at ambient temperature for one hour. The absorption of the mixture was measured at 515 nm . Ascorbic acid is used as a standard and radical scavenging activity was calculated by percentage inhibition formula.

%Inhibition = Absorbance of Control -Absorbance of Sample× 100 Absorbance of Control Inhibition of lipid peroxidation: Lipid peroxidation was measured according to Ruberto method. According to protocol 100μl of the extract is added to 1ml of egg homogenate, 1 ml of distilled water, 1ml of FeSO4 solution and incubated at room temperature for 30 minutes, soon after 2 ml of 20% acetic acid, 2 ml of TBA in 1.1% SDS, 1 ml of 20% TCA was added. Resultant solution was mixed thoroughly and allowed for incubation at 96 ̊C for 2 hours, Soon after cooling 5ml of butanol was added and mixture is allowed for centrifugation at 3000rpm for 10 minutes, topmost organic layer was collected and absorbance was measured at 530nm. Percentage inhibition formula is used to calculate the inhibition of lipid perxidation.

%Inhibition = Absorbance of Control -Absorbance of Sample× 100 Absorbance of Control Ferric reducing antioxidant power assay (FRAP Assay): This method is used to measure the reduction capacity of the plant extract. To 1 ml of extract , standard stock solutions of ascorbic acid were mixed with 3 ml of phosphate buffer (0.2M, pH 6.6), 3 ml of potassium ferric cyanide (1% W/V), 3 ml of trichloroacetic acid (TCA) (10% W/V) was added and the resulting solution was centrifuged at 3000rpm, Supernatant was collected mixed with 3ml of distilled water and 0.5ml of ferric chloride solution. The absorbance of the solution was estimated at 700 nm at a reaction time of 30min, the reduction influence of the extract was represented as the ascorbic acid equivalent (mg /g extract)

Human RBC Membrane Stabilization Method RBC suspension preparation : Human blood was collected and centrifuged at 3000 rpm. Then washed with the same volume of normal saline for 3times and reconstituted with normal saline as 10% v/v suspension. Heat induced haemolysis assay: To 1ml of plant extract, 1 ml of 10% RBC solution was added and the solution was heated at 56 ̊C for 10 minutes followed by centrifugation at 2500 rpm for 30 mintues and the supernatant was assembled and read at an absorption of 520 nm.

%Inhibition = Absorbance of Control -Absorbance of Sample× 100 Absorbance of Control Hypotonicity- induced haemolysis assay: To1 ml of plant extract, 2ml of hyposaline, 1 ml of phosphate buffer and 0.5ml of HRBC suspension was added and the solution was incubated for 37 C for 30 min followed by solution was centrifuged at 3000 rpm for 10 min, supernatent liquid was removed and the hemoglobin content was estimated at 560nm . The hemolysis percentage was calculated by following formula.

%Inhibition = Absorbance of Control -Absorbance of Sample× 100 Absorbance of Control Protease inhibition assay: To 2 ml of sample extract , 1 ml of trypsin is added and incubated at 37 ºc for 30mintues, then 2ml of casein is added and again the solution is allowed to incubation at 37 º for 3 hours ,after incubation add 3ml of TCA and centrifuge for 10 min at 9 ºC at 10000 rpm, supernatant was estimated at 420nm against buffer solution as a blank and Gallic acid as standard. The following formula was used to calculate the percent of protease inhibition.

% inhibition= 100- ((A1-A2)/A1) X100) Where A1 is the absorbance of control, A2 is the absorbance of sample Statistical Analysis: Data obtained quantitatively were analyzed statistically by calculating the mean of triplicates values and the results were represented by Mean ± standard error. 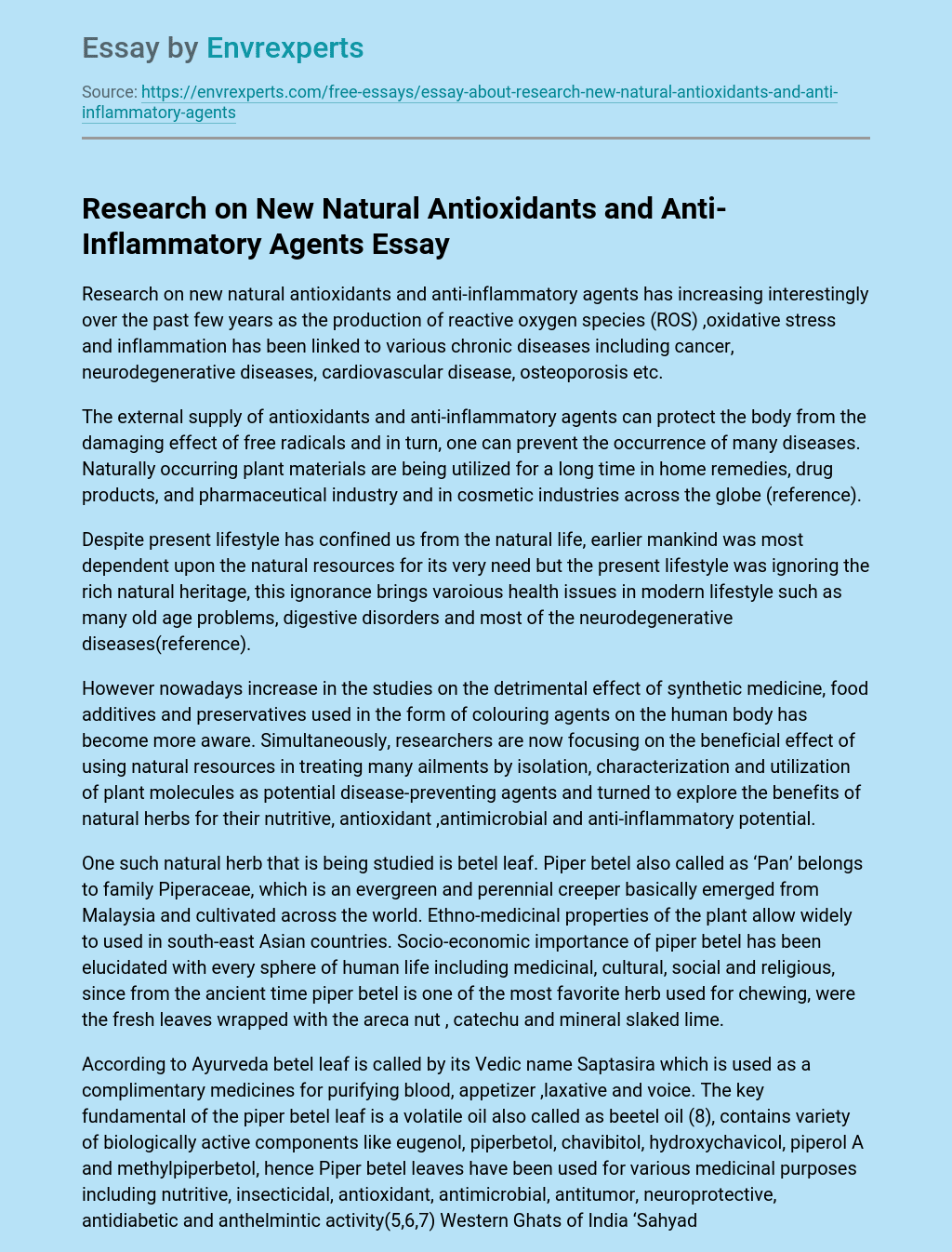